All articles from this author
Cathrine Frandsen


All articles from this author
Mikkel Fougt Hansen

One of the most important differences between magnetic nanoparticles and the corresponding bulk materials is that the magnetic dynamics differ substantially. The magnetic anisotropy energy of a particle is proportional to the volume. For very small particles at finite temperatures it may therefore be comparable to the thermal energy. This results in superparamagnetic relaxation, i.e., thermally induced reversals of the magnetization direction. For a particle with a uniaxial anisotropy energy E(θ) given by the simple expression in Equation 1, the superparamagnetic relaxation time τ is given by Equation 2 [1,2].

Here K is the magnetic anisotropy constant, V is the particle volume, θ is the angle between an easy axis and the (sublattice) magnetization vector, kB is Boltzmann’s constant and T is the temperature. The value of τ0 is in the range 10−13–10−9 s. When the superparamagnetic relaxation time is long compared to the timescale of the experimental technique, the instantaneous magnetization is measured, but in the case of fast relaxation, the average value of the magnetization is measured. The superparamagnetic blocking temperature (TB) is defined as the temperature at which the superparamagnetic relaxation time equals the timescale of the experimental technique used for the study of the magnetic properties.

Below TB, superparamagnetic relaxation can be considered negligible, but the magnetization direction may still fluctuate in directions close to the easy axes at θ = 0° and θ = 180°. These fluctuations have been termed “collective magnetic excitations” [3-5]. The magnetic excitations in a nanoparticle are illustrated schematically in Figure 1.

The magnetic dynamics well below the Curie or Néel temperature in both bulk materials and nanoparticles can be described by excitation of spin waves, but the spin wave spectrum of small particles is size-dependent and this can have a substantial influence on the temperature dependence of the magnetization in nanoparticles. In this paper we give a short review of the spin dynamics in non-interacting nanoparticles below the blocking temperature.

First, we consider a ferromagnetic or ferrimagnetic material with cubic crystal structure and lattice constant a0. The dispersion relation for spin waves, i.e., the spin wave energy

Here ωq is the angular frequency of a spin wave with wave vector q, J is the exchange constant, S is the atomic spin, g is the Landé factor, μB is the Bohr magneton, and BA = 2K/M0 is the anisotropy field, where M0 is the saturation magnetization. If surface effects are negligible, the allowed values of the wave vector in a cubic nanoparticle with side length d are given by [7-10]

In a macroscopic crystal, the energy difference between adjacent spin wave states is small and the quantized states are well approximated by a continuous distribution of energies. Furthermore, the magnetic anisotropy is usually neglected in the calculations [9,10]. In ferromagnetic and ferrimagnetic materials at low temperatures, spin wave excitations result in a temperature dependence of the magnetization given by [10,11]

where υ is an integer, which equals 1, 2, or 4 for simple cubic, bcc or fcc lattices, respectively. Equation 5 is known as the Bloch T3/2 law.

In a nanoparticle, the value of d is small, and according to Equation 3 and Equation 4 this results in large energy gaps between spin wave modes with different q-values. The energy gap between the n = 0 and n = 1 modes is given by [7]

This energy gap can be on the order of 10 K or larger.

In the spin wave modes with n > 0, the atomic spins precess such that adjacent spins form a small angle with each other. However, in the uniform (n = 0) spin-wave mode the atomic spins precess in unison, as illustrated in Figure 2. Due to the energy gap, given by Equation 6, the uniform mode is predominant in nanoparticles at low temperatures [8]. In the uniform mode, q = 0, and the energy of a particle in an excited uniform precession state is governed by the magnetic anisotropy and is given by

At low temperatures, the average number

The magnetic dynamics in nanoparticles at low temperatures can be described in terms of excitations of the uniform mode in combination with transitions between excited states with different values of n0, i.e., with different precession angles. These dynamics have also been termed “collective magnetic excitations” [4,5]. The contribution from the uniform mode to the temperature dependence of the magnetization of bulk materials is negligible, because of the dependence of the magnetization on the volume in Equation 9.

where E(θ) is given by Equation 1, and the latter approximation is valid at low temperatures. The linear temperature dependence of the magnetization in nanoparticles was first observed by Mössbauer spectroscopy studies of magnetite (Fe3O4) nanoparticles [3], but it has later been studied in nanoparticles of several other magnetic materials.

where B0 is the saturation hyperfine field. Figure 3 shows the temperature dependence of the magnetic hyperfine field of three samples of magnetite (Fe3O4) nanoparticles with different average sizes [3]. From the slopes of the fitted straight lines one can estimate the values of the magnetic anisotropy constants K. It was found that K increases with decreasing particle size. This is in accordance with the expected increase of the surface contribution to the total magnetic anisotropy [14]. A similar size dependence of the magnetic anisotropy constant has been found by Mössbauer studies in other nanoparticles, for example, maghemite (γ-Fe2O3) [15], hematite (α-Fe2O3) [16] and metallic iron (α-Fe) [17].

If a sufficiently large magnetic field B is applied, such that B >> BA, the anisotropy field in Equation 7 and Equation 8 should be replaced by the applied field. This leads to a temperature and field dependence of the magnetization given by [18]

which also can be derived as the high-field approximation to the Langevin function [18]. The temperature and field dependence of the magnetic hyperfine field is given by an equivalent expression.

Anisotropy fields on the order of 0.1 T correspond to ε0 ≈ 0.01 meV. Using a neutron spectrometer with an energy resolution on the order of 0.1 meV, the satellite peaks are therefore difficult to observe, but they may be visible if a large magnetic field B is applied, because they are then shifted to higher energies [20]. For B >> BA, the energy is approximately given by an expression similar to Equation 13 with BA replaced by B. The relative intensity of the satellite peaks is for M0VB >> kBT given by [20]

In Figure 4, data obtained from inelastic neutron scattering studies of 4.0 nm maghemite particles [20] is shown. Figure 4a demonstrates that the energy of the satellite peaks varies almost linearly with the magnitude of the applied magnetic field, indicating that the anisotropy field is almost negligible for B > 1 T. By a detailed analysis of the data, BA was estimated to be on the order of 0.3 T. Panels (b) and (c) in Figure 4 show the relative area, Rin, of the satellite peaks as a function of the applied field at 300 K and as a function of temperature at B = 2 T, respectively, and the lines are fits by using Equation 14.

As an example, Figure 5 shows the temperature dependence of the magnetic hyperfine field of 20 nm hematite nanoparticles [24]. From the slope of the linear fit of the data for the non-interacting particles, the value of the magnetic anisotropy constant can be estimated with Equation 11.

The energy difference between neighboring precession states in the uniform (q = 0) mode is given by [6,10,19,25]

where the last approximation is valid for BE >> BA. Because the exchange fields of typical antiferromagnetic materials are much larger than the anisotropy fields, the energy, ε0, can be much larger than in ferro- and ferrimagnetic nanoparticles and can more easily be resolved in inelastic neutron scattering experiments in zero applied field [19,21,22].

Figure 6 shows inelastic neutron scattering data from a sample of 15 nm α-Fe2O3 nanoparticles. The data were obtained from neutrons, scattered at the scattering vector with Q = 1.50 Å−1, corresponding to the purely magnetic hexagonal (101) peak [21]. Data obtained in zero applied field as a function of temperature are shown in Figure 6a, whereas Figure 6b shows data obtained in different applied magnetic fields at 200 K. In Figure 6a, inelastic satellite peaks at energies ±ε0 ≈ ±1.1 meV are seen on both sides of the intense quasielastic peak. As in the data for ferrimagnetic maghemite (Figure 4) the relative area of the inelastic peaks increases with increasing temperature. At low temperatures the relative area of the inelastic peaks in zero applied field is given by [23]

When magnetic fields are applied at 200 K, the inelastic peaks are shifted to higher energies, and their relative intensity decreases as for ferrimagnetic maghemite nanoparticles (Figure 4).

In antiferromagnetic materials, excitation of the uniform mode has interesting consequences. The spins of the two sublattices precess around the easy axis in such a way that they are not strictly antiparallel, but form different angles, θA and θB, with respect to the easy axis. This is illustrated in Figure 7. For BA << BE the two angles are related by [29]

Therefore, the magnetic moments of the two sublattices do not cancel, and the nanoparticle has a net magnetic moment, which increases with increasing temperature. The contribution to the initial susceptibility from this thermoinduced magnetization is given by [30]

After the discovery of superparamagnetism much of the research in the field of magnetic nanoparticles has focused on superparamagnetic relaxation while the magnetic dynamics below TB has attracted less attention. However, the quantization of the spin-wave spectrum, especially the large energy gap between the lowest (q = 0) excitation state and the states with q > 0, results in a predominance of the uniform mode in nanoparticles. This results in a linear temperature dependence of the magnetization and the magnetic hyperfine field, in contrast to the Bloch T3/2 law in bulk materials. Mössbauer spectroscopy is useful for studies of the temperature dependence of the magnetization of nanoparticles, whereas inelastic neutron scattering studies can give information on the energy of the uniform excitations.

© 2010 Mørup et al; licensee Beilstein-Institut.
This is an Open Access article under the terms of the Creative Commons Attribution License (http://creativecommons.org/licenses/by/2.0), which permits unrestricted use, distribution, and reproduction in any medium, provided the original work is properly cited.
The license is subject to the Beilstein Journal of Nanotechnology terms and conditions: (http://www.beilstein-journals.org/bjnano) 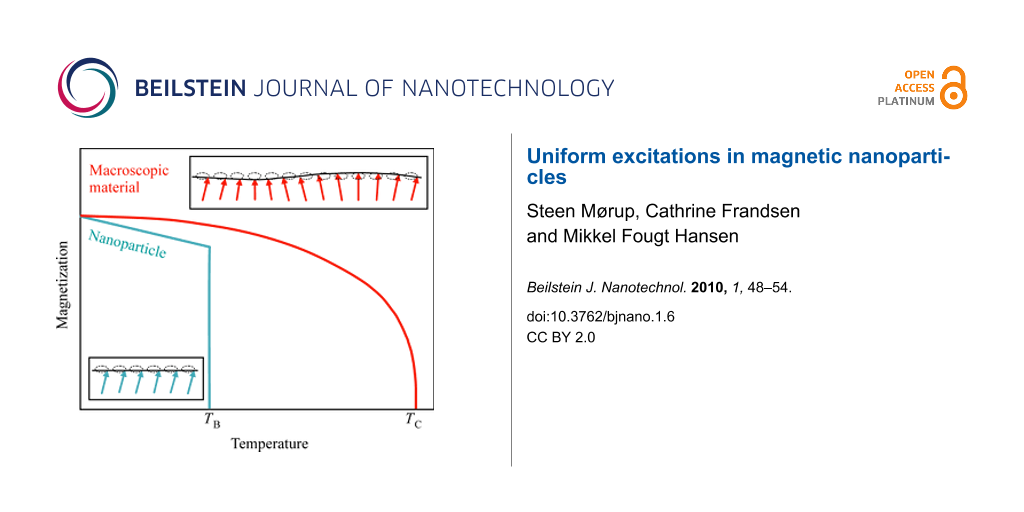