All articles from this author
Min Zhang


All articles from this author
Yan Liu

In this paper, we employed first-principles calculations and chose Si and S atoms as impurities to explore the concentration-dependence of electronic structure and magnetism of doped phosphorene. It is found that the stability of doped phosphorene improves continuously with increasing the supercell size and decreasing impurity concentration due to the reduction of deformation. The stability of pristine phosphorene is invariable. The band structures of Si- and S-doped phosphorene without spin polarization always show metallic states suggesting the bandgap is insensitive to the in-plane size of the supercell and the dopant content. However, the results are fairly different once the spin polarization is taken into account. The band structures of Si- and S-doped phosphorene become those of a semimetal or a semiconductor as the in-plane size of the supercell goes up to 4 × 4 × 1 or 5 × 5 × 1 and the concentration goes down to 1.56% or 1%, respectively. In addition, we also observe that all Si- and S-doped phosphorene are magnetic, except for the Si-doped phosphorene with 2 × 2 × 1 supercell and a dopant content of 6.25%. The magnetic moment induced by 3p orbit–spin splitting increases with the in-plane size of the supercell, and the largest magnetic moment can be found in 4 × 4 × 1 and 5 × 5 × 1 supercells. These findings offer an alternative method to tune the magnetism and electronic structure of black phosphorene, which might be beneficial for its application in future spintronic devices.

Substitutional doping has been proven to be an effective and promising approach to tune the electronic and magnetic properties of low-dimensional materials [14-16]. For instance, Bai et al. [17] theoretically tailored the electronic and magnetic properties of arsenene between non-magnetic and dilute magnetic by doping with Ge atoms. More importantly, it was experimentally demonstrated that substitutional doping of TMDs could be achieved by filling the vacancies observed in CVD-grown monolayer TMDs [18]. Liu et al. [19] prepared epitaxial copper-doped ZnO films and observed that the substitution of Cu for Zn and the presence of strong Cu–Zn–O bonds are necessary for the ferromagnetism of the ZnO films. Likewise, substitutional doping can also be used for manipulating the electronic and magnetic properties of phosphorene [20-23]. Zheng et al. [24] focused on the properties of phosphorene doped with non-metal atoms in a 6 × 6 × 1 supercell, corresponding to a concentration of 0.70%. They predicted that the C, Si, O, S and Se atoms could induce a magnetic state in phosphorene and these doped phosphorenes could be realized through experiments. Yu et al. [25] examined the doping of transition-metal atoms in phosphorene when the supercell and the impurity concentration were 4 × 4 × 1 and 1.56%, respectively. They found that the V, Cr, Mn and Fe impurities could change the magnetic properties of phosphorene to a dilute magnetic state. Wang et al. [26] tuned the electronic structure of phosphorene by doping with period-4 elements when the supercell was 2 × 2 × 1 and the impurity concentration was 6.25%. They observed that all doped phosphorenes were stable, with Ca-, Ge-, and Se-doped phosphorene exhibiting metallic states.

Figure 1a shows curves of the bond-length deviations d1 and d2 as functions of the in-plane size of the supercell. The computed in-plane and out-of-plane bond lengths of pristine phosphorene, 2.18 and 2.25 Å [27,28], were taken as reference for d1 and d2, respectively. It is obvious that the deviations of both Si- and S-doped phosphorene lessen with increasing size of the supercell, which is caused by the reduced dopant content. Especially, as the in-plane size of the supercell changes from 2 × 2 to 3 × 3, the deviations of all bonds drop suddenly because of the change in impurity concentration from 6.25% to 2.78%. Interestingly, the deviation of the in-plane bond in S-doped phosphorene is negative in the small supercell suggesting an enhancement of the bond strength, which should be a result of the stronger orbit coupling between S and P atoms in the plane. In addition, the formation energy Ef used to describe the stability of doped phosphorene is given in Figure 1b. The formation energy Ef was calculated as follows:

Before investigating the magnetic properties, the electronic structures of the Si- and S-doped phosphorenes were calculated, first without considering spin polarization. The results are shown in Figure 2 where the magenta lines represent the impurity levels and the Fermi level is shifted to zero. The impurity states induced by the Si and S atoms always appear within the bandgap of phosphorene, and change the electronic properties of phosphorene from a semiconducting state to a metallic state. The bandgap of doped phosphorene without spin polarization is insensitive to the in-plane size of the supercell and the impurity concentration in the doped system. This phenomenon is consistent with the conclusions obtained by Yu et al. [29] and Wang and co-workers [30]. However, there is the big shortcoming that magnetism and electron spin are not taken in account. Hence, the calculated band structures may be inaccurate.

In order to identify the magnetism of Si- and S-doped phosphorenes, the energy difference ΔEsp was calculated as follows [24-26]:

In order to denominate donor and acceptor in the doped phosphorenes, the charge density difference Δρ (CDD) is computed as follows [26]:

where ρtot, ρvP, and ρd are the electron density of doped phosphorene, black phosphorene with one vacancy, and a dopant atom. The obtained results of Si- and S-doped phosphorenes are shown in Figure 6. In Figure 6, charge accumulation is depicted by the gold isosurface, while the cyan isosurface represents charge depletion. The isosurfaces are separated by ±0.04 e/Å3. From Figure 6, one can find clearly that the Si atom donates electrons to three neighboring phosphorus atoms. The S atom accepts electrons coming from two neighboring in-plane phosphorus atoms, which is corroborated by the short bond length and strong bond strength of in-plane bonds in S-doped phosphorene. Unexpectedly, the density of external charges around the impurity atom decreases with increasing supercell due to the enhancement of volume, which leads to the differences of magnetism and electronic structure.

We have used first-principles calculations and changed the supercell size to estimate the impact of the dopant concentration on the electronic and magnetic properties of doped phosphorene. According to calculations, we find that the deformation decreases monotonously with the increase in-plane size of the supercell and the reduction of impurity concentration, resulting in an improvement in structural stability. We found the all Si- and S-doped phosphorenes are magnetic, except the Si-doped phosphorene with 2 × 2 × 1 supercell with a dopant content of 6.25%. The magnetic moment induced by 3p orbit–spin splitting increases with increasing supercell size and decreasing impurity concentration. Consequently, the largest magnetic moment can be found in 4 × 4 × 1 and 5 × 5 × 1 supercells. When spin polarization is taken into account, the bandgaps of the Si- and S-doped phosphorenes widen in the 4 × 4 × 1 and 5 × 5 × 1 supercells with concentrations of 1.56% and 1%, respectively, so that the Si- and S-doped phosphorenes become semimetals or semiconductors. This phenomenon suggests that the magnetism needs to be identified before the calculations of electronic properties for more accurate electronic information. The impurity concentration has a strong influence on the magnetic and electronic properties of black phosphorene. These findings may contribute to the development of next-generation spintronic devices.

We chose the Si and S atoms as impurity atoms to establish doped phosphorene according to the model shown in Figure 7 because of their positions in the periodic table. In Figure 7, the purple balls represent phosphorus (P) atoms, while the red ball represents the dopant atom (D). The in-plane bond between the D atom and the P atoms is represented by d1, whereas the out-of-plane bond is represented by d2. The in-plane and out-of-plane angles between two D–P bonds are labeled as θ1 and θ2, respectively. In addition, the different sizes of supercell corresponding to different impurity concentrations are marked by olive, gold, orange and blue dashed squares. We used the deviation of d1 and d2 between pristine phosphorene and doped phosphorene to describe the deformation induced by doping.

All density function theory (DFT) calculations using first principles were performed in the Cambridge Sequential Total Energy Package (CASTEP) [26,28,31]. The investigated supercell sizes were 2 × 2 × 1, 3 × 3 × 1, 4 × 4 × 1, and 5 × 5 × 1 containing 16, 36, 64, and 100 atoms, corresponding to a dopant content of 6.25%, 2.78%, 1.56%, and 1%, respectively. To suppress the interaction between adjacent layers, a 15 Å vacuum distance was imposed along the z-axis. Each doped structure was optimized self-consistently with a cut-off energy of 500 eV until the convergence criterions were satisfied. In terms of our convergence criterions, the tolerance of energy and the Hellman–Feynman force per atom were minimized to less than 10−6 eV and 0.01 eV/Å, respectively. To choose a proper exchange–correlation functional in the energy calculations, the band structure of monolayer phosphorene was calculated by HSE06 or the generalized gradient approximation (GGA) of the Perdew–Burke–Ernzerhof functional for solids and surfaces (PBEsol). The results are shown in Figure 8 [26]. The bandgap of phosphorene calculated with HSE06 (1.54 eV) was larger and closer to the experimental value [9,12] than that calculated with the GGA of PBEsol (0.85 eV). Although the GGA of PBEsol underestimates the bandgap of phosphorene, numerous studies have announced that the dispersions of bands near the Fermi level predicted by HSE06 and the GGA of PBEsol are similar [32-34]. Moreover, GGA of PBEsol needs much less resources than HSE06. To balance the accuracy of calculation results and the resources required, we chose the GGA of PBEsol with spin polarization as norm-conserving exchange–correlation functional, and an 8 × 10 × 1 Monkhorst–Pack k-point mesh was used in the irreducible Brillouin zone.

This research is supported by the Fundamental Research Funds for the Central Universities, and innovation Fund of Xidian University.

Structural and electronic properties of SnO2 doped with non-metal elements

© 2019 Wang et al.; licensee Beilstein-Institut.
This is an Open Access article under the terms of the Creative Commons Attribution License (http://creativecommons.org/licenses/by/4.0). Please note that the reuse, redistribution and reproduction in particular requires that the authors and source are credited.
The license is subject to the Beilstein Journal of Nanotechnology terms and conditions: (https://www.beilstein-journals.org/bjnano) 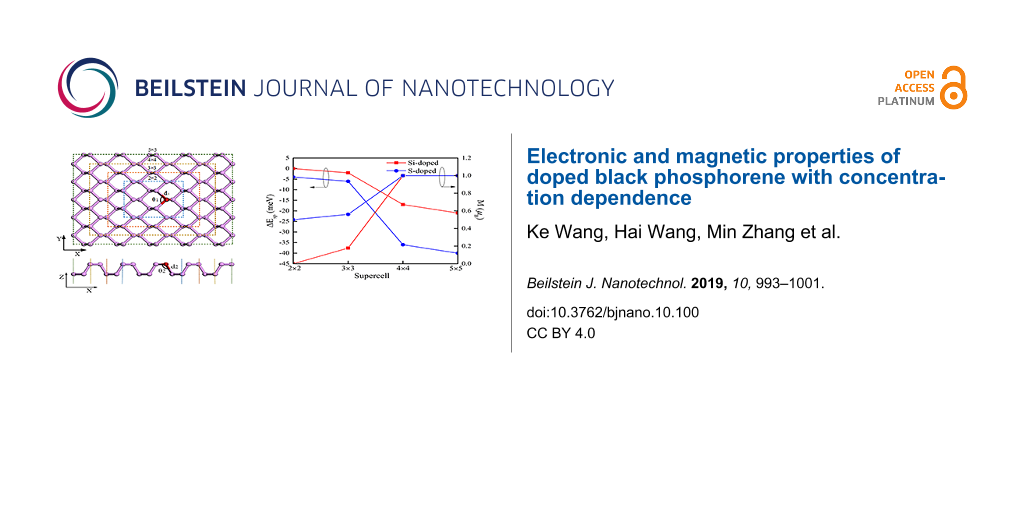