All articles from this author
Lei Wei


All articles from this author
Jian-Hua Xu


All articles from this author
Hua-Jian Yu


All articles from this author
Yan-Yan Hu


All articles from this author
Hua-Di Zhang


All articles from this author
Xu-Ping Wang


All articles from this author
Bing Liu


All articles from this author
Cong Zhang


All articles from this author
Qing-Gang Li

Currently, the most popular fabrication model of white light-emitting diodes (WLEDs) is to combine blue chips with yellow Y3Al5O12:Ce3+ phosphors, which has the disadvantages of low colour-rendering index (CRI) and high correlated colour temperature (CCT) [1,2]. At the same time, this type of WLEDs has the advantages of long lifetime, eco-friendliness, high luminous efficiency and low energy consumption, which helps to mitigate two serious issues in the world, namely ecological crisis and energy dilemma. As a result, various attempts have been made to address the shortcomings in this type of WLED. To date, two common methods are red-light compensation and the red-shift of Ce3+ emission band in Y3Al5O12. Red-light compensation is generally achieved by adding a red-emission phosphor, such as Eu2+-doped materials [3], materials doped with trivalent lanthanide ions (e.g., Eu3+ and Sm3+) [4-8], Mn4+-doped materials [9-12], or Ce3+/Cr3+-co-doped Y3Al5O12 [13,14]. The red-shift of the Ce3+ emission band in Y3Al15O12 is achieved, in general, through ion substitution, such as Ca2+–Mg2+–Si4+ [15], Si4+–N3− [16,17], Mg2+–Si4+/Ge4+ [18-20], or Gd3+ [21,22].

Under excitation at 460 nm, Tb2.96−xCe0.04GdxAl5O12 phosphors show the characteristic emission band of Ce3+, as shown in Figure 3. One feature is the red-shift of the Ce3+ emission with increasing Gd3+ concentration and the other is the decrease of emission intensity with increasing Gd3+ concentration. The emission band of the Tb2.96Ce0.04Al5O12 phosphor peaks at about 554 nm. For the Tb2.71Ce0.04Gd0.25Al5O12 phosphor, the peak wavelength of the emission band shifts to 610 nm. It is well known that the emission of Ce3+ depends on the crystal field splitting. The crystal field splitting can be calculated through the following equation:

where 10Dq is the crystal field splitting parameter, Z is the anion charge, e is the electron charge, r is the radial distance of the d orbital from the nucleus, and R is the bond length [30,31]. Gd3+ has a larger ionic radius than of Tb3+. As a result, the Ce3+–O2− bond length in Tb3Al5O12:Ce3+/Gd3+ decreases when Tb3+ ions are replaced by Gd3+ ions. The decrease of the Ce3+–O2− bond length results in an increase of the crystal field splitting, which in turn leads to the red-shift of the Ce3+ emission. This result is in accordance with the excitation spectra. Moreover, the substitution of Tb3+ with Gd3+ causes lattice deformation and generates numerous structural and chemical defects, which results in a decrease of the Ce3+ emission intensity [32]. The decay characteristics of the synthesized Tb2.96−xCe0.04GdxAl5O12 phosphors were also investigated. Figure 4 gives the decay curves of Tb2.96−xCe0.04GdxAl5O12 phosphors. The decay curves of the Ce3+ emission fit well with the second-order exponential formula

where I is the emission intensity, A1 and A2 are constants, t is the time, and τ1 and τ2 are the rapid and the slow lifetime, respectively. The average lifetime (τ*) can be calculated through

Generally, the colour stability of a LED device can be examined through measuring the colour deviation under different driving currents [33]. Figure 7 shows the electroluminescence spectra of a WLED containing the Tb2.81Ce0.04Gd0.15Al5O12 phosphor under forward-bias currents of 5, 10, 20, 30, 40, and 50 mA. It can be seen that the intensity of the WLED increases with increasing current. Moreover, the shape and the peak of the bands corresponding to the LED chip and phosphor are consistent under different driving currents. This suggests the outstanding colour stability of the fabricated WLEDs.

We synthesized a series of Tb2.96−xCe0.04GdxAl5O12 phosphors through solid-state reactions. The doping with Ce3+/Gd3+ ions does not lead to a phase change of the Tb3Al5O12 host but induces a slight increase of cell volume. Under excitation at 460 nm, the Tb2.96Ce0.04Al5O12 phosphor shows the characteristic emission band of Ce3+ with a peak wavelength of about 554 nm. The co-doped Gd3+ ions lead to a red-shift of the Ce3+ emission band and the red-shifts become larger with increasing Gd3+ concentration. Due to the larger ionic radius of Gd3+ compared with Tb3+, the substitution of Tb3+ with Gd3+ decreases the bond distance between Ce3+ and O2−, which leads to an increase of crystal field splitting. The increasing crystal field splitting induces the red-shift of the Ce3+ emission. The longer peak-wavelength of the Ce3+ emission for Gd3+ co-doped phosphors leads to a warmer light in WLEDs. The fabricated WLEDs by integrating a blue LED chip and the Ce3+/Gd3+ co-doped Tb3Al5O12 phosphors show outstanding colour stability when they are driven under different currents.

© 2019 Yang et al.; licensee Beilstein-Institut.
This is an Open Access article under the terms of the Creative Commons Attribution License (http://creativecommons.org/licenses/by/4.0). Please note that the reuse, redistribution and reproduction in particular requires that the authors and source are credited.
The license is subject to the Beilstein Journal of Nanotechnology terms and conditions: (https://www.beilstein-journals.org/bjnano) 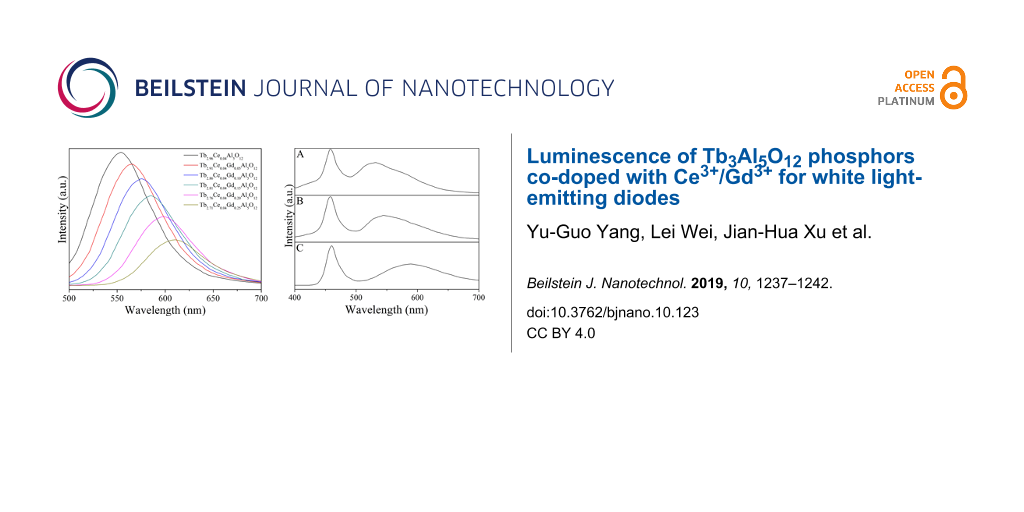