All articles from this author
Yongjun Jian


All articles from this author
Yingchun Zhao


All articles from this author
Long Chang


All articles from this author
Quansheng Liu

Micro- and nanofluidic devices [1] have a wide range of applications in science and engineering, e.g., liquid pumping and energy conversion. In many of these devices, a pressure gradient is often used to manipulate the transport of electrolyte solutions in nanochannels, at least one characteristic dimension of which is below or of the order of 100 nm. The decrease of length scale of the channel leads to the emergence of new phenomena different from those in macroflow, such as the electrokinetic effect and boundary slip. When wall surfaces are brought into contact with an electrolyte solution, most of them acquire surface electric charge [2] due to ion adsorption and acid–base reactions [3]. The charged surface attracts counterions and repels co-ions in the nearby electrolyte solution, and hence an electric double layer (EDL) with net charge density forms in the nearby electrolyte solution. The flow of electrolyte solution actuated by the pressure field generates both a streaming current and a streaming potential. The streaming current in a nanochannel can offer a simple and effective way to convert the mechanical energy to electric energy [4]. The streaming potential induces an electric field called streaming electric field. Acting on the net mobile charge in EDL, the steaming electric field generates an electric force in the opposite direction of the flow. The flow rate is decreased under the action of the electric office. This effect is called electroviscous effect.

The electrokinetic energy conversion efficiency and the electroviscous effects of micro-and nanoscale flows have been widely studied under the no-slip assumption [4-10]. Among these works, Bhattacharyya et al. [7] discussed the electroviscous effect on a time-periodic pressure-driven flow through a circular microtube and have shown that the Onsager’s principle of reciprocity is applicable for this flow. The electrokinetic energy conversion efficiencies of time-periodic pressure-driven no-slip flows of a viscoelastic fluid between two parallel plates and in a circular tube were, respectively, by Bandopadhyay and Chakraborty [8] and Nguyen and co-workers [10]. The no-slip flow of a Maxwell fluid in a soft nanochannel and the electrokinetic energy conversion efficiency were studied by Jian and co-workers [9].

In nanoscale flow, the boundary slip effect becomes significant because the ratio between slip length and channel height becomes considerable large. For example, the velocity distribution for Stokes slip flow through a circular tube [11,12] is

where a is the radius of the circular tube and b0 is the Navier slip length. The last term 2b0/a becomes considerable large for nanoscale flow. Many researchers investigated the influences of the surface charge and the boundary slip on micro- and nanoscale flows [11-17]. Among these, Yang and Kwok [11,12] studied time-periodic pressure-driven flows in circular and parallel-plate microchannels with electrokinetic effect and boundary slip condition. Goswami and Chakraborty [17] investigated electrokinetic energy conversion through streaming effects in time-periodic pressure-driven nanochannel flows with boundary slip.

In the following sections, the influences of the surface charge-dependent slip on time-periodic pressure-driven flow and electrokinetic energy conversion in a circular nanotube are studied. To our knowledge, so far no author discussed this problem for the case of a time-periodic flow. Firstly, using the separation of variables method, the energy conversion efficiency and the analytical solutions to the governing equations are obtained. Secondly, the electroviscous effect and the effects of surface charge-dependent slip on the velocity and the energy conversion efficiency are discussed. Finally, we make our concluding remarks.

We consider a time-periodic pressure-driven flow of a symmetric binary electrolyte in a circular nanotube with surface charge-dependent slip and with radius a using a cylindrical coordinate system (r, θ, z) where the z-axis is taken to coincide with the central axis of the nanotube, as shown in Figure 1. In the present study, the radius ranges from 37.5 to 100 nm, and the bulk ionic concentration varies from 1 to 100 nm. The corresponding Debye length varies from 0.96 to 9.63 nm [29]. In this case, the overlap of EDLs is mild, and hence the electric potential within the nanotube can be described by the Poisson–Boltzmann equation [30]. In addition, the continuum hydrodynamics for fluid flow is valid because the Debye length and the radius considered here are much larger than the mean free path of the liquid in the nanotube [31]. When the boundary surface of a nanochannel is molecularly smooth, the surface asperity barriers do not exist and, consequently, boundary slip can occur at the interface between the liquid and the boundary of the nanochannel [20]. Assume that the boundary slip b depends on the surface charge density σs [18,22,25]:

where b0 is the original slip length independent of surface charge density, α ≈ 1 is a numerical factor, d is the equilibrium distance of the Lennard–Jones potential, e is the elementary charge, lB = e2/(4πεkBT), kB is the Boltzmann constant, ε is the permittivity of the electrolyte solution and T is the absolute temperature [19,25].

where n0 is the bulk ionic concentration and z is the valence of ions. Taking the Debye–Hückel approximation for low zeta potential, i.e., sinh(ezφ/(kBT)) ≈ ezφ/(kBT), and utilizing Equation 3 and Equation 4 we obtain the linearized Poisson–Boltzmann equation

where ρe = −εκ2φ is used, ζ is the zeta potential, and κ = [εkBT/(2z2e2n0)]−1/2 is the Debye–Hückel parameter and represents the inverse of the characteristic EDL thickness.

A unidirectional flow along the z-direction is generated by a time-periodic pressure gradient cos(ωt)dp0/dz independent of position, where ω is the frequency, and t is the time. From the continuity equation, we find ∂u/∂z = 0 and so u depends on the variables r and t. Therefore, the momentum balance equations for the incompressible viscous Newtonian liquid becomes

where ρ is the mass density, μ is the dynamic viscosity, Es is the streaming electric field and p = cos(ωt)p0 is the time-periodic pressure. The boundary conditions are

where the slip length b is given by Equation 2.

According to the charge conservation law, the total surface charge should be equal to the net charge in the fluid. Therefore

where L represents the length of the nanotube. From Equation 3, Equation 9 and the boundary condition in Equation 6, we obtain

The streaming current through the channel is equal to

The streaming electric field Es generates a reverse conduction current Ic. Due to the electric neutrality of the fluid inside the nanotube, the net electric current over the cross section of the nanotube is zero, i.e.,

where σ = 2z2e2Dn0/(kBT) is the electric conductivity and D is the diffusivity of ions in the electrolyte. From the equation Is + Ic=0, the streaming electric field Es can be obtained in the form:

Then, we use Equation 15 and Equation 16 to obtain the dimensionless governing equations and their boundary conditions:

where λ = εζ2/(µD), B2 = iRe, and Re = ωa2ρ/μ is the nondimensional frequency. Using numerical methods, Erickson and Li [32] verified that the linearized Equation 17 and Equation 19 are also valid for large zeta potential values up to 100 mV.

Analytical solutions of the governing equations

From the boundary value problem in Equation 17 and Equation 18, we obtain

where I0 is the zeroth-order modified Bessel function of the first kind. The slip length is given by Equation 11 and Equation 21. From Equation 19 and Equation 20, the velocity distribution is obtained as

is the complex velocity amplitude without considering the electroviscous effect.

is the complex electric field amplitude in which the electroviscous effect is not considered.

The dimensionless flow rate normalized by a2uref is given by

The mechanical energy of the pure pressure-driven flow is converted into electric energy [6] when the streaming current (Is) and the streaming electric field (Es) are generated. The energy conversion efficiency η [10]can be expressed as:

where ⟨·⟩ represents the time average over one cycle [0, 2π/ω], and

is the flow rate of the pure pressure-driven flow without considering the effect of the surface charge on the slip length.

Using Equation 13, Equation 15, Equation 28 and the non-dimensional definitions in Equation 16, we can obtain the following expression for η from Equation 27:

is the principal argument of

The study of surface wetting, nanobubbles and boundary slip with an applied voltage: A review

© 2019 Buren et al.; licensee Beilstein-Institut.
This is an Open Access article under the terms of the Creative Commons Attribution License (http://creativecommons.org/licenses/by/4.0). Please note that the reuse, redistribution and reproduction in particular requires that the authors and source are credited.
The license is subject to the Beilstein Journal of Nanotechnology terms and conditions: (https://www.beilstein-journals.org/bjnano) 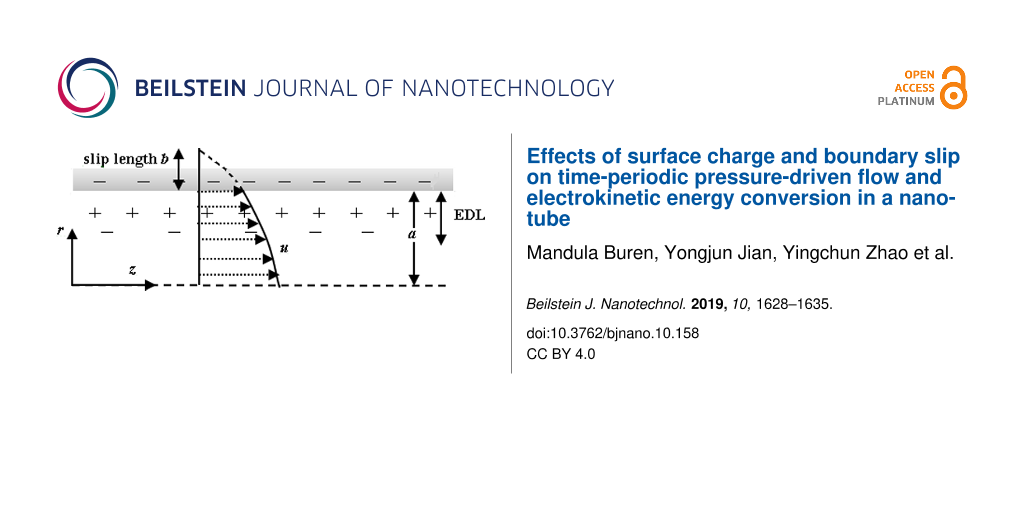