All articles from this author
Wei Cao


All articles from this author
Ziyu Wang


All articles from this author
Jing Shi


All articles from this author
Rui Xiong

We have investigated the thermoelectric properties of a pristine MoO3 monolayer and its defective structures with different oxygen vacancies using first-principles methods combined with Boltzmann transport theory. Our results show that the thermoelectric properties of the MoO3 monolayer exhibit an evident anisotropic behavior which is caused by the similar anisotropy of the electrical and thermal conductivity. The thermoelectric materials figure of merit (ZT) value along the x- and the y-axis is 0.72 and 0.08 at 300 K, respectively. Moreover, the creation of oxygen vacancies leads to a sharp peak near the Fermi level in the density of states. This proves to be an effective way to enhance the ZT values of the MoO3 monolayer. The increased ZT values can reach 0.84 (x-axis) and 0.12 (y-axis) at 300 K.

As promising candidates to address these severe challenges, transition metal oxides (TMOs) provide a vast variety of low-cost and environmentally friendly materials. From insulating to semiconducting and conducting, TMOs exhibit wide-ranging electrical and magnetic characteristics that depend on their geometric structure, doping concentration and stoichiometry ratio [4]. TMOs have been used in many fields such as Li-ion batteries, electrochemical capacitors and fuel cells [5]. Meanwhile, the thermoelectric application of TMO-based materials has been explored and their poor efficiency is still the major difficulty [6].

Among the TMOs, layered molybdenum trioxide (MoO3) has attracted attention as a potential electrode material in electrochemical products [7] and Li-ion batteries [8-11]. Like most TMOs, bulk MoO3 has a wide band gap (about 3.0 eV) and low electrical conductivity, which seems inappropriate for thermoelectric devices. However, the electrical properties (including band gap and conductivity) of MoO3 are strongly dependent on the concentration of O vacancy concentrations. Hydrogen-ion intercalation [12] and solar-light irradiation [13] can turn MoO3 into MoO3−x and hence increase the electrical conductivity. Understanding the effect of O vacancies in MoO3 is very beneficial for its thermoelectric applications. Moreover, low-dimensional materials show a better thermoelectric performance than bulk materials [14]. Few-layer MoO3 nanosheets have already been experimentally synthesized by exfoliation similar to graphene [12,13,15,16]. Theoretical research has proved that few-layer MoO3 possesses a markedly high carrier mobility above 3000 cm2·V−1·s−1 [17]. Therefore, it is of profound significance to explore the thermoelectric properties of MoO3 monolayers and discuss the effect of O vacancies on it.

In this work, we evaluate the thermoelectric properties of a MoO3 monolayer by Boltzmann transport theory and first-principles calculations. The calculations of the electrical properties of the MoO3 monolayer are performed using density functional theory (DFT) as implemented in the Vienna ab initio simulation package (VASP) code [18,19]. We utilize the generalized gradient approximation (GGA) of the Perdew–Burke–Ernzerhof (PBE) [20] pseudopotentials without spin–orbit interaction. Since the PBE functional fails to capture the electrical and optical properties of bulk MoO3 by a large margin (band gap of less than half of the experimental value), we also employ the Heyd–Scuseria–Ernzerhof (HSE06) hybrid functional [21,22] to obtain a more accurate band structure. The vacuum distance is set to 15 Å to avoid interactions between the MoO3 monolayer and its periodic images. A plane-wave basis set with a cutoff of 520 eV is chosen, and the k-mesh is tested to be 10 × 10 × 1 for the purpose of convergence.

where the u is the chemical potential (corresponding to the carrier concentration), kB is the Boltzmann constant, e is the electron charge and T is the absolute temperature. Σ(ε) is the so-called transport distribution function [24]:

is the group velocity of the carriers and

is the relaxation time. The thermal conductivity κe is obtained by the Wiedemann–Franz law: κe = LσT, where L is the Lorenz number. For the calculation of the relaxation time τ, we apply the deformation potential (DP) theory [25] where τ is estimated by τ = μm*/e. The carrier mobility μ2D in 2D materials is given by

E1 is the DP constant and C2D is the elastic modulus. All parameters corresponding to the carrier mobility and the effective mass are taken from [17] and summarized in Table 1.

As for phononic transport properties, we calculate the thermal conductivity of the lattice using the Boltzmann transport theory as implemented in the Quantum ESPRESSO (QE) package [26,27] and the ShengBTE code [28]. The pseudopotential files are obtained from the standard solid-state pseudopotentials library [29] and the kinetic energy cutoff is set to 80 Ry. Density functional perturbation theory (DFPT) is adopted from the QE package for the calculation of second-order (harmonic) interatomic force constants (IFCs), and third-order (anharmonic) IFCs are obtained from the ShengBTE code [28] with the maximum atomic interaction distance of the sixth neighbor in the 4 × 4 × 1 supercell. Here, a dense phonon q-grid of 52 × 52 × 1 is used to compute the thermal conductivity of the lattice of MoO3, and the scale parameter for smearing is set to 0.1.

As shown in Figure 1a, the MoO3 monolayer is cut from an orthorhombic α-MoO3 bulk structure (space group Pbnm), and the primitive cell contains eight atoms. Apparently, there are three distinguishable O atoms, that are connected to different molybdenum atoms, as indicated by different colors in Figure 1a. The relaxed lattice constants of the MoO3 monolayer are a = 3.68 Å and b = 3.93 Å, which are similar to the bulk experimental data of 3.70 and 3.96 Å [30]. In Figure 1b, we give the electronic band structure of the MoO3 monolayer as calculated using the PBE potential and the HSE06 hybrid functional potential. One can see clearly that both of the two different potentials yield similar electronic band structures for the larger energy gaps. The minimum point of the first conduction band (CBM) appears at the Γ point, while the maximum of the first valence band (VBM) appears at the S point. The indirect bandgap of the MoO3 monolayer is computed as 1.79 eV for PBE and 2.85 eV for HSE06, which is consistent with previous studies [17,31]. Since the MoO3 monolayer is a wide-gap semiconductor, it is likely to exhibit a giant Seebeck coefficient and low electrical conductivity. The discrepancies between the results obtained using the PBE potential and the HSE06 hybrid functional are inconspicuous concerning the Seebeck coefficient and the electrical conductivity. Considering the extremely slow speed of the HSE06 hybrid functional potential, we use the PBE potential to get the electrical transport properties of the MoO3 monolayer in the following work.

In order to improve the thermoelectric performance of the MoO3 monolayer, we decided to introduce an O vacancy. Therefore, we remove one O atom from the 3 × 3 × 1 supercell (72 atoms) to construct a neutral defect, such that the stoichiometric proportion is MoO2.94. Since there are three types of O atoms in the primitive cell, we named the three defective structures VO1, VO2 and VO3. Further details of the defect structures are presented in Supporting Information File 1. The formation energy, Ef, of a neutral defect is defined as: Ef = Etot(defect) − Etot(supercell) + ½ Etot(O2), where Etot(defect) is the total energy of the supercell containing the defect, Etot(supercell) is the total energy of the perfect supercell and Etot(O2) is the total energy of the oxygen molecules. Then we calculate the formation energies and band gaps of these defect structures. The absolute Ef values are 2.074 eV (VO1), 2.076 eV (VO2) and 4.108 eV (VO3) while the band gaps are 0.837 eV (VO1), 0.797 eV (VO2) and 0.831 eV (VO3). In contrast to the bulk MoO3, the three defective structures finally lead to only two stable structures after relaxation which is attributed to the absence of interlayer van der Waals forces.

To give a clear reason for the strengthening of the thermoelectric properties, we show the electronic DOS of these structures in Figure 4. Upon the introduction of the O vacancy, the Fermi level moves closer to the conduction band and an asymmetric sharp peak occurs around the bottom of the conduction band, as highlighted in Figure 4a. The sharp peak in the DOS mainly comes from the Mo atom indicated by the projected DOS of Mo and O atoms presented in Figure 4b and Figure 4c. Additionally, the values for VO1 and VO2 are almost the same, which means that they lead to the same structure. The structural dependency of the defective MoO3 monolayer is reflected in the insets of Figure 4b and Figure 4c. Previous theoretical studies show that a narrow and sharp peak in the electronic DOS around the Fermi level will generate a large transport distribution function and maximize the power by a factor of S2σ [24,35]. Especially for VO3, the sharp peak is more clear than for the other structures, yielding the best thermoelectric performance. Finally, O vacancies can act as shallow donors and destroy the crystal symmetry, thereby enlarging the carrier concentration.

In summary, we have presented a comprehensive study of the thermoelectric properties of the MoO3 monolayer by first-principles calculations and Boltzmann transport theory. Our results indicate that the MoO3 monolayer exhibits better thermoelectric performance along the x-axis than along the y-axis because of the strong anisotropic behavior of both the electrical and thermal conductivity. The ZT value along the x-axis reaches 0.72 at 300 K, which is much higher than the values obtained for other oxides. On the other hand, we find that the introduction of O vacancies is an efficient way to improve the thermoelectric performance of the MoO3 monolayer. Such an improvement can be attributed to a sharp peak in the electronic DOS, which leads to a large transport distribution function. The monolayer structure with the O vacancy at the O3 position possesses a maximum room temperature ZT value of 0.84 (x-axis) and 0.12 (y-axis). This work should provide helpful theoretical guidance that is relevant for possible thermoelectric applications of two-dimensional TMOs.

First-principles study of the structural, optoelectronic and thermophysical properties of the π-SnSe for thermoelectric applications

© 2019 Zheng et al.; licensee Beilstein-Institut.
This is an Open Access article under the terms of the Creative Commons Attribution License (http://creativecommons.org/licenses/by/4.0). Please note that the reuse, redistribution and reproduction in particular requires that the authors and source are credited.
The license is subject to the Beilstein Journal of Nanotechnology terms and conditions: (https://www.beilstein-journals.org/bjnano) 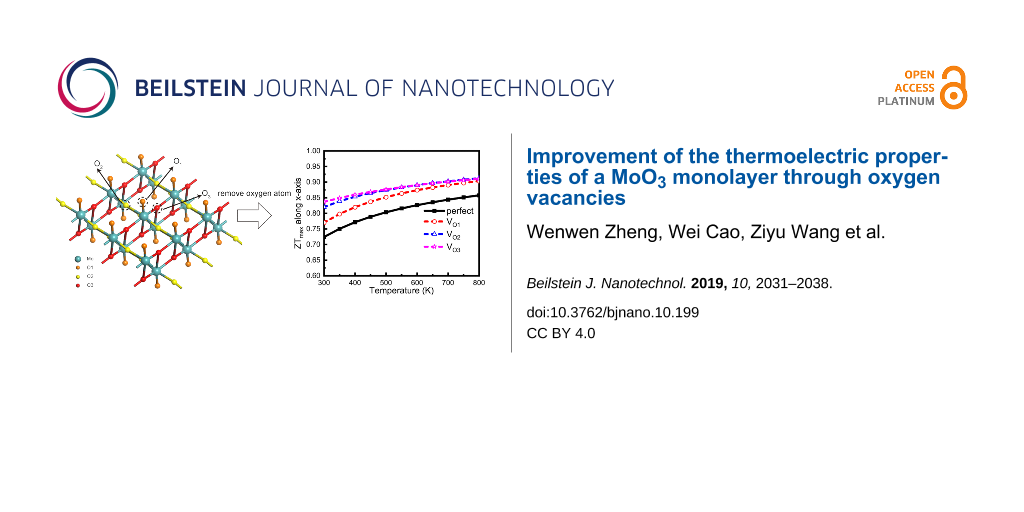