All articles from this author
Xiaoli Sun


All articles from this author
Zhiguo Wang

To satisfy the increasing demand for high-capacity energy storage systems, rechargeable lithium–sulfur (Li–S) batteries have attracted much attention in recent years due to a high theoretical specific energy density of 2567 Wh/kg, a high theoretical capacity of 1672 mAh/g, low cost, non-toxicity, and the abundance of sulfur [1]. The energy density of a Li–S battery is six times higher than that of current commercially used lithium-ion batteries (387 Wh/kg) [2-5]. Typically, a rechargeable Li–S battery is composed of a sulfur cathode and a metallic Li anode, with an organic liquid electrolyte as the ionic conductor, and a porous separator. The Li–S batteries undergo the reaction of 16Li + S8 → 8Li2S, with a simplified reaction sequence of S8 → Li2S8 → Li2S6/Li2S4 → Li2S2/Li2S. Low coulombic efficiency, active material loss, and rapid capacity fading hinder the practical application of Li–S batteries [6]. The insulating nature of sulfur and its lithiation products, Li2S2 and Li2S, leads to low electrical conductivity of the cathode and low rate capability. Dissolved higher-order lithium polysulfides (LPSs) (Li2Sx, x = 4–8) in the organic electrolyte solvent will migrate and react with the lithium anode, which results in capacity fading and low coulombic efficiency [7,8]. The major issue is the complex diffusion of LPSs, which in combination with the subsequent redox reactions is known as the shuttle effect. The shuttle effect aggravates the cyclic performance of the Li–S battery.

During recent years, many approaches have been devoted to suppressing the shuttle effect and improving the conductivity. Physical confinement of LPSs within host materials with large surface area, such as carbon nanotubes and porous materials, has been a common strategy to minimize the leakage of LPSs. However, the function of physical confinement is limited, and it slows down diffusion for ionic transport [9]. The addition of anchoring materials into the cathodes with a strong binding affinity to LPSs was thought as an efficient approach to improve the electrochemical performance. Due to the polarity of LPSs species, the interaction between LPSs and anchoring materials can be enhanced through polar–polar interactions. Graphene-based materials have been considered as anchoring materials due to their high electrical conductivity [10]. However, the adsorption of polarized LPSs on non-polarized graphene is weak; heteroatom doping is necessary for improving the anchoring effect. Nitrogen doping has been used to modify the anchoring behavior of graphene, and the N-doped graphene showed improved anchoring of Li2Sx [11]. Polar materials were explored to trap LPSs, such as metal oxide [12,13] and metal-carbide nanoparticles [14]. Many two-dimensional (2D) materials, such as borophene [15], silicene [16], phosphorene [17], Mxene [18] and MoS2 [8], have been investigated as anchoring materials due to their large surface-to-volume ratio. An ideal anchoring material should display a binding energy with LPSs in the range from 0.8 to 2.0 eV in order to effectively trap Li2Sx [8], and good electrical and ionic conductivity.

Nanostructured MoS2 used as an electrode material for lithium-ion batteries shows a higher specific capacity. Nanoflower MoS2/reduced graphene oxides composites exhibited a high specific capacity (1225 mAh/g) and an excellent cycling performance (680 mAh/g) after 250 cycles [19]. MoS2 nanoparticles have been used as a starting material for the synthesis of Li–S battery cathodes, since Li2S and metallic Mo are formed when MoS2 is fully lithiated [20,21]. 2D MoS2 (ca. 10 nm thick) can also be used as a protective layer for Li metal anodes to suppress the dendrite formation in Li–S batteries. A threefold improvement in cycle life was shown for protected Li metal compared to bare Li metal, which greatly improved the performance of Li–S batteries [22]. MoS2 has been used as anchoring material for LPSs to enhance the performance of Li–S batteries, when it is embedded into a sulfur-rich matrix cathode [23]. However, density functional theory (DFT) calculations showed that the LPSs are weakly bound to 2H-MoS2 [8]. The enhanced performance of Li–S batteries using MoS2 as anchoring material [23] may be attributed to the strong binding at the edge and terrace sites [24].

2D MoS2 shows different polymorphs [25], differing in the position of the S atoms on each side of the Mo atomic layer. 2H-MoS2 is the energetically stable phase with semiconductor characteristics, in which the S atoms are located in the lattice positions of a hexagonal close-packed structure. 1T'-MoS2 is a meta-stable phase with narrow bandgap, in which each Mo atom is octahedrally coordinated with six S atoms. The phase transformation of 2H→1T' has been widely studied [26-28]. The fundamental mechanisms of this structural transformation are governed by electron transfer [26], so the phase transition can be initiated by treatment with n-butyllithium (n-BuLi) [27], intercalation of alkali-metal ions [29,30], substitution of Mo by Re atoms [28], electron-beam irradiation [31] and hot-electron injection [32]. Recently, it was reported that MoS2/reduced graphene oxide (rGO)/S cathodes for Li–S batteries exhibit outstanding performance. X-ray photoelectron spectroscopy and Raman spectroscopy showed that few-layered MoS2 is composed of 1T'-phases and 2H-phases [33]. The composites of 1T'-MoS2 with other active materials, such as graphene [34], carbon nanotubes [35], Mxene [36], and SnO2 [37], have received much attention regarding the use as cathodes for Li–S batteries. The electrochemical performance including the capacity, rate capability and stability can be greatly improved by using these cathodes.

The phase structure has a profound influence on physical and chemical properties such as electron conductivity and catalytic behavior [38]. The mechanism of 1T MoS2 enhancing the electrochemical behavior is not well understood. In this study, we systematically investigated the adsorption of LPSs on 2H-MoS2 and 1T'-MoS2 monolayers with DFT calculation. Our results show that the 1T'-MoS2 monolayer interacts strongly with Li2Sx, which will hinder the shuttle effect. Taking into account the better conductivity, 1T'-MoS2 monolayers can be used as a conductive anchoring material to design advanced Li–S batteries.

Both 2H-MoS2 and 1T'-MoS2 monolayers exhibit a structure with three atomic layers, in which the Mo atomic layer is sandwiched by two S atomic layers. The 6 × 6 supercells for 2H-MoS2 and 1T'-MoS2 monolayers used in the work are shown in Figure 1a and Figure 1b, respectively. The electronic band structures along high-symmetry points are shown in Figure 1c and Figure 1d, respectively. The 2H-MoS2 monolayer is a semiconductor with a direct bandgap of 1.67 eV, both the conduction band minimum (CBM) and valence band maximum (VBM) are located at the K point, which is consistent with previous DFT calculations [39]. 1T'-MoS2 is a narrow-bandgap semiconductor with a bandgap of 0.15 eV.

are the total energy of the MoS2 monolayer with and without Li2Sx adsorption.

orbital, whereas that of 1T'-MoS2 monolayer is dominated by the dxy and

orbitals. As the Li2Sx absorbed on the monolayer, electron transfers from Li2Sx to the unoccupied lowest states of the monolayer. The dxy and

To understand the binding between LPSs and the 2HMoS2- and 1T'-MoS2 monolayers, the charge-density difference was calculated using Equation 2:

The working mechanism of Li–S batteries includes the following steps, octasulfur is reduced to long chains of LPSs, Li2Sx (6 < x ≤ 8), and further to lower-order LPSs, Li2Sx (2 < x ≤ 6), the final product of Li2S is formed upon discharging; and the charging process occurs through the reverse reactions [40]. The insulating nature of sulfur and the lithiation products (Li2S2 and Li2S), and the dissolution of higher-order Li2Sx (x = 4–8) are the main challenges in the application of Li–S batteries [7,8]. An ideal anchoring material with binding energies with LPSs in the range from 0.8 to 2.0 eV [15], and with good electrical and ionic conductivity is desirable for improving the electrochemical performance of Li–S batteries. Although the 2H-MoS2 monolayer shows good Li conductivity, it is a semiconductor with weak binding energies for LiPSs. Through phase engineering of the 2H-MoS2 to the 1T'-MoS2 monolayer, the anchoring behavior can be greatly improved. 1T'-MoS2 also exhibits good electrical and ionic conductivity. Hence, the electrochemical performance of Li–S batteries is improved by using 1T'-MoS2 as additive in the cathodes [33-37].

The same simulation method and models of [26] were used in the present work. All spin-polarized DFT calculations were performed with the Vienna ab initio simulation package (VASP) [42] plane-wave simulations. Electron–ion interaction and electron exchange–correlation were described using the projector augmented wave (PAW) method [43] and the generalized gradient approximation (GGA) was described using the Perdew–Burke–Ernzerhof (PBE) function, respectively. The energy cutoff for the plane-wave basis expansion was chosen to be 520 eV. To avoid the interaction between the periodic images, a 6 × 6 supercell of a MoS2 monolayer, which contains 36 Mo and 72 S atoms, was used to investigate the adsorption of Li2Sx. A 25 Å vacuum space was constructed perpendicular to the monolayers. The Brillouin zone was integrated using the Monkhorst–Pack scheme [44] with a 3 × 3 × 1 k-grid for the geometry optimization. All atomic positions and cell parameters were relaxed until the force on each atom is less than 0.02 eV/Å.

This work was financially supported by the National Natural Science Foundation of China (11474047) and the Fundamental Research Funds for the Central Universities (ZYGX2016J202). This work was conducted at the National Supercomputer Center in Tianjin, and the calculations were performed on TianHe-1(A).

© 2019 Dong et al.; licensee Beilstein-Institut.
This is an Open Access article under the terms of the Creative Commons Attribution License (http://creativecommons.org/licenses/by/4.0). Please note that the reuse, redistribution and reproduction in particular requires that the authors and source are credited.
The license is subject to the Beilstein Journal of Nanotechnology terms and conditions: (https://www.beilstein-journals.org/bjnano) 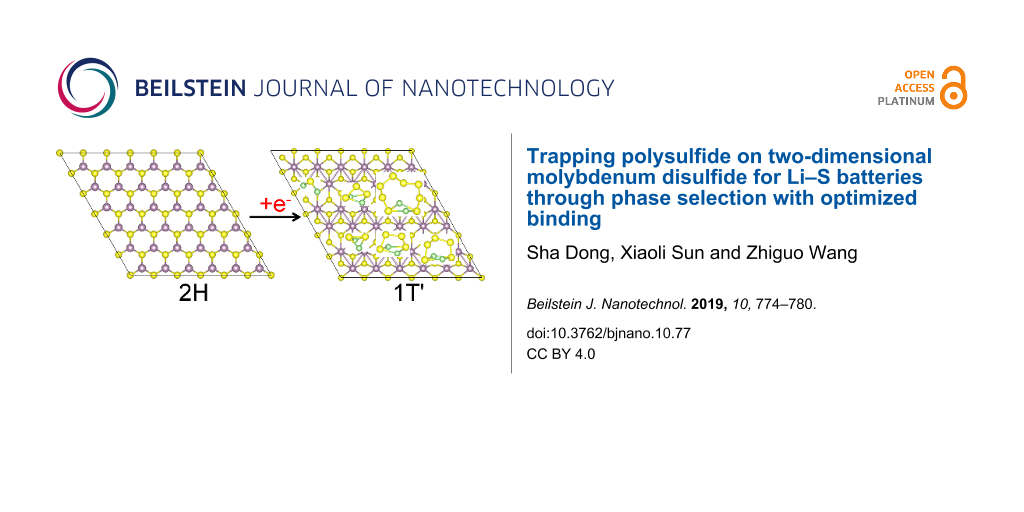