The dielectric properties of BTO–polymer composites are known to improve considerably with the inclusion of BTO nanoparticles. For instance, Dang et al. [9] achieved a permittivity value of ca. 40 at 10 kHz with 50 vol % loading of BTO in polyvinylidene fluoride (PVDF). However, such a high content of BTO nanoparticles has severe effects on the overall performance of the composite dielectric materials [9,10], which are largely attributed to the interphase inhomogeneity, poor distribution, and agglomeration of BTO nanoparticles in the polymer matrix. You et al. [10] observed an increase in the permittivity (from 4 to 14) of poly(arylene ether nitrile) filled with 40 wt % polyaniline-functional-BTO nanoparticles, but they noticed that breakdown strength of the composite was critically affected at a high concentration of filler due to free charge accumulation at the interface.

Therefore, to improve breakdown strength and energy storage density of BTO, we propose the design of polythiophene (PTh)-encapsulated BaTiO3 nanoparticles with a 9:1 mass ratio of BTO/PTh, and a facile method for the synthesis of inverted [11] core–shell-type BTO-PTh nanostructures, which yields a uniform PTh coating on the BTO surface. BTO-PTh nanoparticles are prepared by Cu(II)-catalyzed oxidative polymerization of PTh on the BTO surface. This procedure yields a high BTO content in the PTh shell, which not only results in superior dielectric properties such as high permittivity and low loss, but also significantly increases breakdown strength. Consequently, core–shell BTO-PTh nanoparticles exhibit greatly improved energy storage density. We believe BTO-PTh nanoparticles are a promising material and this design is a noteworthy strategy for future research and advanced microelectronic and energy storage applications.

Barium hydroxide octahydrate (Ba(OH)2·8H2O, ≥98%, Sigma-Aldrich) and fine-grained titanium dioxide (TiO2 Tronox, 99.5%, Tronox Pigments GmbH) are used as Ba and Ti precursors for the hydrothermal synthesis of BTO nanoparticles. Ba(OH)2·8H2O also acts as the mineralizer and prevents the use of NaOH or KOH for controlling the pH value of the reaction mixture [12]. Equimolar amounts of Ba and Ti precursors are added to the double-distilled water in a PTFE-lined pressure vessel. The hydrothermal reaction is carried out in an autoclave (Berghof Instruments GmbH) at 120 °C and autogenous pressure for 24 h under stirring. The product is washed with dilute formic acid solution and double-distilled water to dissolve and remove impurities and is dried in an oven at 120 °C. The obtained dried product is pulverized to get BTO nanoparticles.

In the next step, core–shell BTO-PTh nanoparticles are synthesized via in situ chemical oxidative polymerization of thiophene on hydrothermally produced BTO nanoparticles. BTO nanoparticles are first dispersed in double-distilled water containing sodium dodecyl sulfate (SDS, ACS reagent, ≥99.0%, Sigma Aldrich) and thiophene (Th, synthesis grade 99%, Scharlab, S.L.) monomer through ultrasonication for 1 h. The mass ratio of BTO/Th is adjusted to 9:1. Subsequently, hydrogen peroxide (H2O2, solution 30% w/w, Scharlab, S.L.) and copper(II) sulfate pentahydrate (CuSO4·5H2O, reagent grade, ≥98.0%, Honeywell) solution are added to the BTO-Th mixture. The reaction is performed by stirring the mixture for 7 h at 50 °C. The product is washed with double-distilled water and ethanol and is dried in a vacuum oven at 50 °C for 24 h. Figure 1 shows a schematic of the synthesis of core–shell BTO-PTh nanoparticles.

Chemical structure and surface morphology of the as-prepared BTO nanoparticles, core–shell-type BTO-PTh nanoparticles, and pristine PTh are characterized and reported herein. Figure 2 shows the FTIR spectra of PTh, BTO, and BTO-PTh nanoparticles. A distinct peak at 560 cm−1 is the characteristic stretching vibration (νTi–O) of BTO structure [13,14]. PTh is characterized by the symmetric and asymmetric stretching vibrations (νC=C) of the aromatic ring at 1628 and 1385 cm−1, a sharp aromatic ring deformation (δC–S–C) at 610 cm−1, and a typical stretching vibration of the aromatic β-hydrogens (νCβ–H) at 3060 cm−1 [15,16]. The broad transmittance peak at 3418 cm−1 and weak bands in the range of 2845–2935 cm−1 are attributed to the adsorbed water molecules (νO–H) and the carbonaceous impurities (νCH3, νCH2) in PTh, respectively. A peak at 1123 cm−1 that is also characteristic of PTh corresponds to the Cα–Cα resonance absorption between two thiophene rings [17]. It demonstrates that PTh is predominantly formed by Cα–Cα conjunction during the low-temperature oxidative polymerization. The transmittance peaks at 1035 cm−1 and 788 cm−1 further prove this point as they indicate the out-of-plane bending (τCβ–H) and in-plane bending vibrations (ρCβ–H) of PTh, respectively [17,18]. According to Wu et al. [17], the intensity of Cβ–H transmissions would considerably decrease if PTh had Cβ–Cβ conjunction. In BTO-PTh spectrum, the out-of-plane and in-plane bending of Cβ–H shift to 1077 cm−1 and 983 cm−1, respectively, which is attributed to the interactions between β-hydrogens of PTh and oxygen atoms on the BTO surface.

X-ray diffraction patterns of BTO, PTh, and core–shell BTO-PTh nanoparticles are presented in Figure 3. Pristine PTh is amorphous in nature and shows a low-intensity broad peak at around 23°, which corresponds to the intermolecular π–π stacking structure and amorphous packing of the polymer [19]. The XRD pattern of hydrothermally prepared BTO nanoparticles shows good agreement with the tetragonal perovskite structure (JCPDS No. 05-0626) with the P4mm space group [20,21]. The major diffraction peaks at around 22.1°, 31.6°, 38.5°, 44.8°, 45.2°, 55.7°, and 56.0° are indexed as (100), (110), (111), (002), (200), (112), and (211), respectively. These diffractions are used to identify the tetragonal BTO lattice. A distinct peak splitting around 45° corresponding to the Miller indexes (002) and (200) differentiates tetragonal BTO from cubic BTO [20]. Thus, as-prepared BTO nanoparticles are monocrystalline and exhibit a tetragonal lattice structure. Also, there is no sign of any impurity due to the repeated washing of BTO nanoparticles with dilute formic acid solution, which removes common impurities such as BaCO3 [22].

XRD pattern of core–shell BTO-PTh nanoparticles shows the characteristic diffractions of tetragonal BTO along with the additional peaks corresponding to certain impurities or by-products formed during the oxidative polymerization of Th. Albeit the crystallinity of core–shell BTO-PTh nanoparticles is slightly affected by the amorphousness of the PTh coating, the tetragonal perovskite structure (indicated by #) is still dominant. The additional diffraction peaks (indicated by *) are attributed to orthorhombic BaSO4 [23]. It is a consequence of the leaching of Ba2+ ions from BTO nanoparticles during the polymerization reaction [24], which can react with SO42− ions in the solution to form insoluble BaSO4. Nevertheless, XRD patterns of BTO and BTO-PTh nanoparticles confirm the dominant tetragonal perovskite structure of the BTO lattice.

Figure 7 shows the breakdown strength (Eb) measured at the room temperature and the calculated energy storage density (J) of all samples. The energy density is calculated using Equation 1 [30,31]:

Furthermore, in situ oxidative polymerization of PTh on BTO surfaces allows for the inclusion of 90 wt % BTO, which results in a high dielectric constant. This means that the tremendous increase in the energy storage density of core–shell BTO-PTh nanoparticles is due to the combined effect of high dielectric constant (ε′) and improved breakdown strength (Eb). These results are noteworthy considering the previous examples of BTO-polymer composite dielectric materials. Table 1 offers a comparison of dielectric properties, breakdown strength, and energy storage density between other BTO-polymer composite-based dielectric materials and those described in this work. It shows that core–shell BTO-PTh nanoparticles can be used alone or as reinforcement in various polymer matrices for prospective microelectronic and energy storage applications.

© 2020 Khan et al.; licensee Beilstein-Institut.
This is an Open Access article under the terms of the Creative Commons Attribution License (http://creativecommons.org/licenses/by/4.0). Please note that the reuse, redistribution and reproduction in particular requires that the authors and source are credited.
The license is subject to the Beilstein Journal of Nanotechnology terms and conditions: (https://www.beilstein-journals.org/bjnano) 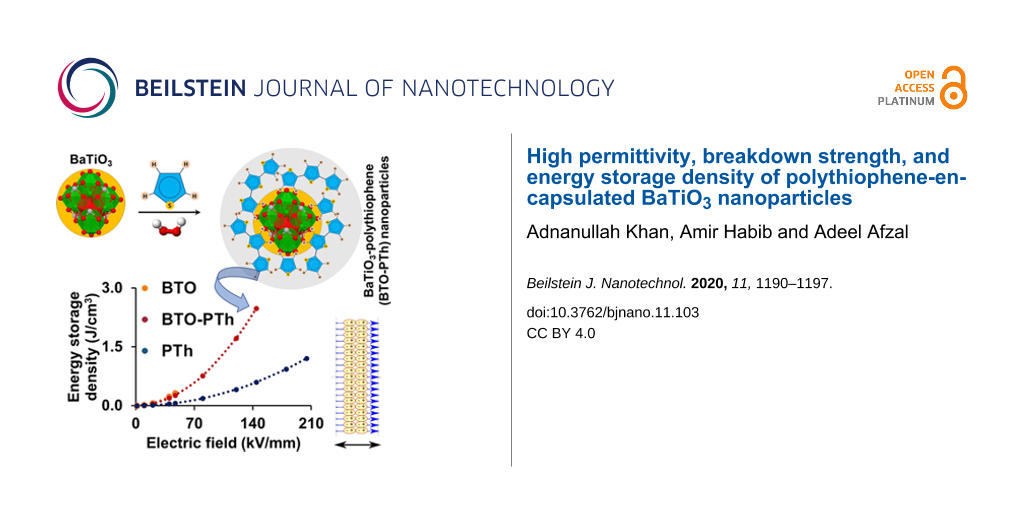