All articles from this author
Min Wen


All articles from this author
Zhen Tong


All articles from this author
Shuhua Li


All articles from this author
Yanhong Yin


All articles from this author
Yesheng Li


All articles from this author
Tongxiang Liang


All articles from this author
Ziping Wu


All articles from this author
Dionysios D. Dionysiou

Photocatalysis is considered to be a green and promising technology for transforming organic contaminants into nontoxic products. In this work, a CuO/tourmaline composite with zero-dimensional/two-dimensional (0D/2D) CuO architecture was successfully obtained via a facile hydrothermal process, and its photocatalytic activity was evaluated by the degradation of methylene blue (MB). Surface element valence state and molecular vibration characterization revealed that CuO chemically interacted with tourmaline via Si–O–Cu bonds. The specific surface area of the CuO/tourmaline composite (23.60 m2 g−1) was larger than that of the pristine CuO sample (3.41 m2 g−1). The CuO/tourmaline composite exhibited excellent photocatalytic activity for the degradation of MB, which was ascribed to the increase in the quantity of the adsorption-photoreactive sites and the efficient utilization of the photoinduced charge carriers. This study provides a facile strategy for the construction of 0D/2D CuO structures and the design of tourmaline-based functional composite photocatalysts for the treatment of organic contaminants in water.

Developing a novel semiconductor with excellent photoreactive activity toward the treatment of organic contaminants in wastewater is in urgent need owing to the deterioration of the ecological environment [1]. Metal oxides, such as ZnO [2], TiO2 [3], Fe2O3 [4], and CuO [5], have been demonstrated to be promising photocatalysts. In particular, the band gap energy (Eg) of the p-type CuO semiconductor is ≈1.2 eV [6]. The application of CuO covers the fields of photocatalytic degradation of organic contaminants [7], photocatalytic reduction of CO2 [8,9], photocatalytic splitting of water [10], etc. Nanoscale CuO has been widely studied owing to its increased surface defects and higher specific surface area compared with its bulk counterpart [11,12]. However, the agglomeration of nanoscale CuO results from the high surface energy and the quick recombination of the photoinduced charge carriers and restricts the photocatalytic activity [13,14]. At present, the construction of CuO-based heterostructures (e.g., 0D/2D CuO/TiO2, 0D/3D CuO/ZnO, 2D/2D CuO/Fe2O3, 0D/2D CuO/C3N4, 2D/0D CuO/Ag3PO4) [6,12,15-17] and the dispersion of CuO on supporting materials (e.g., graphene, carbon nanotube) [7,18] are considered to be the most effective ways to address these problems. However, it is difficult to obtain uniform heterostructures, and the preparation process is either complex or of high cost. Therefore, exploring low-cost and easily synthesized CuO-based materials with good photoreactive properties is still an urgent task. Especially the 0D/2D structure has been proven to be effective for enhancing the photocatalytic activity due to the decrease in the distance for the separation and migration of charge carriers [19] and the introduction of nanoparticles [20].

Herein, we report the successful synthesis of the CuO/tourmaline composite photocatalyst with 0D/2D CuO geometric structure by a facile precipitation–hydrothermal process. This work firstly highlights a simple way to promote the photocatalytic activity of CuO by coupling with the polar mineral tourmaline, and provides an ideal example for the development of easily synthesized and low-cost tourmaline-based photocatalysts. The morphology, microstructure, pore structure, optical properties, and durability of the samples were characterized and discussed. The photocatalytic degradation performance of the CuO/tourmaline composite was investigated, and a plausible mechanism was proposed.

A hydrothermal process was employed to synthesize the CuO/tourmaline composite. In detail, 0.50 g of the tourmaline powder and 40 mL of distilled water were added into a beaker followed by 20 min of magnetic stirring, and the obtained suspension was sonicated for 20 min to ensure the formation of a homogeneous suspension A. Then, 1.25 g of Cu(CH3COO)2·H2O was dissolved into suspension A to form suspension B. A homogeneous solution C was obtained by dissolving 0.50 g of NaOH into 20 mL of distilled water, and it was mixed dropwise with suspension B with vigorous stirring for 30 min. Finally, the as-formed suspension was transferred into a polytetrafluoroethylene reactor with a total volume of 100 mL and kept at 180 °C for 6 h. After naturally cooling down, deionized water was used to wash the resultant products and the obtained samples were dried under 70 °C, and the product was named CuO/tourmaline-1:1 (1:1 in mass ratio of the CuO/tourmaline). By controlling the dosage of Cu(CH3COO)2·H2O and NaOH in proportion the CuO/tourmaline composites in different mass ratios of the CuO/tourmaline were acquired.

The photocatalytic performance was examined by the degradation of MB with light irradiation simulated by a 300 W Xe lamp with a 420 nm cut-off filter. In detail, 0.05 g of the as-synthesized photocatalyst was added into 100 mL of 0.01 g L−1 MB aqueous solution, followed by 1 h of magnetic stirring in the dark to make sure the adsorption saturation of MB onto the photocatalysts was achieved. Then, the photocatalyst–dye aqueous suspension system was exposed to light. 4 mL of the aqueous suspension was extracted every 20 min and clarified by centrifugation for the measurement of absorbance, which can be used to monitor the progress of the photocatalytic degradation reactions. For the durability test, the used photocatalyst was firstly rinsed with ethanol and deionized water by centrifugation, then it was collected by using aqueous MB for the subsequent experiments.

The surface element component and valence state of the as-synthesized photocatalysts were investigated with XPS (Figure 1b). Two XPS peaks with binding energy of 932.93 eV and 952.79 eV correspond to Cu 2p3/2 and Cu 2p1/2, respectively. The satellite peaks with higher binding energy of 941.78 eV and 961.45 eV were observed [26]. In comparison to pure CuO, the binding energy of Cu 2p3/2 and Cu 2p1/2 for the CuO/tourmaline composite was shifted to 933.49 eV and 953.37 eV, respectively, providing evidence of the chemical interaction between CuO and tourmaline.

SEM and TEM were carried out to characterize the morphology and microstructure of the samples. Tourmaline displayed a granular morphology with diameter of 0.1–1.0 μm (Figure 3a and 3d). The pure CuO was composed of highly stacked smooth 2D nanoflakes with a thickness of ≈50 nm (Figure 3b and 3e). With the addition of tourmaline, plenty of 0D CuO nanoparticles (≈20 nm) were generated on the surface of 2D CuO nanoflakes (Figure 3c and 3f). The 0D CuO nanoparticles roughened the surface of the 2D CuO nanoflakes and significantly alleviated their agglomeration. The lattice fringes with a d spacing of 0.34 nm and 0.25 nm matched well with the (012) plane of tourmaline and the (002) plane of CuO, respectively (Figure 3d,e, inset). There was intimate interfacial contact between CuO and tourmaline (Figure 3f, inset), which provided channels for the fast transfer of photoinduced e− from the conduction band (CB) of CuO to tourmaline. The energy dispersive X-ray (EDX) elemental mapping verified the uniform dispersion of CuO throughout the CuO/tourmaline composite (Figure 3g).

Various measurements were employed to investigate the effect of tourmaline on the separation of photoinduced charge carriers. The transient photocurrent density of the CuO/tourmaline composite was higher than that of pristine CuO during the repeated switching on and off of light irradiation (Figure 5c), implying that tourmaline could facilitate the transfer of photoinduced e−, which was also confirmed by the PL spectra (Supporting Information File 1, Figure S1). Generally speaking, the higher the transient photocurrent density, the smaller the electrochemical impedance spectra (EIS) [33,34]. According to the time-resolved PL spectra in Figure 5d, the average fluorescence lifetime of the CuO/tourmaline composite (2.94 ns) was shortened with reference to pristine CuO (3.24 ns) (Table 1). This result indicated that an additional nonradiative decay pathway may be opened through the electron transfer from CuO to tourmaline [35]. The above analyses confirmed the role of tourmaline in suppressing the recombination of photoinduced charge carriers.

Trapping experiments were carried out to verify the predominant reactive species that participated in the photocatalytic organic oxidation reactions. •OH, O2•−, and h+ were trapped by TBA, BQ, and EDTA, respectively [40,41]. Judging from Figure 6d, the addition of TBA, BQ, and EDTA resulted in a decrease in MB degradation from 99.6% to 60.8%, 83.5%, and 27.4%, respectively. The results revealed that h+, •OH, and O2•− were involved in the photocatalytic reactions, and h+ contributed to the higher organic oxidation than •OH and O2•−. An EPR measurement was used to directly probe the generation of reactive species in the CuO/tourmaline composite aqueous suspensions by using DMPO as a trapping agent. As shown in Figure 6e and 6f, no EPR signals were observed in the absence of light irradiation. When exposed to light irradiation, the intensity of both DMPO-O2•− and DMPO-•OH adducts for the CuO/tourmaline composite were stronger than those of pure CuO. The results clearly verified that the CuO/tourmaline composite could produce a higher level of reactive species than pure CuO. The more reactive species the composite produced, the higher photocatalytic activity the composite exhibited.

The photocatalytic performance of the CuO/tourmaline composite was also tested under different conditions. The composite with the synthesis temperature of 180 °C exhibited optimum photocatalytic activity (Supporting Information File 1, Figure S2), implying that the synthesis temperature of 180 °C could optimize the 0D/2D CuO structure and interfacial interaction between CuO and tourmaline. The initial solution pH affected the photocatalytic performance mainly via changing the adsorption of dye molecules onto photocatalysts (Figure 7a), as adsorption occurred firstly during the photodegradation reactions [42].

With a combination of the analyses carried out above, a plausible mechanism for strengthening the photocatalytic degradation activity of CuO with tourmaline was proposed and shown in Figure 9. The e− in the valence band (VB) of CuO was excited with the generation of e−/h+ pairs under light irradiation (Equation 1). Tourmaline facilitate the transfer of photoinduced e− via its strong electric ﬁeld (Equation 2). The separated e− reacted with the oxygen dissolved into water with the formation of O2•− (Equation 3). Meanwhile, a portion of h+ reacted with water to generate •OH (Equation 4). Reactive species of h+, •OH, and O2•− synergistically participated in the organic oxidation reactions (Equation 5). The exposure of more adsorption-photoreactive sites and the efficient utilization of photoinduced e−/h+ pairs enabled by tourmaline contributed to the enhanced photocatalytic activity.

A CuO/tourmaline composite with 0D/2D CuO architecture was successfully obtained by using a facile hydrothermal process. The CuO/tourmaline composite exhibited superior photocatalytic activity toward organic oxidation, which could be ascribed to the fact that tourmaline can simultaneously enable the formation of 0D/2D CuO to increase the quantity of adsorption-photoreactive sites and promote the effective utilization of photogenerated e−/h+ pairs. The present study offered a facile strategy for the construction of a 0D/2D CuO structure and the design of tourmaline-based functional composite photocatalysts for the oxidation of organic pollutants.

This work was supported by the China Scholarship Council (201908360233). D. D. Dionysiou also acknowledges support from the University of Cincinnati through a UNESCO co-Chair Professor position on “Water Access and Sustainability” and the Herman Schneider Professorship in the College of Engineering and Applied Sciences.

© 2020 Yu et al.; licensee Beilstein-Institut.
This is an Open Access article under the terms of the Creative Commons Attribution License (https://creativecommons.org/licenses/by/4.0). Please note that the reuse, redistribution and reproduction in particular requires that the authors and source are credited.
The license is subject to the Beilstein Journal of Nanotechnology terms and conditions: (https://www.beilstein-journals.org/bjnano) 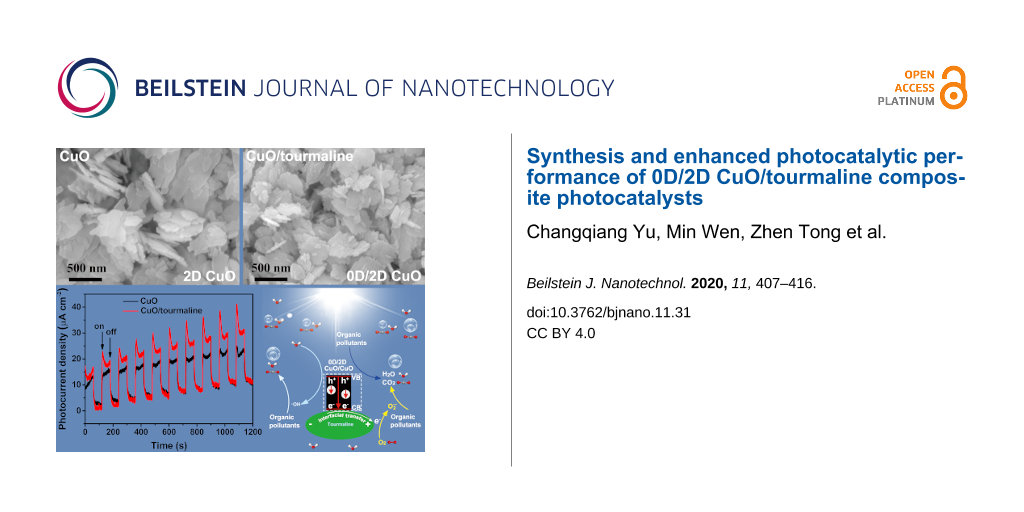