All articles from this author
R. P. Singh


All articles from this author
Ashutosh Pandey


All articles from this author
Anjana Pandey

The following is a correction to the section “XRD of TiO2 and Ag-doped TiO2”, which contains a new Figure 1, an analysis of the data in the new Figure 1, and the raw data files used to create Figure 1 (included as Supporting Information File 1). This correction is being issued in response to questions raised regarding the originally published experimental results in Figure 1. This issue was investigated further by the authors who were able to retrieve the correct raw data files associated with their materials. Although significantly different from the originally published, incorrect experimental data, the interpretation of the new, correct data does not affect any other sections or any other results of the article.

The XRD analysis was performed with X-pert High score plus software to determine the phase structure of the three samples by comparing the measured XRD pattern to powder diffraction patterns in the International Centre for Diffraction Data (ICDD) database. The characteristic peaks of the TiO2 nanoparticle sample indicate an anatase phase (2θ = 24.8°, 44.5°, compared with JCPDS file no. 00-021-1272) with some indication of a rutile phase (2θ = 27.5°, compared with JCPDS file no. 00-021-1276), revealing the effect of calcination.

As expected from previous works on similar Ag-doped TiO2 nanoparticles [1-5], the diffraction peaks associated with Ag were not easily observed. Similar to these prior works, the presence of Ag did not cause changes in the TiO2 anatase crystalline structure and no significant high intensity peaks related to fcc Ag were observed. This can be explained as the mean silver peak can be masked by the TiO2 layer.

However, by comparing the ratio of the intensity of the peaks, we can conclude that a peak at 2θ ≈ 38°, indicating the presence of Ag (compared to JCPDS file no. 00-0004-0783), was weak but not absent for the 7 wt % Ag-doped TiO2 nanoparticle sample. This result corresponds to a prior work where it was reported that 3.5 wt % Ag-doped TiO2 calcined at 500 °C did not show any peaks relating to Ag, although very low intensity peaks related to Ag were observed for the sample calcined at 600 °C [6].

In a previous work, it was found that the intensity of the anatase peaks decreased in comparison to the rutile peaks as the annealing temperature increased; and after annealing at 800 °C, complete rutile TiO2 phase was obtained [7]. It was previously reported that a mixture of anatase and rutile TiO2 nanoparticles has higher photocatalytic activity than pure anatase or pure rutile TiO2 nanoparticles under UV-light excitation [8]. Furthermore, it was shown that calcination of the nanoparticles could increase the crystallinity of TiO2, which leads to a decrease in the photo-excited e− –h+ recombination, and thus, to an increase in the photocatalytic activity of TiO2 [9].

© 2020 Gupta et al.; licensee Beilstein-Institut.
This is an Open Access article under the terms of the Creative Commons Attribution License (http://creativecommons.org/licenses/by/4.0). Please note that the reuse, redistribution and reproduction in particular requires that the authors and source are credited.
The license is subject to the Beilstein Journal of Nanotechnology terms and conditions: (https://www.beilstein-journals.org/bjnano) 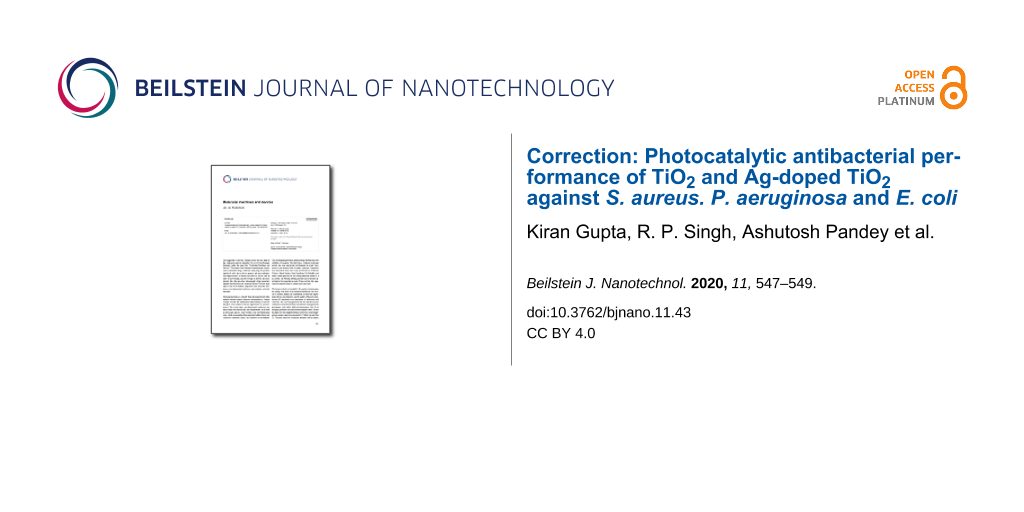