The high light-harvesting ability of quantum dots (QDs) plays an eminent role in the performance of solar cells. In this study, we synthesized Ag-Zn-Ga-S-Se-based alloyed QDs by colloidal hot injection and characterized them. The X-ray photoelectron spectrum analysis confirms the +1, +2, +3, −2, and −2 oxidation states of, respectively, Ag, Zn, Ga, S, and Se in the QDs, and the energy-dispersive X-ray spectrum analysis confirms the 1:1:1:1.5:1.5 stoichiometric ratio of, respectively, Ag, Zn, Ga, S, and Se. These two results indicate the formation of I-II-III-VI3-type alloyed crystals (AgZnGaS1.5Se1.5 nanocrystals). TEM image analysis reveals the QD nature of the synthesized Ag-Zn-Ga-S-Se nanocrystals. The X-ray diffraction pattern confirms the hexagonal structure. Due to the near-infrared light absorption capability, the synthesized QDs were used as the sensitizer to fabricate QDSCs. The fabricated QDSCs were characterized by using electrochemical impedance spectroscopy and photovoltaic performance studies. The fabricated QDSC have superior electrochemical activity with a photoconversion efficiency of 4.91%.

Human life depends on various forms of energy. Approximately 13 terawatts of energy are required to maintain the current lifestyle of the world’s population [1]. Our primary source of clean abundant energy is the sun. The amount of energy received from the sun is about twice of that obtained from all non-renewable resources.

Photovoltaic (PV) cells or solar cells are considered a good solution to the raising energy demands. Third-generation PV cells show advantages such as high theoretical photoconversion efficiency (PCE = 44%) [2], low cost, and flexibility. QDSCs have been considered a candidate for PV cells [3] because of the good optoelectronic properties of colloidal QDs [4-7]. At present, QDSCs have reached 14.4% efficiency. In QDSCs, QDs are added to the metal oxides. Our earlier reports demonstrated that porous TiO2 nanofibers possess an enormous surface area for the maximum absorption of QDs [8-10].

For the past decades, binary or ternary QDs based on lead and cadmium have been used as sensitizers in QDSCs. However, due to the high toxicity and low efficiency, research moved to group I-III-VI QDs such as Cu-In-Se, Cu-In-S, Ag-In-Se, Ag-In-S, Ag-Ga-S, and Ag-Ga-S. Even though their light-harvesting capability is still limited by a high number of surface trap state defects [11,12]. In order to minimize the number of these defects, a wide-bandgap material, such as ZnS or ZnSe, is deposited on group I-III-VI QDs. Zhang et al. over coated a ZnS layer [13,14] on Cu-In-S and Cu-In-Se QDs to obtain highly efficient sensitizers for QDSCs. Hua Zhang et al. doped Zn into AgInS2 and obtained Zn-Ag-In-S QDs. The QDSCs assembled by using these QDs exhibited a PCE of 4.50% [15]. The authors reported that the incorporation of zinc improved the optical properties and the PCE of AgInS2 QDs. Halder et al. reported the effect of doping Zn into a AgInSe2 host [16]. Recently, Larsen et al. reported that, due to the appropriate bandgap (1.6–1.8 eV), AgGaSe2 is a wide-range light absorber in thin film solar cells [17]. Tianya Bai et al. [18] examined that ZnS-coated AgGaS2 nanocrystals (AgGaS2/ZnS core–shell nanocrystals) have a tunable bandgap and PL colors. Hence, they have application potential in optoelectronic devices.

Herein, we synthesized, for the first time, Ag, Zn, Ga, S, and Se-based alloyed QDs (AZGSSe QDs) and investigated the optoelectric and morphological properties. Due to the near-infrared (NIR) light absorption, the QDs were used as sensitizers to fabricate QDSCs. The QDSC constructed by using AZGSSe QD-sensitized TiO2 nanofibers (AZGSSe/TiO2) as the photoanode showed a PCE of 4.91%.

Ag-Zn-Ga-S-Se QDs (AZGSSe) were prepared by a colloidal hot injection method. It was done according to the following procedure: 0.048 g of S and 0.118 g of Se were mixed well with 5 mL of DDTh, and 5 mL of OAM and stirred for 4 h to form a SSe stock solution. 0.143 g of AgCl, 0.136 g of ZnCl2, 0.176 g of GaCl3, 10 mL of OAM, and 2 mL of DDTh were refluxed at 100 °C for 30 min. The temperature was gradually increased up to 200 °C and the pre-prepared SSe stock solution was rapidly injected under continuous stirring. The mixture was maintained at 200 °C for 10 min and quickly poured into cold methanol to form AZGSSe QDs. After purification purification via centrifugation, the QDs were dispersed in 5 mL chloroform.

A pre-prepared TiO2 nanofiber (NF) paste was coated on FTO glass via the doctor blade method, which was followed by sintering at 450 °C for 30 min as described earlier [8-10]. The glass plate was dipped in 0.12 M of titanium tetrachloride solution at 70 °C for 30 min and was then rinsed with distilled water thoroughly and dried at 60 °C. After that, the electrode was soaked for 24 h with a MPA/acetonitrile solution 3:7 (v/v). This substrate was then immersed into the colloidal AZGSSe QD solution for 48 h to obtain the AZGSSe-sensitized TiO2 NF-based photoanode.

Earlier reports revealed that Cu2S is a low-cost and efficient counter electrode (CE) for QDSCs [2,19,20]. Hence, in this work Cu2S was chosen as the CE material. The CE was fabricated as described in [8]. At first, Cu2S NPs were prepared by a hydrothermal method using ʟ-cysteine and copper(II) chloride. Then the Cu2S paste containing 95% of Cu2S and 5% of PVdF in NMP was coated onto FTO glass. This substrate was then dried at 60 °C in vacuum for 12 h to obtain the Cu2S-based CE. CE and photoanode were sandwiched with a 60 µm hot melt spacer at 110 °C for 50 s and clipped together. After that, the electrolyte was injected between the electrodes through pre-drilled holes in the CE to get QDSCs.

The crystalline structure and size of the synthesized QDs were examined by X-ray diffraction (Riganku Ultima IV XRD spectrometer with nickel-filtered Cu Kα radiation with a step width of 0.02°) High-resolution transmission electron microscopy was carried out on a JEOL JSM-7600F. The electronic states of the elements and their atomic ratio in the prepared samples was analyzed by using XPS (Kratos AXIS Ultra DLD) and EDX (Bruker Nano XFlash detector attached to the HRTEM). Optical properties were examined by using a UV–vis–NIR spectrophotometer (Perkin Elmer L-650 UV) and a photoluminescence spectrofluorometer (Jobin Yvon Horiba Nanolog). Impedance analysis of the fabricated QDSCs was conducted by using a CH instruments 760 A electrochemical workstation at applied frequencies of 100 kHz to 1 MHz with 10 mV AC voltage recording the Nyquist plots. The J–V curves were measured by using an AM 1.5 solar simulator (Oriel instruments 67005) of 100 mW·cm−2 power density. This power density was calibrated with the photocurrent of the reference cell (crystal Si capped by an IR cut filter). Fill factor (FF) and photoconversion efficiency (η) were calculated by using the standard equations reported elsewhere [21].

The UV–vis absorbance spectrum of colloidal AZGSSe QDs (Figure 4a) reveals a wide absorption range in the near-infrared (NIR) region. This confirms the NIR photoactive nature of the synthesized QDs. Figure 4b depicts the Tauc plot [30] of the synthesized QDs. From this, the bandgap energy of AZGSSe QDs was found to be 1.37 eV. This confirms that the QDS can serve as effective sensitizers.

The PL emission spectrum of AZGSSe QDs (Figure 4c) was recorded at an excitation wavelength of 295 nm. In this spectrum, a single emission peak is detected at 830 to 880 nm range with a FWHM of 20 nm. This signifies defect-free crystals [31,32]. Figure 4d shows the PL decay spectrum of AZGSSe QDs fitted with a biexponential function (

), where τ1 and τ2 are the carrier life times, and α1 and α2 are the relative amplitudes of the respective carrier lifetime. The average life (τs) of the AZGSSe QDs was calculated to be 42.64 ns [33].

The UV–vis absorption spectrum of the AZGSSe/TiO2-based photoanode in comparison with TiO2 NFs shown in Figure 6a. It can be observed that AZGSSe/TiO2-based photoanode has a light absorption in the NIR region. This signifies that AZGSSe/TiO2 is an efficient photoanode for QDSCs and it produces more electron–hole pairs, which helps to improve the photocurrent density. Time-resolved photoluminescence (TRPL) studies were carried out to evaluate the electrons decay time of AZGSSe/TiO2. The decay curve was fitted with a biexponential function [33] and it is shown in Figure 6b. From this, the average lifetime (τs) of AZGSSe/TiO2 was found to be 18.92 ns. Then the rate constant (Keff) of the electron transfer is calculated to be 2.9 × 107 s−1 from the equation:

Figure 6c shows the PL emission spectra of the AZGSSe/TiO2 NF-based photoanode in comparison with TiO2 NFs. It reveals that the PL intensity of AZGSSe/TiO2 NFs is quenched. This is due to the enhanced electron transfer from the conduction band of AZGSSe QDs to TiO2 NFs with minimized charge recombination rate [35-37].

The electron transfer mechanism of the fabricated QDSC was examined by using impedance analysis. The impedance spectrum plotted in the form of a Nyquist plot (Figure 7) was fitted with the equivalent circuit shown in the inset of Figure 7. The corresponding parameters are shown in Table 1. The Nyquist plot consists of two hemispheres, namely the high-frequency region hemisphere and the low-frequency region hemisphere. The high-frequency region hemisphere is associated with the charge transfer resistance (R1) that appears at the interface of electrolyte and counter electrode. The low-frequency region hemisphere is attributed to the charge transfer resistance (R2) appearing at the interface of electrolyte and photoanode. The sheet resistance (Rs) is the resistance of the intercept of the real axis. Similarly, CD1 is the double layer capacitance in the counter electrode/electrolyte interface and CD2 is the capacitance in the photoanode/electrolyte interface. In this work, we focused on R2, and it was observed to be 26.78 Ω. This low value of R2 reveals that the AZGSSe/TiO2 NF-based photoanode has superior electrochemical activity. It can boost charge recombination and transport electrons readily, which contributes to the enhanced performance of the QDSC.

Ag-Zn-Ga-S-Se alloyed QDs with a diameter of 5.11 nm were synthesized by a hot injection method. From the EDX analysis, its stoichiometric ratio was found to be 1:1:1:1.5:1.5. The oxidation sate of the elements in the synthesized QDs are examined to be +1, +2, +3, −2 and −2 for, respectively, Ag, Zn, Ga, S, and Se. Optical analysis revealed the excellent optical properties of the synthesized QDs. Because of their good NIR light absorption, the synthesized QDs were loaded onto TiO2 NFs, which then formed the photoanode of a QDSC. The fabricated QDSC shows an improved PCE of 4.91%. This is due to the enormous light-harvesting capacity of AZGSSe QDs and the enhanced electron transfer from AZGSSe QDs to TiO2 NFs.

The authors are grateful to the CIF of Pondicherry University and Sprint testing solution Mumbai for providing the instrumentation facilities.

© 2022 Kottayi et al.; licensee Beilstein-Institut.
This is an open access article licensed under the terms of the Beilstein-Institut Open Access License Agreement (https://www.beilstein-journals.org/bjnano/terms), which is identical to the Creative Commons Attribution 4.0 International License (https://creativecommons.org/licenses/by/4.0). The reuse of material under this license requires that the author(s), source and license are credited. Third-party material in this article could be subject to other licenses (typically indicated in the credit line), and in this case, users are required to obtain permission from the license holder to reuse the material. 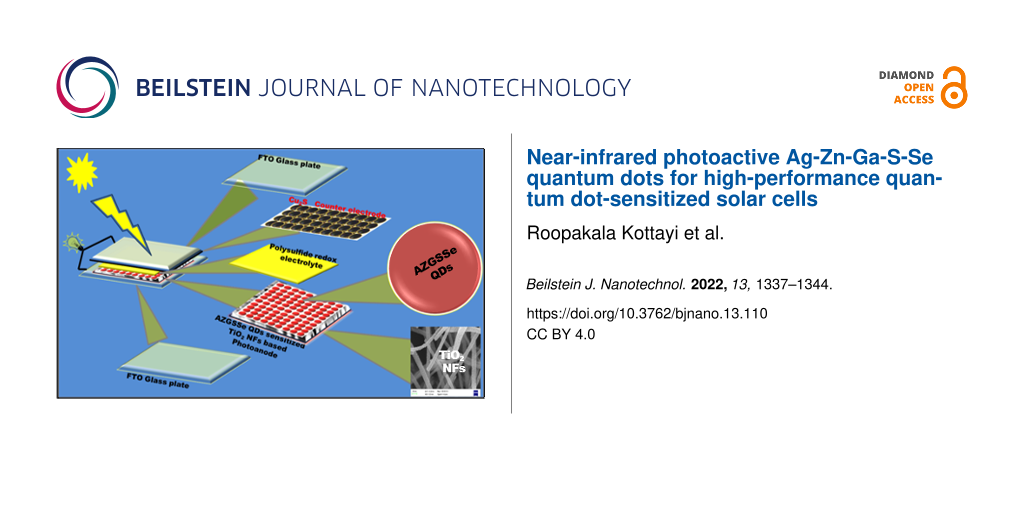