All articles from this author
Haijun Zhou


All articles from this author
Guangxiang Li


All articles from this author
Bin Tang

This article is part of the thematic issue "Physics and optical applications of all-dieletric nanostructures".

To explain the phenomenon of all-optical modulation of quantum cascade laser (QCL), and explore the physics in QCL’s gain medium which consists of multiple of dielectric nanostructures with high refractive index under light injection, we modified the 1½-period model to calculate values of electron population and lifetime in each subband which is separated by the nanostructures, optical gain, current and number of photons in the cavity of a mid-infrared QCL modulated with near-infrared optical injection. The results were consistent with an experiment, where the injected light increases the electron population and lifetime, but does not affect the optical gain obviously. Our study can be helpful for optimizing its use and dielectric nanostructure design.

To examine the all-optical modulation of QCLs, we must consider the output characteristics of QCLs. In the four-level system, the carrier distribution is described by the full rate equations (FRE) [18] as Equations 1–4 shows, where n0 is the cavity index, gc is the gain cross section, c is the speed of light. ΓP is the optical confinement factor per stage, α is the laser total loss. NP the total number of stages, 1/τk,i is the rate of electron scattered from subband k to subband i, 1/τsp is the spontaneous emission rate of the upper laser subband, α is the cavity absorption coefficient, β is the rate of spontaneous emission getting into the laser modes, nk is the k-th subband population, S is the photon population in the cavity, and the laser upper and lower subbands are denoted by Equation 4 and Equation 3, respectively. The numerical methods solving FRE are excellently recorded in [18]. By taking into account the effects of optical injection [19] and electron temperature [20,21], the full rate equation is modified to obtain a more accurate numerical simulation of the output characteristics of QCLs. In all-optical modulation, light directly illuminates the facet of the active region of the QCL. Injection of a large amount of energy will inevitably change the original energy balance and carrier distribution and, of course, generate heat. The injected light will excite the valence band electrons to transition to the conduction band and produce electron-hole pairs. The lifetimes of electrons and holes are quite different [22] and result in accumulation of holes, and then, in order to maintain electrical neutrality of the laser, the electrons in the current are added to the conduction band [23]. Moreover, the fluctuation of threshold current caused by the light injection is around tens of mA [19], which is much smaller than the threshold current. Therefore, all-optical modulation can only be achieved when the QCL works near or above the threshold. It is worth noting that, when the wavelength of the modulating light is close to the band gap of the active region of the QCL, most of the injected light energy excites the electrons in the valence band to transition to the conduction band and then to the upper laser subband, thereby increasing the power of the modulating light. However, with a decrease in the modulated laser wavelength, its energy becomes greater than the band gap between the valence band and the lower laser subband of the conduction band of the QCL active region, with the excess energy exciting the electrons to a higher energy level or high kinetic state (high kinetic state means high electron temperature) and generating heat through electron–electron and electron–lattice scattering, which suppresses the laser output. And such a compression can be explained by the hot electron backfilling effect [20,24,25], which is caused by an increase of the electron temperature. The electrons with high kinetic state increase the number of electrons in the lower laser subband by backfilling and inhibit the population inversion. As a result, the light output is suppressed.

In this paper, we further modify the rate equation to facilitate a numerical study of the all-optical modulation of QCLs. A flow chart of the numerical calculations for the all-optical modulation of QCLs is shown in Figure 1. Here, we modify our numerical model in two cases. The first case is when modulating the laser wavelength to greater than the lower laser subband of the active region of the QCL. The injected laser will then not be able to excite the electrons in the valence band to the laser subband of the conduction band, and the transition of electrons in the conduction band will be affected by the electric field. Therefore, we can allocate all the photoexcited electrons to the conduction band, and obtain the electron number of each subband of the conduction band by solving the partial rate equations (PRE) [17]. Whether the scattering rate and electron population of each subband can be further calculated by the FRE is judged by whether or not the electrons of each subband converge. Numerical studies of the FRE involved here have been previously reported [18]. The second case is when the modulating laser wavelength is less than that of the lower laser subband of the active region of the QCL. The injected laser light may then excite the electrons to the laser subband or high kinetic state, which requires correct allocation of the photoexcited electrons to each subband; the fluctuation of the electron temperature in the conduct band is an important parameter for characterizing this change. First, the photoexcited electrons are evenly distributed into each subband to complete the initial conditions for the calculations. Through multiple iterations during which the electron number of each subband converges, the electron distribution is approached by energy conservation and the hot electron backfilling effect which increase the lifetime of electrons in the lower laser energy level as described in Equation 11, and finally the scattering rate and number of electrons in each subband are obtained.

The number of photoexcited electrons, which is closely related to the number and area density of photons, forms the basis of the subsequent numerical calculation. When the modulated QCL is illuminated on the facet of its active region at an angle of 30°, almost all the laser energy is absorbed [19], so we disregard this loss, and the initial photoexcited electrons are generated from the valence band.

Furthermore, the number of photons produced during the hole lifetime τp can be described as:

where c is the speed of light, λinj is the wavelength of the injected light, h is Planck’s constant, and P is the power of the modulated laser.

Then, the area density of photons is obtained as:

where l is the length and w is the width of the laser cavity. All these parameters are known except τp, and τp can be obtained from the experimental data in reference [19], which gives the relationship between Δλ and injection power; Δλ is the variation in laser wavelength λ caused by optical injection. The relationship between Δλ and the refractive index n0 can be described as

where Δn0 is the variation in n0.

We know that Δn0 is induced by electron-hole pairs, and can be described by the following equation [12]:

Combining Equations 2, 3 and 4, we obtain the following:

where e is the charge of an electron, λ is the wavelength of the laser, N and P are the numbers of the electrons and holes, ε0 is the permittivity in a vacuum, and

are the effective electron and hole masses, respectively.

When the wavelength of the injected light is 820 nm, the electrons in the cavity are heated and enhance the backfilling effect, which increases the lifetime of electrons in the lower laser energy level (A3) as described by the following equation [20]:

where T is the electron temperature without injected light, ΔT is the variation in electron temperature induced by the injected light, Ebf is the backfilling energy, and τbf is the backfilling lifetime. τ3,i and τ’3,i are the electron lifetimes in A3 with and without injected light, respectively, and Kb is the Boltzmann constant. To determine ΔT, we assume that all the energy of the optically excited electrons, except those that overcome the bandgap, converts to the kinetic energy of the electrons in the cavity. So the kinetic energy of a single optically excited electron E can be described by the following function (it can be verified by the well-known Fermi–Dirac distribution function):

And E can be described as

where Eg is the bandgap. So the average variation in electron temperature can be described as

The values of the key device parameters used in analyzing are summarized in Table 1.

In this simulation, the laser we studied is the same as in [26], which is a standard 35-stage In0.52Al0.48As/In0.53Ga0.47As type-I four-level Fabry–Perot QCL based on a two-phonon-resonance design [27]. Current injection efficiency is defined as the ratio of current to total current injected into the upper subband of the QCL in the active region, which is close to 56%. The QCL total optical loss is assumed to be 23.3 cm−1, including a 14.3 cm−1 waveguide loss [27] and a 9 cm−1 mirror loss for a waveguide refractive index of 3.4. Although there are many bound states in the active region, most electrons remain in several low energy levels. So seven confined subbands are sufficient for the calculation, and here Ai (i = 1, 2, 3, 4, 5, 6, 7) represents the i-th subband in the active region, as shown in Figure 2. Our simulation used an external bias electrical field of 53 kV/cm, which was above the threshold value, and the temperature of the electrons and cavity were 300 K and 30 K, respectively.

Optical gain in the cavity during optical injection was also studied. As shown in Figure 5, although the wavelength of injected light is different, the variation of the optical gain is the same and there is less variation. This can be understood from Figure 3 in which the difference in electron number between A4 (upper laser subband) and A3 (lower laser subband) states is almost constant with changes in optical injection power. This difference is indirect proportional to optical gain, indicating that the modulation is not caused by changing the gain.

In this paper, to explore the phenomenon of all-optical modulation of QCLs, we studied the characteristics of a mid-infrared QCL using near-infrared optical injection of several mW at wavelengths of 820 nm and 1550 nm. A modified classical 1½-period model was established to characterize the process of optical injection, and optically excited electrons and optically induced temperature enhancement are considered in our model. The following parameters were calculated: electron population and lifetime in each subband, optical gain, current and photons in the cavity, which were consistent with the experimental results. We found that for injected light at wavelengths of 820 nm or 1550 nm, electron population and lifetime increases, but does not affect optical gain. Furthermore, injected light at a wavelength of 1550 nm always enhances the current, but at 820 nm only does so when the power of the injected light is greater than 2 mW. Finally, the calculations show that numbers of electrons and electron lifetime in the cavity are of great importance in all-optical modulation of QCLs.

The authors would like to thank Yuan-kun Sun, University of Electronic Science and Technology of China, for the help on this work.

© 2022 Wei et al.; licensee Beilstein-Institut.
This is an open access article licensed under the terms of the Beilstein-Institut Open Access License Agreement (https://www.beilstein-journals.org/bjnano/terms), which is identical to the Creative Commons Attribution 4.0 International License (https://creativecommons.org/licenses/by/4.0). The reuse of material under this license requires that the author(s), source and license are credited. Third-party material in this article could be subject to other licenses (typically indicated in the credit line), and in this case, users are required to obtain permission from the license holder to reuse the material. 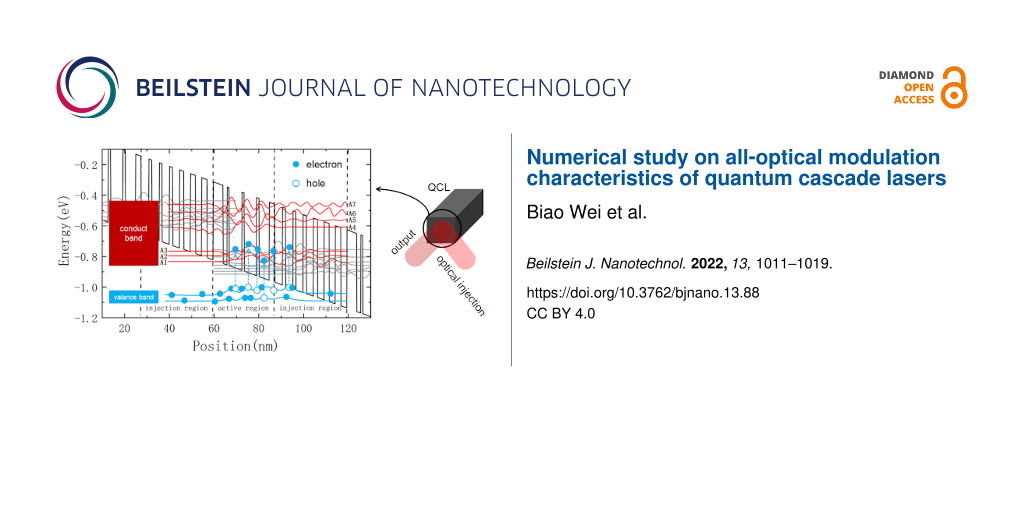