All articles from this author
Adnan Ahmed


All articles from this author
Lan Xu

In recent years, due to the characteristics of high specific surface area, good electrical conductivity, stable physical and chemical properties, as well as fast charge and discharge, the application of electrospun nanofiber-based materials in supercapacitor electrode materials has attracted great attention [1,2]. Although traditional single-needle electrospinning (SNE) devices are widely used and simple to operate, their industrialization is limited due to the extremely low output [3]. Compared to SNE, multineedle electrospinning improves the output to a certain extent, but the mutual interference of electric fields between needles affects the spinning process, and the needle blockage problem has not been solved [4]. Needle-free electrospinning devices fundamentally solve the needle blockage problem and can prepare micro/nanofibers more effectively [5].

In our previous works, some self-made free surface electrospinning (FSE) devices were proposed for high-throughput fabrication of nanofibers [15]. Especially, the spherical section FSE (SSFES) device developed by our research group can be used to prepare nanofibers with higher yield and quality compared with other works [16]. However, in the SSFES device, the nanoparticles in the spinning solution easily sink down, resulting in an uneven distribution of nanoparticles in the obtained fibers [17]. Due to their stable physical and chemical properties, good biocompatibility, excellent photoelectric properties, non-toxicity, strong antibacterial activity and low price, ZnO nanoparticles can be used in various fields to improve the performance and technical indicators of products [17-20]. An electrospinning device with multiple air inlets (EMAI) was designed and developed in this paper to prepare functional nanofibers containing ZnO nanoparticles in batches, as shown in Figure 1. The device enabled the ZnO nanoparticles contained in the spinning solution to maintain uniform dispersion in the batch preparation process of nanofibers by means of air flow produced through multiple pores. The airflow reduces the agglomeration of nanoparticles, thus yielding nanofibers with uniform ZnO loading. In addition, experiments and theoretical analysis were used to discuss the spinning mechanism of this new device for the batch preparation of nanofibers, and the optimal spinning parameters were determined.

Firstly, 4.5 g PAN and 44 g DMF solution were weighed separately by an electronic balance (XJ120A, Shanghai Precisa Co., LTD), mixed and placed on an unheated magnetic stirrer (HJ-6A, Gongyi Yuhua Instrument Co., LTD.) for stirring for 24 h. Then 1.5 g ZnO nanoparticles were added into PAN solution, where the mass ratio of PAN to ZnO was 3:1, and the mixture was stirred for 4 h to obtain the homogeneous ZnO/PAN spinning solution. The mass fraction of PAN to spinning solution was 9 wt %, and that of ZnO to spinning solution was 3 wt %.

The spinning solution viscosity was measured by a viscosity instrument (SNB-1, Shanghai Ruifang Co., LTD.). The spinning solution conductivity was tested by a conductivity tester (DDS-307A, Shanghai INESA Analytical Instrument Co., LTD.). The yield of nanofibers fabricated by EMAI was determined using an electronic balance (XJ120A, Precisa LTD.). The nanofiber morphology was investigated by a scanning electron microscopy (SEM, Hitachi S4800, Hitachi LTD.), and Image J software (National Institute of Mental Health) was used to characterize the fiber diameter distribution by random selection of 100 nanofibers from ten SEM images of each sample. Simultaneously, the element distribution on the sample surface was characterized by a desktop SEM (TM3030, Hitachi LTD.).

Maxwell 3D was used to simulate the electric field distribution of EMAI under different voltages (40, 50, and 60 kV). A simplified 3D model of the porous copper spinneret with a diameter of 70 mm and a height of 45 mm is shown in Figure 1b. Ten holes with a diameter of 2 mm were drilled into the spinneret. The specific simulation parameters were as follows: The conductivity of copper was 5.8 × 1011 µS/cm, the viscosity of the spinning solution was 377 mPa·s, and the conductivity of the spinning solution was 797 µS/cm [21].

Figure 2 shows that, in the EMAI process, most of the jets were ejected from the edge of the spinneret, the edge of the groove, and the air inlets. This was because the edge part would produce higher electric field intensity due to the tip effect, while the air inlets would produce more jets due to the auxiliary effect of air flow. When the air flow rate was 150 m3/h (Figure 2a), because of the excessive air flow, a large number of bubbles were generated on the solution surface, and many droplets appeared on the receiving drum, which greatly affected the spinning effect. When the air flow rate was 100 m3/h (Figure 2b), there were still many bubbles on the solution surface and some droplets on the receiving drum, illustrating that the air flow was still too large. When the air flow rate was 50 m3/h (Figure 2c), the whole solution surface became convex, and no obvious droplets appeared between the nanofibers on the receiving drum. When there was no air flow (0 m3/h) (Figure 2d), the number of jets obviously decreased and almost all of them were concentrated at the edge of the spinneret. Therefore, the air flow rate of 50 m3/h was more conducive to spinning.

Based on the above results, the spinning effects of this device under different applied voltages at the optimal air flow of 50 m3/h were studied. It was found that, when the applied voltage was 40 kV (Figure 2e), less jet formation and low spinning efficiency were achieved. When the voltage was 60 kV (Figure 2f), more but unstable jets were formed due to too high electric field intensity, which would result in coarser fibers and fiber bundles. Therefore, the optimal applied voltage value was 50 kV (Figure 2g), due to the stable jets generated under this voltage and the obtained fibers with smaller diameter and more uniform particle distribution.

Figure 1a shows the force analysis of point A on the free surface of spinning solution and point B on the jet formed during the EMAI spinning process when ignoring air resistance and environmental interference. The spinning solution was assumed to be an incompressible ideal fluid [22]. According to previous studies [23], under a high voltage electric field, in point A there is the joint action of mass force (Ph) caused by the fluctuation height of spinning solution, surface tension (Ps) of the spinning solution, and electric field force (PE) produced by the applied voltage. These forces determine whether a jet could be formed at point A. The polymer fluid surface tension would make the liquid surface shrink and bend as much as possible, and the change of external electric field would interact with the accumulated charges on the polymer fluid surface, making the charge density on the charged fluid surface uneven. Accordingly, the formulas to calculate these three forces are as follows:

In addition, the centripetal force F1 at point B is generated by the horizontal component of the viscous force (τ), which could weaken the instability of the jets. The resultant vertical upward force F2 generated by the applied electric field force FE and the vertical component of viscous force would push the jets upward. The formulas of the resultant forces (F1 and F2) could be written as follows [24]:

where α is the angle between the viscous force and the vertical direction, EB is the electric field intensity at point B, and qB is the charge determined by the spinning solution properties at point B, which is generally an integer multiple of the primary charge (1.60 × 10−19 C).

In addition, the morphology and corresponding diameter distribution of nanofibers produced at different applied voltages with the optimal air flow rate of 50 m3/h were investigated. As shown in Figure 4a, when the spinning voltage was 40 kV, the electrospun nanofibers had fewer particles, and the average nanofiber diameter was 491.41 ± 93.75 nm. When the spinning voltage was 50 kV (Figure 4b), the nanoparticles in the nanofibers were not only abundant but also evenly distributed, and the average nanofiber diameter was the smallest (497.63 ± 87.02 nm). When the spinning voltage was 60 kV (Figure 4c), the nanofibers were mostly in the form of fiber bundles, the particle agglomeration was serious, and the average nanofiber diameter was the coarsest (563.08 ± 104.89 nm). This was because the higher the voltage, the greater the electric field force applied to the jet, and the more the jet was stretched, making the fiber diameter smaller. However, when the voltage was too high, the electric field force was too large, so that the spinning speed was too fast, and the jets were unstable and could not be fully stretched, resulting in an increase in fiber diameter and the easy formation of fiber bundles. This result is also consistent with that in Figure 2e–g. Furthermore, it could be clearly seen from Figure 4d that the agglomeration of nanoparticles in the fibers prepared by the SSFSE at 50 kV was very obvious (see the red circle), proving the advantages of EMAI.

Figure 5a displayed the yields of ZnO/PAN nanofibers obtained with different spinning voltages at an air flow rate of 50 m3/h, illustrating that the higher the voltage, the higher the nanofiber yield, which further proved the force analysis in Figure 1a and the analysis results in Figure 2e–g. The EDS analysis result of nanofibers exhibited in Figure 4b showed that the sample contained four elements C, N, O and Zn, indicating that ZnO was successfully loaded on the PAN nanofibers. Zn was uniformly distributed, as shown in Figure 5b.

An electrospinning device with multiple air inlets (EMAI) was used to prepare ZnO/PAN nanofibers in batches. It was found that the distribution of ZnO nanoparticles in the composite nanofibers obtained by EMAI was more uniform than that by SSFSE. This was because the air flow through multiple pores enabled the ZnO nanoparticles in the spinning solution to maintain uniform dispersion in the EMAI spinning process and reduced the agglomeration of nanoparticles. The influence of air flow rate on the spinning effect was investigated through experiments, which showed that too large or too small air flow rate was not conducive to obtaining high-quality functional nanofibers. When the air flow rate was 50 m3/h, only few microbubbles were generated, thus yielding ZnO/PAN nanofibers with uniform ZnO nanoparticle distribution.

In addition, the influence of the spinning voltage on the EMAI processes as well as the quality and yield of ZnO/PAN nanofibers were investigated experimentally and theoretically. The theoretical and experimental results were consistent and showed that as the spinning voltage increased, the number of jets generated on the spinning solution surface increased. However, an excessive spinning voltage (60 kV) would make the jets unstable and the spinning speed too fast, resulting in thicker fibers and fiber bundles. When the voltage was 50 kV, the spinning process was stable, and the quality and yield of ZnO/PAN nanofibers were high. This provides a convenient and effective method for batch preparation of functional nanofibers uniformly loaded with nanoparticles, thus expanding the practical application of functional nanofibers in the future.

A comprehensive review on electrospun nanohybrid membranes for wastewater treatment

© 2023 Wei et al.; licensee Beilstein-Institut.
This is an open access article licensed under the terms of the Beilstein-Institut Open Access License Agreement (https://www.beilstein-journals.org/bjnano/terms), which is identical to the Creative Commons Attribution 4.0 International License (https://creativecommons.org/licenses/by/4.0). The reuse of material under this license requires that the author(s), source and license are credited. Third-party material in this article could be subject to other licenses (typically indicated in the credit line), and in this case, users are required to obtain permission from the license holder to reuse the material. 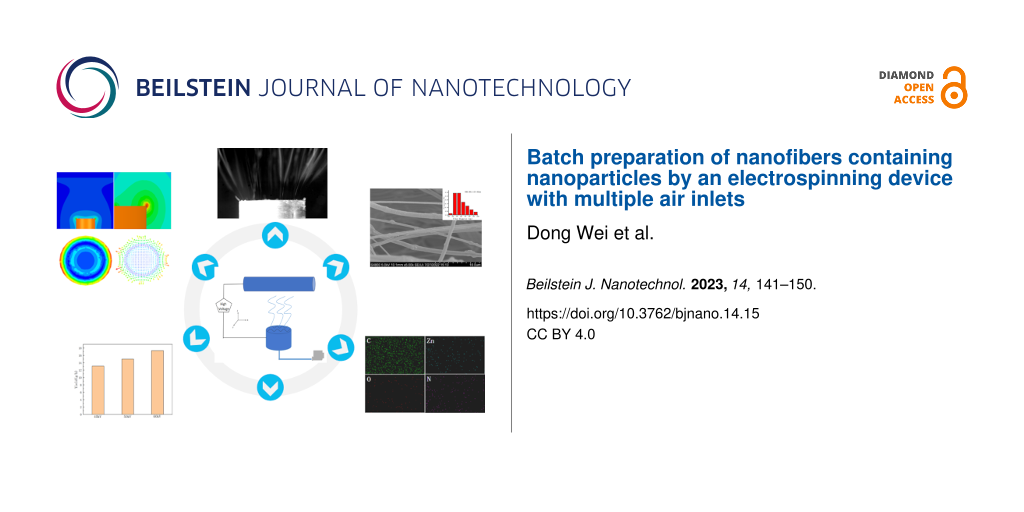