All articles from this author
Amir Hussain


All articles from this author
Atowar Rahman

Nanocrystalline lead selenide (PbSe) thin films were prepared on glass substrates by a chemical bath deposition method, using sodium selenosulfate (Na2SeSO3) as a source of Se2− ions, and lead acetate as a source of Pb2+ ions. Trisodium citrate (TSC) was used as a complexing agent. PbSe films were prepared at various deposition temperatures while the pH value was kept fixed at 11, and the effect on the resulting film properties was studied by X-ray diffraction (XRD), X-ray fluorescence (XRF), scanning electron microscopy (SEM) and optical absorption studies. The structural parameters, such as the lattice constant (a), crystallite size (D), dislocation density (ρ) and microstrain (ε) were evaluated from the XRD spectra. It was found that average crystallite size, as calculated from Scherrer’s formula, increased from 23 to 33 nm as the deposition temperature was varied from 303 to 343 K. The dislocation density and microstrain were found to vary inversely with the crystallite size, whereas the lattice constant was found to increase with an increase in crystallite size. The optical absorption spectra of the nanocrystalline PbSe films showed a blue shift, and the optical band gap (Eg) was found to increase from 1.96 to 2.10 eV with the decrease in crystallite size.

Lead selenide (PbSe) with its narrow band gap (Eg = 0.27 eV) [1] is an important semiconductor of the IV–VI lead chalcogenides group. PbSe has a large exciton Bohr radius (46 nm), which offers the opportunity to achieve strong size quantization at relatively large crystal size [2,3]. PbSe has wide applications in long and mid-wavelength infrared detectors, optical amplifiers, mid-infrared lasers, as thermoelectric materials, and as Pb2+ ion selective sensors [4-7]. Among the various techniques used to prepare PbSe thin films, such as vacuum evaporation [8], microwave heating [9], pulsed laser deposition [10], electrochemical atomic layer epitaxy [11], and electrodeposition [12], the chemical bath deposition method [13,14] is relatively simple and cost-effective, and has the advantage that it allows control over deposition parameters such as the pH, the concentration of ions, deposition temperature, etc., with great ease.

Lead selenide thin films were deposited by using lead acetate (Pb(CH3COO)2) and freshly prepared sodium selenosulfate (Na2SeSO3) as Pb2+ and Se2− ions source, respectively, in the presence of trisodium citrate (TSC) as a complexing agent. The Na2SeSO3 solution was prepared by mixing 3 g selenium powder with 30 g anhydrous sodium sulfite in 150 ml of distilled water under constant stirring for 8–10 h at 353 K [15].

To prepare thin films of PbSe, 0.5 M Pb(CH3COO)2 solution was prepared. To this solution was added 1 M TSC solution, and then the pH of the solution was adjusted to 10.80 by drop-wise addition of KOH. Finally, Na2SeSO3 was added and the pH of the final deposition bath was adjusted to 11. The glass substrates were vertically immersed in the deposition bath at the desired temperature. After a deposition period of 2 h, the substrates were taken out, rinsed in distilled water and dried. Four different sets of PbSe films were prepared at different temperatures (328, 333, 338, and 343 K). The as-deposited films were uniform, continuous, and pinhole free. These were specularly reflective, and extremely adherent to the substrates. However the PbSe films prepared at room temperature (303 K) were found to be pale brown in appearance.

The X-ray fluorescence study (XRFS) was performed on an AXIOS spectrometer (DY 840) for elemental analysis of the as-prepared films and optical absorption studies were carried out using a UV–vis spectrophotometer (VARIAN CARY 300 scan) in the wavelength range 360–900 nm. The thickness of the PbSe thin films was measured by the multiple beam interferometer technique.

A PbSe thin film is formed when the ionic product of Pb2+ and Se2− ions exceeds the solubility product of PbSe (≈10−38 at 300 K) [16]. The deposition process is based on the slow release of Pb2+ and Se2− ions in the solution. The complexing agent trisodium citrate controls the Pb2+ concentration and slowly releases Pb2+ ions into the solution. The proposed reaction mechanism for formation of PbSe thin films is as follows,

where A is trisodium citrate.

The average crystallite size of PbSe thin films prepared at different temperatures calculated using Scherrer’s formula [17] was found to increase from 23 to 33 nm with an increase of temperature from 303 to 343 K, as shown in Figure 2. The rate of the deposition reaction increases at higher temperature and the crystallites grow faster resulting in a larger size.

where “d” is the spacing between the planes in the atomic lattice, and (hkl) are the Miller indices. The lattice constant values are found to be slightly different for different orientations of the same film. The probable explanation for this was given by Mothura et al. [18]. Therefore, corrected values of the lattice constants were determined from the intercept of the Nelson–Riley plots. The Nelson–Riley curve is plotted between the calculated “a” for different planes and the error function [19]

and the corrected value of “a” is obtained by extrapolating the plot to θ = 90°. A typical Nelson–Riley plot for a PbSe thin film is shown in Figure 3.

The lattice parameter is observed to increase slightly from 6.112 to 6.129 Å with deposition temperature. All the values of lattice constant of the as-prepared PbSe thin films were found to be different from the values of the bulk material (6.124 Å, JCPDS 06-0354). The deviation in the values of the lattice constant of the as-prepared PbSe films from the bulk value indicates the presence of strain in the films. The strain in the prepared PbSe films may arise due to the change of lattice nature and concentration of native imperfections during the film formation.

where “n” is a factor, which when equal to unity gives the minimum dislocation density, and “D” is the average crystallite size. The average microstrain (ε) developed in the as-prepared PbSe films was calculated by using the relation [21]

where “β” is the full width at half maximum and θ is the Bragg angle.

Scanning electron microscopy gives valuable information regarding the shape and size of the grains on the surface of the deposited thin films. Figure 5a shows the SEM image of PbSe thin films prepared at 303 K (room temperature), and reveals cube-like structures, which are aggregated. From the SEM image of PbSe prepared at 338 K (Figure 5b) and 343 K (Figure 5c), it was observed that the PbSe thin films consisted of spherical grains and were homogenous, without any voids or cracks.

The crystallite size obtained by XRD is equivalent to the mean size of the domains that scatter X-rays coherently [22]. The grain size measured from SEM images is the surface morphology of grains that are agglomerated crystallites, leading to larger values of grain size.

Figure 6 shows the XRF spectra of PbSe thin films prepared at 333 K. The spectrum exhibits prominent peaks of the Pb Lβ, Pb Lα1, Pb Lα2 and Se Kα1 lines showing the presence of Pb and Se in the prepared films.

Nanocrystalline PbSe thin films have been successfully deposited at different temperatures (328 to 343 K) above room temperature (303 K). The grains were found to be spherical in shape and the crystallite sizes found from XRD increased from 26 to 33 nm as the deposition temperature was increased from 328 to 343 K. The optical band gap of the PbSe films was found to increase from 1.96 to 2.10 eV with the decrease in crystallite size, which is in accordance with the quantum confinement effect. The dislocation density and microstrain were found to decrease with increase in deposition temperature and, hence, crystallite size, indicating the improvement of PbSe thin films.

Fabrication and characterization of Si1−xGex nanocrystals in as-grown and annealed structures: a comparative study

© 2012 Begum et al; licensee Beilstein-Institut.
This is an Open Access article under the terms of the Creative Commons Attribution License (http://creativecommons.org/licenses/by/2.0), which permits unrestricted use, distribution, and reproduction in any medium, provided the original work is properly cited.
The license is subject to the Beilstein Journal of Nanotechnology terms and conditions: (http://www.beilstein-journals.org/bjnano) 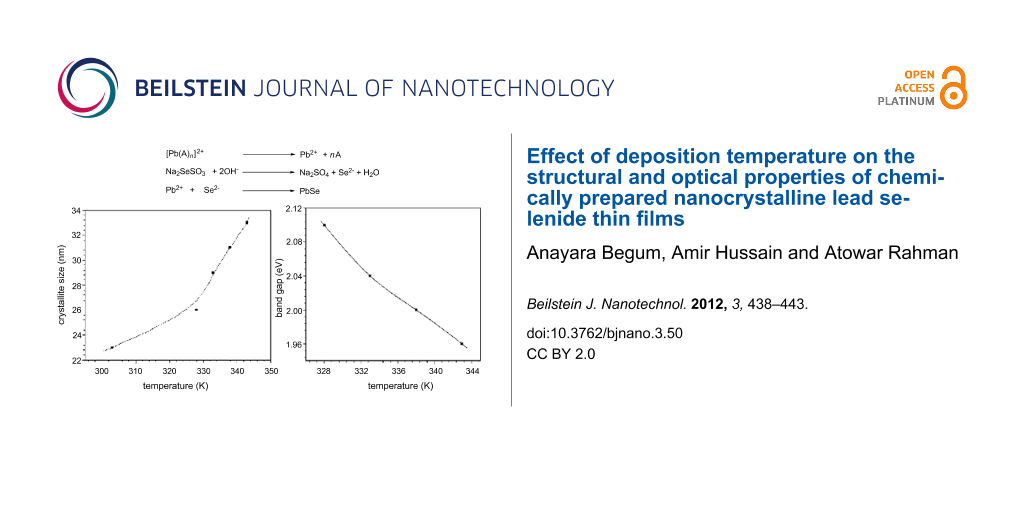