All articles from this author
François-Xavier Perrin


All articles from this author
Dinh Lam Nguyen

This article is part of the Thematic Series "Nanomanipulation and environmental nanotechnology".

The objective of this work was to develop new coating materials based on poly(ethyleneoxide) (PEO), which was grafted onto polysilazane (PSZ) by hydrosilylation. Three types of PEO with different molecular weights (350, 750, 2000 g/mol) were studied. The kinetics and yields of this reaction have been surveyed by 1H and 13C NMR spectroscopy. The PEO grafting-density onto PSZ by hydrosilylation increases with a reduction of the S–H/allyl ratio and a decrease of the PEO chain-length. The PEO-graft-PSZ (PSZ-PEO) hybrid coatings, which can be used to prevent the adhesion of marine bacteria on surfaces, were applied by moisture curing at room temperature. The anti-adhesion performance, and thus the anti-fouling activity, of the coatings against three marine bacteria species, Clostridium sp. SR1, Neisseria sp. LC1 and Neisseria sp. SC1, was examined. The anti-fouling activity of the coatings depends on the grafting density and the chain length of PEO. The shortest PEO(350 g/mol)-graft-PSZ with the highest graft density was found to have the best anti-fouling activity. As the density of grafted PEO(750 g/mol) and PEO(2000 g/mol) chains onto the PSZ surface is approximately equal, the relative effectiveness of these two types of PEO is controlled by the length of the PEO chain. The PEO(2000 g/mol)-graft-PSZ coatings are more efficient than the PEO(750 g/mol)-graft-PSZ coatings for the bacterial anti-adhesion.

To date, polysilazanes with the general formula –(SiR1R2–NR3)n–, have been mainly used as ceramic precursors Si/C/N for high-temperature applications [1-3]. The Clariant Company has developed formulations based on polysilazanes that could crosslinked by humid air through hydrolysis and condensation reactions [4,5]. This method was used to prepare coatings of thicknesses from 0.3 to 50 micrometers that have an excellent resistance against corrosion and abrasion because of their exceptional adhesion to a variety of substrates (glass, polycarbonate, aluminium, steel, etc.) combined with a high brightness, a non-stick surface, and the resistance to heat, fire and UV irradiation.

Poly(ethylene oxide) or poly(oxyethylene) (PEO) is a non-toxic polymer, which is used as a surface-modification agent, because it is effective in reducing bio-adhesion, i.e., protein adsorption, or the adhesion of bacteria and cells. The environmentally friendly coatings obtained by the grafting of PEO onto PSZ are a promising way to prevent the deposition of marine fouling materials onto the hulls of ships [6]. Several factors have been hypothesized to explain the anti-fouling property of these surfaces. These include the hydrophilicity [7], the mobility, the large exclusion volume in water and the effect of steric repulsion [8-11]. The effect of the molecular weight and the grafting density of PEO on the anti-fouling capacity has been widely studied [12-14].

Several methods to modify surfaces with PEO chains were investigated. These include the covalent grafting [15,16], the chemical adsorption [17], the formation of self-assembled monolayers [18,19], plasma treatment [12,20] or the use of supercritical CO2 [21,22]. Kingshott et al. have demonstrated that the grafting of PEO onto the substrates by covalent bonding is necessary for an anti-fouling activity [23]. Herein, we propose a new synthetic strategy to prepare hybrid materials based on polysilazane (PSZ), which have an enhanced resistance against bacteria adhesion, through the incorporation of allyl PEO monomethyl ether by covalent grafting.

Materials. Monomethoxy poly(ethylene oxide) glycol (MPEG) with average molecular weights of 350 g/mol, 750 g/mol and 2000 g/mol and Karstedt’s catalyst were purchased from Sigma-Aldrich. All three types of MPEG were dried under vacuum before usage. The polysilazane precursor, polylmethyhydrosilazane containing triethoxysilanes, was provided by the Clariant Company. The molecular structure of the polysilazane precursor is described on Figure 1. PSZ was used as received without any further purification. Allyl bromide (allyl-Br) purchased from Acros was distilled under a nitrogen atmosphere in the dark and subsequently kept in darkness before usage. Allyl-Br is sensitive to light and may polymerize on exposure to light.

Protocol of the marine bacterial adhesion. Three marine bacteria species, bacillus Clostridium sp. SR1, micrococcus Neisseria sp. LC1 and micrococcus Neisseria sp. SC1, were used for the adhesion studies. The culture media was Vätäänen nine-salt solution (VNSS). The PSZ and PSZ-PEO coatings, which were moisture-cured at ambient conditions, were previously sterilized in methanol, immersed in VNSS that contained the bacteria and were finally incubated at 30 °C for 24 h. Then coatings were rinsed in sterilized phosphate buffered saline to remove the non-adhered bacteria. The adhered bacteria were removed from the surfaces using an ultrasonic cleaner for 5 min with sterilized synthetic sea water. The number of adhered bacteria (CFU/cm2) was determined by using a Colony Counter BZG30.

Synthesis of allyl-PEO. Allyl-terminated monomethyl poly(ethylene oxide) (allyl-PEO) ethers were synthesized via the reaction of MPEG with an excess amount of allyl-Br [24]. The equation of this synthesis reaction is described in Scheme 1.

Grafting of allyl-PEO molecules onto the PSZ chain

The kinetics and yields of the grafting reactions have been surveyed by 1H and 13C NMR spectroscopy. Figure 2 shows the 1H NMR and 13C NMR spectra of the mixture of the reactants and of the grafting products. In Figure 1 and in Scheme 2, it is found that the structure of the grafted group ≡Si–CH2–CH2–CH2–O– of PSZ-PEO is very close to that of the group ≡Si–CH2–CH2–CH2–N– of the PSZ precursor. In the 1H NMR spectra, the resonance peaks of the protons Ha' and Hb' of PSZ-PEO therefore appear at chemical shifts very similar to those of the protons ≡Si–CH2–CH2– (0.62 ppm) and ≡Si–CH2–CH2– (1.5 ppm) of PSZ, respectively. Likewise, the chemical shift of the proton Hc' of PSZ-PEO is very close to that of protons –O–CH3 and –O–CH2–CH2–O– of PEO, situated at around 3.4 ppm (Figure 2A). The same difficulties in identifying the grafted PEO are encountered during the analysis of the 13C NMR spectra. This is because the 13C NMR chemical shifts of the carbon atoms at positions Ca’ and ≡Si–CH2–CH2–, Cb’ and ≡Si–CH2–CH2–, Cc’ and –O–CH2–CH2–O– of PEO are very close, as shown in Figure 2B. In order to circumvent theses complications, the kinetic investigation of the hydrosilylation reaction was carried out by following the decrease of the intensity of the allyl-proton resonances in the 1H NMR spectra.

The evolution of the 1H NMR spectra of the reactant mixture over the reaction time is shown in Figure 3. These results verify that the intensities of the 1H MNR peaks attributed to the allyl group (–CH = at 5.87ppm, CH2 = at 5.22ppm and –CH2− at 3.99ppm) [24] decrease continuously. This diminution can be used to confirm the participation of the allyl group in the hydrosilylation during the grafting of allyl-PEO onto the PSZ chain.

After few hours of the grafting reaction, we recognized the appearance of two new 1H NMR peaks at chemical shifts of 5.9 and 6.2 ppm. The intensities of two new peaks increase with reaction time. These two peaks have been verified to match the =CH− protons of the cis- and trans-isomers, respectively, of the propenyl ether group, which results from the isomerization of allyl-PEO [25] (Figure 4). In the 13C NMR spectrum (Figure 2), the position of the propenyl ether group has been recognized in the region of low fields (CH3− at 9.2ppm, −CH= at 145.6ppm and =CH−O at 101.2ppm). The isomerization of the allyl-PEO was therefore considered as a secondary reaction that takes place simultaneously to the hydrosilylation. The optimum conditions for the grafting of PEO were defined to reach a high selectivity toward the hydrosilylation in comparison to the isomerisation.

in which ICH2=(0) is the integral of the CH2= resonance in the 1H-NMR spectrum of the initial mixture and ICH2=(t), ICH,cis(t) and ICH,trans(t) are the integrals of the CH2=, cis-CH=, and trans-CH= resonances at time t, respectively.

The conversions of all three types of allyl-PEO in the different reactions during grafting as well as the density of grafted allyl-PEO molecules onto the PSZ chain are listed in Table 1. It should be noted that the degree of hydrosilylation increases when increasing the Si–H/allyl ratio and decreasing the molecular weight of PEO. Contrary to this, the degree of isomerization reduces significantly when increasing the Si–H/allyl ratio. In particular, when Si–H/allyl = 26.5, the trans-isomer could not be identified for both allyl-PEO750 and allyl-PEO2000 in their 1H NMR spectra.

Figure 6 shows the influence of the length of the grafted PEO and of the Si–H/allyl ratio on the bacterial adhesion in VNSS media. Compared to the unmodified PSZ coating, all PSZ-PEO surfaces exhibit lower levels of bacteria adhesion. The inhibition efficiency varies inversely with the ratio of Si–H/allyl. It is remarkable that the PSZ-PEO350-10 surface shows the best inhibitory properties and leads to a reduction in the amount of adhered bacteria of approximately 70% for all three types of bacteria when compared to the pure PSZ coating. The anti-fouling activities of PSZ-PEO showed an increase in the sequence PEO750 < PEO2000 < PEO350. This result may seem to disagree with several previous studies showing that a PEO2000 chain is most effective against bacterial adhesion [12,26,27]. However, all PSZ-PEO350 coatings have a PEO grafting density that is higher than that of PSZ-PEO750 and PSZ-PEO2000 at the same Si–H/allyl ratio (see Table 1). The higher PEO grafting density of PSZ-PEO350 could explain its higher anti-fouling activity. These results are also in accordance with the works of Jeon et al. [9,10]. Based on a surface–protein interaction model these authors demonstrated that the surface density of the PEO chains have a greater effect than the length of the PEO chains in inhibiting bacterial adhesion. As the grafting density of PEO750 and PEO2000 onto PSZ is approximately equivalent, the effectiveness of these two types of hybrid materials is controlled by the chain length of PEO. Consequently, the PSZ-PEO2000 surfaces are more efficient than the PSZ-PEO750 surfaces in regarding to the anti-fouling activity.

The bacterial adhesion inhibition depends on the grafting density and the chain length of PEO. The role of the grafting density is more important than that of the chain length. The PSZ-PEO350 coatings prepared at a ratio SiH/allyl = 10 with the highest grafting density show the best anti-fouling activity for all three studied marine bacteria. While the densities of PEO750 and PEO2000 chains on the PSZ surface are practically equal, the PSZ-PEO2000 coatings are more efficient in anti-fouling than those with PSZ-PEO750. It is indispensable to find the optimal conditions for grafting allyl-PEO2000 on the PSZ chain in order to improve the degree of hydrosilylation and to increase the density of grafted allyl-PEO2000 molecules in PSZ-PEO anti-fouling surfaces.

The authors would like to thank the Clariant Company for its kind supply of the polysilazane. The contribution of Dinh Hung Lan Tran, Ngoc Tuan Nguyen, Thi Trang Nguyen, University of Danang - University of Science and Technology, with their experimental work on the marine bacterial adhesion is also very much acknowledged.

A 3D-polyphenylalanine network inside porous alumina: Synthesis and characterization of an inorganic–organic composite membrane

© 2013 Nguyen et al; licensee Beilstein-Institut.
This is an Open Access article under the terms of the Creative Commons Attribution License (http://creativecommons.org/licenses/by/2.0), which permits unrestricted use, distribution, and reproduction in any medium, provided the original work is properly cited.
The license is subject to the Beilstein Journal of Nanotechnology terms and conditions: (http://www.beilstein-journals.org/bjnano) 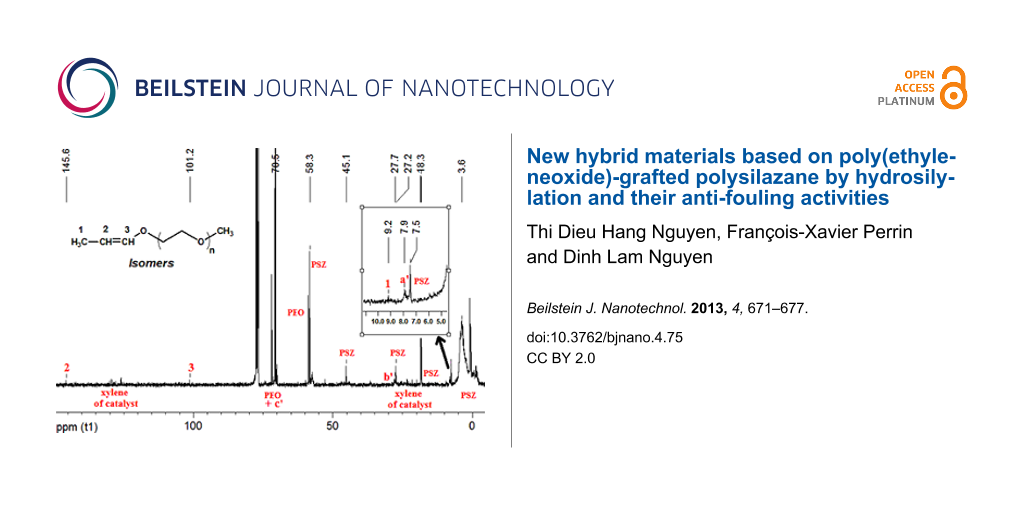