A facile and one pot synthesis of silver nanoparticles with narrow size distributions using silver nitrate and a copolymer 1 from N-isopropylacrylamide (NIPAM) and mono-(1H-triazolylmethyl)-2-methylacryl-β-cyclodextrin acting as reductant and stabilizer without using any additional reducing agent is reported. The reduction was carried out in aqueous solution under pH neutral conditions at room temperature. The results of dynamic light scattering analysis and transmission electron microscopy show adjustable particle sizes from 30–100 nm, due to variation of silver nitrate concentration, the polymeric reducing and stabilisation agent concentration or reaction time. The spherical structure of the silver nanoparticles has been confirmed by UV–vis spectroscopy and transmission electron microscopy. The optical properties of the nanoparticles have also been characterized by fluorescence spectroscopy. The formed spherical particles are stable in aqueous medium at room temperature over a period of several weeks. Furthermore the changes in the optical properties of the nanoparticles due to thermo induced volume phase transition behavior of the thermoresponsive cyclodextrin containing polymer 1 have been characterized by UV–vis spectroscopy.

Recently the interest in noble metal nano scaled particles increased significantly. Due to their unique physicochemical and microbacterial properties silver nanoparticles (AgNP) are one of the most studied in the field of nanotechnology and have a broad range of applications including optics, catalysis and biomedical science [1-4]. Many strategies have been established in the formation of metal nanoparticles, for example chemical or electrochemical reduction, irradiation or thermal decomposoion [5-8].

Most of these methods require environmental and biological risky reducing agents and solvents such as sodium borohydride, hydrazine or dimethylformamide. Consequently, the interest in a green nanoparticle synthesis using natural reducing agents like saccharides or cyclodextrin (CD) in environmentally benign solvents increased [9-13]. In the synthesis of metal nanoparticles the use of polymers as external steric or electrosteric stabilizer is an established method to control the particle growth, limit oxidation and stabilize the nanoparticle dispersion [5,14-16]. However, there are only a few examples for polymers described which act simultaneously as reducing and stabilization agent in aqueous medium. Typical examples are polyacrylamide, poly(sodium acrylate), polyethylene glycol, chitosan or soluble starch [11,17-19]. However, up to now polymers bearing CD attached have not been used for the preparation of AgNP’s. Thus, the scope of our present investigation was a new and facile synthesis of stable silver nanoparticles in aqueous medium. In this present work stable spherical silver nanoparticles are prepared in water using a copolymer 1 from N-isopropylacrylamide and mono-(1H-triazolylmethyl)-2-methylacryl-β-cyclodextrin [20] as reduction and steric stabilization agent without any additional reduction agent or energy source. Silver nitrate has been reduced under pH neutral conditions at room temperature. In this green one pot synthesis neither commonly used toxic reduction agent nor additional energy sources are needed. Through variation of the silver nitrate or polymer concentration silver nanoparticles of different sizes can be prepared.

Long time stable silver nanoparticles were synthesized by the reaction of silver nitrate with an pH neutral aqueous solution of β-cyclodextrin containing polymer 1 at room temperaure. The copolymer 1 was prepared from N-isopropylacrylamide and mono-(1H-triazolylmethyl)-2-methylacryl-β-cyclodextrin via free radical polymeraization (Scheme 1). The molar weight Mn = 2·103 g/mol was measured by aqueos SEC-MALS (D = 3.2). Through variation of the silver nitrate or polymer concentration silver nanoparticles of different sizes can be prepared. To avoid reduction of the silver salt by sodium ascorbate the microwave assisted click-type triazol-CD-monomer synthesis was carried out in the absence of copper(II) sulfate pentahydrate and sodium ascorbate compared to the origin literature, yielding in a mixture of 1,4- and 1,5-triazole regioisomers [21].

The color of the polymer solution changed during the reaction from colorless, over orange to brown (Figure 1) confirming the formation of the silver nanoparticles 2.

As clearly seen from Figure 4 silver nanoparticles 2 with a spherical morphology were formed. The average size of particles 2a prepared with 1 mM AgNO3 and 10 mM polymer bound CD 1 was determined to be 12.5 ± 2.3 nm with a narrow size distribution. With an increasing molar ratio (1:1) of salt precursor to polymer bound CD 1 an increase of the particle size 2d up to 100 ± 20 nm and a broader size distribution due to agglomeration is observed. With decreasing polymer concentration the stabilizing capacity is reduced and the polymer cannot restrict the particle size effectively (Table 1).

Dynamic light scattering experiments were carried out to determine the particle size and the size distribution as function of molar ratio. Hydrodynamic diameters dn up to 110 nm prove the formation of silver nanoparticles. Analog to the TEM experiments an increase of the particle size and a broadening of the size distribution with an increasing molar ratio of salt precursor (AgNO3) to polymer bound CD 1 due to agglomeration of the AgNP’s (Table 1) was observed. Particle sizes determined by DLS compared to TEM experiments are on average higher due to the fact that in DLS measurements besides the metal particle the polymer shell is measured, too.

Zeta potential experiments were carried out to investigate the stability of the AgNP’s. Measured zeta potentials of the polymer stabled silver nanoparticle solutions 2 show a slightly negative charge (Table 2) indicating a steric stabilization mechanism. The AgNP’s are stable in aqueous medium for weeks. No bathochromic shift of the absorption maximum in the UV–vis absorption spectrum or an increase in the hydrodynamic diameter could be detected and confirm the stability of AgNP’s 2.

Additionally the thermoresponsive optical and solution properties of the polymer stabled silver nanoparticles 2 have been investigated. By heating the AgNP’s 2 above the lower critical solution temperature (LCST) of the NIPAM containing copolymer 1 (33 °C), a volume phase transition will take place, which should effect the optical and solution properties, respectively stability of the silver nanoparticles. As seen in Figure 4a the cloud point TC of the native cyclodextrin containing polymer 1 (33 °C) increases up to TC = 36 °C with a broadened volume transition due to formation of AgNP’s 2a.

This shift of the cloud point TC is a consequence of the immobilization of polymer 1 on the metal nanoparticle 2 surface due to coordination of silver with the nitrogen atoms of the NIPAM residue respectively hydroxy group of the CD function in 1 [25]. This adsorption suppresses the volume phase transition at higher temperatures [15]. Furthermore the thermoresponsive properties of nanoparticles 2 have been characterized by UV–vis absorption spectroscopy. Figure 4b shows the absorption spectra of a solution of particles 2a below and upon its LCST. The surface plasmon resonance band λmax = 450 nm at 25 °C is red shifted to λmax = 459 nm when the solution of 2a is heated about its LCST (40 °C). This bathochromic shift is a consequence of the change of the local environment (decreased distance of Ag particles and increased refractive index of the polymer) of the silver particles 2a due to the collapse of the polymer [25-27]. The changes in the thermoresponsive as well as the optical properties are fully reversible upon cooling to room temperature.

In summary, we present the facile one pot synthesis of long time stable silver nanoparticles using a copolymer from N-isopropylacrylamide (NIPAM) and mono-(1H-triazolylmethyl)-2-methylacryl-β-cyclodextrin acting as reductant and steric stabilizer. We have shown that silver nanoparticles can be prepared under mild conditions without using an external environmental and biological risky reducing agent, stabilizer or additionally energy. Spherical nanoparticles with different sizes have been prepared by altering the molar ratio of silver salt and polymer bound CD. Silver nanoparticles thus prepared are stable over weeks at room temperature and doesn’t appear to aggregate. Furthermore, we were able to show the thermoresponsive reversible changes of solution and optical properties, resulting in bathochromic shift of the surface plasmon resonance band and shift of the LCST to higher temperature.

All reagents used were commercially available (Sigma-Aldrich, Acros Organics) and used without further purification. β-CD was obtained from Wacker Chemie GmbH, Burghausen, Germany and were used after drying overnight with a vacuum oil pump over P4O10. N,N-Dimethylformamide (DMF) were purchased from Fluka, Germany. Dimethyl sulfoxide-d6 (99.9 atom % D) was obtained from Deutero GmbH, Germany.

1H NMR spectra were recorded on a Bruker Avance DRX 300 at 20 °C, shifts (δ) are given relative to signals caused by the solvent.

FTIR spectra were recorded on a Nicolet 6700 FTIR spectrometer equipped with an ATR unit.

Microwave-assisted synthesis was performed using a CEM Discover Synthesis Unit (monomode system). The temperature was measured by infrared detection maintained at a constant value by power modulation. Reactions were performed in closed vessels.

The absorption spectra were measured on a Specord 210 Plus UV–visible spectrophotometer equipped with a Thermo Scientific CD10 Heating Circulator bath. Fluorescence spectra were recorded on a Perkin Elmer LS55 luminescence spectrometer.

Zeta Potential and dynamic light scattering (DLS) experiments were carried out with a Malvern Zetasizer Nano; ZS ZEN 3600 at a temperature of 20 °C. The particle size distribution is derived from a deconvolution of the measured intensity autocorrelation function of the sample by a general purpose method (non-negative least squares) algorithm included in the DTS software.

Turbidity experiments were performed on a Tepper cloud point photometer TP1. The relative transmission of a laser beam with a wavelength of 670 nm was recorded for each experiment. The measurements were performed at a temperature range between 10 and 40 °C and a heating rate of 1 °C min−1 using Hellma Suprasil precision cells 110 Q-S. Critical solution temperatures derived from these experiments were determined at 50% relative transmission.

Mono-(6-azido-6-desoxy)-β-cyclodextrin was synthesized according to the known procedure [28].

Mono-(1H-triazolylmethyl)-2-methylacryl-β-cyclodextrin was synthesized according to the known procedure but without the addition of copper(II) sulfate pentahydrate and sodium ascorbate and the reaction time was elongated to 60 min [28].

For the synthesis of silver nanoparticles (2) AgNO3 and poly(N-isopropylacrylamide-co-mono-β-CD-methacrylate) (1) in different molar ratios (see Table 2) were dissolved in 5 mL ultrapure water under pH neutral conditions at room temperature and shaken for 15 min. The color of the polymer solution changed during the reaction from colorless, over orange to brown confirming the formation of the silver nanoparticles 2.

Beilstein Talk by Armin Gölzhäuser on October 7 – register for this free online talk!

© 2014 Maciollek and Ritter; licensee Beilstein-Institut.
This is an Open Access article under the terms of the Creative Commons Attribution License (http://creativecommons.org/licenses/by/2.0), which permits unrestricted use, distribution, and reproduction in any medium, provided the original work is properly cited.
The license is subject to the Beilstein Journal of Nanotechnology terms and conditions: (http://www.beilstein-journals.org/bjnano) 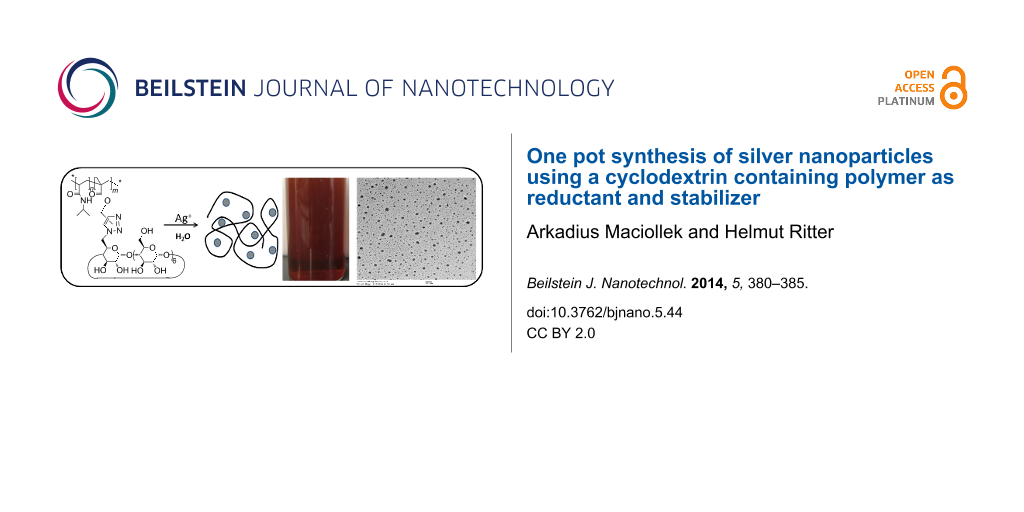