All articles from this author
Si-yi Hu


All articles from this author
Yin-ping Dou


All articles from this author
Tian-hang Liu


All articles from this author
Jing-quan Lin


All articles from this author
Yue Wang

This study investigates near-infrared region Ag2S quantum dots (QDs) and their nonlinear optical response under 532 nm nanosecond laser pulses. Our experimental result shows that nonlinear transmission is reduced from 0.084 to 0.04. The observed narrowing behavior of the output pulse width shows superior optical limiting. We discuss the physical mechanisms responsible for the nonlinear optical response of the QDs. The average size of the nanocrystals was 5.5 nm. Our results suggest the possibility of using these Ag2S QDs for photoelectric, biosensor, optical ranging, and self-adaptive technologies.

Quantum dots (QDs) are semiconductor nanostructures with a size from 3 to 10 nm [1]. Through tailoring their size and composition, the emission wavelength of the quantum dots can be tuned from 650 to 1250 nm. In the last ten years, the study and development of QDs has rapidly progressed, and also influenced other research areas, such as nonlinear optics, plasmonics and biosensors. The special optical properties of QDs include good resistance to photo-bleaching, large absorption cross section, long fluorescence lifetimes, high quantum yields, and luminescence emission with large Stokes shift [2]. The development of synthetic nanoparticles has facilitated research on the nonlinear behavior of QDs and shown the great potential of QDs for different applications [3,4]. The synthesis of QDs with nonlinear behavior has been accomplished in aqueous solution over the past two decades [5,6]. Recently, studies have reported on nonlinear optical properties of QDs. Given their potential for various applications, including nonlinear reflectivity, efforts have recently been devoted to identifying QDs with near-infrared region (NIR) emission, such as PbSe, PbS, and CuInS2 [7,8]. These are non-cadmium-based QDs, and the use of NIR light solves the autofluorescence problem through the reduction of the fluorescence background [9-11]. Previous research has demonstrated that Ag2S QDs may be good candidates for use as NIR emitters [12-19]. Ag2S QDs have a band gap of 1.1 eV, the appropriate narrow band gap for NIR emission, and a relatively large absorption coefficient, which may enhance the emission intensity. Therefore, Ag2S QDs provide a powerful route for improving the optical properties of semiconductor nanocrystals [20-22]. Ag2S QDs have a wide range of applications in optical and other research fields. The development of their synthesis method may facilitate their application in optoelectronic devices for light absorption, photoconductor cells, IR detectors and so on [21,23-28].

Various optical properties of semiconductor or metallic nanoparticles with different sizes and shapes, such as nonlinear absorption and scattering, have been investigated both theoretically and experimentally [29-35]. However, there is a lack of research on the nonlinear properties of laser-pumped NIR QDs. In this study, we report experimental results of nonlinear optical behavior of Ag2S QDs pumped by 532 nm nanosecond laser pulses. The results of spectral, spatio-temporal and pump waveform measurements from laser pump energy effect are presented in this study and explained on the basis of the nonlinear optics theory of nanoparticles.

Figure 1 shows the analysis of a sample of Ag2S nanocrystals dispersed in chloroform (CHCl3). The QDs were synthesized using the typical procedure published previously [20]. The sizes of the QDs were determined using a JEOL JEM-100cx transmission electron microscope (TEM) with an accelerating voltage of 80 kV. The TEM image of Ag2S is shown in Figure 1a. The particles are estimated to have an average diameter of 5–6 nm.

Figure 1a shows the absorption spectra of Ag2S QDs, measured by a scanning spectrophotometer (UV-3101PC from Shimadzu). Figure 1b shows the EDS spectra of Ag2S QDs clearly indicating Ag and S as constituents. The two sharp peaks at 0 and 0.15 keV have no relation to the Ag2S quantum dots, and are caused by a measurement error.

COMSOL Multiphysics 4.2a was used to simulate nonlinear optical characteristics for Ag2S QDs. Full-wave 2D analysis with Gaussian laser beam profile was employed. In order to reduce the needed computational resources, the model size was defined as 300 × 2000 nm, and the circles represent the quantum dots, as shown in Figure 2a. The following equations were used to describe the electric field (z-component):

where ω0 is the minimum waist, ω is the angular frequency, y is the in-plane transverse coordinate, and k is the wave number. The simulation parameters are shown in Table 1.

Figure 3 shows the experimental setup. The pump source is a 532 nm Nd:YAG laser with tunable pulse width [41]. The repetition rate was 10 Hz. Input pump pulses were focused with an f = 5 cm lens onto the center of a quartz cuvette with the sample solution. The optical path length of the focused pump beam passing through the sample medium was 2 cm, and the minimum waist of the laser is 3 ± 1 μm, the Rayleigh range of the laser is 53.12 μm.

Briefly, a Z-scan is one of the commonly utilized methods to measure nonlinear behavior. In this study, we used “open-aperture” and “closed-aperture” experiments according to Ganeev et al. [40]. Moreover, to check for the presence of nonlinear scattering, we used a photodiode placed at a fixed angle of about 40°. Insignificant nonlinear scattering of the laser beam was observed. Figure 4 shows the recorded Z-scan graphs of the Ag2S QDs. The laser pump energy ranged from 25 to 45 mJ.

In semiconductor QDs the absorption coefficient and cross section were found to be the major properties that are largely affected by the structure of the semiconductor. Table 2 and Table 3 list the fitted nonlinear optical parameter of Ag2S QDs for open-aperture Z-scan and closed-aperture Z-scan. The data in the table have an estimated error of 15%, which is caused by the energy fluctuations of the laser beam and air turbulences.

aAll values listed have an estimated error of 15%.

aAll values listed have an estimated error of 15%.

We measured the pulse energy values of the input and the transmitted laser beams to get a larger detecting area compared to the beam cross section. In our case, the dynamic transmission of the sample is determined by [41]:

Here, T0 is the normalized peak height, P is the pulse peak power, ω0 is the beam waist radius, Leff is the effective length in medium. The cross section σ was obtained by Equation 5:

Here, C is concentration, hν is the energy of incident light, N0 is a molecular number of quantum dots solutions. We set L as the constant optical path in the sample. As shown in Figure 5 we can see that the measured nonlinear transmission value is reduced from 0.084 to 0.04 when the input pulse energy increased. Figure 6a shows the waveforms of pulse and transmission pulse measured at the same pump energy level (40 mJ) by a two-channel digital oscilloscope of 200 MHz bandwidth (TDS 2024B).

It can be seen that the laser pulse width is 22.8 ns for a pump energy of 40 mJ. The transmission pulse is 10.5 ns for Ag2S QDs, and 21.08 ns for CHCl3. The transmission pulse of nanostructure particles is much shorter than that of the laser pulse. Figure 6b shows the transmission pulses at a different pump energy level. The waveforms became narrower as the laser pump energy increased. In a two-level system, such as this, when the laser pulse width is much larger than the particle relaxation time, multiple absorption will occur in the QDs. For Ag2S QDs, a large Ag protrusion is formed in the nanogap when the laser pump energy increased. Both electronic and ionic currents contribute to the absorption of the Ag2S QDs, which is affected by the pulse width waveforms. It could also be explained by an effect of nonlinear optical absorption that depends othe pump energy. This may reflect the dynamic behavior of gain or feedback mechanisms in the nonlinear absorption behavior of nanostructure particles. To exclude the possibility of a nonlinear behavior of nanocrystalline materials, we conducted the experiment for Ag2S QDs absorption measurement.

Figure 7 shows the output energy as a function of the input pump energy at different concentration values. The intensity of the absorption is defined as the ratio of the output energy to the input pump energy. It is shown that at the different pump levels, the Ag2S sample with a higher concentration (4.0 mg/mL) produced a smaller output energy than the Ag2S sample with a lower concentration (2.0 mg/mL). CHCl3 produced the lowest absorption intensity. Ag2S exhibited stronger absorption compared with CHCl3 as the pump energy increased. This can be explained by the fact that there are many impurities and electron–hole pairs in QDs. Also, when the laser interacts with QDs the dielectric constant of the medium surrounding the QDs will be changed. Ag2S has a narrow band gap, which leads to the strong absorption characteristics of Ag2S and which makes Ag2S particularly suitable for use in optical detectors and solar cells.

This work was supported by the National Natural Science Foundation of China (No. 11204020).

Oriented zinc oxide nanorods: A novel saturable absorber for lasers in the near-infrared

© 2015 Liu et al; licensee Beilstein-Institut.
This is an Open Access article under the terms of the Creative Commons Attribution License (http://creativecommons.org/licenses/by/2.0), which permits unrestricted use, distribution, and reproduction in any medium, provided the original work is properly cited.
The license is subject to the Beilstein Journal of Nanotechnology terms and conditions: (http://www.beilstein-journals.org/bjnano) 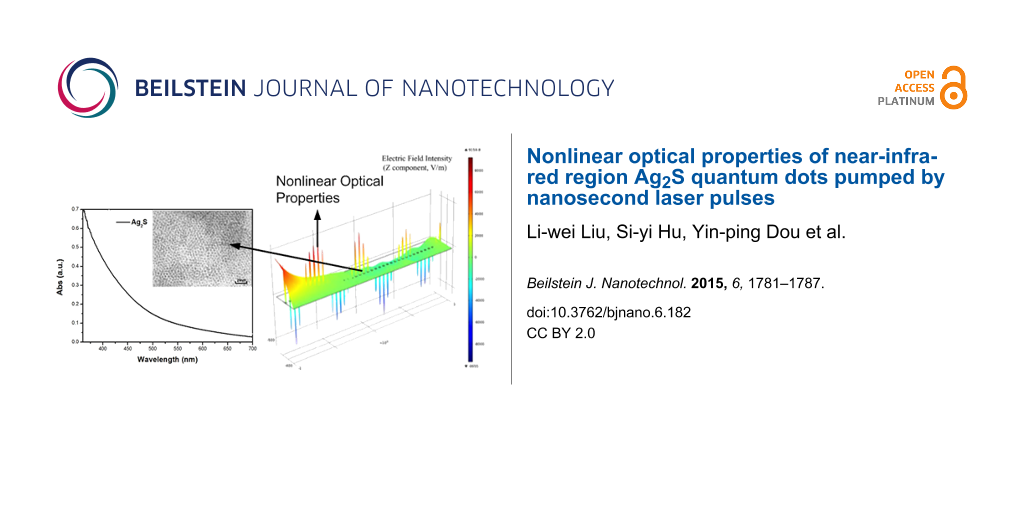