All articles from this author
Bharat Bhushan

The electroviscous effect has been widely studied to investigate the effect of surface charge-induced electric double layers (EDL) on the pressure-driven flow in a micro/nano channel. EDL has been reported to reduce the velocity of fluid flow and increase the fluid drag. Nevertheless, the study on the combined effect of EDL with large zeta potential up to several hundred millivolts and surface charge depenedent-slip on the micro/nano flow is still needed. In this paper, the nonlinear Poisson–Boltzmann equation for electrical potential and ion distribution in non-overlapping EDL is first analytically solved. Then, the modified Navier–Stokes equation for the flow considering the effect of surface charge on the electrical conductivity of the electrolyte and slip length is analytically solved. This analysis is used to study the effect of non-overlapping EDL with large zeta potential on the pressure-driven flow in a microchannel with no-slip and charge-dependent slip conditions. The results show that the EDL leads to an increase in the fluid drag, but that slip can reduce the fluid drag. When the zeta potential is large enough, the electroviscous effect disappears for flow in the microchannel under a no-slip condition. However, the retardation of EDL on the flow and the enhancement of slip on the flow counteract each other under a slip condition. The underlying mechanisms of the effect of EDL with large zeta potential on fluid drag are the high net ionic concentration near the channel wall and the fast decay of electrical potential in the EDL when the zeta potential is large enough.

With the development of advanced fabrication techniques, micro/nano electro-mechanical systems (MEMS/NEMS) have been realized and widely used. As a significant branch of MEMS/NEMS, micro/nanofluidic systems incorporating micro/nano pumps, valves, mixers, and channels have wide applications, such as micro heat exchangers, drug delivery systems, and lab-on-a-chip bioanalysis [1,2]. Understanding the fundamental mechanisms of the micro/nano fluid flow has inspired wide scientific interest in order to accomplish the manipulation and transportation of micro/nano fluid flow in these micro/nano fluidic devices. Theoretical and experimental studies show that some interfacial properties, such as surface charge, boundary slip, nanobubble and surface roughness, which can be neglected in macroscale fluidics, are believed to significantly affect the micro/nano fluid flow [3-13].

When a droplet of certain liquid contacts with a solid surface, the solid–liquid interface can become spontaneously charged based on different mechanisms, such as adsorption of ions or deionization [5,14-16]. The charged solid–liquid interface affects the ion distribution and causes local net charge in the liquid. Because of the electrostatic interaction, the counter-ions (ions having the opposite charge of the charged interface) are attracted to the interface and the co-ions (ions having the same charge as the charged interface) are repelled from the interface. As a result, the adsorbed layer, a thin layer consisting of immobile ions strongly attracted to the solid surface because of electrostatic interaction, is formed next to the solid surface. Above that, the diffuse layer, a thin layer consisting of mobile ions, is formed because of loose electrostatic force and thermal diffusion. Both the adsorbed layer and the diffuse layer constitute an electric double layer (EDL) [5,14-16]. To characterize the EDL, zeta potential is defined, and it refers to the electrical potential at the shear plane separating the immobile fluid layer strongly attracted to the solid surface from the rest of the liquid. The magnitude of zeta potential is reported to be up to several hundred millivolts [17-19]. For example, Ren et al. [19] found that the zeta potential of the deionized ultra-filtered (DIUF) water/silicon interface is high, up to −245 mV. In the EDL, the electrical potential exponentially declines, as a function of distance to the solid surface. Debye length κ−1 is the characteristic thickness of EDL, and is given by [5],

where ε is the dielectric constant of the electrolyte, ε0 is the vacuum permittivity, kB is the Boltzmann constant, T is the absolute temperature, n0 is the bulk ionic concentration of the symmetric electrolyte, z is the valence of the ions, and e is the elementary charge.

When liquid flows through a channel whose typical dimension is of similar order as the EDL thickness characterized by the Debye length, under the external driven-pressure, the net ion charge in EDL move towards the end of the channel. This results in an electrical current, called streaming current, and a potential difference between the two ends of the channel, called streaming potential. As a result, the streaming potential generates an electrical current, called conduction current, in the direction opposite to the fluid flow. This drives the fluid moving in the opposite direction of the external pressure. The final effect of EDL formed by the charged channel wall applies an electrical force on the fluid flow, reduces the velocity of the fluid flow, and increases the fluid drag. This phenomenon is known as the electroviscous effect [5]. A schematic of the electroviscous effect in a microchannel formed by two infinitely large parallel plates with negative charge is shown in Figure 1.

A one-dimensional microchannel formed by two parallel smooth plates with a separating distance of 2h, as shown in Figure 1, is studied. Here, the height of the microchannel is assumed to be much larger than the Debye length of the liquid, so the EDLs formed separately at the charged upper and bottom channel walls do not overlap with each other. In addition, the upper and bottom walls are assumed to be negatively charged and have the same zeta potential ζ. Because the channel wall is negatively charged, so the counter-ions, ions with positive charge (the symbol "+" in the figure) are attracted to the interface, and the co-ions, ions with negative charge (the symbol "−" in the figure) are repelled from the interface. The fluid flow is assumed to be 1:1 symmetric electrolyte in the laminar state, and only the fully developed flow is studied. Figure 1 also shows the coordinate system used in the modeling.

Under the above assumptions, the governing equations used to describe the electrical potential and ion distribution in the non-overlapping EDL are given as

where φ is the electrical potential, y is the coordinate axis, n+ and n− represent the ionic concentration of counter-ions and co-ions, respectively.

For the non-overlapping EDL, the boundary conditions of electrical potential and ionic concentration are given by

where Φ is the dimensionless electrical potential, and

Equation 5 gives the analytical solution of the nonlinear Poisson–Boltzmann equation. It can be used to study the potential and ion distribution of the non-overlapping EDL with a large zeta potential.

where A is the Avogadro constant, D+ and D− are the diffusion constants of counter-ions and co-ions respectively, and R is the universal gas constant.

The flow field in the microchannel

The governing equation of the electroviscous effect is given by the following modified Navier–Stokes equation,

where μ is the dynamic viscosity of the electrolyte, v is the velocity of the fluid flow in the microchannel, dp/dx is the driving pressure gradient, ρe = ze(n+ − n−) is the local net charge density in the EDL, and Ex is the electrical field strength.

where b is the charge-dependent slip length.

The effect of surface charge on the slip length of the solid–liquid interface can be expressed as [32],

where b0 is the original slip length without the effect of surface charge, α is a numerical factor, d is the equilibrium distance of Lennard-Jones potential, and lB is the Bjerrum length. Because the zeta potential can be used to characterize the surface charge density, the Equation 10 can be transferred as

Then, the velocity field and the flow rate of the fluid flow in the microchannel can be expressed as

where, S is the cross-sectional area of the channel.

Here, the electrical field strength is given by the balance of streaming current and conduction current as [5,13],

After establishing the model of the effect of the non-overlapping EDL on the pressure-driven flow in the microchannel, some properties of the electrolyte and parameters are chosen to carry out the analysis. Here, deionized (DI) water is chosen as the electrolyte, and the diffusion constants of OH− and H+ are assumed to be the same. Table 1 shows the properties and parameters used in the analysis [23,34].

Effect of EDL on flow field

For the case of no-slip condition, the velocity field of the fluid flow is given by

When the zeta potential is large enough, a is close to (bh/μ)(dp/dx) because of the larger ionic concentration next to channel wall and the faster decay for the potential, which means

in Equation 14 approach zero. Thus, the retardation of surface charge-induced EDL on the flow and the enhancement of slip on the flow counteract each other.

In all, when the zeta potential is large enough, the electroviscous effect disappears for pressure-driven flow in a microchannel with a no-slip condition, and the retardation effect of EDL on the flow and the enhancement effect of slip on the flow counteract each other for the case of slip condition. The underlying mechanism of these phenomenon is the decreasing electrical field strength and decreasing electrical body force, which is determined by the excessive concentration of ions near the channel wall and the dramatically fast decay of electrical potential in the EDL relating to the large zeta potential.

In this paper, the nonlinear Poisson–Boltzmann equation is analytically solved to analyze the electrical potential and ion distribution in the non-overlapping EDL with a large zeta potential. Then, considering the effect of non-overlapping EDL on the electrical conductivity and slip length, the effect of non-overlapping EDL with large zeta potential up to several hundred millivolts on the pressure-driven flow is introduced into the Navier–Stokes equation to study the electroviscous effect in a one-dimensional microchannel with no-slip condition and charge-dependent slip condition at the channel walls. The results show that the existence of surface charge leads to the redistribution of ions in an electrolyte and results in an increase in the average electrical conductivity of the electrolyte. Further, the surface charge at the solid–liquid interface can increase the interaction between the liquid and solid, and then reduce the slip length. The surface charge-induced EDL reduces the velocity field of the pressure-driven flow and increases the fluid drag in the microchannel, however, when the zeta potential of the EDL is large enough, the electroviscous effect disappears in the microchannel with no-slip condition. Additionally, the retardation of EDL on the flow and the enhancement of slip on the flow counteract each other for the case of a slip condition. This is because the high net ionic concentration near the channel wall and the dramatically fast decay of electrical potential in the EDL caused by the large zeta potential lead to a narrowing layer dominating the electrical field strength, and then decrease electrical force applied on the fluid flow.

The first author gratefully acknowledges the financial support of the National Natural Science Foundation of China (No. 51505292).

Effect of magnetic field, heat generation and absorption on nanofluid flow over a nonlinear stretching sheet

© 2015 Jing and Bhushan; licensee Beilstein-Institut.
This is an Open Access article under the terms of the Creative Commons Attribution License (http://creativecommons.org/licenses/by/2.0), which permits unrestricted use, distribution, and reproduction in any medium, provided the original work is properly cited.
The license is subject to the Beilstein Journal of Nanotechnology terms and conditions: (http://www.beilstein-journals.org/bjnano) 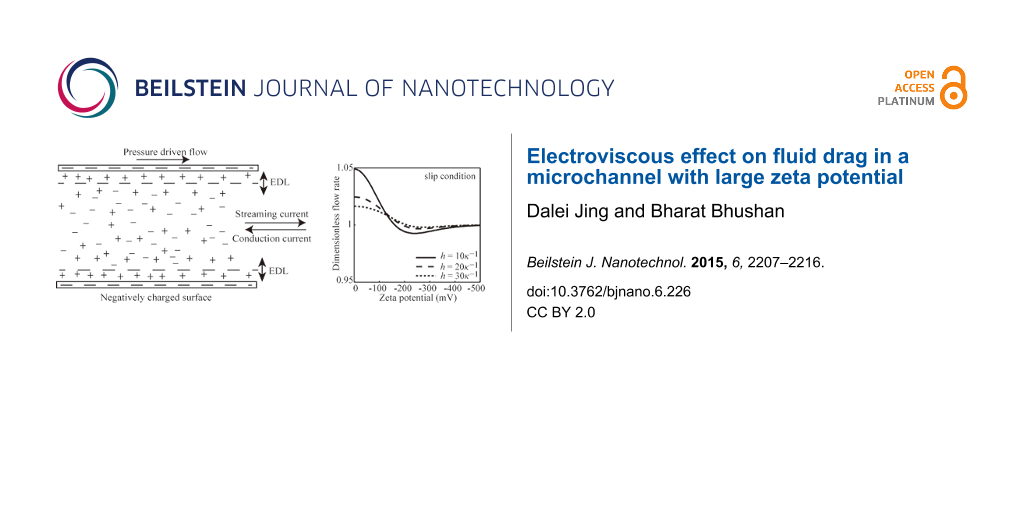