All articles from this author
Richard Wirth


All articles from this author
Chian-Hui Lai


All articles from this author
Guillermo Orts-Gil

Nanoparticles ranging in size from 1 to 100 nm are ideal tools to study biological processes [1,2]. Many different materials, including gold, have been used to create nanoparticles [3-6]. Gold nanoparticles are an attractive platform because of their biocompatibility, low toxicity, and low immunogenicity [7], their inherent optoelectronic properties [8] and high transmission electron microscopy (TEM) contrast. They are relatively easy to synthesize, functionalize, are biocompatible and have controllable optical properties [3,9-12]. Therefore, gold nanoparticles functionalized with carbohydrates [13], proteins [14], antibodies [15] and DNA [16] are commonly used as multivalent materials for biological studies. Gold nanoparticles have been used in vivo as radiotracers [15,17], for targeted delivery [18] and, when functionalized with carboxylic acids, inhibit β-amyloid fibril growth related to Alzheimer’s disease [19]. Gold nanoclusters (NCs) are gold nanoparticles ranging in size between 1 and 3 nm, with interesting physicochemical properties and increased surface area for drug delivery applications [20].

There are several methods to synthesize gold nanoparticles. In addition to the reduction of HAuCl4 with citrate at high temperatures [21], sodium borohydride can act as a reducing agent while an alkanethiol stabilizes the nanoparticles [22]. The latter method was used to prepare glyconanoparticles by adding thiol-terminated glycoconjugates [23]. Gold nanoparticles have also been prepared under reflux using 1-thioglucose as reducing and stabilizing agent [24] but the resulting nanoparticles are too unstable to be used as biosensors [25].

In an effort to create monodisperse, stable and surface-functionalized gold nanoclusters, we explored 1-thioglucose as a stabilizing and reducing agent. By serendipity we discovered a novel one-pot method to prepare gold nanoclusters using 1-thioglucose at room temperature. This simple and robust synthesis produces stable, and monodisperse nanoclusters. Oxidation of the carbohydrate results in carboxylic acid as determined by X-ray photoelectron spectroscopy (XPS). Coupling to the carboxylic acids or addition of thiols functionalizes the NCs that are taken up by cells but are less cytotoxic than NCs prepared by other methods.

During experiments exploring different methods for the synthesis of gold tetrapods [26], we found that simply the addition of 1-thioglucose as reducing agent to gold salts resulted in the formation of monodisperse gold NCs (Figure 1A). The reaction produced the same products at any temperature between 0 and 90 °C and thereby stood in stark contrast to all known literature procedures [27-29] that were sensitive to all reaction conditions including the speed of the stirrer. The influence of the gold to 1-thioglucose ratio on the yield and quality of the glucose-stabilized gold nanoclusters (Glc-NCs) was determined (Table S1, Supporting Information File 1). The nanoclusters aggregated within 5 h at very high ratios of gold ions to 1-thioglucose (Figure S1, Supporting Information File 1). At higher gold ion concentrations, NCs that are not fully coated with stabilizer aggregate. At high thioglucose concentrations, NCs do not form. Monodisperse gold NCs (2.02 ± 0.18 nm) were obtained as determined by high resolution TEM (Figure 1C,D) and dynamic light scattering (DLS) (Figure S4, Supporting Information File 1). The one-pot synthesis of Glc-NCs is independent on the temperature between 0 and 90 °C (Figure S5, Supporting Information File 1).

The Glc-NCs are more stable than nanoclusters that were stabilized with cetyltrimethylammonium bromide (CTAB-NCs) and tetrakis(hydroxymethyl)phosphonium chloride (THPC-NCs) as determined by UV absorbance. Gold nanoparticles smaller than 5 nm do not display a plasmon band. The Glc-NCs are stable and showed the same absorbance profile after three days of dialysis (Figure 1B). In contrast, the CTAB-NCs and the THPC-NCs exhibit plasmon bands (Figure S6, Supporting Information File 1). The CTAB-NCs showed a plasmon band directly after synthesis, which shifted to longer wavelengths after three days, suggesting an increasing rate of aggregation. TEM images of freshly prepared CTAB-NCs revealed polydisperse nanoclusters in terms of both size and shape (data not shown). The absorbance profile of THPC-NCs did not show a plasmon band after the synthesis. However, after three days, a plasmon band appeared, revealing particle aggregation. The surface charge did not change upon dialysis for any sample as indicated by the zeta potential (Figure S7, Supporting Information File 1).

Nanocluster cytotoxicity was assessed by incubating the nanoclusters for one day with the mouse cell line L929 for a proof-of-principle study. Cell viability was measured using the MTS [3-(4,5-dimethylthiazol-2-yl)-5-(3-carboxymethoxyphenyl)-2-(4-sulfophenyl)-2H-tetrazolium inner salt] assay [30]. The cytotoxicity of Glc-NCs, CTAB-NCs and THPC-NCs was compared. CTAB-NCs were toxic even at low concentrations (0.2–25 µM), whereas both THPC-NCs (Figure S13, Supporting Information File 1) and Glc-NCs did not show any toxicity at 500 µM (Figure 3A). To test whether the free stabilizers were affecting the cytotoxicity, both Glc-NCs and THPC-NCs were measured after synthesis without dialysis. Glc-NCs were not cytotoxic at any concentration tested (Figure 3B), whereas THPC-NCs were toxic at 100 µM (Figure S14, Supporting Information File 1), indicating that Glc-NCs are suitable for biological experiments even without purification.

Cellular uptake of the nanoclusters was studied by incubating 12.5 and 25 µM Glc-NCs with the same cell line. After 24 h, the cells were washed with buffer and then treated with aqua regia to transform the gold nuclei into gold ions that were detected by an inductively coupled plasma optical emission spectrometer (ICP-OES). The Glc-NCs are cell permeable as 108–109 gold atoms were delivered per cell and can potentially be used in cellular delivery applications (Figure 3C).

In summary, we developed a straightforward, robust and efficient one-pot method to prepare glucose-stabilized gold nanoclusters (Glc-NCs). The resulting 2 nm nanoclusters are monodisperse and more stable than gold nanoclusters synthesized by other methods. Functionalization of the Glc-NCs is achieved either via coupling to the carboxylic acid of the stabilizing agent or substitution with a thio-functionalized molecule. Glc-NCs are non-toxic, but are taken up by L929 cells. Surface functionalization of Glc-NCs with biomolecules opens opportunities for drug delivery applications.

We thank the Max Planck Society for generous funding. The authors would like to thank the group of Prof. Luisa De Cola for XPS measurements, Ms. Jeannette Steffen for ICP-OES assistance and Dr. Maria A. Carillo, Dr. Martina Delbianco, and Dr. Richard Fair for fruitful discussions.

The role of ligands in coinage-metal nanoparticles for electronics

© 2016 Varela-Aramburu et al.; licensee Beilstein-Institut.
This is an Open Access article under the terms of the Creative Commons Attribution License (http://creativecommons.org/licenses/by/4.0), which permits unrestricted use, distribution, and reproduction in any medium, provided the original work is properly cited.
The license is subject to the Beilstein Journal of Nanotechnology terms and conditions: (http://www.beilstein-journals.org/bjnano) 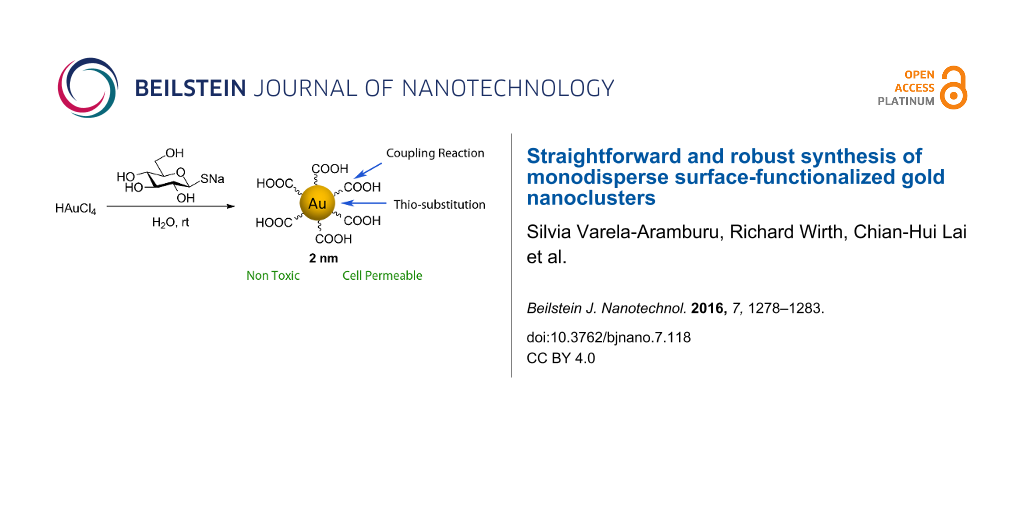