All articles from this author
Zengyuan Pang


All articles from this author
Hangyi Lu


All articles from this author
Yibing Cai


All articles from this author
Qufu Wei

This article is part of the Thematic Series "Nanostructures for sensors, electronics, energy and environment III".

With the development of modern industry, environmental pollution in the form of air pollution, water pollution and soil pollution has become ever more serious [1]. With regard to this, considerable attention has been paid to air pollution. Ammonia (NH3), as a highly toxic gas, can be emitted by natural and industrial sources and threaten human health [2-4]. NH3 at concentrations of 50 ppm may irritate the human respiratory system, skin and eyes [4]. Higher concentrations of NH3 will cause blindness, seizures, lung disease and even death [5-7]. So, there is an urgent need to develop a kind of gas sensor with high sensitivity and selectivity to detect NH3 at room temperature.

Metal oxide semiconductors can be applied as sensing materials for monitoring NH3. Ammonia sensors based on In2O3 [8], TiO2 [9], SnO2 [10], ZnO [11] and WO3 [12] have been reported. Indium oxide (In2O3) is an n-type semiconductor with a band gap of approximately 3.55–3.75 eV, which has been widely used due to its excellent electrical and optical properties. In2O3 also exhibits sensitivity to various vapors and gases, such as NO2 [13], CO [14], H2 [15], acetone [16] and formaldehyde [17]. However, for most metal oxides, there is the drawback of a required high operation temperature, about 300 °C, which will increase the energy consumption [18]. Compared with metal oxides, sensors based on conducting polymers show low power consumption and can be operated at room temperature. In addition, they exhibit a large specific area, small size and low weight, and they are easy to integrate with existing electronics [19,20]. Because of the environmental stability, easy synthesis and reversible doping behavior, polyaniline (PANI), as one of the most commonly used conducting polymers has received considerable attention. However, the sensitivity of PANI remains to be improved [21,22]. To conquer the limitations mentioned above, the combination of metal oxide and conducting polymers have been developed as an effective way to achieve enhanced performance [21,23-27].

In this paper, In2O3/PANI composite nanofibers were prepared by the combination of electrospinning technique, calcination method and in situ polymerization. This study presents the improved response capabilities of gas sensors based on In2O3/PANI composite nanofibers, which were synthesized with different ratios between In2O3 and aniline during the in situ polymerization. All sensors were tested at room temperature in a concentration range of NH3 from 100 to 1000 ppm.

The In(NO3)3/PVP composite nanofibers were fabricated via single-nozzle electrospinning. In(NO3)3·4.5H2O (1.059 g) and PVP (3.529 g) were added into 10 mL ethyl alcohol and 10 mL DMF. The mixture was stirred at 65 °C until all the solutes were fully dissolved. The precursor solution was poured into the syringe for electrospinning. The parameters of the electrospinning were: a needle-to-collector distance of 16 cm, a voltage of 16 kV, and a feed rate of 0.5 mL/h. Then the In2O3 nanofibers were synthesized by annealing the precursor composite nanofibers at 800 °C for 3 h after heating from room temperature at a rate of 0.5 °C/min.

Firstly, 0.1 g In2O3 nanofibers, which had been ground in an agate mortar, were added into 200 mL 1.2 mol/L HCl solution with ultrasonication treatment. Then a certain amount of aniline in HCl solution was added to the above suspension. After that, 30 mL 1.2 mol/L HCl solution containing APS was slowly dripped into the suspension to initiate the polymerization. The mass ratios of In2O3 nanofibers to aniline were 1:1, 1:2 and 1:4. The molar ratio of aniline to APS was 1:1. The in situ polymerization of aniline was carried out in an ice bath at 0–5 °C. The reaction lasted for 5 h. The suspension was taken out and left for 30 min, and then washed with deionized water and centrifuged for 5 min. At last, the composite nanofibers were filtered and dried in vacuum at 50 °C for 48 h. The schematic of the preparation of In2O3/PANI composite nanofibers is illustrated in Figure 1.

The gas sensing performance of the prepared In2O3/PANI nanofibers was measured using a custom-built static state gas sensing test system at room temperature (25 ± 1 °C) with a relative humidity of 60 ± 1%. During the gas measurement, the aqueous ammonia was injected into the test chamber using a syringe through a rubber plug. The volume of ammonia injected into chamber were 1.3468 μL, 4.0404 μL, 6.734 μL, 10.7744 μL and 13.468 μL resulting in ammonia vapor with concentrations of 100, 300, 500, 800 and 1000 ppm, respectively. The gas response value (S) is defined as a ratio of (Ri − R0)/R0, in which Ri and R0 are the resistance of the sensor in testing gas and air, respectively. Each result was the average value of five tests.

The XRD patterns of the nanofibers obtained by annealing In(NO3)3/PVP composite nanofibers at 800 °C are shown in Figure 2a. It can be seen that the crystal phase of the material was In2O3, and the diffraction peak of 30.56° was indexed to the (222) crystal plane of the cubic structure of In2O3. This result confirmed that the final product of calcination was In2O3.

Figure 2d presents the FTIR spectra of In2O3, PANI and In2O3/PANI nanofibers. The characteristic peaks around 1558 cm−1 originating from C=C stretching vibration in the quinoid ring of PANI can be seen. The characteristic bands of 1300 cm−1 and 1116 cm−1 were attributed to the C–N stretching vibration in the benzenoid ring and the bending vibration plane of C–H bonds in the quinoid ring, respectively. By comparison, the characteristic peaks of In2O3 also exist in the spectrum of In2O3/PANI nanofibers. This demonstrated that PANI was coated on the surface of the In2O3 nanofibers by in situ polymerization. But for In2O3/PANI-3 nanofibers, the peaks of In2O3 and PANI showed a significantly decrease which may be caused by the excess of PANI covering.

Current–voltage (I–V) measurements of PANI, In2O3/PANI-1, In2O3/PANI-2 and In2O3/PANI-3 nanofibers were carried out at room temperature. As shown in Figure 4, the I–V characteristics of all In2O3/PANI nanofibers clearly exhibit a nonlinear behavior and it can be observed the rectifying behavior in Figure 4, which might result from the p–n junction between the p-type PANI and n-type In2O3 [28,29]. It can be observed that the current of In2O3/PANI showed exponential rise at low voltage and then almost linear rise at high voltages. But for pure PANI, the current showed nearly linear behavior in the forward region, which is attributed to raidply forming polarons and bipolarons in PANI. As some researches mentioned [28-30], the ohmic behavior in this case was related to the formation of an ohmic contact between PANI and In2O3. Compared with pure PANI, the In2O3/PANI nanofibers reach a higher current due to the smaller width of the depletion layer between PANI and In2O3. Moreover, the addition of PANI reduced the width of the depletion layer at the interface and was helpful to form a typical ohmic system [31]. Thus, it can be confirmed that a p–n junction between PANI and In2O3 had been formed.

To study the ammonia sensing behavior of the sensors with different ratios of In2O3 to aniline, the dynamic response of the sensors based on pure PANI and In2O3/PANI nanofibers towards different NH3 concentrations ranging from 100 to 1000 ppm at room temperature were investigated. As exhibited in Figure 5, it can be seen that the trends of the response and recovery were consistent among the pure PANI and the three In2O3/PANI nanofibers sensors. The In2O3/PANI-1 and In2O3/PANI-2 nanofibers always show a higher response value than pure PANI at the same concentration of NH3.

It is well known that the chemical sensors are composed of two parts, an active part and a transduction part, whose function is sensitive to gas analytes and produces a signal that is related to the concentration [19]. In this study, PANI acted as an active element which can react with NH3 resulting in the transformation of PANI from emeraldine salt to emeraldine base by dedoping. The reaction between PANI and NH3 can be described as follows:

The absorption of NH3 caused the deprotonation of the N–H+ site of the emeraldine salt, leading to a significantly increased resistance [37,38]. When this reaction reached equilibrium in NH3 atmosphere, the resistance of the PANI-based sensor maintained a constant value. When the sensor was exposed to air, NH3 is volatilized and the resistance of the PANI composite nanofibers is reduced. Therefore, due to the unique mechanism, PANI (emeraldine salt) based sensors exhibited a great selectivity to NH3.

As the I–V characteristics show, it is confirmed that p–n heterojunctions had been formed between PANI and In2O3 nanofibers, in which PANI is a p-type semiconductor and In2O3 nanofibers presents as an n-type semiconductor [21,27,34]. The changes of the depletion layer of the p–n heterojuction are shown in Figure 10. The width of the depletion section is related to the doping concentration [39]. With low concentration doping, it needs a sufficiently thick depletion layer to provide impurity atoms to build an internal field. Accordingly, on exposure to NH3, the protons from PANI are transferred to the NH3 molecules, which results in a widening of the depletion layer in the PANI section [40]. Simultaneously, the variation of the PANI region width would have effects on the width of the In2O3 region and on the p–n junction. The electrons of In2O3 and holes of PANI move in opposite directions until the new Fermi level (EF-NH3) reaches equilibrium. In this process, the electron transfer between the n-type In2O3 and p-type PANI is obstructed due to the potential barrier. Thus the depletion layer between PANI and In2O3 becomes wider and the resistance of the material increases [27,41,42]. According to the response definition (S = (Ri − R0)/R0), the increase in resistance attributed to the p–n junction increases the sensitivity of composite nanofibers sensors. In addition, the sensitivity of the composite gas sensor materials is also connected to the mass ratio of In2O3 and aniline.

Because of the smaller amount of polyaniline, which acts as active material in this composite system, the In2O3/PANI-1 gas sensor showed a lower sensitivity. However, for the In2O3/PANI-3 gas sensor, the external surface of In2O3 nanofibers was coated with excess polyaniline, yielding a gas sensing perfomance similar to that of pure PANI. Even the response of In2O3/PANI-3 to 100 ppm and 500 ppm NH3 was less than that of pure PANI. The p–n junction of In2O3 and PANI in In2O3/PANI-3 does not work efficiently. In general, the characteristic of the gas sensitive material response was discrete instead of ideally linear [34,36,43]. For In2O3/PANI-3 and pure PANI, the characteristic responses were similar. Therefore, it was possible that the response of In2O3/PANI-3 were less than that of pure PANI, especially towards lower concentrations of NH3. In this study, when the mass ratio of In2O3 to aniline was 1:2, the gas sensor material exhibited optimum performance in detecting NH3.

In2O3/PANI nanofibers with reliable sensing properties towards NH3 were synthesized by electrospinning, calcination and in situ polymerization. The gas sensors based on In2O3/PANI nanofibers exhibited a higher sensitivity than pure PANI. The In2O3/PANI-2 nanofiber sensor exhibited the best sensitivity to NH3 vapor at room temperature, and this sensor was further investigated for its selectivity by interfering with methanol, ethanol and acetone vapors. The results indicated that the In2O3/PANI-2 nanofiber sensor had excellent selectivity, good repeatability and reversibility. The enhancement of gas sensing performance of In2O3/PANI nanofiber sensor may be attributed to formation of a p–n junction between In2O3 and PANI, which existence is confirmed by the I–V characteristics.

© 2016 Nie et al.; licensee Beilstein-Institut.
This is an Open Access article under the terms of the Creative Commons Attribution License (http://creativecommons.org/licenses/by/4.0), which permits unrestricted use, distribution, and reproduction in any medium, provided the original work is properly cited.
The license is subject to the Beilstein Journal of Nanotechnology terms and conditions: (http://www.beilstein-journals.org/bjnano) 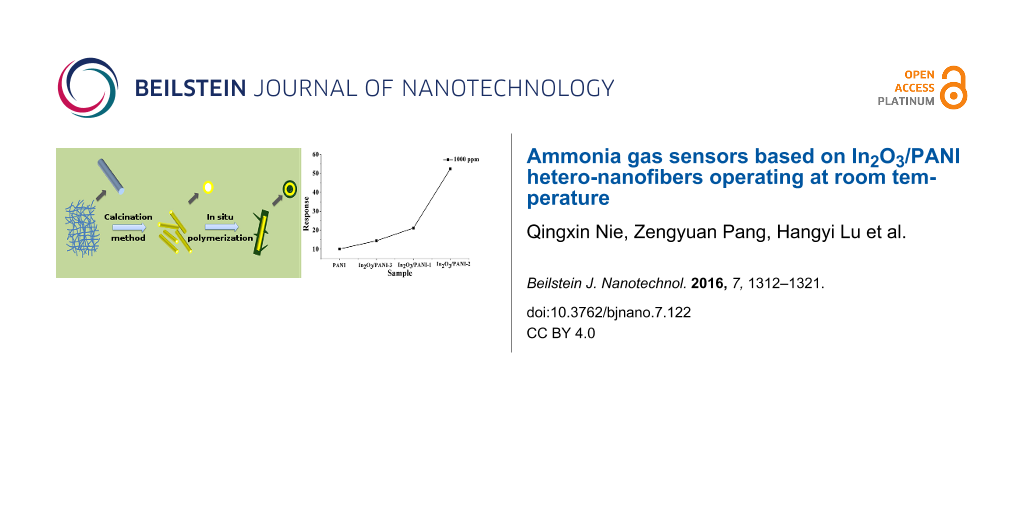