All articles from this author
Raimonds Meija


All articles from this author
Alexander I. Livshits


All articles from this author
Juris Prikulis


All articles from this author
Subhajit Biswas


All articles from this author
Justin D. Holmes


All articles from this author
Donats Erts

In this study we address the mechanical properties of Sb2S3 nanowires and determine their Young’s modulus using in situ electric-field-induced mechanical resonance and static bending tests on individual Sb2S3 nanowires with cross-sectional areas ranging from 1.1·104 nm2 to 7.8·104 nm2. Mutually orthogonal resonances are observed and their origin explained by asymmetric cross section of nanowires. The results obtained from the two methods are consistent and show that nanowires exhibit Young’s moduli comparable to the value for macroscopic material. An increasing trend of measured values of Young’s modulus is observed for smaller thickness samples.

Antimony sulfide or stibnite is a highly anisotropic semiconductor material with potential applications in thermoelectric and optoelectronic [1,2] devices due to its high achievable thermoelectric power and photosensitivity [3], its large absorption coefficient [4,5] and direct band gap in the visible and near infrared range (1.78–2.5 eV) [6-8]. Owing to these properties, Sb2S3 has also been considered as an attractive material for microwave frequency [9], optical recording [10] and photovoltaic [2,11] applications. It has also been studied as a photonic bandgap material in the visible region of the electromagnetic spectrum [12].

Synthesis and characterization of various Sb2S3 nanostructures including dendrites [13], nanorods [14], whiskers [15], nanowires (NWs) [16,17] and nanotubes [18] have been reported. Particular emphasis has been placed on the investigation of structural and optical properties of Sb2S3 thin films [19,20]. Recently, piezoelectricity and ferroelectricity has been demonstrated in individual single-crystalline Sb2S3 NWs embedded in anodic aluminum oxide (AAO) templates [17]. However, published measurements of the mechanical properties of Sb2S3 nanostructures are very scarce. To our knowledge there are no reports about experimental investigation of mechanical properties of individual Sb2S3 cantilevered nanostructures and their Young’s modulus in particular.

Understanding the elastic behavior of nanostructures is not only important for the development of potential applications, but also allows for an overall estimation of the NW structure obtained using different synthesis methods. Various approaches have been used to study the mechanical behavior of NWs including AFM 3-point bending test [21,22] and nanoindentation [23]. In situ techniques stand out among other methods for mechanical characterization due to their capability of real-time monitoring of the elastic response of the NWs. Bending tests with a use of external force sensor [24], tensile deformation [25,26] as well as mechanical [27,28] and thermal [29] resonance have all been successfully used to determine the mechanical properties. These techniques allow for the measurement of elastic parameters such as hardness and Young’s modulus, as well as for the investigation of the plasticity of individual NWs [30].

It is therefore of great interest to find out to what extent the observed discrepancies are intrinsic to the examined NWs and how to account for the differences in the measurement methods. Substantial uncertainties in mechanical tests may arise from variations in boundary conditions and several methods have been proposed to resolve this issue [33,34]. Moreover, inhomogeneous cross section, amorphous outer layer and curvature of the NW may result in additional errors. Bending methods using the AFM may suffer from slippage of the AFM tip over NW and the effects arising from the induced force in axial direction in case of double clamped NWs [21,22]. For in situ tensile testing precise alignment of the NW is a crucial factor and the method involves laborious preparation of the specimen. Electrically induced mechanical resonance is a facile method that offers relatively fast characterization of the NW but caution has to be taken when determining the true resonance frequency as other factors such as inhomogeneous mass distribution may be responsible for unwanted resonant excitation.

In the present study we report measurements of Young’s modulus of free standing Sb2S3 NWs. Our experiments were comprised of two different methods of mechanical investigation of the NWs inside the chamber of a scanning electron microscope (SEM). One method was the electric-field-induced mechanical resonance, while the other involved static bending of Sb2S3 NWs with atomic force microscope (AFM) tip inside SEM. The choice of the methods for this study allowed for subsequent characterization of the same NW without changing other experimental conditions (e.g., clamping) than alignment of the external force. The obtained mean value was then compared to that of bulk material [35].

The examined Sb2S3 NWs were synthesized inside cylindrical pores of anodic aluminum oxide template (AAO) by a solvent-less technique. The as-synthesized NWs were single-crystalline and showed orientation along c-axis as revealed by high resolution transmission electron micrograph images and selected area electron diffraction pattern analysis [17]. A detailed description of NW synthesis can be found in [17]. Sb2S3 NW powder was obtained by mechanically removing outgrown NWs from the surface of the AAO template. Alternatively NWs from dissolved AAO templates were also used for mechanical testing. In this case filled AAO templates with NW diameters ranging from 80 to 200 nm were polished, dissolved in 9% H3PO4, washed and dried.

The as-prepared Sb2S3 NW powder was used to glue NWs to an Au probe with conductive epoxy CW2400 to obtain free-standing single-clamped NW specimens. A SmarAct 13D nanomanipulation system with an additional vacuum-compatible micro stepper-motor (Faulhaber ADM0620) was staged into a field emission scanning electron microscope (SEM Hitachi S4800) for resonance and static bending experiments. The micro stepper-motor was used for rotation of the specimen for exact determination of NW cross-sectional dimensions and for precise positioning of the NW-countering tip system. For mechanical resonance measurements, an AC signal generator (Agilent N9310A) and a DC voltage source (Keithley 6430) were connected to probes mounted on nanomanipulation system. A frequency tunable AC voltage provided by a signal generator was applied across the NW and the countering Au tip. At excitations near the natural resonance frequency of the NW, mechanical oscillation of the NW can be easily monitored directly in SEM images. For static bending experiments, soft silicon nitride AFM cantilevers with spring constants of 0.002–0.02 N/m (Olympus BL-RC-150VB) were used. The spring constant of the cantilever was calibrated in AFM (Asylum Research MFP-3D BIO) using the thermal noise method [36].

Figure 1a,b shows SEM images of Sb2S3 nanowires with a length of 10 μm and a radius of 67 nm with applied AC voltage at two different frequencies, where one is far from the resonance and second matches resonant excitation. The force acting on the NW is proportional to the electric field squared [37], thus both cos(ωt) and cos(2ωt) components can be observed. Depending on which term dominates the resonance, the driving frequency, ω, either equals the fundamental resonance frequency of the NW or corresponds to one half of the NW resonance frequency. Therefore oscillations at one half and at double the resonance frequency were examined for each NW to ensure that the true resonance frequency has been found.

Quality factors, Q, were determined for each NW by measuring oscillation amplitude versus frequency. In Figure 1c, an amplitude–frequency curve is plotted for a typical single-clamped Sb2S3 NW with Q = 418. Damping ratios in resonance experiments for all NWs were in the range of 0.001–0.003, hence their contribution to the observed resonance frequencies and consequently calculated Young’s modulus values was negligible.

To assess the accuracy of the obtained results and exclude possible errors associated with the applied resonance method, alternative mechanical testing was done by determining the Young’s modulus using static bending for some of the NWs that were examined by resonance method. During in situ bending test NW was pushed against the tip of the cantilever. The applied load direction was adjusted perpendicular to the vertical axis of the NW. Two SEM images were recorded for each nanowire during the bending, namely one under bending load and the other one in a relaxed state. By overlapping the two images both the displacement of the AFM tip, ∆x, and the angle of rotation, θb, at the loading point of the NW were measured, which allowed for the calculation of the NW bending force, F. The schematics of the bending experiment and a typical SEM image recorded during the manipulation are shown in Figure 4a and Figure 4b–c, respectively. The NW was oriented perpendicular to the direction of the electron beam as it is essential to ensure that the real displacement is measured, instead of a projection at an unknown angle.

The inset in Figure 3 shows a comparison between results obtained by resonance and static bending methods for five of the examined NWs. It can be seen that both methods give similar results. The discrepancies between the obtained results could be assigned to errors in measuring displacement and length of the NWs. By solving Eresonance(L) = Ebending(L) for L, the calculated value was compared with experimentally obtained results, giving a mean relative error of 31%. Measurement errors due to cantilever spring constant calibration were taken into account.

Figure 3 suggests that a size effect exists for the investigated NWs over the examined cross sectional area range, with the apparent stiffness increasing for NWs with smaller cross sectional area. A linear fit added to the data points marks the tendency with a negative slope of ΔE/ΔA ≈ 230 GPa/μm². This can be explained by a nanoscale surface effect that arises from surface atoms being in a different environment than the bulk. An increasing surface-to-volume ratio may lead to the observed stiffening trend that has been described using a number of mechanisms such as surface reconstruction [28], surface bond saturation [41] and bulk nonlinear elasticity [42]. Additionally, the variation of the surface-to-volume ratio among the NWs with different shapes could contribute to the experimentally obtained scatter. It is also important to note that different loading methods may give rise to different elastic response of NWs. In this study we are dealing with similar mechanical loading where one side of the NW is being under compression while the other is under tension, which agrees well with the consistent results between the methods.

We have experimentally obtained Young’s modulus of individual Sb2S3 NWs combining two different techniques, namely mechanical resonance and static bending. The results show that the investigated NWs have Young’s moduli close to that of bulk Sb2S3, which depend on the size over the examined range of the NW cross-sectional area. The scatter of the obtained values could be attributed to errors in measured geometrical parameters and different cross sectional geometries of the NWs, imperfectly defined boundary conditions and sliding at the NW–tip contact point in bending experiments.

The study has been supported by the Latvian Council of Science, project No 549/201.

© 2016 Jasulaneca et al; licensee Beilstein-Institut.
This is an Open Access article under the terms of the Creative Commons Attribution License (http://creativecommons.org/licenses/by/2.0), which permits unrestricted use, distribution, and reproduction in any medium, provided the original work is properly cited.
The license is subject to the Beilstein Journal of Nanotechnology terms and conditions: (http://www.beilstein-journals.org/bjnano) 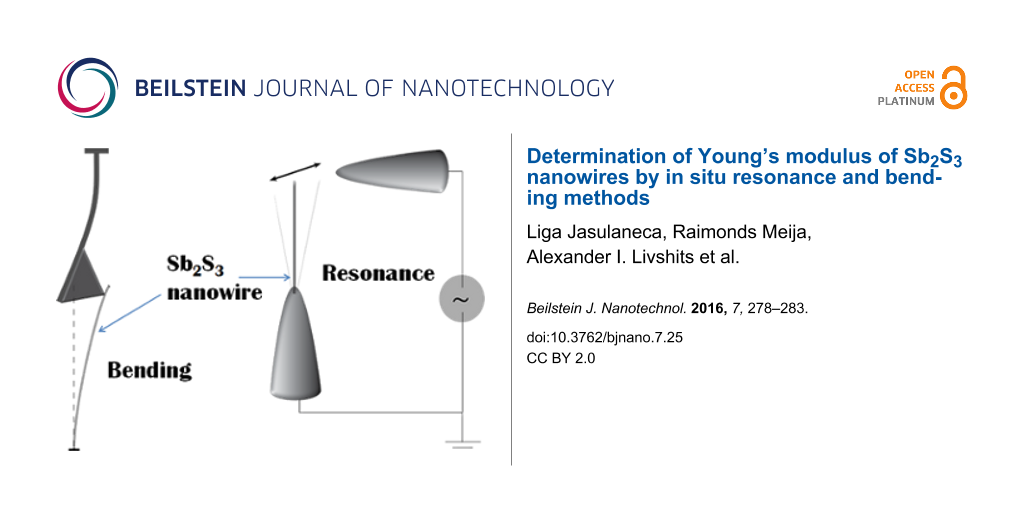