All articles from this author
Sebastian Weber


All articles from this author
C. Peter Bengtson


All articles from this author
Hilmar Bading


All articles from this author
Joachim P. Spatz


All articles from this author
Amin Rustom

The formation process of nanoelectrode interfaces (NEIs) was based on track-etch template synthesis as schematically shown in Figure 1a. First, monocrystalline gold (Au) nanowires in parallel arrangement featuring homogenous, low defect and parallel-oriented crystal planes were produced by electrodeposition as previously described [1]. This process employed polycarbonate (PC), track-etched filter membranes with a pore density of 1 × 106 pores/cm2 and a pore size of 100 nm (Figure 1a, 1–4). Aluminium (Al) contacts were attached to the surface with a conductive silver lacquer. An isolating, PC layer was applied by spin coating at 1500 rpm (Figure 1a, 5). Finally, the surfaces were etched with 2 N NaOH for 12 min at 70 °C in order to selectively expose the electrode tips (Figure 1a, 6).

Scanning electron microscopy (SEM) analysis of the final NEI surface (Figure 1b, 1) shows the deposited circular area of 1.57 cm2 on the glass coverslip covered with 1 × 106 electrodes/cm2 with an average length of 2 ± 0.3 µm and diameter of 102 ± 12 nm (Figure 1b, 2). The laid open electrode tips can be highlighted by use of an in-lens SEM detector enhancing material contrast (Figure 1b, 3) and accessibility of the gold surface demonstrated by specific labelling with a biotin and AlexaFluor 488 labelled streptavidin, resulting in punctured fluorescence signals at the expected density (Figure 1b, 3, inset). By use of a profilometer (see Supporting Information File 1, Experimental) and comparing the length of isolated and nonisolated electrodes in SEM cross sections the thickness of the PC layer was determined to be 405 ± 5 nm (Figure 1b, 4). All surface parameters had to be thoroughly tuned in order to achieve a balance between penetration ability, isolation properties and cell survival on one hand, and mechanical stability on the other.

To demonstrate the ability of our NEIs to mediate functional access to the interior of living cells, we fused them with macroplasmodia of the slime mold Physarum polycephalum (Figure 2). This developmental stage represents an individual multinucleated cell confined by one continuous plasma membrane, featuring complex membrane potential oscillations [2] correlated with problem solving strategies [3,4] and electrochemical reactions to varying environmental conditions, including light [5] and humidity [6]. Along with its robustness and ease of cultivation (see Supporting Information File 1), these properties make Physarum p. an ideal model organism for various bioinspired technologies. To plate the slime mold onto NEIs, approximately 400 µL of a Physarum p. confluent advancing front was scraped with a spatula from a 2–3 day-old macroplasmodium and placed upside down onto a planar gold electrode (PGE) mounted on a nonconductive holding platform (Figure 2a,b). As Physarum p. exhibits rapid membrane regeneration after rupture, this macroplasmodial mass was allowed to recover for 1–2 min before mounting the NEI on top of the assembly. For additional pressure, a 5 g weight was placed on the setup (Figure 2b, FG) to enforce membrane penetration and overcome the low proportion and stochastic nature of nanoelectrode penetration observed for mammalian CHO cells using hollow alumina nanostraws [7]. The electrodes were short-circuited before each measurement to prevent further artefacts, such as remaining surface charges. Voltage measurements were performed using an oscilloscope-based setup with an input resistance of 1 MΩ to simulate an electrical load on the circuit (see Supporting Information File 1).

The measurements from Physarum p. sandwiched between a PGE and an NEI resulted in two distinctive states. In a first set of experiments, a mean voltage of −40 ± 6 mV was detected (Figure 2c, red), corresponding to published estimates of membrane potential of Physarum p. plasmodia, ranging from −20 to −100 mV [8,9]. This was also in line with our comparative measurements performed by conventional single glass pipette-based electrophysiology (see Supporting Information File 1), which detected −35 ± 12 mV (Supporting Information File 1, Figure S1a). Noteworthy, the potential measured with our NEI/PGE system was stable in most cases for the complete observation period, which lasted several days and sometimes up to one week (Supporting Information File 1, Figure S1b). In a few cases, the potential dropped more or less slowly, most likely reflecting successive ejection of nanoelectrodes from the cytoplasm or, at later time points, nutrient shortage. This view is corroborated by our own (Supporting Information File 1, Figure S1a) as well as other various electrophysiology studies, observing rapid ejection of intracellular glass microelectrodes from Physarum p. [10]. This is presumably due to its pronounced membrane regenerative ability. In line with this notion, the observed voltage drop was accelerated when NEI measurements were performed without additional pressure applied to the electrode (Supporting Information File 1, Figure S1c). Considering the input resistance of the system, −40 mV corresponds to a hypothetical electrical output of approximately 1.6 nW. To determine the maximal electrical output of this Physarum/NEI/PGE “battery”, measurements using defined resistors were performed. This experiment revealed a peak of 3.31 nW at 4 MΩ (Figure 2d), emphasizing its potential use for energy harvesting applications.

In the second set of experiments, a mean voltage of +20 ± 8 mV was detectable (Figure 2c, green). This is interpreted as NEIs not being able to penetrate the plasma membrane, resulting in an “extracellular” configuration. An explanation for the volatile penetration ability could be minor alterations of NEI surface quality based on the manual production process and/or variances of the slime mold constitution (e.g., the thickness of the slime layer). This combination of nanostructural and biological variability is difficult to control due to the complexity of the experimental setup. Indeed, several cell/NW-related papers based on experimental and theoretical considerations including mathematical and mechanical models predict a narrow window for the aspect ratio and density of electrodes as well as for factors such as cell stiffness, cell spreading, substrate adhesion or cell traction forces in order to ensure efficient membrane penetration [11,12]. Extracellular control measurements performed with PGE/PGE instead of NEI/PGE configurations revealed a stable voltage of only −0.5 ± 2 mV (Figure 2c, blue).

Interestingly, during “extracellular” NEI measurements, sinusoidal potential changes frequently became detectable (Figure 3, green). These are well understood for Physarum p. and closely related to its oscillating cytoplasmic shuttle streaming that develops over a similar time frame [2]. When compared to PGE/PGE recordings, the significant enhancement of the signal-to-noise ratio is likely due to an increased electrical coupling coefficient based on the “close” contact between the sharp, monocrystalline electrode tips and the plasma membrane in combination with the PC isolation layer increasing the seal resistance. Comparable improvements of the signal-to-noise ratio were achieved with several nano- or microstructured electrode surfaces, such as chemically functionalized micrometer-sized mushroom-shaped gold protrusions [13,14], highlighting the general advantages of such surfaces over planar electrodes. The signal-to-noise ratio of intracellular NEI measurements (Figure 3, red) was even better, presumably due to their direct, low impedance access to the cell interior, proving the suitability of the system for electrophysiological recordings and biosensor applications. The fact that under these conditions the periodic potential changes were only rarely observed (and if so, at later time points) could mean that the artificial electrical access has significant impact on the underlying electrochemical machinery. This finding may be used in the future to specifically modulate cellular behavior by input of defined electrical signals.

The successful demonstration of stable electrical access to the membrane potential of cells opens the door for various applications requiring direct or indirect access to the electrochemical machinery of biological structures. To demonstrate the capabilities of our NEI technology in view of typical sensor applications, we used the Physarum/NEI preparation as an “autonomous” humidity sensor, employing the cell’s intrinsic capability to respond to environmental humidity changes [6]. Physarum/NEI sandwiches were prepared as described and the potential was recorded over time (Figure 4) while the humidity inside the experimental chamber was varied using a custom-built ventilation system (see Supporting Information File 1). An abrupt reduction in humidity resulted in a biphasic electrical response, consisting of a rapid hyperpolarization in the range of −1 mV followed by a slower depolarization of approximately +1.5 mV (Figure 4, red). Noteworthy, the amplitude of this response was dependent on the strength of the humidity reduction, proven by experiments employing different humidity levels (Supporting Information File 1, Figure S1d).

In contrast, extracellular measurements employing PGEs showed a delayed, monophasic deflection in the range of only +0.2 mV (Figure 4, blue). “Extracellular”, NEI-based measurements showed the same monophasic progression but with a larger amplitude in the range of +1 mV (Figure 4, green). Although the cellular mechanisms behind hygrosensing of Physarum p. are largely unknown (as is true for hygroreceptors from various insects [15,16]), our observations demonstrate that even complex cell functions may be technologically implemented by an appropriate interface and interpretation of their characteristic signal patterns. The remarkable delay in the appearance of the monophasic electrical response due to humidity changes in our “extracellular” measurements was most likely related to the lack of a hyperpolarization phase. This effect may relate to the participation of intracellular Ca2+ stores, as previously suggested with regard to ATP/P2x purinergic receptor-induced potential changes [17].

In summary, we have demonstrated functional access to the electrochemical machinery of a eukaryotic cell system that may open the door to innovative sensor and energy harvesting applications. By employing a cell’s intrinsic signal processing and amplifying strategies, based on receptors, ion channels and signaling cascades, future applications of these technologies may attain molecular precision and/or improved energy conversion efficiency. Furthermore, since NEI analysis is not limited to single or small numbers of cells, it also allows for electrophysiological measurements and potential recordings from complete cell layers. This could compensate for individual variation and serve to amplify weak electric output for improved detection of functions such as intercellular communication.

We would like to thank It4ip Belgium for providing us with track-etched PC filter membranes with custom parameters, Sigrid Riese for cell culture and experimental support, Andrea Hellwig for support with SEM and TEM measurements, and Günther Meinusch for help with electronics. This study was supported by the Max-Planck Society and the Baden-Württemberg Stiftung (“Funktionelle Nanostrukturen IV”).

Fate and transformation of silver nanoparticles in different biological conditions

The nanomorphology of cell surfaces of adhered osteoblasts

© 2016 Staufer et al; licensee Beilstein-Institut.
This is an Open Access article under the terms of the Creative Commons Attribution License (http://creativecommons.org/licenses/by/2.0), which permits unrestricted use, distribution, and reproduction in any medium, provided the original work is properly cited.
The license is subject to the Beilstein Journal of Nanotechnology terms and conditions: (http://www.beilstein-journals.org/bjnano) 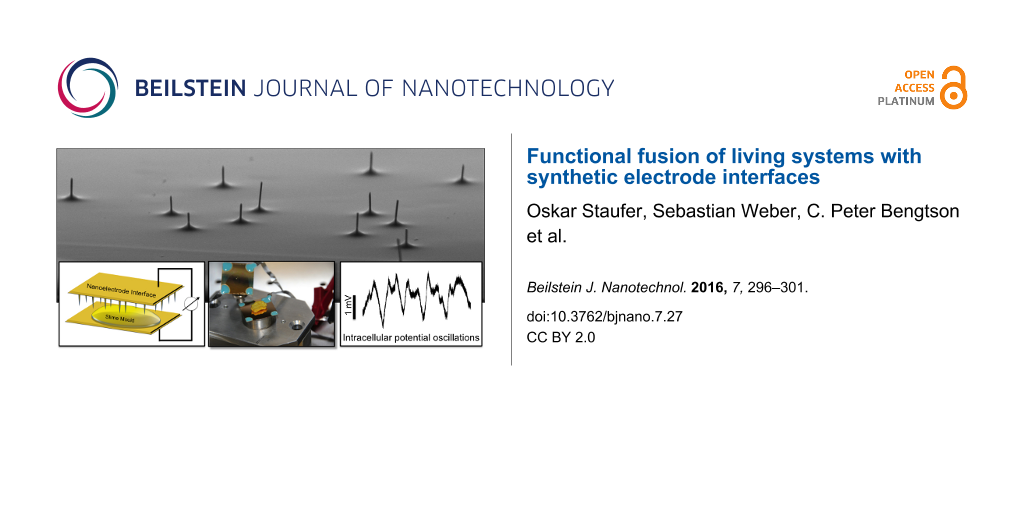