All articles from this author
Yasuhiro Matsumoto


All articles from this author
Andrés M. Espinoza-Rivas


All articles from this author
Manuel A. Pérez-Guzmán


All articles from this author
Mauricio Ortega-López

This work describes the formation of reduced graphene oxide-coated copper oxide and copper nanoparticles (rGO-Cu2ONPs, rGO-CuNPs) on the surface of a copper foil supporting graphene oxide (GO) at annealing temperatures of 200–1000 °C, under an Ar atmosphere. These hybrid nanostructures were developed from bare copper oxide nanoparticles which grew at an annealing temperature of 80 °C under nitrogen flux. The predominant phase as well as the particle size and shape strongly depend on the process temperature. Characterization with transmission electron microscopy and scanning electron microscopy indicates that Cu or Cu2O nanoparticles take rGO sheets from the rGO network to form core–shell Cu–rGO or Cu2O–rGO nanostructures. It is noted that such ones increase in size from 5 to 800 nm as the annealing temperature increases in the 200–1000 °C range. At 1000 °C, Cu nanoparticles develop a highly faceted morphology, displaying arm-like carbon nanorods that originate from different facets of the copper crystal structure.

A special class of composites based on GO/inorganic nanoparticles is the one in which the inorganic nanoparticle is protected against degradation by coating with a suitable material (shell) [9,10]. Actually, silica, polymers and graphitic materials hold promise to produce highly stable well-protected metal or metal oxide nanoparticles [11]. In particular, rGO–Cu core–shell nanostructures have been synthesized by CVD [12,13], hydrothermal synthesis [14] and pyrolysis of an organocopper compound [15-17].

In a previous work, the authors reported the effective reduction of chemically exfoliated GO using a copper foil as the GO support. It was found that the final product consisted of rGO sheets decorated with Cu or Cu2O nanoparticles. To explain the presence of unoxidized Cu nanoparticles it was suggested that rGO sheets might coat Cu to prevent oxidation [18].

The present work reports further studies on the abovementioned Cu-based nanoparticles. Interestingly, they develop a highly faceted morphology and are actually coated with rGO sheets. The rGO-coated Cu-based nanoparticles developed at temperatures in the range of 200–1000 °C starting from bare Cu2O nanocrystals that formed at 80 °C. Their morphology and the inorganic predominant phase strongly depended on the annealing temperature.

Preparation of the rGO sheets and copper-based nanoparticles composite

As described in our earlier work [18], GO was prepared from natural graphite flakes by a modified Hummers method [19,20]. GO was dispersed in water (2 mg/mL) and then drop cast on a previously cleaned Cu foil (0.02 mm thick and 1 × 1 cm2) to form a thin film. Before the high temperature process, the sample was dried at 80 °C under nitrogen flux for 15 min.

The thermal process leading to the reduction of GO and the formation of Cu-based nanoparticles was carried out in an atmospheric pressure CVD apparatus equipped with a quartz tube. The annealing process was performed at 200, 400, 600, 800 and 1000 °C under an inert Ar atmosphere for 1 h. For characterization, the rGO films were peeled off with stainless steel tweezers.

We prepared a series of samples of GO supported on a Cu foil, as described in the Experimental section. FE-SEM images in Figure 1 show the surface morphology of the substrate copper foil (a) before and (b) after GO was deposited and dried at 80 °C. The bare Cu foil surface exhibits particles 7–8 nm in size and structural defects. The surface chemical composition determined by EDS revealed the existence of oxygen probably forming a native copper oxide layer (CuxO) and carbonaceous species as adsorbed impurities. The inset of Figure 1b shows a TEM image of nanoparticles grown at 80 °C.

After being detached and analyzed by TEM, it was seen that well-crystallized Cu2O nanoparticles developed during the annealing at 80 °C (inset in Figure 1b). In our previous work we assumed that they developed following a mechanism similar to that proposed by Glover and co-workers [21]. They demonstrated that Cu nanoparticles (CuNPs) can be formed on the surface of copper objects exposed to ambient humidity for a few minutes. We believe that during the drying process similar conditions to those proposed by Glover et al. could be established which lead to the formation of CuNPs, which oxidized further due to interaction with water vapor.

Figure 2 displays TEM images of samples prepared at 200–600 °C for 1 h. In this temperature range, the initial Cu2O phase preserves in the inorganic core of rGO-coated NPs. Figure 2b and insets in Figure 2c,d provide details about the interplanar distance of the carbon shell as well as the inorganic core, corroborating that they correspond to rGO and Cu2O, respectively.

It is noteworthy that Cu2ONPs were not observed when experiments were done using GO-free Cu foil substrates. Therefore, it is quite probably that the Cu-based NPs obtained at 200–1000 °C develop from the preformed copper oxide nanoparticles, which grew during the GO–copper foil sample preparation.

It was reported that the melting process of bulk materials involves a pre-melting stage in which the surface melts at temperatures lower than the bulk material melting point [22,23]. In fact, kinetics studies on metal melting revealed that the pre-melting temperature depends partly on the surface microstructure and partly on surface-adsorbed impurities [24]. It has also been reported that, for nanostructured materials, the melting point strongly depends on the size and it is lower than that of the bulk counterpart [25]. For instance, bulk Cu melts around 1084 °C [26], whereas 40 nm size CuNPs were found to melt at 190 °C, and the surface melting begins around 180 °C [27].

As shown in Figure 1a, the copper foil surface displays a fine-grained morphology probably comprising native CuxO grains and structural defects that could promote the melting on the Cu foil surface even at 200 °C. On this basis, we assumed that upon raising the temperature, the initial Cu2ONPs partially melt, then they interact with the GO network to be finally wrapped in GO sheets. The rGO-Cu2ONPs diffuse on the partially melted surface to agglomerate and coalesce and so to form bigger nanostructures. During coalescence, rGO catalytically decomposes producing carbon oxygenated species (epoxide, COOH, C–OH, CO2 and CO) and water vapor [28]. Once the nanoparticles attain a certain size, the rGO sheets rearrange at the nanoparticle surface to produce a hermetic rGO coating for Cu2O or CuNPs (Figure 3).

It is thought that, at 800–1000 °C, carbonaceous species produced during coalescence could establish carbon supersaturation conditions at the partially melted particle surface, and then to promote the formation of a well-closed conformal coating at the CuNP surface. This might explain the stability against oxidation observed in these particles.

In regarding to dominant phase, we propose that Cu2O reacts with gaseous carbonaceous species derived from the GO reduction process to become Cu, this depending on the amount of CO evolved during such a thermal process.

The carbothermal reduction of copper oxide has been studied by several authors, and the involved chemistry and pathway toward the copper oxide reduction appear to be very complex processes [29-31]. Experiments on the reduction of CuO by CO carried out by X. Wang et al. [29] revealed that CuO decomposes either directly to metallic copper when high amounts of CO were supplied or via formation of Cu2O when CO supply was limited.

Because the detachment of the oxidative species from the GO plane is a temperature-activated process, we suggest that, in the interval from 200 to 600 °C, CO does not evolve in sufficient amounts to completely reduce the existent copper oxide phase. The resultant nanoparticles increase in size preserving the original phase. In the same view, in the high-temperature range (800–1000 °C), copper oxide was totally converted to copper via reduction by CO.

After being rGO-coated, the NPs attain their equilibrium size and shape depending on the undercooling temperature. Figure 4 displays TEM and HR-TEM images of samples prepared at 800–1000 °C. In this temperature range, elemental Cu develops as the predominant inorganic phase in the core of the rGO-coated nanoparticles. Notice that the Cu2O and CuNPs developed a faceted shape, i.e., their equilibrium crystal shape which is determined by the surface energy [32].

In all cases, TEM or FE-SEM images revealed that polydisperse rGO-Cu and rGO-Cu2ONPs were obtained, some of them displayed a highly faceted morphology. Temperatures lower than 1000 °C resulted in particles 5–170 nm in size with irregular shapes. The considerable dispersion in size and shape can be attributed to nanoparticle coalescence, as indicated by the arrows in Figure 4a.

The FE-SEM images (Figure 4b,c) display the striking morphology of the sample prepared at 1000 °C. It consists of highly faceted core–shell Cu-rGO nanostructures and small, nearly monodisperse 3 nm in size, rGO-CuNPs, all of them decorating the rGO sheets. Some holes in the rGO network are also observed. Previously, we suggested such holes originate from the carbon consumption by the CuNP to get the carbon coating. It is also seen that faceted nanostructures have curved rod-shaped nanostructures attached to specific crystal planes.

We carried out high angle annular dark field (HAADF) measurements to assess the chemical composition of the faceted nanoparticles. HAADF images and EDS line scans of a Cu-rGO nanoparticle and a rod-shaped nanostructure are shown in Figure 5a,b, respectively. From the EDS line-scan analysis in Figure 5a it is seen that the chemical composition of the particle mostly comprises copper and carbon, so corroborating the core–shell structure for faceted Cu-rGO nanoparticle. It is seen that oxygen is also present at low levels because of the partial removal of oxygenated groups from the graphene sheet. An EDS line-scan analysis across a rod-shaped nanostructure (Figure 5b) revealed that it mostly comprised of carbon and traces of copper. We have assumed that the curved rod-shaped nanostructures grow by the catalytic decomposition of GO sheets into carbon and oxygenated species, so promoting carbon supersaturation on the facet surface, and then nucleation and growth.

The FE-SEM image (Figure 6) shows the faceted morphology of the core–shell Cu-rGO particle of the sample prepared at 1000 °C, and the corresponding three-dimensional equilibrium crystal shape created using the Wulffman freeware [37,38] (Figure 6b). For the simulation, the crystallographic directions were estimated from the symmetries of the facets [39]. The facets present correspond to {111}, {110}, {100}, {113} and {530}. It is worthy to note that {530} facets are not typically reported for highly pure Cu, but in this case, as explained by Meltzman et al. [40], the presence of carbon layers at the surface, modifies the anisotropy giving rise to the appearance of other facets.

We describe the formation of faceted core–shell Cu2O-rGO and Cu-rGO nanoparticles on the surface of a Cu foil by annealing foil-supported graphene oxide (GO) under an Ar atmosphere. The predominant phase as well as the particle size and shape strongly depend on the process temperature, in the ranges of 200–600 °C and 800–1000 °C, Cu2O or Cu were obtained, respectively. It was demonstrated that rGO plays a dual role of stabilizing and protecting the Cu nanoparticles from further oxidation. In particular, at 1000 °C, the Cu nanoparticles exhibit an equilibrium crystal shape. The facets found out by simulation were {111}, {110}, {100}, {311} and {530}. The faceted nanoparticles display arm-like carbon nanorods originating from different facets of the copper crystal structure.

This project is supported by the National Council of Science and Technology (CONACyT) No. CB2009-128723, and scholarship No. 355201, also by the Institute of Science and Technology of Federal District (ICyT 326/11). The authors are very thankful to Dr. Jaime Santoyo Salazar for his valuable assistance for TEM characterization, also LANE-Cinvestav, especially Dr. Josué Romero Ibarra and Dr. Daniel Bahena Uribe for the FE-SEM and HR-TEM characterization.

© 2016 Ortega-Amaya et al.; licensee Beilstein-Institut.
This is an Open Access article under the terms of the Creative Commons Attribution License (http://creativecommons.org/licenses/by/2.0), which permits unrestricted use, distribution, and reproduction in any medium, provided the original work is properly cited.
The license is subject to the Beilstein Journal of Nanotechnology terms and conditions: (http://www.beilstein-journals.org/bjnano) 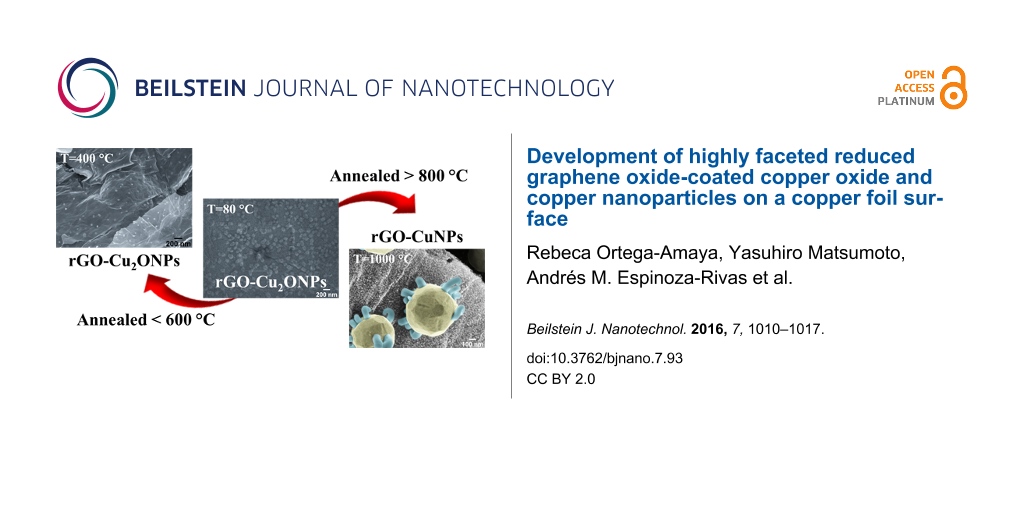