Electronic conduction during the formation stages of a single-molecule junction


All articles from this author
Tal Klein


All articles from this author
Ayelet Vilan

Single-molecule junctions serve as a versatile atomic-scale laboratory for quantum electronic transport [1,2]. The formation of such molecular junctions, where a molecule is suspended as a bridge between two metallic electrodes, was greatly facilitated by the development of the mechanically controllable break junction technique [3]. In a break junction (Figure 1a), molecules are introduced to a metallic junction while it is stretched. As a result, the junction is thinned to an atomic scale contact and eventually it breaks to form two electrode apexes. In some cases, a molecule is trapped between the electrodes, forming a single-molecule junction (Figure 1b). For more than two decades, the electronic transport properties of single-molecule junctions based on organic or organometallic molecules were explored in numerous of studies [1,2]. However, information about the conductance properties of such molecular junctions at their early stages of formation is missing. In fact, the conductance signature of premature configurations of molecular junctions (before breaking the atomic scale contact) was studied only for diatomic molecules [4-6]. Here, we use conductance measurements, inelastic electron spectroscopy, and shot noise analysis to identify the formation of a single-molecule junction based on an organometallic vanadocene molecule (Figure 1, inset) in parallel to a single atom silver (Ag) junction. The interplay between the two conductance pathways via the molecular bridge and across the metallic one is characterized in terms of additive independent conductance pathways, quantum interference between the two pathways, and deformed electronic structure by the presence of molecules. Finally, we reveal the different scenarios of structural evolution from premature junction configurations towards the formation of a typical metal–molecule–metal junction, bringing to light the early steps of single-molecule junction formation.

We use the mechanically controllable break junction (MCBJ) technique [3] to fabricate atomic-sized junctions (Figure 1a,b). A Ag wire (99.997%, 0.1 mm, Alfa Aesar) with a notch in its center is fixed onto a flexible substrate. This structure is placed in a vacuum chamber and cooled to 4.2 K. To form an atomic scale junction, the substrate is pushed and bent at its center by a piezoelectric element. As a result, the two sides of the notch are pulled apart and the cross section of the notch is gradually reduced until a single-atom junction is formed between the wire segments [7]. Further bending leads to breaking of the wire and the formation of two freshly exposed electrode apexes in cryogenic vacuum conditions. Molecular junctions are prepared by sublimating vanadocene molecules (95%, Buchem, further purified in situ), from a locally heated molecular source towards the metallic junction, while repeatedly breaking and reforming the junction between the two electrodes to study molecular junctions with different local structure [8].

First, the conductance of the bare Ag junction was recorded as a function of the relative displacement of the electrodes' apexes. Figure 1c (inset) presents examples of such conductance traces (blue, left). During the breaking process, the conductance is reduced in a sequence of abrupt steps as the number of atoms in the junction’s cross section decreases [7]. The last plateau at ≈1 G0 is associated with a single-atom junction [9,10]. Further increase in the interelectrode separation leads to junction breakage and an abrupt conductance drop to the tunneling transport regime. When vanadocene molecules are introduced, additional conductance plateaus appear below 1 G0, indicating the formation of a metal–molecule–metal junction after the Ag contact is broken. Interestingly, the introduction of molecules into the metal junction also yields new plateaus at ≈1.3 G0, which is above the typical conductance of a single-atom junction. These conductance plateaus clearly indicate the presence of molecules, since they cannot be found for bare Ag junctions.

The exact details of the mentioned conductance plateaus can be different for different conductance traces due to variations in the atomic scale structure of repeatedly formed junctions. To collect statistical information about the most probable conductance of the bare Ag and Ag–vanadocene junctions, we constructed conductance histograms based on thousands of traces. Figure 1c presents two conductance histograms taken before and after the introduction of vanadocene molecules. The histogram for bare Ag junctions (blue) shows a conductance peak at ≈1 G0, which is related to single-atom junctions, and a tail at low conductance due to electron tunneling after the junctions are broken. The introduction of vanadocene molecules (light blue histogram) yields another conductance peak at ≈0.5 G0, which is lower than the typical conductance of the Ag atomic junction, as expected when a molecule bridges two metallic electrodes [8]. However, the emergence of another peak at ≈1.3 G0 in response to the introduction of molecules suggests the formation of a molecular junction in parallel to a metal atomic junction or, alternatively, the formation of a metal junction (e.g., a diatomic contact) with modified conduction due to adsorbed molecules. Individual traces (e.g., Figure 1c, inset) show that the 1.3 G0 plateaus are recorded before the 1 G0 plateaus. Namely, the associated structure with the 1.3 G0 plateaus is formed before the single-atom contact breaks. Thus, a third option of several molecules suspended between the electrodes that contribute a total conductance of 1.3 G0 is highly unlikely.

Inelastic electron spectroscopy [11-14] can offer valuable information about the structure of the combined metallic and molecular junctions. When an applied voltage (V) across a molecular junction exceeds the energy (in eV) of a certain molecular vibration mode, some of the transmitted electrons lose energy to excite the vibration mode. For weak electron–vibration coupling in the off-resonance regime, these electrons are inelastically scattered forward or backward, yielding a step up or down in the conductance (conductance enhancement or suppression), respectively [13]. The step is located at a voltage equivalent to the vibration energy and its height is equal to the inelastic conductance contribution to the overall conductance across the junction.

Using shot noise measurements, we can gain more reliable information about the distribution of conduction channels across the parallel atomic and molecular junctions. Specifically, shot noise analysis can provide information about quantum interference in electronic transport through the atomic and molecular pathways. Current shot noise is generated since each injected electron into the junction is either transmitted or scattered back, leading to time-dependent current fluctuations [16]. In the framework of Landauer formalism [17,18], shot noise depends on the number of conduction channels, i, across the examined junction and the transmission probability of each channel, τi. When an applied voltage across a quantum conductor such as an atomic or molecular junction satisfies eV >> kT, the generated shot noise is given by S = 2eIF where e is the electron charge, I is the current, and F = ∑i τi (1 − τi) / ∑i τi is the Fano factor that can be determined by the noise dependence on applied current bias [19].

The two independent equations for conductance and shot noise analytically provide the transmission probabilities for junctions with up to two conduction channels. Since the number of conduction channels across the examined junctions is unknown, the transmission probability of each channel is then determined numerically with a limited accuracy [20]. We start by assuming a certain number of channels and we find all possible transmission probabilities (with 1% resolution) that give the measured shot noise and conductance in a given junction. The process is then repeated for a higher number of channels until the results converge. This conduction channel analysis was shown to be very efficient in identifying a variety of electronic transport properties of atomic-scale junctions [20-24].

In contrast, Figure 3b exemplifies the typical channel distribution that was found for the remaining 10 examined cases. Here, the total conductance is given by two main channels, each with lower conductance contribution than 1 G0. The deviation from the trivial channel distribution can stem from distorted local electronic structure at the single-atom junction due to the presence of the molecular bridge or other nearby adsorbed molecules, such that the conductance of the metallic junction is suppressed [25,26]. The parallel molecular junction can also suppress the conduction via the atomic junction by stabilizing atomic structures that do not usually survive in bare metallic junctions [27] (e.g., allow elongated structures with a large inter atomic distance). Alternatively, quantum interference between the molecular and the atomic pathways can generate such nontrivial channel distribution. The first option (i.e., distortion of the local electronic structure) should also lead to asymmetric widening of the 1 G0 peak in the conductance histogram towards lower conductance, since the presence of adsorbed molecules may lower the conductance of the single-atom junction even in the absence of a parallel molecular bridge. Such an asymmetric widening is indeed observed for the 1 G0 peak in Figure 1c. So although we cannot rule out quantum interference in the examined cases, most likely the conductance suppression observed for the main channel results from the influence of the nearby adsorbed molecule(s) on the electronic structure of the single Ag atom junction.

The early stages of single-molecule junction formation are analyzed in this work with the aid of conductance vs displacement measurements in a break junction setup, inelastic electron spectroscopy and shot noise analysis. We establish the existence of parallel molecular and atomic junctions, where a single vanadocene junction is constructed in parallel to a single Ag atom junction between two Ag electrodes. The combination of inelastic electron spectroscopy and shot noise analysis allows us not only to address the total conductance of the parallel junctions as in standard conductance measurements but also to estimate the relative contribution of the two pathways to the total conductance. We found that in about two thirds of the examined cases the conductance contributions of the neighboring junctions are independent and additive. However, in about one third of the cases, the contribution of each one of the two main conduction channels is lower than the typical conductance of a single-atom junction. This deviation can be explained by molecule-induced distorted local electronic structure or by quantum interference. Finally, the formation of a single-molecule junction from premature junction structures is analyzed, revealing a rich set of scenarios for structural evolution towards the final realization of a single-molecule bridge, not necessarily via the parallel junction configuration. Hopefully, further study of premature junction structures and their evolution towards single-molecule junctions will pave the way for directed formation of desired molecular junction structures by controlling their structural evolution.

The authors are thankful to the valuable help of Nadav Genossar and Lev Khmelnitsky. OT thanks the generous support of the Harold Perlman family, and acknowledges funding by the Israel Science Foundation (Grant No.1089/15) and the Minerva Foundation (Grant No. 120865).

© 2018 Pal et al.; licensee Beilstein-Institut.
This is an Open Access article under the terms of the Creative Commons Attribution License (http://creativecommons.org/licenses/by/4.0), which permits unrestricted use, distribution, and reproduction in any medium, provided the original work is properly cited.
The license is subject to the Beilstein Journal of Nanotechnology terms and conditions: (https://www.beilstein-journals.org/bjnano) 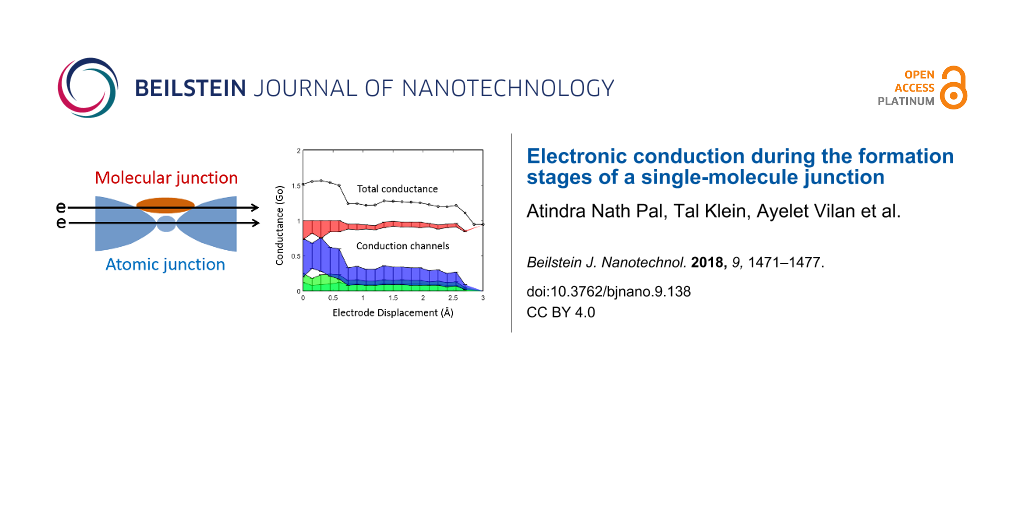