All articles from this author
Wei Jiang


All articles from this author
Shiwei Hu


All articles from this author
Yu Liu


All articles from this author
Yanping Liu


All articles from this author
Kaibing Xu


All articles from this author
Jianshe Liu

Developing highly active and durable visible-light-driven photocatalysts for the degradation of toxic pollutants is of vital significance. Herein, Ag2CO3 nanoparticles were in situ formed on Bi2MoO6 microflowers to produce Ag2CO3/Bi2MoO6 heterostructures via a facile procedure. The morphologies, phases, chemical compositions, and optical properties of Ag2CO3/Bi2MoO6 were examined by multiple characterization techniques. The Ag2CO3/Bi2MoO6 heterostructures exhibited substantially improved performance in the removal of industrial dyes (rhodamine B (RhB), methyl orange (MO), and methyl blue (MB)), and the antibiotic tetracycline hydrochloride (TC), compared with bare Bi2MoO6 and Ag2CO3 under visible-light irradiation. The enhancement of activity was attributed to the high charge-separation capacity, which results from the matched band alignment of the two components. The cycling experiments showed a good durability of Ag2CO3/Bi2MoO6. Holes were found to be the dominant active species accounting for the pollutant degradation. This compound is a promising candidate for wastewater treatment.

Industrial pollutants, such as industrial dyes and antibiotics, in wastewaters pose a huge threat to the environment [1,2]. Thus, many methods for pollutant removal have been established. However, the conventional wastewater treatments are usually accompanied by high cost, low efficiency and other insufficiencies [2]. The decomposition and mineralization of pollutants under sunlight through photocatalysis has been demonstrated to be an effective and green technology for environmental remediation [3-6]. Crucial to photocatalysis is to obtain high-performance photocatalysts [7,8]. Obtaining excellent photocatalysts that can be excited by visible light (43% of the solar energy spectrum) is very important for practical applications [9-14].

Bi2MoO6 has been regarded as a promising visible-light-driven (VLD) photocatalyst because of its good activity, chemical stability and nontoxicity [15-17]. However, the low carrier-separation rate and narrow photo-response range of Bi2MoO6 substantially lower its photocatalytic performance [18,19]. To overcome this obstacle, various methods have been developed, including doping [20,21] and the construction of heterojunctions [22-33]. Particularly, the combination of Bi2MoO6 with other semiconductors to construct heterojunction photocatalysts leads to an enhanced activity of Bi2MoO6, which originates from the increased charge separation at the interface [22-30].

Recently, Ag-based compounds (e.g., Ag3PO4, Ag3VO4, Ag2CrO4, and Ag2CO3) [34-36] have emerged as good VLD photocatalysts for pollutant removal. Ag2CO3 exhibits a high visible-light photocatalytic activity [37]. However, it is unstable under illumination. Previous studies found that the good stability of Ag2CO3 could be achieved through the rational construction of heterojunctions, such as Ag2CO3/Bi2WO6 [37], Ag2O/Ag2CO3 [38], Ag2CO3/Bi2O2CO3 [39], Ag2CO3/C3N4 [40], Ag/Ag2CO3/BiVO4 [41] Ag2CO3/AgBr/ZnO [42], and Ag/Ag2CO3/Bi2MoO6 [32]. The band structure of Ag2CO3 matches well with that of Bi2MoO6 [32]. Moreover, morphology modulation is another significant way to enhance photocatalytic activity. Three-dimensional nanostructures endow materials with unique physicochemical properties, for instance, high specific surface area, good molecular diffusion/transport, and good recyclability and light harvesting ability. To the best of our knowledge, application of Ag2CO3 nanoparticles coupled with flower-like Bi2MoO6 for photocatalytic degradation of toxic pollutants remains unreported.

To visually study the microstructure and morphology of Ag2CO3/Bi2MoO6, SEM images of the as-prepared catalysts were taken. Bare Bi2MoO6 presents a hierarchical microsphere structure (diameter: 1.6–3.5 μm, Figure 2a,b). After Ag2CO3 was loaded onto Bi2MoO6, the resulting Ag2CO3/Bi2MoO6 retained the flower-like architecture. The representative ACO/BMO-30 displays the flower-like structure, the surface of which is decorated with Ag2CO3 nanoparticles (size: 10–50 nm, Figure 2c,d). In contrast, the previously reported Ag/Ag2CO3/Bi2MoO6 is composed of Bi2MoO6 nanoplates and Ag/Ag2CO3 nanorods/nanoparticles [32].

Further information about the structure of ACO/BMO-30 was collected from TEM images (Figure 3). The TEM images are in line with the SEM observations, i.e., ACO/BMO-30 exhibits a flower-like architecture loaded with Ag2CO3 nanoparticles (Figure 3a,b). The HRTEM displays two different lattice spacings of 0.32 and 0.43 nm, which match well with the (121) planes of orthorhombic Bi2MoO6 and the (110) planes of monoclinic Ag2CO3 (Figure 3c). Moreover, the energy-dispersive spectroscopy (EDS) pattern confirmed the existence of Ag, C, O, Bi, and Mo in ACO/BMO-30 (Figure 3d).

The band gap energy (Eg) can be estimated from the Tauc plot: (αhν) = A(hν − Eg)n/2. Where α, h, ν, and A are absorption coefficient, Planck’s constant, the frequency of light, and a constant, respectively. The value of n depends on the type of electronic transition and n is equal to 1 for Bi2MoO6 and Ag2CO3. The Tauc plots of Ag2CO3 and Bi2MoO6 converted from the UV–vis DRS measurements are shown in Figure S1 (Supporting Information File 1). The band gaps are determined to be 2.17 for Ag2CO3 and 2.66 eV for Bi2MoO6.

The band potentials of Ag2CO3 and Bi2MoO6 can be estimated by the empirical equations:

PL spectra were measured to analyze the electron–hole-separation efficiency [45-47]. Figure 5 shows the contrast between the PL spectra of bare Bi2MoO6 and of ACO/BMO-30. The emission peak of Bi2MoO6 is centered at ca. 465 nm under an excitation wavelength of 300 nm. Intriguingly, the PL emission intensity of Bi2MoO6 was reduced after the introduction of Ag2CO3. A similar phenomenon was also found in Ag/Ag2CO3/Bi2MoO6 [32] and Ag2MoO4/Bi2MoO6 [22]. This result shows that the charge separation efficiency is enhanced in ACO/BMO-30.

The efficiency of Ag2CO3/Bi2MoO6 heterostructures in the photocatalytic degradation of industrial dyes (RhB, MO and MB), and the antibiotic TC of the under visible light was measured. Figure 6a displays the degradation of RhB as a function of the time. The RhB concentration remains unchanged in the absence of catalysts. In the presence of bare Bi2MoO6 and Ag2CO3 only 39.8% and 58.7% of RhB were degraded after 90 min of reaction time. The degradation of RhB was substantially enhanced when a combination of Bi2MoO6 and Ag2CO3 was used. For instance, the introduction of a low amount of Ag2CO3 (10 wt %) resulted in 74.9% degradation of RhB. Obviously, the RhB degradation performance is closely related to the loading amount of Ag2CO3. Among the heterostructures, ACO/BMO-30 achieves the best activity in the degradation of RhB, with 100% degradation efficiency after 60 min of reaction time. ACO/BMO-10, ACO/BMO-20 and ACO/BMO-50 showed degradation efficiencies of 60.2%, 69.6%, and 85.1%, respectively. Remarkably, a mixture of 23.1 wt % Ag2CO3 and 76.9 wt % Bi2MoO6 exhibited a much lower activity than ACO/BMO-30, verifying that the close contact between the components also has a significant influence on the photocatalytic performance of the heterostructures.

To examine the mineralization ability of ACO/BMO-30, the total organic carbon (TOC) was measured during the RhB degradation, and the result is presented in Figure S4 (Supporting Information File 1). Apparently, the TOC removal efficiency gradually goes up with the increase of reaction time and the final TOC removal efficiency is as high as 80.6% after 5 h of reaction. Hence, ACO/BMO-30 shows a decent mineralization ability.

To test the durability of ACO/BMO-30, repeated runs were carried out under unchanging conditions. As depicted in Figure 8a, after six consecutive runs, the RhB degradation efficiency is still about 92.2%. Additionally, no apparent change of the crystalline structure was found after the photocatalytic reactions, as shown in the XRD pattern (Figure 8b). However, the XPS pattern of the used ACO/BMO-30 suggests that some Ag+ is reduced to Ag(0) after the reaction (Figure S5, Supporting Information File 1). It has been recognized that the formation of Ag/Ag2CO3 shows a stable structure [32]. These results verify that ACO/BMO-30 is stable. It is rationally speculated that ACO/BMO-30 has great potential for the elimination of toxic pollutants.

Based on the above results, a possible schematic mechanism is presented in Figure 10. In the Ag2MoO4/Bi2MoO6 system [22], electron–hole pairs can only be generated by visible light in Bi2MoO6. In comparison, both Ag2CO3 and Bi2MoO6 are able to absorb visible light and, and charge carriers are photo-generated on the surface of Ag2CO3 and Bi2MoO6. The electrons in the CB of Bi2MoO6 can partially transfer into that of Ag2CO3. The electrons are then captured by the oxygen, producing •O2− radicals, which play a minor role in decomposing pollutants, as confirmed by the radical-scavenger test (Figure 9). At the same time, the holes in the VB of Ag2CO3 can partially flow into that of Bi2MoO6. The holes in both components mainly account for the pollutant degradation (Figure 9). Electron–hole recombination is severely inhibited, as verified by PL results (Figure 5) [53,54]. Although the VB potential of Ag2CO3 (2.6 eV) is more positive than that of H2O/•OH (2.38 eV/NHE at pH 7), the generated •OH radicals did not act as the major active species for pollutant degradation (Figure 9). In Ag/Ag2CO3/Bi2MoO6, Ag(0) can also be excited to generate electrons, reacting with O2 to form •O2− radicals due to the plasmon resonance (SPR) effect [32]. Based on above analysis, the rational design and construction of Bi2MoO6-based heterostructures is favorable for the separation of charges, leading to a superior activity in pollutant degradation.

Flower-like Bi2MoO6 was synthesized using a solvothermal route. Typically, Na2MoO4·2H2O (1 mmol) was dissolved in a mixture of 40 mL of CH3CH2OH and 40 mL of ethylene glycol with the aid of ultrasonic treatment. Then Bi(NO3)3·5H2O (2 mmol) was also dissolved in the above solution in the same way. Subsequently, the solution was magnetically stirred for 1 h, and then loaded into a 100 mL Teflon container and reacted at 160 °C for 25 h. After the reaction system had cooled down to room temperature, the precipitants were washed thoroughly with deionized water and ethanol, dried, and calcined at 350 °C for 1 h.

Ag2CO3/Bi2MoO6 heterostructures were obtained by wet-chemical deposition. Typically, 0.6 g Bi2MoO6 was ultrasonically dispersed in 30 mL of deionized water. Then AgNO3 solution (0.1 M) was poured into the suspension and kept stirring for 1 h in the dark. Subsequently, NH3·H2O (0.05 M) was added into the above mixture. After that, NaHCO3 solution (0.1 M) was dropped into the above system slowly under magnetic stirring in the dark, followed by stirring for another 2 h. The collected solid was washed, and dried at 70 °C overnight. By varying the added amounts of AgNO3, NaHCO3, and NH3·H2O, the as-prepared Ag2CO3/Bi2MoO6 heterojunctions with various weight ratios (0. 1/1, 0.2/1, 0.3/1 and 0.5/1) were obtained and denoted as ACO/BMO-10, ACO/BMO-20, ACO/BMO-30, and ACO/BMO-50, respectively. For comparison, pure Ag2CO3 was prepared by the same method without the addition of Bi2MoO6. A mixture of Ag2CO3 and Bi2MoO6, symbolized as mixture, was prepared by simple physical mixing.

The microstructure of the samples was observed with a Hitachi S-4800 scanning electron microscope (SEM) and a JEM-2010F transmission electron microscope (TEM). The corresponding chemical compositions were detected by energy-dispersive X-ray (EDX) spectroscopy equipped on the SEM. The crystal structure of catalysts was identified by X-ray diffractometry (XRD, Bruker D8 Advance) with a scanning range of 2θ from 20° to 80°. The UV–vis spectra were recorded using an UV-2600 UV–vis spectrophotometer (Shimadzu). The photoluminescence (PL) emission spectra of the samples were recorded on a Hitachi F-7000 spectrophotometer, employing an excitation wavelength of 300 nm.

The photo-degradation of RhB, MO, TC and MB was carried out in a reactor containing 40 mg of sample, and 100 mL of RhB (10 mg·L−1), MO (10 mg·L−1), TC (20 mg·L−1) or MB (10 mg·L−1) under visible-light irradiation. A 300 W xenon lamp equipped with a UV-cutoff filter (λ > 400 nm) served as the light source. First, the suspension was stirred in the dark for half an hour. During reaction, 2 mL of solution was taken at certain intervals, and centrifuged to obtain the supernatant for UV–vis spectrophotometry measurements. Total organic carbon (TOC) tests were executed by the degradation of RhB (50 mg·L−1, 150 mL) solution with 300 mg of ACO/BMO-30 as the catalyst.

© 2018 Li et al.; licensee Beilstein-Institut.
This is an Open Access article under the terms of the Creative Commons Attribution License (http://creativecommons.org/licenses/by/4.0). Please note that the reuse, redistribution and reproduction in particular requires that the authors and source are credited.
The license is subject to the Beilstein Journal of Nanotechnology terms and conditions: (https://www.beilstein-journals.org/bjnano) 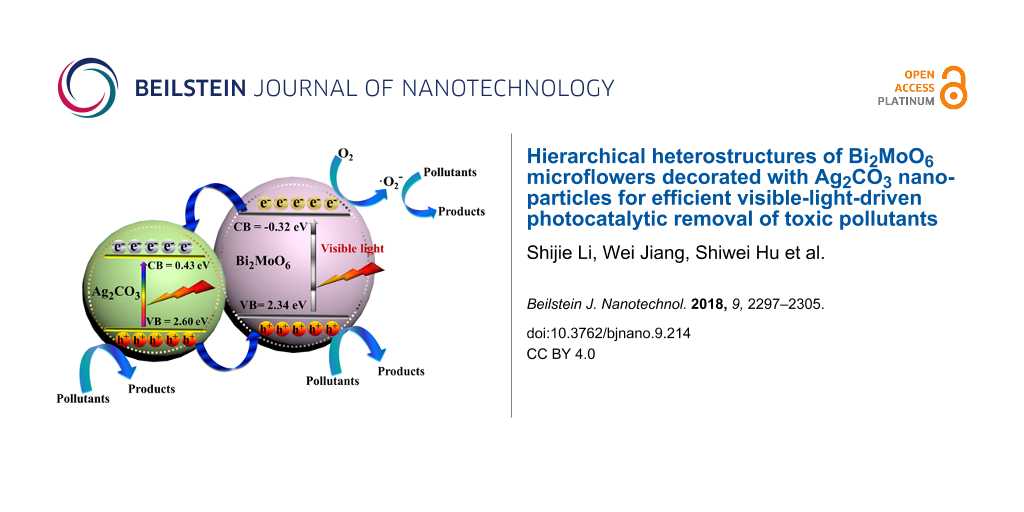