The influence of small ferroelectric BaTiO3 particles on the planar–homeotropic transition threshold voltage in smectic A liquid crystals consisting of p-nitrophenyl p-decyloxybenzoate and 4-cyano-4′-pentylbiphenyl were studied by using capacitance–voltage (C–V) measurements. It was shown that the BaTiO3 particles significantly reduce the threshold voltage. The obtained result is explained by two factors: an increase of dielectric anisotropy of the liquid crystals and the formation of a strong electric field near polarized particles of BaTiO3. It was shown that the role of the second factor is dominant. The explanations of some features observed in the C–V characteristics are given.

Interest in liquid crystals (LC) as a unique state of matter arises not only from a scientific point of view but also because of the great practical significance of LCs [1-3]. Flat panel displays based on LC have great advantages such as low power consumption, low cost, simplicity of manufacturing technology and small dimensions [4]. The growing needs in display technology (improved image quality improving, reduced power consumption and size) requires the enhancing exploitation characteristics of used LC. One of the ways to solve this problem is the purposeful synthesis of new LCs with enhanced parameters, while another alternative way is the constructive combination of LC properties with properties of other functional materials. In polymer-dispersed LCs used in flexible displays, small drops of LC are distributed in a polymer medium [5]. In colloidal LC composites, vice versa, micrometer- or submicrometer-sized particles of various nature (e.g., ferromagnetic or ferroelectric) are dispersed in an LC medium. Even a small amount of such particles leads to colossal changes in the properties of LC and causes qualitatively new effects [6-8]. Particularly interesting results were obtained in colloids consisting of nematic LCs and ferroelectric particles. LCs doped with a small quantity of ferroelectric BaTiO3 nanoparticles were found to exhibit a nonvolatile electromechanical memory effect in the isotropic phase [9]. Ferroelectric nanoparticles reduce the threshold voltage by enhancing the dielectric anisotropy of the nematic LC and the system becomes sensitive to the sign of the applied electric field [10]. The Fréedericksz transition occurs at least in two stages when the BaTiO3 nanoparticles are added to the liquid crystal [11,12].

Thanks to the layered structure, smectic LCs have special physical (mechanical, electrical and optical) properties, which opens up wide possibilities for their application in display and non-display applications [14]. If the smectic A LC is used as a matrix in a colloid, then it is not necessary to use a stabilizer, since the high viscosity due to the presence of translational order in one direction almost eliminates the aggregation of particles. On the other hand, the high viscosity of the smectic A LC causes an electro-optical effect with memory, which makes them highly promising when applied in devices for recording and displaying of information. Despite these advantages, the threshold voltage and rise time of the electro-optical effects in smectic A LCs are much higher in comparison with nematic LCs [15]. In this work, the possibility of reducing the planar–homeotropic transition threshold voltage in smectic A LC by doping with submicron ferroelectric particles of BaTiO3 is shown.

The smectic A LC is a mixture of p-nitrophenyl p-decyloxybenzoate and 4-cyano-4′-pentylbiphenyl with a molar ratio of 1:1. The mixture is in the smectic A phase in the temperature range of 32.5–47.0 °C and has positive dielectric anisotropy.

BaTiO3 is a ferroelectric material with high spontaneous polarization (0.26 C·m−2 at room temperature) [16,17]. In our experiment, the BaTiO3 particles with an average size of 500 nm have been used (US Research Nanomaterials Inc.). BaTiO3 particles with a size higher than 100 nm have a tetragonal crystal lattice and are ferroelectric [18]. The volume fraction of BaTiO3 particles was 0.002. Dispersion of BaTO3 particles in a smectic A LC was carried out according to the following procedure: After weighing (balance ADAM PW-124), particles were added to the LC, then the mixture was shaken for 40 min in Ultrasonic Cleaner (NATO CD-4800) at 75 °C (isotropic phase) with subsequent cooling to 35 °C (smectic A phase). The transition to the smectic A phase at 47 °C prevents the aggregation of particles.

The homeotropic-planar transition in a smectic A LC occurs in the form of deformation, destruction and rearrangement of smectic layers under the action of an electric field. Microphotographs (Figure 1 and Figure 2) present the final pictures after a long-term application of voltage. If the applied voltage exceeds the threshold voltage, the smectic layers are destroyed and rearranged, but an ideal homeotropic structure is not obtained. However, if the applied voltage is sufficiently high, the final state is close to homeotropic.

As mentioned above, the threshold voltage is determined from the capacitance–voltage measurements of the electro-optical cell initially having planar alignment. The threshold voltage corresponds to the voltage at which the capacitance of the cell or the effective dielectric permittivity starts to increase. Note that the latter is determined as the ratio ε = C/C0, where C and C0 are the capacitances of the filled cell and an empty cell, respectively. Figure 3 presents the effective dielectric permittivity as a function of the voltage for pure smectic A LC (circles) and a colloid of smectic A LC + BaTiO3 particles (filled circles). The threshold voltage (Uth = 18 V) of the colloid is almost one and a half times less than that of pure smectic A LC (Uth = 28 V). In addition, the colloid exhibits a slight increase (between 0 and 6 V) with a subsequent decrease (between 6 and 18 V) of the permittivity.

Here, d is the cell thickness, l is the distance between smectic layers, K11 is the splay elastic constant and ε0 = 8.85 pF/m is the vacuum permittivity. According to [20], the BaTiO3 particles practically do not change the value of the elastic constant K11. Equation 1 shows that the increase in dielectric anisotropy by 1.2 times reduces the threshold voltage only by 1.1-times. In recent theoretical papers devoted to LC colloids [21,22] containing ferroelectric nanoparticles, the reducing of Fréedericksz effect threshold voltage was related to the modification of dielectric anisotropy of LC and the calculated decrease of the threshold was also insignificant.

The observation of the weak maximum at 6 V in the case of the colloid (Figure 3) can be explained as follows: In the linear approximation, the dielectric constant of the colloid consisting of liquid crystal and ferroelectric particles can be represented in the form

Here, f is the volume fraction of ferroelectric particles, εLC(E) and εFP(E) are the permittivity values of LC and ferroelectric particles both depending on the electric field strength E. Ferroelectric particles have a dipole moment due to residual polarization and in the absence of a field their dipole moments are oriented parallel to the LC molecules (polarization–director coupling [23]). When an electric field is applied, these dipoles rotate to oriente themselves in the direction of the field, that leads to an increase in the dielectric constant of the colloid (the first section of the curve in Figure 3). If the applied field exceeds the threshold value, εLC(E) significantly increases, which is reflected in the dielectric permittivity of the colloid (third segment). Figure 3 shows that the dielectric constant of the colloid after the planar–homeotropic transition is much lower than that of the pure LC. This is due to the imperfection of the final homeotropic state (Figure 2,c).

The decrease in the permittivity in the voltage range from 6 to 16 V (the second part of the curve in Figure 3) is associated with a slowing of the ratio P/E when the polarization approaches saturation. According to the formula

Embedding a small amount of submicrometer-sized ferroelectric BaTiO3 particles in a smectic A liquid crystal caused appreciable changes of the electric field dependence of the dielectric constant: An increase in the dielectric constant at small fields is observed, which is explained by the rotation of ferroelectric particles in the LC medium. After that a small decrease due to monodomainization of these particles occurs, and finally a strong increase in the dielectric constant as a result of the planar–homeotropic transition is measured. The doping of smectic A liquid crystal with ferroelectric BaTiO3 particles also reduces the threshold voltage of the planar–homeotropic transition, which can be explained by the appearance of a strong local electric field around the polarized BaTiO3 particles.

The authors gratefully acknowledge the financial support of The Joint Institute for Nuclear Research, in cooperation with the CIS International Innovation Center for Nanotechnologies and with the support of the Interstate Humanitarian Cooperation Fund of the CIS Member States Grant no. 080-303.

© 2018 Imamaliyev et al.; licensee Beilstein-Institut.
This is an Open Access article under the terms of the Creative Commons Attribution License (http://creativecommons.org/licenses/by/4.0), which permits unrestricted use, distribution, and reproduction in any medium, provided the original work is properly cited.
The license is subject to the Beilstein Journal of Nanotechnology terms and conditions: (https://www.beilstein-journals.org/bjnano) 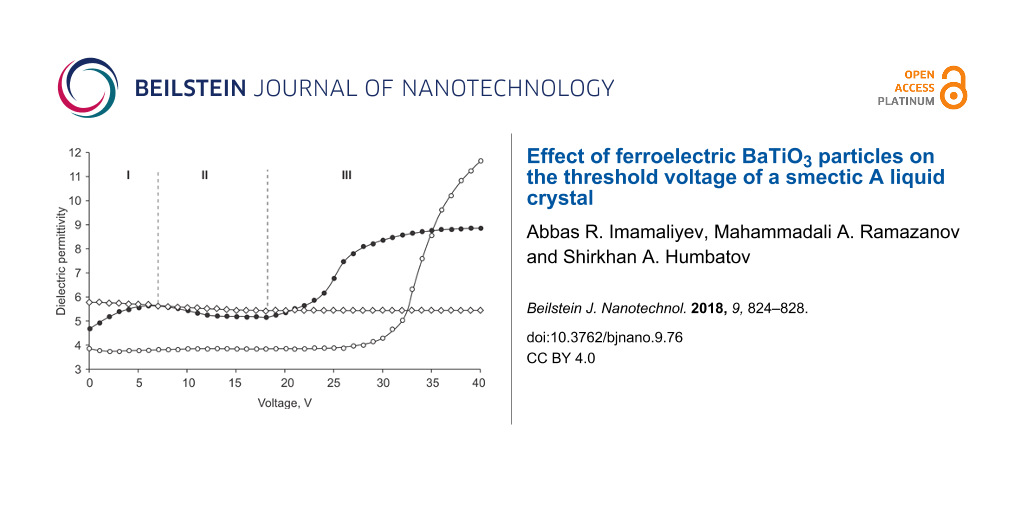