All articles from this author
Jozef Kožíšek


All articles from this author
Peter Koóš


All articles from this author
Tibor Gracza

Over the last decades, an enormous work has been devoted to find an efficient stereoselective route to variously substituted tetrahydrofurans [14,15]. Among many described transformations, the metal-catalysed carboetherification reactions [16-18] and intramolecular oxycarbonylations of alkenes [19-21] are of particular importance. Although, many of these synthetic routes have showed their potential, there is still an area for improving the scope and stereocontrol of the new synthetic construction of substituted tetrahydrofurans.

Based on our continuous interest in the palladium-catalysed cyclisation reactions and their applications in natural product syntheses [24,25], we have decided to explore the substrate scope and the limitations of this transformation. With this aim, we detailed the synthesis of a number of alkene alcohols, and described different catalytic systems in the Pd-catalysed cyclisation reaction. Additionally, we have also outlined the synthetic approach to substituted 2,5-dioxabicyclo[2.2.1]heptane and 2,6-dioxabicyclo[3.2.1]octane rings. Such substituted bicyclic rings are of further interest as they are the core substructures in a number of marine derived metabolites, including ocellenynes and sorangicin A.

Palladium-catalysed cyclisations are substrate selective reactions. In most cases, the literature known cyclisation using similar substrate (with even small change in its substructure) can lead in different product formation. Although, there are several known rules-reactions (β-hydride elimination, η3-complex formation...) which are applicable to predict the behaviour of the used substrate in the Pd-catalysed reaction, there are cases where the results of such reactions still remain on experimental findings.

While the cyclisation reactions of alkenols have been relatively well described in the literature, only less attention was given to the reactions of unsaturated polyols. However, such cyclisations can provide a variety of products which are useful intermediates in many natural product syntheses. With this aim, we have designed syntheses of several substrates bearing different double bonds and substituents to cover certain possibilities for Pd-catalysed cyclisation screening.

The preparation of substrates 20–23 having a symmetrically disubstituted C–C double bond is depicted in Scheme 2. The synthesis started from known threose 15 [31] followed by a common synthetic sequence comprising the olefination reaction and the hydrolysis of the acetonide protecting group. Thus, Horner–Wadsworth–Emmons olefination of aldehyde 15 furnished the corresponding separable mixture of Z and E alkenes 16 and 17. In the case of utilising stabilised phosphorane ylides, the Wittig reaction provided only Z alkenes 18 and 19. Following acidic hydrolysis provided α-O-benzyl substrates 20–23 in good yields. Additionally, the synthesis of substrate 30 with 1,1-disubstituted C–C double bond was accomplished in 3 steps. The addition of methylmagnesium chloride to previously prepared threose 15, followed by Dess–Martin oxidation of the secondary alcohol gave methylketone 29. Subsequent Wittig olefination using (methylidene)triphenylphosphorane ylide and final hydrolysis of the acetonide provided the desired C5-substrate 30.

The synthesis of substrates 24–28 bearing an allylic hydroxy group is pictured in Scheme 3. At first, the ester group of previously prepared intermediate E-17 was reduced using DIBAL-H [32] providing the known allylic alcohol in very good yield. Following protection of the primary alcohol yielded fully protected alkene-tetraol and subsequent chemoselective removal of the acetonide protecting group in one pot led to substrates 24–26. The synthesis of substrate 28 bearing a tertiary allylic alcohol was performed in a two-step sequence. The addition of methyllithium to ester Z-17 and following deprotection of the corresponding alcohol 27 with aqueous acetic acid afforded tetraol 28 in good yield.

Thus, L-proline-catalysed oxidation of 31 with 2-nitrosotoluene gave the optically pure O-selective nitrosoaldol product 32, which underwent a reaction with the corresponding Grignard reagent in the presence of CeCl3·2LiCl providing diols 33–35 in good overall yields and high diastereoselectivity (d.r. >20:1).

Additionally, allylic acetate 37 was obtained starting from 33 in a seven-step sequence in 30% overall yield. The acetonisation of hydroxy groups of the previously prepared diol 33, followed by OsO4 dihydroxylation of the C–C double bond provided the corresponding diol in good yield. The resulting vicinal diol was then cleaved by sodium periodate to the corresponding aldehyde, which was immediately subjected to a Horner–Wadsworth–Emmons olefination using diethyl carbethoxyethylidenephopsphonate. Reduction of the resultant ester with DIBAL-H in dichloromethane afforded partially protected triol 36 in 39% yield over five steps. Finally, acetylation of the primary hydroxy group and subsequent removal of the acetonide provided the target compound 37 in good yield (77%).

Synthesis of the similar substrate rac-42 having two conjugated double bonds is shown in Scheme 5. The synthesis started from the known acetate 38, which was obtained by acetylation of commercially available non-3-ene-1-ol [34]. Epoxidation of acetate 38 with MCPBA in dichloromethane and subsequent acidic epoxide hydrolysis produced the syn-diol rac-39. The following protection of diol rac-39 as its acetonide and the primary hydroxy group deprotection using sodium methoxide afforded alcohol rac-40 in good yield (43% over 5 steps). Next, Swern oxidation of the primary hydroxy group provided the aldehyde, which was then transformed to diene derivative rac-41 by Wadsforth–Emmons olefination using diethyl allylphosphonate. Final deprotection of the hydroxy groups furnished rac-42 in 63% yield.

In addition, enantiomerically pure substrate 43 was synthetised from D-glucose in 11 steps according to a protocol of Szewczyk [35] (Figure 3).

Prepared substrates were then subjected to the Pd-catalysed transformation under several reaction conditions. At first, we tried the reaction conditions which were recently developed for the bicyclisation of α-O-benzyl-protected polyols bearing a terminal alkene moiety [22]. Thus, the reactions incorporating the PdII–Pd0 catalytic cycle (Scheme 6) were carried out using PdCl2 (0.1 equiv) as a catalyst, CuCl2 (3 equiv) as a reoxidant, NaOAc (3 equiv) as a buffer in AcOH at room temperature (Table 1, Method A, see Supporting Information File 1 for full experimental data).

It is clear, that the chemoselectivity of the cyclisation reaction directly correlates to the nature of the C=C bond of the substrate. Also, the configuration and the position of participating substituents have immense influence on the reaction output and the obtained results showed that the cyclisation reactions can progress through four different transformation pathways, yielding various types of products (I, II, III and IV).

Under these conditions (method A) the reactions of the simplest alkenols having a terminal alkene moiety and those with an α-O-protected allylic system, i.e., 11 [23] (Table 1, entry 1) and 12 (Table 1, entry 2) provided corresponding bicycles of the type I. Likewise, the alkenediol 33 without α-allylic hydroxy group provided bicyclic product 51, however, as a minor product in only 15% yield along with the furan compound 52 (Table 1, entry 4). The furan derivative 52 in this reaction was probably formed through a monocyclisation, followed by β-H−-elimination and aromatisation. In the case of substrate 13 having an unprotected α-hydroxy group, the reaction provided only a mixture of unidentified products (Table 1, entry 3). These results are consistent with previous observations and it is evident that a protection of the α-allylic hydroxy function is required for a successful bicyclisation reaction.

Next, we have also examined the compatibility of substrates having a symmetrically disubstituted C=C bond in the cyclisation reactions. Unfortunately, butadienes rac-42 and 43 underwent uncontrollable transformations under these conditions providing a complex mixture of products. Similarly, the transformations of substrates 20, Z-21, 22 and 34 failed, while the reaction of E-21 (Table 1, entry 5) afforded surprisingly tetrahydrofuran derivative 46 as a product of a Wacker-type cyclisation.

Interestingly, the reactions of alkenols having an additional allylic OR group provided only products of type II. Thus, diastereomeric mixtures of vinyltetrahydrofurans 47, 48 (Table 1, entry 6), 49, 50 (Table 1, entry 7) and 56, 57 (Table 1, entry 8) were formed starting from alkenols 24–26, 28 and 37. Formation of these products (type II) in this type of PdII-catalysed cyclisation [21,39-43] possibly involved an intramolecular Wacker-type reaction to form PdII-intermediate E and subsequent regeneration of the PdII-catalyst via cleavage of the C–OR bond (Scheme 6).

Surprisingly, the reaction of 1,1-disubstituted alkenes 30, 35 (Table 1, entries 10 and 9) provided only chlorinated tetrahydropyran (type III) and tetrahydrofuran (type IV) derivatives. The chloroderivatives III and IV were probably formed from σ-alkyl PdII-complexes F and G by reductive elimination of Pd0 (Scheme 6). Additionally, the X-ray analysis [44] of 53 confirmed the absolute configuration and structure of the six-membered heterocycle (Figure 4).

Recently, Wolfe reported a tetrahydrofuran-forming reaction via Pd-catalysed carboetherification [45-49] under strong basic conditions in the presence of a phosphine ligand. In order to enhance the ligand affinity of the hydroxy group in the formation of σ-palladiumII-complex D (Scheme 6), we have decided to adopt the described conditions and to examine the transformation of alkenols in the presence of PdCl2(MeCN)2, butyllithium and LiCl (method B). Unfortunately, these experiments in most cases did not afford any cyclisation products and reactions of non-terminal olefinic substrates 20–23, 34, rac-42 and 43 provided only a complex mixture of inseparable products. However, terminal olefins 30 and threo-9 underwent chlorocyclisation most probably due to the presence of an excess of chloride anions (Table 1, entries 10 and 11). Interestingly, this chlorocyclisation reaction proceeded with high trans-diastereoselectivity, which is in accordance with Wolfe´s TS model [17,18]. In both cases, only 2,3-trans diastereomers 55 and 58 were isolated in good yields. In addition, this reaction represents a new synthetic access to the 3-hydroxy-2,3-trans-tetrahydrofuran skeleton and is complementary to the known X+-mediated cyclisation methodology producing exclusively 2,3-cis-diastereomer [14,15,50,51].

Based on the published findings, we have also examined the cyclisation reactions incorporating the PdII–PdIV catalytic cycle [52,53] (Scheme 6). The experiments were carried out using Pd(OAc)2 salt as a catalyst, PhI(OAc)2 as reoxidant, AcONa and Me4N+Cl− as buffer in AcOH (method C). Unfortunately, all reactions and their modifications (temperature, solvents: AcOH, AcOH–H2O, NMP, DMF, MeOH, THF, Et2O, DCM, CHCl3) did not provide cyclisation products and only complex mixtures of β-H−-elimination and consequential products were observed. Only one exception to previously unpleasant findings was a reaction of O-silyl-protected triol 12, which provided the bicycle 45 but only in a decreased yield of 40% (Table 1, entry 2).

To show the usefulness of such cyclisation products, we have investigated the possibility of employing prepared tetrahydrofuran derivatives bearing suitable moieties in the next cyclisation step (Scheme 7).

Gratifyingly, the chloromethyltetrahydrofurans 55 and 58 were both transformed into the bicyclic products 59 and 44 by treatment with sodium hydride in DMF. Also, this transformation step has approved the relative configurations of substituents on the tetrahydrofuran ring. Interestingly, an iodo-cyclisation reaction of a 1:3 diastereomeric mixture of vinyltetrahydrofurans 56 and 57 in acetonitrile provided only one corresponding product derived from 56. Thus, pure (4R,7R)-4,7-disubstituted 2,6-dioxabicyclo[3.2.1]octane 60 was isolated in 52% yield. The trans arrangement of the substituents at C4/C7 in the product of the 6-endo-trig cyclisation was determined by means of 1H NMR and NOE interactions.

In conclusion, we have also shown the possibility to construct interesting bicyclic intermediates in a 2 step sequence combining the PdII-catalysed cyclisation [36-40] or Pd0-allylic substitution [42,43] of alkenols having an allylic OR group and additional halocyclisation.

In summary, we have developed the syntheses of several unsaturated alcohols. The chiral alkenols 20–28, 34–37 and 43 represent useful C5–C12 chain building blocks.

The stereoselective PdII–CuII-catalysed cyclisation [22] and its substrate scope has been investigated. The bicyclisation reaction appears to be applicable only to terminal olefinic substrates, while the reaction of alkenols bearing nonterminal and/or disubstituted olefins did not provide bicyclisation products. Moreover, alkenes having both an allylic OR group and a hydroxylated tether underwent intramolecular Wacker-type cyclisation affording corresponding vinyltetrahydrofurans, which constitute useful intermediates for the synthesis of naturally occurring tetrahydrofuran derivatives.

Finally, we have also proposed a synthetic access to the dioxaheptane core of natural C15 acetogenins and dioxaoctane, a substructure of the macrolide-polyether antibiotic sorangicin A and aurovertins. Thus, Pd-catalysed cyclisation of appropriate alkenols to tetrahydrofurans and subsequent iodo-cyclisation yielded properly substituted 2,5-dioxabicyclo[2.2.1]heptane and 2,6-dioxabicyclo[3.2.1]octane, respectively with defined stereochemistry and excellent diastereoselectivity. The further synthetic studies toward ocellenynes are currently underway.

© 2014 Palík et al; licensee Beilstein-Institut.
This is an Open Access article under the terms of the Creative Commons Attribution License (http://creativecommons.org/licenses/by/2.0), which permits unrestricted use, distribution, and reproduction in any medium, provided the original work is properly cited.
The license is subject to the Beilstein Journal of Organic Chemistry terms and conditions: (http://www.beilstein-journals.org/bjoc) 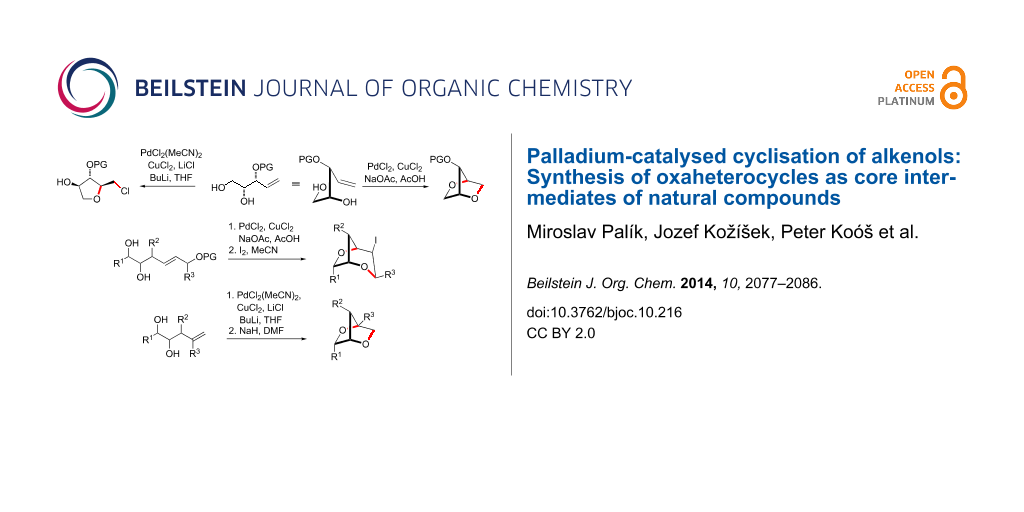