All articles from this author
Rong Wang


All articles from this author
Wei Huang


All articles from this author
Xiao Nian Li


All articles from this author
Rong Jiang


All articles from this author
Ren Xiang Tan


All articles from this author
Hui Ming Ge

An unusual C18 norditerpenoid, aspergiloid I (1), was isolated from the culture broth of Aspergillus sp. YXf3, an endophytic fungus derived from Ginkgo biloba. Its structure was unambiguously established by analysis of HRMS–ESI and spectroscopic data, and the absolute configuration was determined by low-temperature (100 K) single crystal X-ray diffraction with Cu Kα radiation. This compound is structurally characterized by a new carbon skeleton with an unprecedented 6/5/6 tricyclic ring system bearing an α,β-unsaturated spirolactone moiety in ring B, and represents a new subclass of norditerpenoid, the skeleton of which is named aspergilane. The hypothetical biosynthetic pathway for 1 was also proposed. The cytotoxic, antimicrobial, anti-oxidant and enzyme inhibitory activities of 1 were evaluated.

Plant-derived fungi, which have drawn considerable attention from natural product chemists, have been proved to be a rich source of bioactive natural compounds [1,2]. Recently, a wide variety of biologically active and structurally unique metabolites were isolated from these types of microorganisms [3-6], demonstrating their promise as a source of novel and/or bioactive natural products. Our previous chemical investigation of the bioactive secondary metabolites produced by the endophytic Aspergillus sp. YXf3 associated with Ginkgo biloba led to the isolation of new p-terphenyls and novel types of diterpenoids including pimarane-type diterpenoids (sphaeropsidins A and B, aspergiloids D and E), a cleistanthane-type diterpenoid (aspergiloid C), and norcleistanthane-type diterpenoids (asergiloids A, B, and F–H), many of which were reported from this microorganism for the first time [7-9]. Interestingly, sphaeropsidins A and B were also discovered from both Aspergillus chevalieri and phytopathogenic fungus Sphaeropsis sapinea, displaying anti-gram-positive bacterial, antiviral, antiprotozoal and phytotoxic activity [10-12]. We further focused on the fractionation containing the minor terpenoid constituents with characteristic signals for terminal vinyl group detected by 1H NMR from the liquid fermentation broth of Aspergillus sp. YXf3 and isolated a novel norditerpenoid, namely, aspergiloid I (1) (Figure 1). Herein, we report the production, isolation, structure characterization, and biological activity of 1, a rare spirolactone metabolite with a novel carbon skeleton.

A large-scale culture broth of Aspergillus sp. YXf3 was extracted with EtOAc and separated by a combination of column chromatographic methods. A preliminary survey of the fractionation by 1H NMR and LC–MS revealed the presence of the molecule we eventually named aspergiloid I (1), which had a low-resolution mass ([M + Na]+ at m/z 329) spectrum that did not match any previously isolated compounds, prompted us to purify it further. The obtained fermented broth (~45 L) was extracted four times with EtOAc (v/v, 1:1) to afford a brown crude extract (9.1 g). Subsequent fractionation by silica gel column chromatography (CC), octadecylsilyl (ODS) CC, Sephadex LH-20 and semi-preparative reversed-phase HPLC yielded 1 (4.3 mg).

The structure of 1 was further confirmed by a low-temperature (100 K) single-crystal X-ray diffraction experiment, which is shown in Figure 3. As compound 1 has a relatively high percentage of oxygen, it shows enough anomalous dispersion of Cu Kα radiation and allows to determinate the absolute stereochemistry with the Hooft parameter 0.17(15) for 992 Bijvoet pairs by single-crystal X-ray diffraction experiment [13]. Therefore, the absolute configurations of the chiral centers in 1 were established as 5R, 6S, 10R, 11R. This compound is structurally characterized by a new carbon skeleton with an unprecedented 6/5/6 tricyclic ring system bearing an α,β-unsaturated spirolactone moiety in ring B. The skeleton, tentatively named aspergilane, represents a new subclass of norditerpenoids.

The endophytic fungus Aspergillus sp. YXf3 can produce different types of diterpenoids, including pimarane-type diterpenoids (sphaeropsidin A and B, aspergiloid D and E), cleistanthane type-diterpenoid (aspergiloid C), and norcleistanthane-type diterpenoids (aspergiloid A, B, and F–H) [7-9], and the “aspergilane”-type norditerpenoid aspergiloid I. A plausible biogenetic relation is given in Scheme S1 (Supporting Information File 1) for the formation of these diterpenoids. Here the hypothetical pimarane compound 2, the hemiketal lactone ring-opening product of aspergiloid E, was proposed as the most probable biosynthetic intermediate. As shown in Scheme 1, we suggest the biosynthesis of 1 starts from the classical diterpene precursor geranylgeranyl diphosphate [14], and intermediate 2 undergoes decarboxylation to form 3 through Baeyer–Villiger oxidation to form the 7-membered lactone 4, then hydrolyzation, decarboxylation and lactonization to finally give aspergiloid I (1).

In summary, guided by 1H NMR detection, we isolated and characterized a novel norditerpenoid, aspergiloid I (1), from the liquid fermentation broth of the endophytic Aspergillus sp. YXf3 associated with Ginkgo biloba. This compound is structurally characterized by a new carbon skeleton with an unprecedented 6/5/6 tricyclic ring system bearing a α,β-unsaturated spirolactone moiety, and represents a new subclass of norditerpenoid, the skeleton of which is named aspergilane. Chemical investigation of Aspergillus sp. YXf3 revealed it is a pluripotent fungus which can produce different types of novel interesting metabolites, including p-terphenyls, pimarane, cleistanthane, norcleistanthane-type diterpenoids [7], and the “aspergilane”-type norditerpenoid 1. It is possible to propose that 1 is biosynthetically derived from hypothetical intermediate pimarane compound 2, the hemiketal lactone ring-opening product of aspergiloid E. In biological tests, 1 showed no cytotoxic, antimicrobial, anti-oxidant, acetylcholinesterase (AChE), α-glucosidase, and topoisomerase IIα inhibitory activities. In order to perform more biological assays for this unusual norditerpenoid, further scale-up isolation is in progress.

The melting point was measured on a Beijing Taike X-5 stage apparatus and reported without correction. The optical rotation was recorded using a Rudolph Autopol III polarimeter. The UV spectrum was obtained on a Hitachi U-3000 spectrophotometer. The CD spectrum was measured on a JASCO J-810 spectrometer, and the IR spectrum (KBr) was obtained on a Nexus 870 FTIR spectrometer. NMR data were acquired using a Bruker AVANCE III-500 NMR spectrometer at 500 MHz for 1H NMR and 125 MHz for 13C NMR. The chemical shifts were given in δ (ppm) and referenced to the solvent signal (DMSO-d6, δH 2.50, δC 39.5; CDCl3, δH 7.26, δC 77.1) as the internal standard, and coupling constants (J) are reported in Hz. The high resolution mass measurement was conducted on an Agilent 6210 TOF LC–MS spectrometer. Silica gel (200–300 mesh; Qingdao Marine Chemical Factory, Qingdao, China) and Sephadex LH-20 gel (Pharmacia Biotech, Sweden) were used for column chromatography (CC). Semipreparative HPLC was conducted on a Waters ODS (250 × 4.6 mm, 5 μm) on a Hitachi HPLC system consisting of a L-7110 pump (Hitachi) and a L-7400 UV–vis detector (Hitachi). All other chemicals used in this study were of analytical grade.

© 2014 Guo et al; licensee Beilstein-Institut.
This is an Open Access article under the terms of the Creative Commons Attribution License (http://creativecommons.org/licenses/by/2.0), which permits unrestricted use, distribution, and reproduction in any medium, provided the original work is properly cited.
The license is subject to the Beilstein Journal of Organic Chemistry terms and conditions: (http://www.beilstein-journals.org/bjoc) 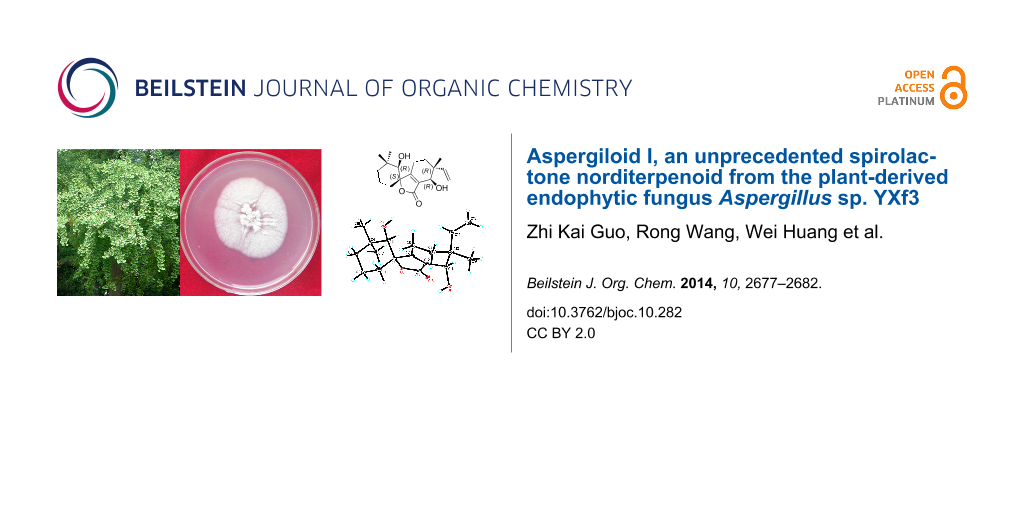