All articles from this author
Jeffrey Buter


All articles from this author
Teris A. van Beek


All articles from this author
Adriaan J. Minnaard

Virgin females of the parasitoid wasp Trichogramma turkestanica produce minute amounts of a sex pheromone, the identity of which has not been fully established. The enantioselective synthesis of a putative component of this pheromone, (6S,8S,10S)-4,6,8,10-tetramethyltrideca-2E,4E-dien-1-ol (2), is reported as a contribution to this identification. Catalytic asymmetric conjugate addition of methylmagnesium bromide and stereoselective Horner–Wadsworth–Emmons olefinations are used as the key steps, and 2 was obtained in 16 steps with an overall yield of 4.4%.

Communication by means of pheromones is common in many animal species. For instance, many insects secrete air-borne volatiles to attract a mate for generating offspring [1,2]. In 2005, one of us reported the isolation and partial characterization of the putative sex pheromone of Trichogramma turkestanica, a parasitoid wasp [3]. These wasps, belonging to the large Trichogrammatidae family, are minute in size (0.5 mm, 8 µg adult weight) as well as morphologically similar making a taxonomic characterization at the species level difficult [4]. A classification on the basis of sex pheromones might help in this respect.

Apart from the above reason and the scientific challenge to elucidate the identity of a complex pheromone at the low nanogram level, an additional reason to study these tiny wasps is their possible application in an environmentally friendly way of crop protection [5]. After copulation, the female wasp deposits the fertilized eggs inside the eggs of a host insect, which is used as a food source for the hatched wasps. Biological studies have revealed that only virgin females are able to trigger casting behavior in males, which has led to the assumption that virgin females of Trichogramma turkestanica produce a sex pheromone. Analysis of headspace volatiles of virgin females, collected via solid-phase microextraction, showed the presence of two sex specific components which were regarded to play an important role in this sex pheromone. After extensive analysis by mass spectrometry and derivatisation studies, the natural products were postulated to be 2,6,8,12-tetrametyltrideca-2,4-diene (A) and 2,6,8,12-tetramethyltrideca-2,4-dien-1-ol (B) (Figure 1) [3]. Stereochemical assignments were lacking. Subsequent synthesis of reference compounds led to revision of the structures, and as a result, the compounds were unambiguously identified to be (2E,4E)-syn,syn-4,6,8,10-tetramethyltrideca-2,4-diene (1) and (2E,4E)-syn,syn-4,6,8,10-tetramethyltrideca-2,4-dien-1-ol (2, Figure 1) [6]. The absolute configurations of the putative pheromone components, however, remained unknown. To solve this problem we undertook the stereoselective synthesis of 2, thereby arbitrarily choosing the all-S configuration.

Nowadays, a number of efficient strategies is available for the synthesis of deoxypropionates [7-15]. Our approach [16] is based on copper-catalyzed asymmetric conjugate addition of methylmagnesium bromide to α,β-unsaturated thioesters and has proven its versatility [17-19]. Arrays of up to eight methyl substituents have been constructed [20]. Starting from 3, the first conjugate addition using (R,SFe)-L1 afforded 4, as expected in high yield and excellent enantiomeric excess (Scheme 1). Reduction with DIBALH, followed by Horner–Wadsworth–Emmons olefination and again asymmetric conjugate addition gave 6 in 77% yield over three steps. To ultimately remove the carbonyl function, we introduced the third methyl ramification in α,β-unsaturated ketone 7, preparation of which was straightforward [21]. Conjugate addition to 7 using the conditions from step A proved clearcut and gave 8 in 82% yield over three steps from 6. Both the enantiomeric excess and the diastereomeric excess of 8 were excellent which is important as the response of insects to their pheromones can be highly sensitive to the stereoisomeric composition.

A number of procedures exist to reduce ketones to their corresponding methylene groups. Initial attempts focused on the formation and subsequent removal of the corresponding hydrazones. Regrettably, the Myers modification of the Wolf–Kishner reduction did not afford detectable amounts of 10 [22]. Also the modification of Caglioti proved only moderately successful with 30% isolated yield of 10 over two steps [23]. As an alternative deoxygenation procedure, we relied on the so-called Mozingo reduction. Although the procedure for dithiane formation has been reported to be catalytic in Lewis acid, we found a linear correlation between the amount of BF3·Et2O used and the conversion (Scheme 2) [24]. The use of 1.2 equiv of BF3·Et2O led to 9 in 84% isolated yield. Reduction of 9 with freshly prepared Raney nickel and subsequent desilylation afforded 10 over two steps in 73% yield.

To introduce the desired E,E-diene present in 2 and 1, we realized that the procedure reported by Markiewicz, comprising a vinylogous Horner–Wadsworth–Emmons olefination, offered in principle a very efficient procedure to obtain dienoate 13 (Scheme 3), and would leave only a single step in the synthesis of 2 [25]. Therefore, reagent 12 was prepared in two steps. After quantitative conversion of 10 into 11 using Ley–Griffith oxidation, its reaction with 12, using LiHMDS as the base, afforded 13 in 75% yield, though as a 1:1 mixture of 2E,4E- and 2E,4Z-isomers. Moreover, the 1H NMR spectra indicated the presence of an impurity, which appeared as a multiplet between 5.00 and 5.45 ppm. Although minimal amounts of 2E,4Z-13 could be isolated, 2E,4E-13 was inseparable from this impurity. We decided to continue the synthesis with impure 13, which was reduced with DIBALH at low temperature to give crude 1 in 96% yield. TLC analysis indicated the presence of two major, separable, products. Purification by flash-column chromatography over either silica gel or neutral aluminium oxide, however, led to rapid degradation of 2. In the process, we were unable to isolate a pure sample of either isomer. This approach was ultimately abandoned, and only delivered the knowledge that 2 is unstable upon purification by column chromatography. This sensitivity to acid has been reported before for similar compounds [26], and can be explained by the readily formed dienyl cation.

We realized that, in order to obtain a pure sample of 2, it was essential to avoid chromatographic purification after the final step. As the reduction of 13 with DIBALH is a clean reaction, affording essentially pure 2 after work-up, the preparation of pure 13 was highly desirable. A stepwise olefination approach was therefore considered.

Wittig reaction of aldehyde 11 with phosphorane 14 to give 15 was carried out first (Scheme 4) [27]. Next to ~60% of the desired product, around 40% of the mass balance consisted of an inseparable impurity. 1H NMR spectroscopy again showed a set of multiplets between 4.95–5.00 ppm. Although repeated recrystallization of commercial reagent 14 reduced the impurity to 6%, pure 15 could not be obtained, not even with freshly prepared 14. Moreover, in none of the successive steps the impurity could be separated and therefore also this approach was abandoned. Although NMR and GC–MS analysis of the mixture gave no conclusive evidence for the nature of the impurity, double bond isomers of 15 could account for the observed 1H NMR signals.

As the Wittig reaction of 11 did afford 15, although with the simultaneous formation of an inseparable side-product, we were curious to see how the analogous Horner–Wadsworth–Emmons olefination towards 15 would perform. Thus, aldehyde 11 was freshly prepared and subjected to the conjugate base of 16 (Scheme 5). This olefination proved to be much faster, but afforded 15 as a 1:1 mixture of E- and Z-isomers as determined by 1H NMR spectroscopy. This is attributed to a destabilizing interaction of the α-methyl moiety of the HWE reagent in the transient four-centered intermediate, leading to a mixture of double bond isomers. The impurity previously observed as a result of the Wittig reaction was not present. In addition, the E- and Z-isomers could be separated using column chromatography affording pure E-15 in 45% yield. Reduction of 15 was achieved using DIBALH, affording allylic alcohol 17 in 90% yield, which in turn was oxidized to aldehyde 18 using Dess–Martin periodinane. Given that the conversion of 18 into 19 using a Wittig reaction had proven to be sluggish, we switched again to a Horner–Wadsworth–Emmons olefination, expecting to observe high E-selectivity. Indeed, 19 was obtained in 64% yield over two steps, as the pure E,E-isomer. Reduction of pure 19 with DIBALH finally afforded 2 in 96% yield after work-up. The compound showed to be identical to the natural product and rac-2 prepared in the accompanying paper [6] on the basis of two GC retention times (polar and nonpolar column) and mass spectrum.

In summary, after two unsuccessful attempts, (E,E,S,S,S)-2 has been obtained in a linear sequence of 16 steps and 4.4% overall yield. As the absolute configuration of natural 2 is yet unknown, comparison of natural 2 with now available synthetic enantiopure and racemic 2 will be the next step. Separation of racemic 2 by chiral GC has up till now shown impossible, however. The preparation of deoxy analogue 1 is currently part of our investigations.

This work was financially supported by The Netherlands Organization for Scientific Research (NWO-CW). Mr. K. Ward of Ward Illustration is acknowledged for providing artwork.

© 2014 Geerdink et al; licensee Beilstein-Institut.
This is an Open Access article under the terms of the Creative Commons Attribution License (http://creativecommons.org/licenses/by/2.0), which permits unrestricted use, distribution, and reproduction in any medium, provided the original work is properly cited.
The license is subject to the Beilstein Journal of Organic Chemistry terms and conditions: (http://www.beilstein-journals.org/bjoc) 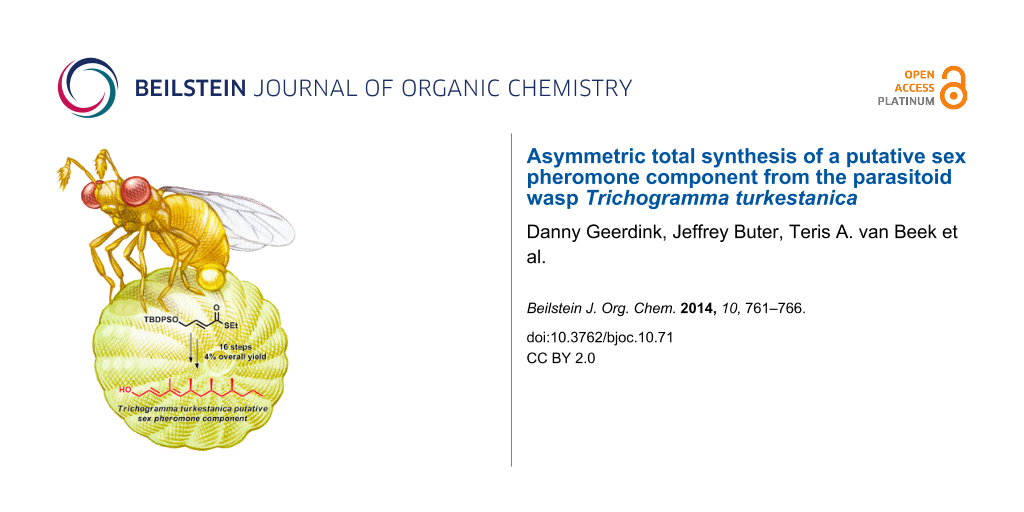