All articles from this author
Keita Arikiyo


All articles from this author
Nagatoshi Nishiwaki

N-Methylated amides (N,4-dimethylbenzamide and N-methylcyclohexanecarboxamide) were systematically subjected to chemical transformations, namely, N-tosylation followed by nucleophilic substitution. The amide function was converted to the corresponding carboxylic acid, esters, amides, aldehyde, and ketone upon treatment with hydroxide, alkoxide, amine, diisobutylaluminium hydride and Grignard reagent, respectively. In these transformations, N-methyl-N-tosylcarboxamides behave like a Weinreb amide. Similarly, N-methyl-5-phenylisoxazole-3-carboxamide was converted into 3-functionalized isoxazole derivatives. Since the amide was prepared by the cycloaddition reaction of ethynylbenzene and N-methylcarbamoylnitrile oxide, the nitrile oxide served as the equivalent of the nitrile oxides bearing a variety of functional groups such as carboxy, alkoxycarbonyl, carbamoyl, acyl and formyl moieties.

Weinreb amide (N-methoxy-N-methylamide) is widely used for the conversion of less reactive amide moieties into other carbonyl functionalities [8,9]. The two oxygen atoms of the methoxy and carbonyl groups coordinate to the organometallic reagents, thereby suppressing further reaction with the obtained aldehyde or ketone. However, this protocol cannot be applied to the conversion of N-methylamides because methoxylation of N-methylamides is hitherto unknown. Thus, we speculated that the introduction of a sulfonyl group would be effective because of its high electron-withdrawing and coordinating abilities, serving as an equivalent of the Weinreb amide. Indeed, the use of N-methyl-3-phenyl-N-tosylbutanamide for this purpose was already reported by Itoh and coworkers [10]. However, a systematic study using simple amides has not yet been performed. In this context, we examined the sulfonylation and chemical conversion of N-methylated aromatic and aliphatic amides, and a similar conversion of N-methyl-5-phenylisoxazole-3-carboxamide (3), which is equal to the generation of variously functionalized nitrile oxides.

At the outset, methanesulfonylation (mesylation) of amides was studied. To a suspension of N,4-dimethylbenzamide (6A) and sodium hydride (2 equiv) in THF, mesyl chloride (7a, 1.3 equiv) was added, and the resultant mixture was stirred at room temperature for 9 h. After acidification, the reaction mixture was extracted with diethyl ether to afford the crude material, from which 32% of N-mesylated product 8Aa [11] was isolated and 61% of 6A was recovered. Thus, the conversion yield of 8Aa was 82% (Table 1, entry 1). On the other hand, the yield of 8Aa was considerably increased (up to 70%) when ethylmagnesium bromide was employed as a base instead of sodium hydride (Table 1, entry 2). However, the instability and gradual decomposition of mesylated product 8Aa by ambient moisture impedes its storage and use as a synthetic reagent. Hence, in the place of the mesyl group, the 4-methylbenzenesulfonyl (tosyl) moiety was employed as the activating group of the amide function. Indeed, tosylated product 8Ab [11] proved to be sufficiently stable under ambient conditions. Despite the considerable efforts for optimizing the reaction conditions, the highest yield obtained for 8Ab was 60%; however, 35% of starting material 6A was recovered, and the conversion yield was 92%. This tosylation method was applied to the aliphatic amide N-methylcyclohexanecarboxamide (6B) to afford 8Bb upon treatment with tosyl chloride (7b) using sodium hydride as a base (Table 1, entry 4). In this case, the use of an excess of 7b increased the yield of 8Bb up to 60% (85% of conversion yield, Table 1, entry 5).

aConversion yields were shown in parentheses; b5 equivalents of 7b were used.

Next, nucleophilic substitutions of tosylated amides 8Ab and 8Bb were investigated (Table 2). Whereas water and methanol did not alter the amide moieties, hydroxide and methoxide converted amides 8Ab and 8Bb into the corresponding carboxylic acids (9a and 10a) and methyl esters (9b and 10b), respectively (Table 2, entries 1–4). In addition, the nucleophilic substitution also proceeded by employing neutral amines. The reaction of 8 with propylamine proceed smoothly, leading to N-propylamides 9c and 10c (Table 2, entries 5 and 6). The substitution reaction was influenced by the bulkiness of the amines. Heating at 120 °C was required for the substitution reaction by sec-butylamine. However, in the case of tert-butylamine, even when the reaction was conducted in a sealed tube at 120 °C, only a small amount of amide was observed (Table 2, entries 7–10). On the other hand, a cyclic secondary amine, pyrrolidine, afforded amides 9f and 10f quantitatively at room temperature (Table 2, entries 11 and 12).

aIntermediately produced 9 or 10 underwent the excess reactions to afford alcohols 11.

When more reactive butyllithium or isopropylmagnesium bromide was used as the nucleophile, the corresponding tertiary alcohols 11g and 11h were obtained in 51% and 58% yields, respectively, whereas ketones 9g and 9h were not detected (Table 2, entries 13 and 14). In the case of an aromatic Grignard reagent, the undesired reaction was suppressed. Although the reaction did not occur at −78 °C, the substitution proceeded successfully at −40 °C, affording ketones 9i and 10i (Table 2, entries 15 and 16). Sodium borohydride also proved to be highly reactive, causing a further addition reaction even at −78 °C to generate the corresponding alcohol 11j (Table 2, entry 17). This disadvantage was overcome by using bulkier diisobutylaluminium hydride (DIBAL) to furnish aldehydes 9j and 10j, although small amounts of alcohol 11j were also detected (Table 2, entries 18 and 19).

In contrast to tosylated amides 8Ab and 8Bb, tosylated N-methyl-5-phenylisoxazole-3-carboxamide 12 exhibited higher reactivity. Upon tosylation under similar conditions 3 did not afford product 12, and isoxazole-3-carboxylic acid 5a, a hydrolyzed product of 12, was observed. This problem was solved by quenching the reaction mixture with ice water instead of just water; yet, 12 was afforded in only 10% yield, and 5a was the main product in 38% yield. These findings imply that during the work-up procedure, further decomposition of 12 by water occurred even at low temperatures because of the higher electron deficiency of the isoxazole ring compared with carbocyclic rings. When, instead of water, less nucleophilic acetic acid was employed for the quench, 12 was isolated in 74% yield and the competitive hydrolysis of 12 was suppressed (6% of 5a).

Although tosylated amide 12 could be isolated, it gradually decomposed under ambient conditions. Hence, the chemical conversion was performed by adding a nucleophile to the mixture of the tosylation reaction, without the isolation of 12 (Table 3). As mentioned above, the use of a hydroxide anion for the hydrolysis was not required, and carboxylic acid 5a was obtained in 81% yield by the addition of only water (Table 3, entry 1). This protocol was applicable to a relatively bulky alcohol to afford isopropyl ester 5k in moderate yield (Table 3, entry 2). Similarly, primary and secondary amines underwent the substitution reaction, leading to 5c–f in good to moderate yields (Table 3, entries 3–6). It was noteworthy that, because of high reactivity of 12 caused by the isoxazole ring [20], the methylamino group could be replaced by a bulky tert-butylamino moiety. Conversion of the N-methylcarbamoyl group to an acyl or formyl group was achieved upon treatment with a Grignard reagent or with DIBAL (Table 3, entries 7 and 8).

The chemical conversion of N-methylamides to versatile carbonyl functions was systematically studied. In this protocol, the tosyl group was found to be effective for the activation of the carbamoyl group and for preventing over-addition by organometallic reagents. Isoxazole-3-carboxamide 3 was successfully converted in a similar fashion. Thus, as shown in Figure 1, nitrile oxide 2 serves as an equivalent of functionalized nitrile oxides 4, thereby improving the synthetic utility of carbamoylnitrile oxide 2.

© 2015 Asahara et al; licensee Beilstein-Institut.
This is an Open Access article under the terms of the Creative Commons Attribution License (http://creativecommons.org/licenses/by/2.0), which permits unrestricted use, distribution, and reproduction in any medium, provided the original work is properly cited.
The license is subject to the Beilstein Journal of Organic Chemistry terms and conditions: (http://www.beilstein-journals.org/bjoc) 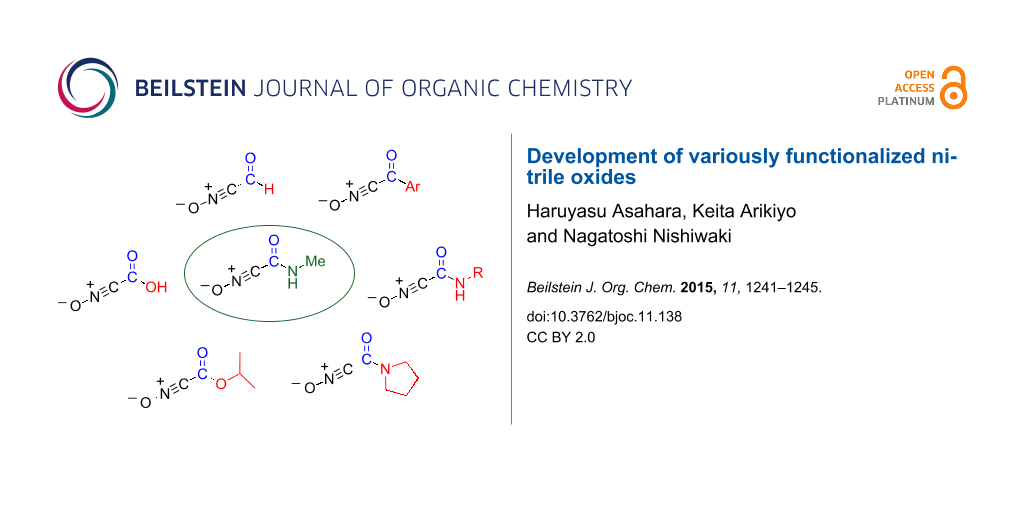