One-pot synthesis of tetracyclic fused imidazo[1,2-a]pyridines via a three-component reaction


All articles from this author
Chuanye Tao


All articles from this author
Taofeng Shao


All articles from this author
Jianxian Gong


All articles from this author
Chao Che

A novel three-component reaction has been developed to assemble biologically and pharmaceutically important tetracyclic fused imidazo[1,2-a]pyridines in a one-pot fashion utilizing readily available 2-aminopyridines, isatins and isocyanides. The three-component coupling proceeds through the Groebke–Blackburn–Bienaymé reaction followed by a retro-aza-ene reaction and subsequent nucleophilic reaction of the in-situ generated imidazo[1,2-a]pyridines bearing an isocyanate functional group.

Multicomponent reactions (MCRs) have attracted considerable attention in organic and medicinal chemistry due to their high efficiency, simple operability, atom economy and unmatched versatility [1-6]. Especially, these reactions serve as an ideal synthetic tool for the assembly of structurally diverse and biologically relevant heterocycles, and thus have been extensively investigated by organic and medicinal chemists to explore lead compounds in drug discovery efforts [7-10].

The imidazo[1,2-a]pyridine scaffold is a pharmaceutically important drug template, and its derivatives display a broad range of biological activities such as antibacterial [11-13], antiviral [14,15], anti-inflammatory [16,17], antitumor [18-20], and anti-HIV [21]. It is found as the core structure in several drugs such as Zolpidem, Alpidem and Zolimidine (approved for treatments of insomnia, anxiety and peptic ulcers, respectively) [22]. As such, the imidazo[1,2-a]pyridine structure represents an intriguing synthetic target, and its further functionalization is leading to polycyclic fused heterocycles that may have interesting biological profiles [23].

Impressively, the imidazo[1,2-a]pyridine scaffolds can be constructed in great diversity by a multicomponent reaction of amidines, aldehydes and isocyanides. This MCR, a variant of the Ugi reaction [24,25], was discovered independently by three groups and is known as the Groebke–Blackburn–Bienaymé (GBB) reaction [26-29]. The reaction involves a formal [4 + 1] cycloaddition of isocyanides [30] and imines, generated from the amidines and aldehydes, allowing straightforward access to diverse imidazo[1,2-x]azines [31-33].

It is noteworthy that there was no report on a ketone-involving GBB reaction, and several attempts to explore the GBB reaction utilizing ketones as carbonyl reactant failed [27,37]. These difficulties could be partially explained in terms of the electronic and steric effect of the ketone involved. More importantly, when a ketone is used in the reaction the formed unstable [4 + 1] cycloaddition adduct could not undergo a [1,3]-alkyl shift. On the other hand the reaction with an aldehyde allows further conversion through a [1,3]-hydride shift to form a stable and aromatic imidazole. Therefore, we envisioned that a ketone-involved reaction could proceed, if the [4 + 1] cycloaddition adduct can further rearrange to form an aromatic imidazole. With this idea in mind, we started to study an isatin-involved GBB reaction [38,39], because the resulting [4 + 1] cycloaddition adduct could further proceed with a retro-aza–ene reaction via a concerted [1,5]-hydride shift.

We first explored the reaction of 2-aminopyridine (2a), isatin (3a) and tert-butyl isocyanide (4a). Under the classical reaction conditions (entry 1, Table 1), the product 1a was isolated only in 4% yield. Performing the reaction under reflux conditions slightly improved the yield to 11%. We next examined solvent effects in this MCR reaction and various solvents were screened, as summarized in Table 1.

We observed that protic solvents with medium polarity can facilitate the reaction by product precipitation from the reaction mixture and n-BuOH proved to be the most suitable solvent in the reaction. Performing the reaction in refluxing n-BuOH in the presence of one equivalent of HClO4 for 8 h, compound 1a was obtained in 30% isolated yield. Other acids including p-toluenesulfonic acid (PTSA), HCl, and HOAc were also screened, and the results indicated that the use of PTSA led to a slightly decreased yield, and weaker acids failed to promote this process. It is worth noting that the reaction proceeded incompletely and significant amounts of isatin (3a) were recovered. When increased amounts (1.35 equiv) of 2-aminopyridine (2a) and tert-butyl isocyanide (4a) were used, the yield of 1a could be further improved to 42%.

Under the optimized reaction conditions, we started to investigate the reaction scope. The MCR of various 2-aminopyridines, isatins and isocyanides proceeded well under the optimized conditions and the combinational synthesis delivered structurally diverse quinazolin-2-one-fused imidazo[1,2-a]pyridines (Figure 1). It was found that the electronic properties of the substituents attached to the isatin and 2-aminopyridine had no obvious effect on the reactivity. When tert-butyl isocyanide (4a) was used, the reaction proceeded equally well with electron-withdrawing or electron-donating substituted isatins and 2-aminopyridines, delivering the desired products 1b–m in 35–55% yield. Similar results were obtained from the reaction with cyclohexyl isocyanide (4b) to give 1n–y. All products were characterized by 1H NMR, 13C NMR, HRMS spectra and the structure of 1o was further confirmed by X-ray diffraction analysis (see Supporting Information File 1 for details).

A possible mechanism for the MCR is proposed in Figure 2. The MCR proceeds through the formation of a protonated imine species from 2-aminopyridine and isatin which then undergoes a formal [4 + 1] cycloaddition with isocyanide to generate a spiro intermediate b. The spiro compound then undergoes a retro-aza–ene reaction via a [1,5]-hydride shift resulting in an aromatic imidazo[1,2-a]pyridine having an isocyanate functional group. A further intramolecular nucleophilic reaction of the imidazole and the newly generated isocyanate provides the final product 1. Noteworthy, the benzodiazepinone-fused imidazo[1,2-a]pyridine 5 was not observed which may be due to the strain of the seven-membered ring.

In conclusion we have developed a GBB-based multicomponent reaction of isatins, 2-animopyridines and isocyanides, which provides a direct and rapid access to diverse tetracylic fused imidazo[1,2-a]pyridines with moderate yields. To the best of our knowledge, the described chemistry represents the first example of the GBB reaction involving ketones, transforming the simple starting materials into complex heterocycles of pharmaceutical relevance in a highly efficient fashion. The developed MCR proceeds through a domino GBB/retro-aza–ene/nucleophilic cyclization process under mild reaction conditions, and its high efficiency and simple operation will make it have potential applications in the compound library synthesis.

Typical procedure for multicomponent reaction. To a solution of isatin (3, 1.0 mmol), 2-aminopyridine (2, 1.35 mmol) and isocyanide (4, 1.35 mmol) in 4 mL of n-butyl alcohol was added HClO4 (1.0 mmol), and the reaction mixture was stirred under refluxing temperature for 8 h. When the reaction mixture had cooled to room temperature, the formed precipitate was collected by filtration, rinsed with ethanol and dried to afford the target compounds 1.

© 2016 Yang et al.; licensee Beilstein-Institut.
This is an Open Access article under the terms of the Creative Commons Attribution License (http://creativecommons.org/licenses/by/2.0), which permits unrestricted use, distribution, and reproduction in any medium, provided the original work is properly cited.
The license is subject to the Beilstein Journal of Organic Chemistry terms and conditions: (http://www.beilstein-journals.org/bjoc) 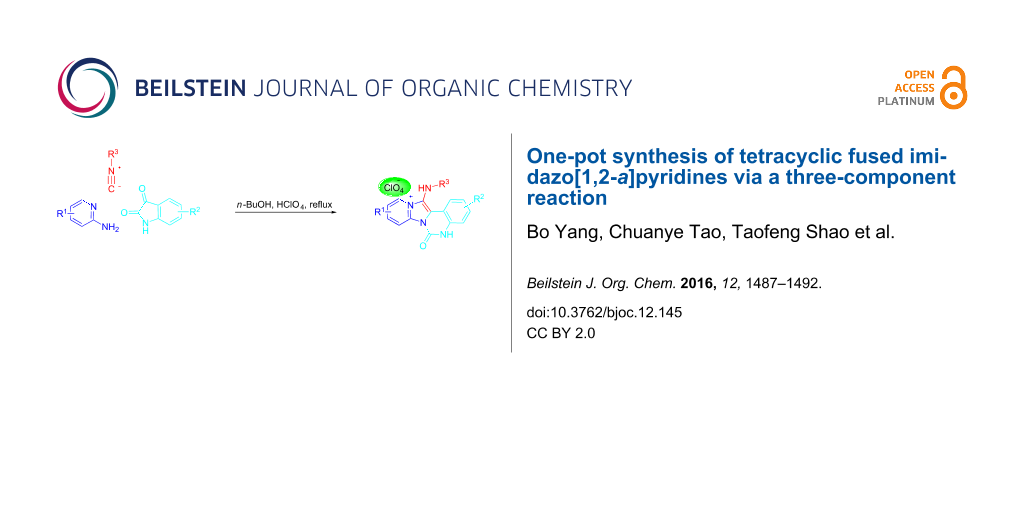