All articles from this author
Yubin Kim


All articles from this author
Dae Young Kim

Chiral binaphthyl-modified squaramide-catalyzed enantioselective addition of diphenyl phosphonate to ketimines derived from isatins has been achieved. This method affords practical and efficient access to chiral 3-amino-3-phosphonyl-substituted oxindole derivatives in high yields with excellent enantioselectivities (up to 99% ee).

α-Aminophosphonate derivatives are important compounds as structural mimics of natural α-amino acids [1-3]. Chiral α-aminophosphonates have been shown a wide range of biological activities including antibacterial [4] and anticancer properties [5], enzyme inhibition [6], peptide mimetic function [7], and herbicidal properties [8]. Since the biological activity of α-aminophosphonate derivatives is dependent upon the chirality of the α-position to the phosphorus atom, asymmetric synthesis of α-aminophosphonates has received considerable attention, and numerous catalytic enantioselective methods using chiral catalysts have been reported [9-13].

Oxindole and its derivatives can be exploited as important synthons to synthesize various alkaloid natural products and biologically active compounds [14-16]. In particular, 3,3-disubstituted oxindoles bearing a quaternary stereogenic center at the C3-position have been reported to be biologically active against a variety of targets [17-19]. Consequently, the asymmetric synthesis of 3,3-disubstituted oxindole derivatives has received significant research attention over the past few decades [20-22]. General approaches for the synthesis of chiral 3-substituted-3-aminooxindole derivatives include the amination of various 3-monosubstituted oxindoles [23-27] and the nucleophilic addition to ketimines derived from isatin derivatives [28-35]. Recently, there were a few reports on the synthesis of chiral 3-amino-3-phosphonyl-substituted oxindole derivatives by the catalytic enantioselective hydrophosphonation of ketimines [36,37]. The previous synthetic procedures suffered from several drawbacks, such as a high catalyst loading, long reaction time, and low temperature required for good enantioselectivity. Thus, new approaches for the organocatalytic enantioselective addition of diphenyl phosphonate to isatin imines are highly desired.

In connection with our ongoing research program on the design and application in asymmetric catalysis of organocatalysts [38-45], we have reported the catalytic asymmetric decarboxylative aldol addition reaction of isatins with benzoylacetic acids catalyzed by chiral binaphthyl-based squaramide [46]. Here we wish to report the enantioselective addition reaction of diphenyl phosphonate to ketimines derived from isatins catalyzed by binaphthyl-modified bifunctional organocatalysts (Figure 1).

The stereochemical outcome in the above addition reaction was rationalized by a proposed stereochemical model. We propose that ketimine 1 is activated by the squaramide moiety through hydrogen bonding, and diphenyl phosphonate (2) is activated by the basic nitrogen atom in the tertiary amine of catalyst III. Then, diphenyl phosphonate (2) attacks the re-face of the carbon in ketimine 1 as shown in Figure 2.

To further demonstrate the synthetic potential of this method, we performed the addition reaction at the gram scale. As shown in Scheme 1, when ketimine 1a was treated with diphenyl phosphonate (2) in the presence of 2.5 mol % of catalyst III at 0 °C, the desired product 3a was obtained in 81% yield and 93% ee (Scheme 1).

In conclusion, we have developed a practical and efficient catalytic enantioselective addition reaction of diphenyl phosphonate (2) with various ketimines 1 derived from isatins. This transformation is catalyzed by binaphthyl-modified squaramide catalyst III with low catalyst loading (2.5 mol %). Chiral 3-amino-3-phosphonyl-substituted oxindole derivatives were obtained in high yields and excellent enantioselectivities were observed (up to 99% ee). This reaction affords valuable and easy access to chiral 3-amino-3-phosphonyl-substituted oxindole derivatives.

General procedure for the enantioselective addition of diphenyl phosphonate (2) to ketimines derived from isatins 1: To a solution of ketimine 1 (0.3 mmol), diphenyl phosphonate (2, 0.45 mmol), and 4 Å molecular sieves (150 mg) in ethyl acetate (3 mL), the catalyst (III, 7.5 μmol) was added at 0 °C. The reaction mixture was stirred for 12–48 h. After completion of the reaction, the resulting solution was concentrated in vacuo and the obtained residue was purified by flash chromatography (EtOAc–hexane) to afford the corresponding adducts 3.

This research was supported by the Soonchunhyang University Research Fund and Basic Science Research Program through the National Research Foundation of Korea (NRF) funded by the Ministry of Science, ICT and Future Planning (2014006224).

© 2016 Jang et al.; licensee Beilstein-Institut.
This is an Open Access article under the terms of the Creative Commons Attribution License (http://creativecommons.org/licenses/by/2.0), which permits unrestricted use, distribution, and reproduction in any medium, provided the original work is properly cited.
The license is subject to the Beilstein Journal of Organic Chemistry terms and conditions: (http://www.beilstein-journals.org/bjoc) 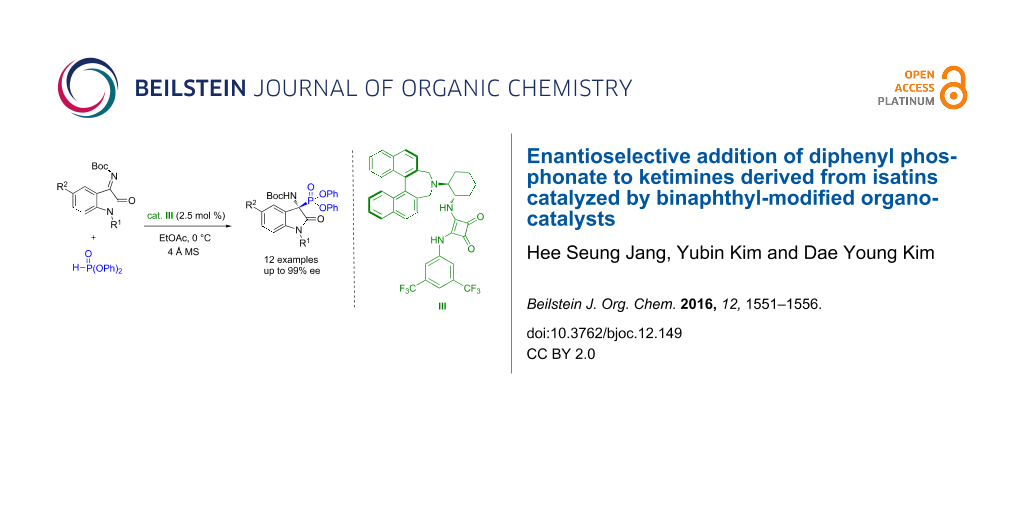