All articles from this author
Tomohiro Michitaka


All articles from this author
Akihito Hashidzume

The product was purified by dialysis against water and treatment with ion-exchange resins, and then recovered by freeze-drying, and characterized by high-performance liquid chromatography (HPLC) using an amino column and a mixed solvent of water and acetonitrile, as can be seen in Figure 2. As reference, this figure also contains an HPLC chart for standard samples, i.e., two-, three-, four-, five-, and six-carbon sugar alcohols (ethylene glycol, glycerol, erythritol, D-arabinitol, and D-mannitol, respectively) (Figure 2a). In Figure 2b–d, the signals at ca. 5 min may be due to impurities, e.g., inorganic salts. As can be seen in Figure 2b, the HPLC chart for the formose reaction in the absence of boronic acid compounds contains a number of signals in a wide range of elution time, indicative for the formation of a complicated mixture. On the other hand, the HPLC chart for SPB indicates a broad signal in the region of smaller carbon numbers (Figure 2c), and the chart for pVPB/NaSS exhibits signals in the region of larger carbon numbers (Figure 2d). These data are suggestive of modest selectivity of the formose reaction in the presence of boronic acid compounds.

The authors would like to express their acknowledgment to Professor Takahiro Sato, Department of Macromolecular Science, Graduate School of Science, Osaka University, for his technical support and fruitful discussion. This work was partly supported by JSPS Kakenhi Grant Numbers JP23550137, JP26288061.

© 2016 Imai et al.; licensee Beilstein-Institut.
This is an Open Access article under the terms of the Creative Commons Attribution License (http://creativecommons.org/licenses/by/4.0), which permits unrestricted use, distribution, and reproduction in any medium, provided the original work is properly cited.
The license is subject to the Beilstein Journal of Organic Chemistry terms and conditions: (http://www.beilstein-journals.org/bjoc) 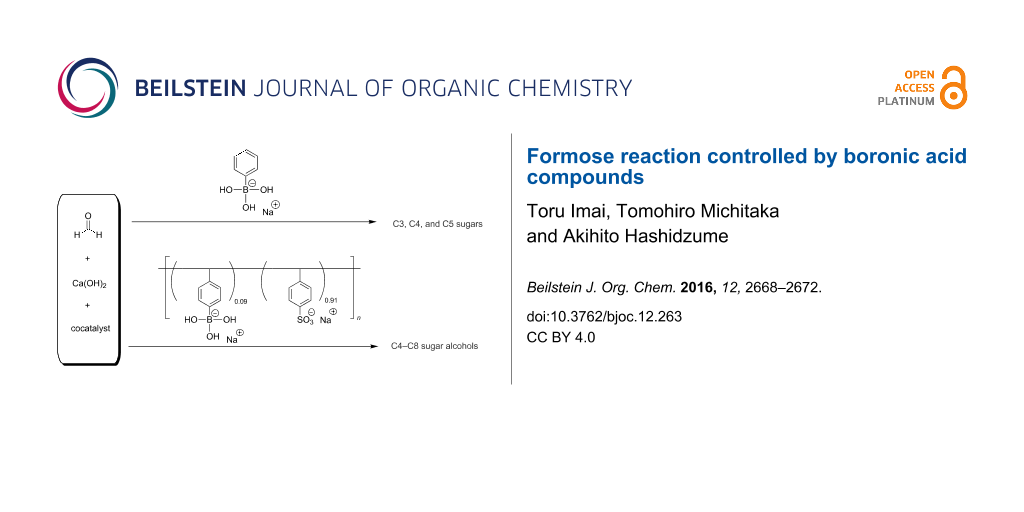