Multicomponent synthesis of spiropyrrolidine analogues derived from vinylindole/indazole by a 1,3-dipolar cycloaddition reaction


All articles from this author
Lokesh Koodlur


All articles from this author
Vijayakumar G. Revanasiddappa


All articles from this author
Subramanya Gopal


All articles from this author
Susmita Kamila

A new series of spiropyrrolidine compounds containing indole/indazole moieties as side chains have been accomplished via a one-pot multicomponent synthesis. The method uses the 1,3-dipolar cycloaddition reaction between N-alkylvinylindole/indazole and azomethine ylides, prepared in situ from cyclic/acyclic amino acids. The 1,3-dipolar cycloaddition proceeds efficiently under thermal conditions to afford the regio- and stereospecific cyclic adducts.

The [3 + 2] cycloaddition between azomethine ylides and olefins/acetylene as dipolarophiles is an important reaction to access a number of novel heterocyclic spiro scaffolds of biological importance [1,2]. The regio- and stereoselective construction of spiro compounds by utilizing the 1,3-dipolar cycloaddition reaction of azomethine ylides has been reported [3-6]. However, unlike the previous reports, the present method is concise and facilitates the one-pot synthesis of multifunctionalized spiranes. The earlier works reveal the use of different reaction conditions to prepare functionalized spiroindane, spiropyrolidine, spiropyrrolizidine and spirooxindole derivatives. Among them, the 1,3-dipolar cycloaddition based route is preferred due to multiple advantages [7-10].

Indole and indazolyl subunits are central to numerous alkaloids and are constituents of many classes of compounds that display a wide range of bioactivities such as antimycobacterial, anti-inflammatory, antihypertensive, anticancer, antidepressant, antidiabetic, antimalarial, antitubercular, anticonvulsant and cardiovascular activities [11-16].

As part of our interest in the exploration of 1,3-dipolar cycloaddition reactions [17] for the synthesis of polycyclic molecules, N-alkylated vinylindoles are applied as dipolarophiles in view of the challenges that still pose in the construction of functionalized spiro compounds. We report herein the facile synthesis of novel spiropyrrolidine compounds through a one-pot three-component reaction involving N-substituted vinylindole/indazole, ninhydrin and sarcosine/L-proline. The present multicomponent reaction (MCR) leads to five-membered spiropyrrolidine derivatives 7 and 8 substituted with indole or indazole moieties, respectively. The synthesis being described is the first on the usage of N-alkylated vinylindole or indazole derivatives.

Our studies started with the synthesis of 5-bromo-N-alkylindole and indazole derivatives 2 that can be obtained from 5-bromoindoles/indazoles (1). The latter compounds were synthesized according to procedures described in the literature [18-20]. The regioisomers of N-alkylated 5-bromoindazoles were isolated by column chromatography using a hexane–ethyl acetate mixture. The resulting 5-bromo-N-alkyl derivatives 2 were then treated with potassium vinyltrifluoroborate and PdCl2(dppf)CH2Cl2 in DMF at 90 °C to afford the vinyl-substituted products 3 in excellent yields (Scheme 1) [21,22].

In the next step, the one-pot three component reaction was carried out by reacting N-alkylvinyl products 3 with azomethine ylide, generated in situ through decarboxylative condensation of ninhydrin (4) and sarcosine (5). The 1,3-dipolar cycloaddition of the ylide with the olefin 3 yielded spiropyrrolidines 7 with regiospecificity (Table 1, entries 1–4). The formation of the azomethine ylide intermediate and a plausible reaction pathway for the formation of the spiranes is depicted following the retrosynthetic strategy in Scheme 2.

The applicability of the cycloaddition reaction was explored first for indole derivatives 7a–d and then extended to the synthesis of indazole analogues 7e–k under similar reaction conditions. Based on the same logic of vinylindole, regioisomers of N-alkylvinylindazole were considered. So, this 1,3-dipolar cycloaddition reaction could be well applied to both derivatives which afforded a range of differentially substituted final products in yields ranging from 60 to 93% (Table 1, entries 1–11). Unfortunately the product 7 with X–R = NCOCH3, Y = N could not be synthesized due to low amounts of the required regioisomer of the N-acylated indazole. In both cases of vinylic indole and indazoles, we have shown that the cyclic adducts were favored with dipoles and highly reactive dipolarophiles (vinylindole and -indazole). The increase in the reactivity could be attributed to the presence of electron-donating groups on the dipolarophile.

Encouraged by the success with the acyclic amino acid sarcosine (5), the reaction was extended to the cyclic amino acid L-proline (6) which was reacted with 3 under the optimized reaction conditions. The corresponding stereo- and regiospecific isomers of spiropyrrolidines 8 were obtained in good yields (Table 1, entries 12–22). The stereochemical assignments for compounds 8 were supported by 2D NMR data which showed NOE interactions between H1 and H2 on the asymmetric carbon atoms correlated to the syn-configuration (Figure 1). Upon irradiation of H1 the NOE enhancement was observed for H3 and H4 and the same was observed by irradiation of the ring-junction proton H2. The regioselectivity of cyclic adducts could be explained by secondary orbital interaction as described in earlier reports [4,23]. All compounds were comprehensively characterized by spectroscopic methods (IR, 1H, 13C NMR and LC–MS). The general procedure for the synthesis of 7a–k and 8a–k including the spectral characterization of the compounds are provided in Supporting Information File 1.

The 1H NMR spectrum of compound 7a (X–R = CH, Y–R = N–CH3) proved the formation of the desired product which showed a characteristic doublet of doublets for the H1 proton at δ 3.99 ppm. The CH2 group adjacent to the pyrrolidine nitrogen appeared as a triplet of doublets (δ 3.42 ppm) and multiplet (δ 3.59 ppm), and the N–CH3 of the pyrrolidine ring as a singlet at δ 2.36 ppm. Further, the structures of 7a and 7f were confirmed by single crystal X-ray diffraction studies and the corresponding ORTEP representations are given in Figure 2.

In conclusion, the present work explores the use of 1,3-dipolar cycloaddition reactions for the regio- and stereospecific synthesis of functionalized spiropyrrolidines through a one-pot multicomponent reaction. This new route involving a vinyl framework gives rise to a wide array of novel compounds that could find use in different areas of chemistry. The advantages of the synthesis described are its ease of execution, short reaction times and diversity of the products synthesized.

Manjunatha K. Narayanarao is grateful to VTU for providing facility to carry out the work. The authors acknowledge Dr. Suchetan P A, UCS, TU for elucidating structures from the single crystal XRD data. We thank Dr. Narendra N, UCS, TU for language correction and proof reading.

© 2016 Narayanarao et al.; licensee Beilstein-Institut.
This is an Open Access article under the terms of the Creative Commons Attribution License (http://creativecommons.org/licenses/by/4.0), which permits unrestricted use, distribution, and reproduction in any medium, provided the original work is properly cited.
The license is subject to the Beilstein Journal of Organic Chemistry terms and conditions: (http://www.beilstein-journals.org/bjoc) 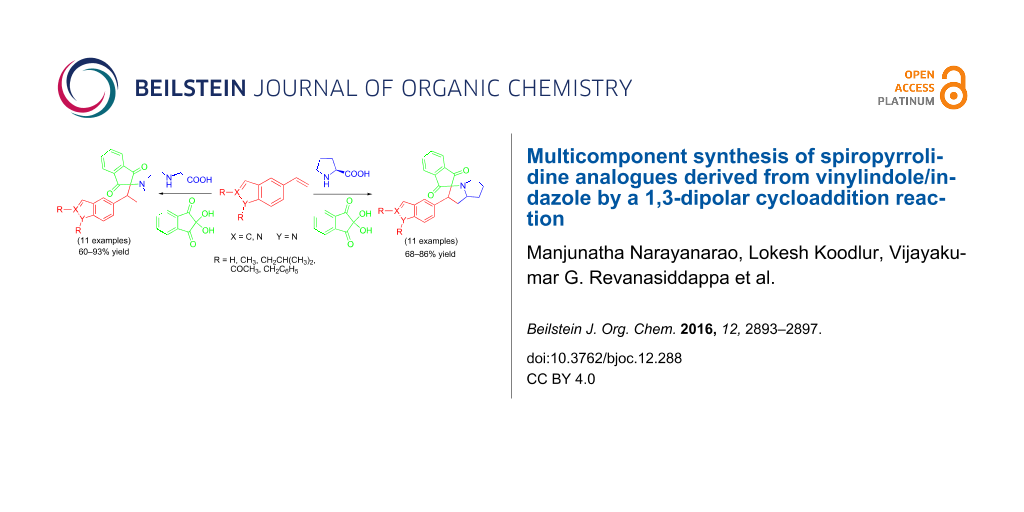