All articles from this author
Andrei V. Budruev

Substituted 2,1-benzisoxazoles display diverse biological activity [1-6] (Figure 1) and are widely used as starting materials for the synthesis of important heterocyclic pharmacophores, such as acridines [7,8], quinolines [9-13] and quinazolines [14-16]. Therefore, the search for new methods leading to 2,1-benzisoxazoles is of great interest.

For the preparative synthesis of 2,1-benzisoxazoles, in addition to the traditional method based on the reductive heterocyclization of ortho-substituted nitro compounds [17-21], two other routes are available: the annulation of nitroso compounds [22,23] and the thermal [24], catalytic [25-27] or photochemical cyclization of aryl azides [28-31].

However, the presence of electron-withdrawing substituents in the 3-, 5- and 7-position of the benzisoxazole dramatically reduces the thermal stability of these compounds. Indeed, these compounds are the most labile representatives of several isomeric oxazoles [32], and they begin to decompose at temperatures slightly above 30 °C, which limits the number of methods for their preparation. Thus the search for new methods for the synthesis of substituted 2,1-benzisoxazoles under mild reaction conditions is required.

Previously, in the investigation of the photochemical cyclization of 2-azidobenzoic acid (1a) using aqueous organic solvent mixtures (Scheme 1), the formation of the cyclization products such as 2,1-benzisoxazole-3(1H)-one (2a) and 2-oxo-3-carboxy-3H-azepine (3a) has been reported [30]. The structure of benzisoxazole 2a was determined by IR, 1H and 13C NMR spectroscopy and by comparison of its mass spectrum with the corresponding spectrum from the NIST library (NIST: 37717). In addition, the structure was confirmed by the alternative synthesis of 2a through the heterocyclization of 2-nitrobenzoic acid [28,29] and X-ray structure analysis [33].

The authors observed that the yields of both 2a and 3a increased with increasing amount of water as nucleophilic solvent in the reaction mixture [30] and obtained a maximum yield of 20% and 50%, respectively, at a water content of 50%. Under these conditions, no formation of the primary amine 4 (a product of the typical triplet nitrene reaction (Scheme 1, intermediate D)) was detected. The replacement of the aprotic solvent dioxane with acetonitrile or THF did not affect the yield of the cyclization products. The photolysis of 1a (Scheme 1, intermediate A) resulted in low yields of 2a because of the competitive formation of reaction products.

In the past, research has been focused on the formation of 2-substituted 3H-azepines 3 as products of the photolysis or thermolysis of aromatic azides [34,35]. The proposed mechanism for their formation was confirmed by identification of the reaction intermediates using low-temperature and time-resolved spectroscopy [36-43]. It is currently believed that azepines are formed through the singlet nitrogen pathway of the reaction (Scheme 1, path: 1 → A → B → C → 3) [44-49].

These nitrenes form benzazirines [19] (Scheme 1, intermediate B) that rearrange into cyclic ketenimines – 1,2-didehydroazepines (Scheme 1, intermediate C) [50]. According to quantum-chemical calculations, the energy barrier of this rearrangement is approximately 40 kJ mol−1 [51], with the limiting step being the formation of B. Therefore, the direction of this reaction solely depends on the conversion of A and formation of C.

Dyall et al. [52,53] have proposed a pericyclic mechanism for the formation of heterocyclic compounds in the pyrolysis of aryl azides with unsaturated ortho-substituents. A possible reaction mechanism for the photochemical formation of 2 (Scheme 1, path: 1 → A → 2) based on the report by Platz et al. [54] includes the benzofuroxan formation by photolysis of 2-azidonitrobenzene through the intermediate singlet nitrene A (Scheme 1) without the formation of other intermediates.

Possibly, similar to the benzofuroxan and 3-amino-6-nitro-2,1-benzisoxazole formation, the carboxylate group of A (Lewis base) donates an electron lone pair to the electron-deficient singlet nitrene fragment of A (Lewis acid) with formation of the N–O bond in 2 through a 1,5-electrocyclization reaction [56,57].

Nonreacted singlet nitrenes A may undergo intersystem crossing (ISC) into the less reactive triplet state (Scheme 1, intermediate D). Although a multiplicity change is a spin-forbidden transition, it can be partially allowed in some cases. According to another report [39], the major products formed from triplet nitrenes are primary amines 4 through hydrogen-atom abstraction [58], secondary amines, 1,2-arylhydrazides and azo compounds 5, which are obtained by recombination of radicals [59]. Moreover, it was shown that yields of primary amines increased in the photolysis reactions of aryl azides without participating ortho-substituents in hydrocarbons as the solvents [39].

In the present research it is demonstrated that using ethanol as the solvent for the photolysis reaction leads to benzisoxazole 2a with an increased yield of 35% and the yield can be further improved to 40% by the addition of a base. Thus, the optimization of the reaction conditions of the base-mediated photochemical synthesis of substituted 2,1-benzisoxazole-3(1H)-ones 2 has been performed.

For optimizing the reaction conditions for the synthesis of 2a by photolysis of 1a, the reaction was performed in different solvents in the absence or presence of a base. As solvents, alcohols and aqueous organic solvent mixtures were tested and alkali metal hydroxides, carbonates or acetates were screened as the base. All reactions were carried out by irradiating the base suspended in the solution of 1a with a mercury low-pressure quartz lamp (254 nm) in a quartz reactor with intensive stirring.

It was found that the yields of 2a after photolysis of 1a substantially increased in the presence of a base. No dependency on the nature of the base could be observed and the yield did not improve further when more than 1 equivalent of the base was used (Table 1). Without irradiation, the reaction did not proceed at all. Replacing EtOH as the solvent with iPrOH did not change the yield of 2a. A chromatographic separation of the reaction mixture obtained by photolysis of 1a in alcohols showed that 2a had formed as the sole product. In this case, neither the formation of 3a nor the corresponding 2-ethoxy- or 2-isopropoxy-substituted azepines could be detected.

The photolysis in a mixture of 1,4-dioxane/water led to a decreased yield of 2a with a simultaneous increase in the yield of 3a. In our opinion, this effect of the solvent or base on the yield of 2a may be explained by the formation of 2a through a heterocyclization of 2-azidobenzoate anions. Therefore, the role of the base in the reaction is the in situ generation of the 2-azidobenzoate anion and the solvent efficiently supports this formation.

The best yield of 2a was obtained by photolysis of 1a in ethanol in the presence of sodium acetate (Table 1, entry 14).

With the optimal conditions at hand, we next investigated the scope of the cyclization using differently substituted 2-azidobenzoic acids (Table 2). The desired products 2b–f were isolated in moderate to high yields (Table 2). Both electron-withdrawing groups (Cl, Br, I) and the electron-donating group (triphenylmethyl) were well-tolerated.

The thermal stability of the products of 2 decreases in the series: 2f > 2a > 2e > 2d > 2c > 2b. Halogen-substituted compounds 2b–e decompose at room temperature within about 5–30 min and the products 2a,f are stable for a couple of hours.

In general, azides with electron-withdrawing groups tend to give higher yields than those substituted with electron-donating groups (2b−e vs 2f, Table 2, entries 2–5 vs entry 6). However, the yield of 2 decreased in the series Cl → Br → I (2b–e, Table 2, entries 2–5), which was probably a manifestation of the internal photochemical heavy-atom effect [60]. The presence of bromo- or iodo-substituents in the substrates 1c–e increases the probability of intersystem crossing for the initially formed singlet nitrenes (Scheme 1, intermediate A) to the triplet state (Scheme 1, intermediate D), thus resulting in decreased yields of the cyclization products 2c–e. In these cases, the formation of the triplet nitrene D should lead to increased yields of primary amines. However, as can be seen from Table 1, the formation of the latter was not observed when ethanol was used as the solvent. To further test the solvent effect on the outcome of the reaction, we repeated the photolysis of azides 1a–f under the optimized conditions but in aqueous dioxane instead of ethanol. As can be seen in Table 3, the photolysis of 1c,d in a 1,4-dioxane/water mixture under these conditions lead to decreased yields of 2c,d and to the formation of azepine 3c and primary amines 4c,d with significant yields. An explanation for the decreased yields observed for isoxazoles 2c,d may be the photo-induced breaking of the C–Br bond that completely changed the way of the reaction. However, this possibility does not explain the formation of primary amines 4c,d.

It should be noted that the photolysis of double ortho-substituted azides (Table 3, entries 2, 4, R2 ≠ H) did not lead to the formation of azepines 3. This confirms the suggestions of previous reports [61,62] about the impossibility of ring expansion of such aryl azides.

Interestingly, under these conditions (Table 3), the yields for 3H-azepine 3a and 3c were determined as 20 and 18%, respectively. We wondered if the yields of these compounds could be improved to allow a preparative synthesis of 3a and 3c. For this reason, the reaction conditions were optimized towards azepines 3a and 3c. According to previously published reports [30,63,64], the yields of the corresponding 3Н-azepines could be increased by increasing the amount of the nucleophile (water) present in the reaction mixture. Thus, we attempted the preparative synthesis of 3a based on our technique described earlier [30]. After irradiating a solution of azide 1a in acetonitrile/water (3:7, v/v) for 24 h in a quartz reactor, a complete conversion of starting compound 1a according to HPLC monitoring was observed. Following work-up and preparative column chromatography azepine 3a could be isolated in 50% yield. For the preparative synthesis of 3c the method had to be slightly modified: In this case the reaction was performed in 1,4-dioxane/water (1:10, v/v) solution and irradiated for 1.5 h in a quartz reactor. After this, the conversion of 1c (according to HPLC monitoring) was found to be 100% and azepine 3c was isolated after preparative column chromatography in 50% yield (see Supporting Information File 1).

As is also shown in Table 3, the high photochemical sensitivity of both the C–I bond and the azide group present in 1e, unlike the others, complicates the synthesis of benzisoxazolone 2e. The photolysis of 1e under these conditions resulted in the formation of several products in low yields. Therefore, the synthesis towards benzisoxazolone 2e was reoptimized (Table 4). It was found that increasing the amount and strength of the base resulted in an increased selectivity and reaction rate. Indeed, using 10 equiv of sodium hydroxide as the base in the reaction resulted in a 51% yield of benzisoxazole 2e at complete photolysis of 1e (Table 4, entry 10). Under these conditions, in addition to compound 2e, the formation of 2a together with some other unidentified products was observed (albeit in low yields). A similar observation has been previously reported by Platz et al. [65].

Based on the results mentioned above and described in the related reports (Scheme 1), a possible reaction mechanism for the formation of 2 was proposed (Scheme 2). At first, 1 produced a salt of 2-azidobenzoic acid 1 (Scheme 2, 1-anion) by neutralization of a base. Next, the salt was decomposed by irradiation and the singlet nitrene A (Scheme 2, intermediate A) was formed. Finally, the electron pair of the carboxylic group (Scheme 2, intermediate A) was joined by 1,5-electrocyclization to the electron-deficient singlet nitrene A with formation of 2-anion (see Scheme 2), which was neutralized by water (path I). Thus, the first path of cyclization of 1 was realized.

Meanwhile a molecular form of 1 produced azepine 3 (path II) by irradiation. The detailed mechanism of the formation of 3 is shown in Scheme 2.

Thus, in the photochemical reaction both ionic and molecular forms of 1 can be used. To increase the yield of 2, it is necessary to shift the equilibrium towards the ionic form 1 (in situ salt formation).

We thank Dr. Vladimir I. Faerman (Lobachevsky State University of Nizhni Novgorod) for the recording of the mass spectra of substituted 2,1-benzisoxazole-3(1H)-ones.

© 2016 Dzhons and Budruev; licensee Beilstein-Institut.
This is an Open Access article under the terms of the Creative Commons Attribution License (http://creativecommons.org/licenses/by/2.0), which permits unrestricted use, distribution, and reproduction in any medium, provided the original work is properly cited.
The license is subject to the Beilstein Journal of Organic Chemistry terms and conditions: (http://www.beilstein-journals.org/bjoc) 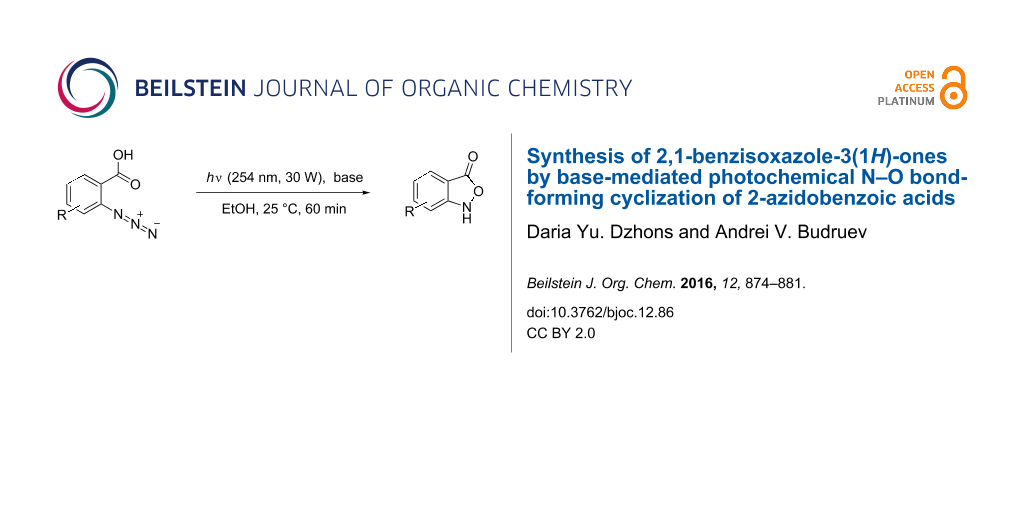