Bifunctional organocatalysts for the asymmetric synthesis of axially chiral benzamides


All articles from this author
Yuuki Wada


All articles from this author
Akira Matsumoto


All articles from this author
Keisuke Asano


All articles from this author
Seijiro Matsubara

Bifunctional organocatalysts have significantly contributed to the field of asymmetric synthesis [1-6]. In these catalysts, (thio)urea and tertiary amino functional groups cooperatively activate a nucleophile and an electrophile simultaneously, in a suitable spatial configuration. Thus, they enable various stereoselective addition reactions to occur. Organocatalysts have also been employed in several asymmetric cyclization reactions via intramolecular hetero-Michael addition [7-16]. In these reactions, multipoint recognition by the catalysts favors the specific conformations of the substrates in the transition state. Several successful results and a recent trend in organocatalytic atroposelective reactions, including enantioselective formation of chiral axes [17-24], dynamic kinetic resolution [25-41], kinetic resolution [42-47], desymmetrization [48-54], de novo annulation [55-61], and point-to-axial chirality transfer [58,59] (for reviews, see references [31,62,63]), motivated us to expand on the utility of this class of small-molecule catalysts. We have recently demonstrated that bifunctional organocatalysts can also be applied to the asymmetric synthesis of axially chiral compounds (biaryls bearing isoquinoline N-oxides or quinolines and phenolic moieties) by translating a specific conformation, recognized by bifunctional organocatalysts, into axial chirality [36,37]. Thus, we assumed that this method could be further applied to the enantioselective synthesis of a range of axially chiral compounds. In this study, we present the enantioselective synthesis of 3-hydroxybenzamides via aromatic electrophilic bromination [28,29]. The 3-hydroxybenzamide substrates comprise both amide and phenolic moieties. These can interact with a hydrogen-bond donor and a hydrogen-bond acceptor, respectively. Such interactions are expected to recognize a specific conformation of the substrate molecule to realize the enantioselective construction of axially chiral benzamides [36,37].

We initiated our investigations using 3-hydroxy-N,N-diisopropylbenzamide (1a) and N-bromoacetamide (NBA, 4a) as a brominating reagent, with 10 mol % quinidine-derived bifunctional catalyst 3a, in toluene, at −40 °C. As expected, the tribrominated product 2a was formed enantioselectively (Table 1, entry 1). Although a lower temperature did not improve the enantioselectivity (Table 1, entry 2), lowering the concentration of the reaction mixture was effective (Table 1, entry 3). The screening of solvents identified ethyl acetate as the most suitable solvent (Table 1, entries 4–7). Other brominating reagents (Figure 1) were also investigated; however, NBA (4a) still afforded the best enantioselective results (Table 1, entries 8–10). In addition, other bifunctional organocatalysts derived from easily available cinchona alkaloids exhibited similarly good enantioselectivities; 3c and 3d afforded the opposite enantiomer of the product (Table 1, entries 11–13, results of further catalyst screening are described in the Supporting Information File 1).

We then investigated substrates bearing other substituents on the amino group (Scheme 1). Dimethyl- and diisobutylamide groups resulted in much lower enantioselectivities (2b and 2c). Substrates bearing cyclohexyl groups or a piperidinyl moiety provided the corresponding products in high yields; however, the enantioselectivities were not as high as that of 2a. The absolute configuration of 2d was determined by X-ray analysis (see the Supporting Information File 1 for details), and the configurations of all other examples were assigned analogously.

To gain insight into the reaction mechanism, the reactions were performed using substrates 1m and 1n, previously monobrominated at the ortho-positions of the rotational axis. Much lower enantioselectivities than that afforded by 1a were observed in both reactions (Scheme 4). In addition, the reaction was also carried out with 1 equiv of NBA (4a). The sole product afforded was 1m and most of the starting material was recovered (see Supporting Information File 1 for details). These results imply that the first bromination, occurring at the ortho-position of the axis (probably at the 2-position), is the enantiodetermining step of the reaction. Moreover, once one of the ortho-positions is brominated, racemization through bond rotation is negligible during further brominations [65]. Indeed, the rotational barrier of substrate 1a, calculated at the B3YLP/6-31G(d) level of theory, is only 7.6 kcal/mol; on the other hand, that of the monobrominated intermediate 1m is 19.0 kcal/mol (Scheme 5). However, this latter value is not high enough to inhibit bond rotation at room temperature. This explains why the reactions must be carried out at such a low temperature (−40 °C) to afford high enantioselectivities. Compound 1o, with both ortho-positions brominated, has a rotational barrier that is high enough to enable the isolation of the optically active form, even at room temperature. Furthermore, it is also important to employ substrates bearing bulky substituents on the nitrogen atom. Such substrates limit the bond rotation about the chiral axis to realize high enantioselectivity (Scheme 1). The rotational barriers of monobrominated compounds 1p and 1q (bearing methyl and isobutyl groups, respectively, on the amide moiety) are lower than that of 1m. Although racemization of 2b, the rotational barrier of which is 22.9 kcal/mol, was observed after a lot of months, it is enough slow to enable the immediate analysis of the reaction selectivity (the decrease of the enantiomeric purity of 2b was negligible after a day).

Furthermore, the reaction of benzamide 5, bearing a protected phenol, was carried out (Scheme 6). It failed to give the corresponding product 6, indicating the significance of multipoint activation involving the phenolic hydroxy group.

In summary, we demonstrated a novel enantioselective synthesis of axially chiral benzamides, using bifunctional organocatalysts, via aromatic electrophilic halogenation. Moderate to good enantioselectiveties were accomplished with various benzamide substrates. These results, along with ones reported in our previous work and other literature [35-38,58,59], verify the utility of bifunctional organocatalysts for application in the synthesis of various axially chiral compounds. Further studies regarding the detailed clarification of the reaction mechanism and application of this method to the construction of other axially chiral structures are currently underway and will be reported in due course.

© 2017 Miyaji et al.; licensee Beilstein-Institut.
This is an Open Access article under the terms of the Creative Commons Attribution License (http://creativecommons.org/licenses/by/4.0), which permits unrestricted use, distribution, and reproduction in any medium, provided the original work is properly cited.
The license is subject to the Beilstein Journal of Organic Chemistry terms and conditions: (http://www.beilstein-journals.org/bjoc) 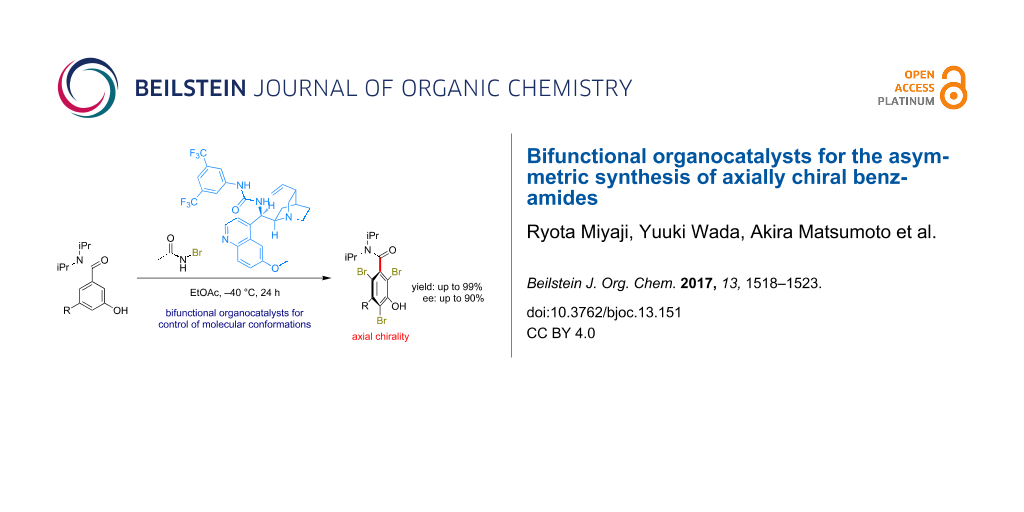