All articles from this author
Bernd Schmidt

8-Allylcoumarins are conveniently accessible through a microwave-promoted tandem Claisen rearrangement/Wittig olefination/cyclization sequence. They serve as a versatile platform for the annellation of five- to seven-membered rings using ring-closing olefin metathesis (RCM). Furano-, pyrano-, oxepino- and azepinocoumarins were synthesized from the same set of precursors using Ru-catalyzed double bond isomerizations and RCM in a defined order. One class of products, pyrano[2,3-f]chromene-2,8-diones, were inaccessible through direct RCM of an acrylate, but became available from the analogous allyl ether via an assisted tandem catalytic RCM/allylic oxidation sequence.

Naturally occurring coumarins and synthetic derivatives have attracted considerable attention, because many of these compounds are pharmacologically active [1-4]. Their activity profiles are quite diverse and range from anticoagulant via anti-infective, anticancer to antineurodegenerative activities [2,3]. The majority of natural coumarins are secondary metabolites isolated from plants [5-7]. A commonly used taxonomy for these natural products (which has been extended to the non-natural analogues) is based on the coumarin structure (Figure 1) [4,8].

It distinguishes between simple coumarins with substituents only at the benzene part (e.g., osthole, a natural product with Ca2+-channel antagonist activity) [9], coumarins with substituents at the pyrone part (e.g., warfarin, a synthetic clinically used anticoagulant) [10], and heteroannellated coumarins, in which a heterocycle is annellated to the benzene ring of the coumarin skeleton. In particular the latter group is often further divided into sections according to ring size (five-membered rings: furanocoumarins; six-membered rings: pyranocoumarins) and location of the annellated ring (linear vs angular). Angelicin (3a, also named isopsoralen), for instance, is an angular furanocoumarin from Psoralea corylifolia [11,12] that is moderately cytotoxic [13] and exhibits anti-oxidative activity [14], but is significantly less phototoxic than the linear isomer psoralen, due to its inability to cross link DNA [15]. This consideration has, for example, led to the development of substituted angelicins rather than psoralens as potential anti-influenza drugs [16]. Seselin (4) is an example of an angular pyranocoumarin found in various plants, e.g., from the family of Rutaceae [17]. Among other bioactivities, the compound itself and some natural and non-natural derivatives induce apoptosis in melanoma HTB-140 cells [18].

Synthetic approaches to substituted coumarins in general and heteroannellated coumarins [19] in particular can start from other naturally occurring coumarins [20] or may involve the construction of the coumarin skeleton. For the latter group of syntheses several classical methods, such as the Perkin condensation, are available, which have been covered in earlier reviews [5,6,8]. Unfavorable reaction conditions, low yields and a sometimes limited scope make the development of alternatives to these established methods necessary. Examples from the past 15 years include transition metal-catalyzed transformations [21-23], solid-phase synthesis directed at combinatorial library design [24] and organocatalytic annellation reactions [25,26].

Sparked by our interest in the development and application of sequential one-pot transformations and motivated by the relevance of prenylated and other substituted coumarins in natural products and medicinal chemistry, we [27-29] and others [30] have investigated a microwave-promoted tandem reaction for the synthesis of 8-substituted coumarins over the past few years. Starting materials are allyl ethers of salicylic aldehydes or ketones 5 and the stable ylide ethyl (triphosphoranylidene)acetate (6), which upon microwave irradiation undergo a tandem Claisen rearrangement/Wittig olefination/cyclization sequence. This sequence was pioneered by the groups of Harwood [31,32] and Mali [33-36], and its Wittig olefination/cyclization part has been employed in the synthesis of various coumarins without alkyl substituents at position 8 [37-39]. In all previous reports conventional heating was used to induce the tandem sequence.

In this contribution we report how 8-allylcoumarins obtained through the microwave-promoted tandem sequence can be elaborated into heteroannellated coumarins that are either natural products or close ring-expanded analogues, using ring-closing olefin metathesis (RCM) reactions. Precedence for the use of RCM [40] in the synthesis and functionalization of coumarins is scarce, considering the vast number of applications olefin metathesis has found [41] and taking into account the high relevance of coumarins. Construction of the coumarin by RCM has been reported by few groups [42-45] and heteroannellations to the coumarin scaffold based on RCM are also limited in number and have mostly not been surveyed systematically [46-53].

For the synthesis of furanocoumarins 3 and their ring-expanded oxepino analogues 11 the 8-allylcoumarins 8 were first O-allylated. The resulting allyl ethers 9 underwent ring-closing metathesis to oxepines 11 smoothly in the presence of second-generation Grubbs’ catalyst A [54] within one hour at 90 °C, except for the 4-phenyl-substituted derivative 9b, which was recovered from the reaction mixture under these conditions. However, compound 9b was successfully cyclized to 11b using catalyst A in dichloromethane at ambient temperature, higher dilution and after prolonged reaction time. For the synthesis of furanocoumarins 3 the allyl ethers 9 were first subjected to a Ru hydride-catalyzed double bond isomerization [55,56] to furnish enol ethers 10 as inseparable mixtures of diastereoisomers. For these reasons a complete structural assignment turned out to be difficult, but the products with a 7-Z-propenyloxy- and an 8-E-propenyl substituent, as shown in Table 2, were in all cases predominant, followed by the E,E-configured products. The ratio of these two isomers was ca. 3:1 for compounds 10a,b,d and ca. 10:1 for 10c with an adjacent coordinating methoxy group. The other two diastereoisomers were present only in trace amounts.

RCM of enol ethers [57,58] 10 under the same conditions used for the synthesis of the oxepino-annellated coumarins 11 gave furanocoumarins 3 in excellent yields (Table 2). Furanocoumarins 3a (angelicin or isopsoralen, Table 2, entry 1) [11,12] and 3c (sphondin, Table 2, entry 3) [59,60] are natural products. They have previously been synthesized from 7-hydroxy-8-iodocoumarins through Sonogashira coupling and cyclization [61] or via Dötz benzannellation [62] of furanyl carbene complexes and acetylenes [63]. Angelicin (3a) was also obtained via RCM of 8-(1-propenyl)-7-vinyloxycoumarin, but the synthesis of this precursor required four steps, starting from umbelliferone, and proceeded only with moderate regioselectivity for the second step [47].

Next, we investigated the synthesis of coumarins with annellated unsaturated lactones starting from the same 8-allylcoumarins 8 (Scheme 1). For the synthesis of oxepin-2-one-annellated coumarins 13 compounds 8 were first converted to the corresponding acrylates 12 with acryloyl chloride (Table 3). RCM of these acrylates turned out to be not straightforward but required some optimization (Table 4).

In particular, a reduced initial substrate concentration of 0.01 M and reaction temperatures of 110 °C (Table 4, entry 6) led to a smooth conversion to the desired oxepin-2-ones 13, whereas ambient or slightly elevated temperatures in CH2Cl2 or toluene as a solvent (Table 4, entries 1, 2 and 5) resulted in incomplete conversions and low yields. Addition of the Lewis acid Ti(OiPr)4, which had previously been reported to prevent the formation of inactive catalyst–substrate chelates [64], inhibited the RCM reaction completely in this case (Table 4, entries 3 and 4). The beneficial effect of low initial substrate concentrations on RCM reactions with acrylates has previously been described [65] and was later systematically investigated by one of us [66].

A possible access to the pyran-2-one-annellated coumarin substitution pattern 15 was investigated starting from acrylate 12d (Scheme 2). The isomerization of the 8-allyl substituent to a prop-1-enyl substituent under the conditions used for the synthesis of precursors 10 (Table 2) stopped at 50% conversion. Higher catalyst loading and an increased reaction temperature, however, resulted in a quantitative conversion to 14d as a mixture of E- and Z-isomers. Although the RCM of similarly substituted acrylates to coumarins was previously described in the literature, this reaction failed completely for the envisaged synthesis of 15d from 14d under various conditions. Initial substrate concentrations varying from 0.01 M to 0.10 M, the solvents dichloromethane and toluene, and reaction temperatures between ambient temperature and 110 °C were tested, but to no avail.

As a method to circumvent notoriously difficult acrylate RCM steps we [45] and others [67] have developed an assisted tandem catalytic [68] RCM/allylic oxidation sequence. Such tandem sequences are characterized by the combination of two mechanistically distinct catalytic reactions in a defined order, which proceed with a single precatalyst that undergoes a transformation in situ upon addition of a suitable reagent, a “chemical trigger” [69]. In the case of the RCM/allylic oxidation sequence tert-butyl hydroperoxide is added after completion of the metathesis reaction, which most likely induces a conversion of the metathesis active Ru–carbene species to a Ru(IV)–oxo species. The latter are known to catalyze allylic and benzylic oxidation reactions through a radical mechanism [70].

To implement this tandem sequence in the synthesis of pyran-2-one-annellated coumarins 15 an isomerization of the 8-allyl substituent to a prop-1-enyl substituent was first required. When 8-allyl-7-hydroxycoumarin (8a) was subjected to the isomerization conditions previously used for the synthesis of furanocoumarin precursors 10 (see Table 2) we observed no conversion. A plausible explanation is the formation of a stable six-membered Ru–O–chelate complex following hydroruthenation, which inhibits a subsequent β-hydride elimination and thus interrupts the catalytic cycle. For these reasons we started from the MOM-protected 8-allylcoumarins 7, which underwent the Ru-hydride catalyzed double bond migration smoothly. The MOM group was cleaved off without isolation of the intermediate products and the required 7-hydroxy-8-(prop-1-enyl)coumarins 16 were isolated in high overall yields and E-selectivities. Allylation of phenols 16 furnished the RCM precursors 17, which underwent the tandem RCM/allylic oxidation sequence to compounds 15 in fair yields (Table 5). All pyran-2-one-annellated coumarins 15 synthesized in the course of this study were previously described in the literature: compound 15a was used to investigate the regioselectivity of [2 + 2]-photocycloadditions [71], compound 15d was included in a comparative investigation into the fluorescence properties of 4-methylcoumarins [72], compounds 15b and 15c were tested for bacteriostatic activity [73] and insect-antifeedant activity [74], respectively. A common denominator of these reports is that a thorough investigation into the spectral and biological properties of these compounds is hampered by unsatisfactory yields and selectivities if classical coumarin syntheses are used. Compound 15a, for instance, was obtained in only 14% yield from umbelliferone and malic acid in a Pechmann synthesis [71].

We concluded our study by investigating the possibility to transfer the syntheses of oxa-annellated coumarins described above to the aza-annellated derivatives. Starting point was the 7-acetamido-substituted coumarin 18 [29], which was first N-allylated to the allylamide 19. Dual double bond migration was accomplished with the Ru–hydride complex used previously and furnished the enamide 20 in high yield and predominantly as the E,E-isomer. In light of previous work by Arisawa et al. [75], who reported a synthesis of indoles by RCM of sterically less encumbered enamides, we investigated the RCM of 20. Unfortunately, no conversion to the indole 22 could be observed under various conditions. Ring-closing metathesis of 19 was, in contrast, successful and furnished the azepinocoumarin 21 in quantitative yield (Scheme 3).

In summary, we demonstrated that annellated coumarins become accessible from appropriately substituted benzene derivatives in few steps, using a microwave-promoted tandem Wittig olefination/Claisen rearrangement/cyclization sequence for the construction of the 8-allylcoumarin scaffold and combinations of double bond isomerization and ring-closing olefin metathesis for the annellation of a second heterocycle. Pyran-2-one-annellated coumarins, which are scarcely available in synthetically useful yields through classical methods, became accessible through a tandem RCM/allylic oxidation sequence.

© 2018 Schultze and Schmidt; licensee Beilstein-Institut.
This is an Open Access article under the terms of the Creative Commons Attribution License (http://creativecommons.org/licenses/by/4.0). Please note that the reuse, redistribution and reproduction in particular requires that the authors and source are credited.
The license is subject to the Beilstein Journal of Organic Chemistry terms and conditions: (https://www.beilstein-journals.org/bjoc) 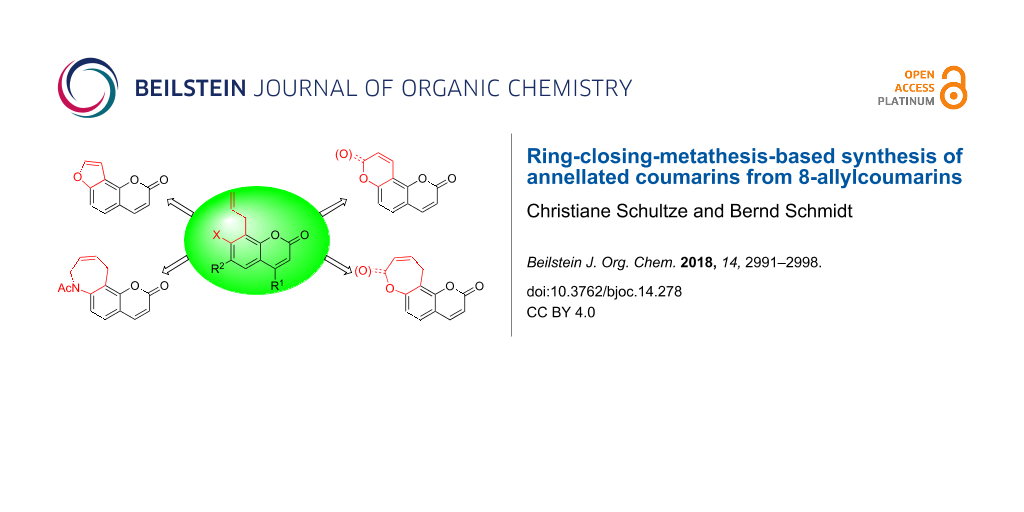