All articles from this author
Yang-Ye Jiang


All articles from this author
Kun Xu


All articles from this author
Bao-Guo Sun


All articles from this author
Cheng-Chu Zeng

An efficient electrocatalytic functionalization of N-arylglycine esters is reported. The protocol proceeds in an undivided cell under constant current conditions employing the simple, cheap and readily available n-Bu4NI as the mediator. In addition, it is demonstrated that the mediated process is superior to the direct electrochemical functionalization.

The oxidative cross dehydrogenative coupling (CDC) of two C–H bonds has emerged as an versatile and powerful strategy for forming new C–C bonds in organic chemistry due to its step and atom economic characteristic as well as avoiding the prefunctionalization of substrates [1-5]. Most of the CDC reactions occur between the benzylic C–H bonds and α-C–H bonds adjacent to a heteroatom (N or O) [6-10]. However, the oxidative C–C formation of secondary amines, especially amino acids has been more important for studying properties and functions of natural and non-natural amino acids [11]. Consequently, efficient and selective construction of C–C bonds of amino acids has always been paid much attention in industrial and academic setting and many advances have been made [12-17]. Li et al. first reported the functionalization of glycine derivatives with malonates using a stoichiometric quantity of Cu(OAc)2 as catalyst and oxidant [12]. Later on, arylation, vinylation and alkynylation of glycine derivatives were also accomplished by the same group (Scheme 1) [13]. Using the Cu(OAc)2/pyrrolidine dual catalysts system, Huang developed the oxidative cross coupling of glycine derivatives with acetone in the presence of TBHP or DDQ as terminal oxidants [14]. The protocol was also extended to reactions with 2-alkylquinoline [15] and phenols [16] using O2 and di-tert-butyl peroxide (DTBP) as oxidant, respectively (Scheme 1). A CuCl-catalyzed oxidative cross coupling of glycine derivatives with indoles has been developed by Hou et al., wherein simple copper salts were used as catalysts and oxygen as the co-oxidant (Scheme 1) [17].

Although much advance has been made for the functionalization of glycine derivatives, most of these strategies mentioned above require stoichiometric or excess amounts of chemical oxidants and transition metal (photo)catalysts. The utilization of stoichiometric or excess amounts of chemical oxidants results in producing waste, which is not atomic economically and environmentally benign. In addition, over-oxidation of products likely occurs in the presence of excess amounts of oxidant. On the other hand, the toxicity of residual traces of transition metal (photo)catalyst in products is also highly concerned. Consequently, metal-free and environmentally friendly oxidative C–C bond formation is highly desired.

Electrochemistry has proved to be an environmentally benign method to achieve the formation of a new chemical bond and a functional group conversion by using electrons as redox reagent rather than terminal chemicals [20-27]. In this context, we have applied simple halide ions as redox catalysts to achieve electrochemical C–H bond functionalization, leading to the formation of new C–C, C–N, C–O and C–S bonds [28-31]. Herein, we report the electrochemical α-C–H functionalization of N-arylglycine esters with C–H nucleophiles using n-Bu4NI as redox catalyst (Scheme 1). The chemistry was performed in an undivided cell under constant current electrolysis. It was observed that n-Bu4NI promotes the reaction dramatically and higher yields of α-functionalized products were afforded compared with the direct electrolysis.

Initially, N-arylglycine ester 1a and C–H nucleophile 1,3,5-trimethoxybenzene (2a) were chosen as model compounds to optimize the electrolytic conditions. As shown in Table 1, when constant current electrolysis (CCE) of 1a and 2a was performed in an undivided cell equipped with 0.1 M LiClO4 in CH3CN in the presence of AcOH using two graphite plates as anode and cathode, the desired product 3aa was isolated in 27% yield (Table 1, entry 1). Replacing CH3CN by other solvents, such as methanol, ethanol or CH2Cl2 failed to improve the reaction efficiency and only trace amounts of 3aa were detected (Table 1, entries 2–4). Further solvent screening disclosed that a 1:2 ratio of CH3CN and CH2Cl2 was better, giving 3aa in 66% yield (Table 1, entries 5 and 6). Exploring the influence of current density on the CDC reaction indicated that 3 mA/cm2 was suitable; lower or higher current density led to a slightly lower yields of 3aa (entry 5, vs entries 7 and 8). It was observed that the additive plays an important role. Among several additives examined, AcOH was proved to be the best, although TFA also gave comparable yields of 3aa (Table 1, entries 5 and 11–13), whereas, it gave only 38% yield of 3aa when the reaction was carried out in the absence of AcOH (Table 1, entry 9). Investigation of the anode proved that graphite was superior to Pt and DSA (Dimensionally Stable Anode, Table 1, entries 14 and 15). Finally, to further improve the reaction efficiency, several halide-containing mediators as redox catalyst were evaluated. To our delight, when n-Bu4NI was utilized as a redox catalyst, the yield of 3aa increased to 81% (Table 1, entries 16–19).

On the basis of the screening of reaction conditions, we could conclude that the electrocatalytic oxidative coupling should be performed in a mixed solution of CH3CN and CH2Cl2 (v/v = 1:2), in the presence of n-Bu4NI (30 mol %) as the mediator, AcOH (50 mol %) as the additive and using graphite plate as electrodes under constant current at 3 mA/cm2. With the optimized conditions in hand, we then investigated the scope of N-arylglycine esters in the reaction with 2a. As a comparison, direct electrochemical coupling of N-arylglycine esters with 2a was also performed. As shown in Scheme 2, substituents including either electron-donating groups (such as methyl and methoxy) or electron-withdrawing groups (Cl, Br and CF3) in the 4-position of the aryl group were tolerated and gave moderate to good yields of 3ba–3ea (61–69% yields), whereas, only 47–58% yields of the desired 3ba–3ea were isolated under the direct electrolytic conditions. However, 3fa was afforded in 39% and 12% yields, respectively, when the electrochemical reaction was performed in the presence or absence of n-Bu4NI as the redox catalyst. The reason for the low yield of 3fa is not clear yet. Steric factors seem to play an important role in the electrochemical CDC reaction of N-arylglycine esters with 2a. When the methyl group was situated at 2- or 3-position of the aniline, instead of in the 4-position, the corresponding products 3ga and 3ha were afforded in 36% and 27% yields, respectively. However, 3ga and 3ha were isolated in 14% and 11% yields, respectively, under the direct electrolytic conditions. In the cases of N-arylglycine methyl ester 1i and N-arylglycine benzyl ester 1j, the electrocatalytic functionalization afforded excellent yields of 3ia (76%) and 3ja (84%), whereas, less efficiency (40–43% yields) was observed without the assistance of n-Bu4NI.

Next, the reactivity of different C–H nucleophiles was also investigated. As shown in Scheme 3, β-keto ester and malonates worked well to afford the desired products 3ab–3ad in moderate yields. In addition, naphthanols were also compatible in this transformation, giving the corresponding products 3ae–3ag in good yields. Notably, when styrene and 1-ethynylbenzene were subjected to reaction with 1a under the standard indirect electrolytic conditions, quinoline-2-carboxylate 3ah was isolated in 64% and 58% yield, respectively. Substituted styrenes and 1-ethynylbenzene were also tolerated well, giving corresponding products 3ai–3aj in 45–50% yields. The formations of 3ah–3aj likely derives from an azo-Diels–Alder reaction of styrene or ethynylbenzene with an imine intermediate, in situ generated from anodic oxidation of 1a, followed by additional oxidation [32-36].

To prove the practicability of the protocol, a scaled-up reaction was also carried out. As illustrated in Scheme 4, when 6 mmol of ethyl p-tolylglycinate (1a) was allowed to react with 1,3,5-trimethoxybenzene (2a) under the standard conditions, adduct 3aa was isolated in a 75% yield, without obvious losing of yield.

To better understand the reaction mechanism, control experiments were performed. As shown in Scheme 5, the anodic oxidation of 1a in the absence of a C–H nucleophile under the standard conditions gives imine intermediate product 5, which was detected by TLC and GC–MS. Moreover, when separated synthesized 5 was subjected to react with 2a, the corresponding product 3aa was isolated in 89% yield. These control experiments indicate that 5 is a possible reaction intermediate.

Based on these control experiments described above, as well as related references [4], a plausible mechanism for the electrocatalytic cross dehydrogenative coupling of N-arylglycine esters 1 with C–H nucleophiles 2 is outlined in Scheme 6. The anodic oxidation of iodide generates the active species I2 or I+. Followed by a homogeneous reaction with N-arylglycine esters, N-iodo intermediate 4 was generated. Eliminating a molecule of HI affords imine intermediate 5. In the presence of acetic acid, the protonated 5-H+ undergoes nucleophilic addition with C–H nucleophiles 2 to give the desired products 3.

In summary, an efficient electrocatalytic cross dehydrogenative coupling of arylglycine esters with C–H nucleophiles has been developed. This protocol employs simple n-Bu4NI as the redox catalyst, avoiding utilization of transition metals and excess amounts of external oxidant, thereby providing an environmentally benign method to the CDC reaction. In addition, it was observed that the electrocatalytic process is superior to the direct electrolysis. Further application of this electrochemical protocol for the formation of new C–C bonds is still on the way in our group.

An undivided cell was equipped with a carbon anode (2 × 2 cm2) and a carbon cathode (2 × 2 cm2) and connected to a DC regulated power supply. To the cell was added N-arylglycine ester (0.5 mmol), C–H nucleophiles (0.6 mmol), n-Bu4NI (0.15 mmol) and 5 mL of 0.1 M LiClO4/CH3CN and 10 mL CH2Cl2. The mixture was electrolyzed using constant current conditions (≈3 mA/cm2) at room temperature under magnetic stirring. When TLC analysis indicated that the electrolysis was complete (witnessed by the disappearance of the N-arylglycine ester), the solvent was removed under reduced pressure. The residue was poured into a saturated aqueous solution of Na2S2O3 and the product was then extracted with DCM (3 × 20 mL), dried over Na2SO4, and concentrated in vacuo. The residue was purified by column chromatography on silica gel using a mixture of petroleum ether/EtOAc (v/v = 3:1) as eluent to afford the desired pure product.

The procedure was identical to that of electrocatalytic synthesis, but without the addition of n-Bu4NI as the mediator.

Learning from B12 enzymes: biomimetic and bioinspired catalysts for eco-friendly organic synthesis

© 2018 Luo et al.; licensee Beilstein-Institut.
This is an Open Access article under the terms of the Creative Commons Attribution License (http://creativecommons.org/licenses/by/4.0), which permits unrestricted use, distribution, and reproduction in any medium, provided the original work is properly cited.
The license is subject to the Beilstein Journal of Organic Chemistry terms and conditions: (https://www.beilstein-journals.org/bjoc) 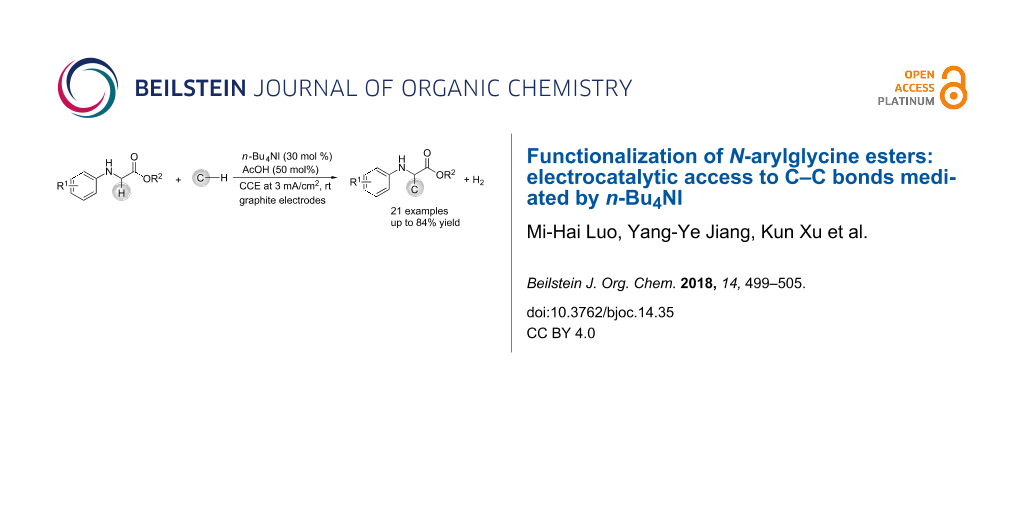