All articles from this author
Ming-Xue Wu


All articles from this author
Dihua Dai


All articles from this author
Zhi Cai


All articles from this author
Yue Wang


All articles from this author
Wenhui Fang


All articles from this author
Yan Wang


All articles from this author
Ying-Wei Yang

Carbon dots (C-dots) as a rising star in fluorescent nanomaterials have attracted wide attention in terms of preparation and application [1-4]. Fluorescent C-dots possess advantages over organic dyes and traditional semiconductor quantum dots due to their high solubility, facile modification, desirable chemical stability, and high resistance to photobleaching. Thus, fluorescent C-dots have been widely applied in the fields of imaging, catalysis, and sensing [5-7]. With the rapid development of fluorescent C-dots, much effort has been made to tune their electrical, optical, and chemical properties via doping and surface modification to offer novel C-dots with attracting properties [8]. It is worth noting that surface modification can not only tune the functional groups of fluorescent C-dots but also endow a variety of functionalities to C-dots and expand the applicability of C-dots [8-10].

Synthetic macrocyclic compounds, especially new macrocyclic arenes, have become one of the research hotspots in supramolecular chemistry [11-14]. Among them pillarenes as a relatively new family of pillar-shaped members discovered a decade ago have played a key role due to their unique conformations, symmetrical structures, superior host–guest properties, supramolecular assembly characteristics, and versatile functionalities [11,15,16]. Carboxylatopillar[5]arene (CP[5]) is one of the most popular functional pillarenes that has been exploited in many research areas, especially in sensing and detection [16-21]. To our best knowledge, only few reports on pillarene-modified C-dots can be found in the literature [19], not to mention their potential applications in ion sensing.

Herein, we prepare fluorescent C-dots, namely CCDs, by linking various CP[5] rings on N-doped C-dots (CN-dots) through covalent bonds formed by EDC-NHS coupling reaction. The comparison of CCDs with single CN-dots without CP[5], revealed that the CCDs exhibit a higher selectivity for Fe3+ detection (Scheme 1). Fe3+ ions play an important role in the living organism and is related to many diseases, thus it is vital to develop effective Fe3+ sensing materials [7,22-24]. Our current strategy suggests that CCDs with excellent selectivity for Fe3+ sensing represent a new type of advanced fluorescent sensing materials.

The sizes and morphologies of CCDs and CN-dots were characterized by transmission electron microscopy (TEM) (Figure 1a). TEM images showed the spherical shape of CCDs with a diameter of 9 nm. For comparison, the shape of CN-dots was quasi-spherical with an average diameter of 7 nm (Figure 1b).

Powder X-ray diffraction (PXRD) patterns (Figure 1e) of CCDs show the characteristic peaks of CN-dots and CP[5], further confirming the successful synthesis of CCDs. Thermogravimetric analysis (TGA, Figure 1f) revealed that the weight loss at 200 °C was due to the pyrolysis of the amino and oxygen groups on the surface of CN-dots, and upon reaching the temperature of 500 °C, CN-dots began to decompose and 61 wt % of its weight was lost until 800 °C. Meanwhile, the weight loss of CCDs reached ca. 35 wt %, indicating that ca. 26 wt % of CP[5] macrocycles were covalently grafted on the surface of CN-dots [17,19].

As shown in Figure 2a, the as-synthesized CN-dots material is soluble in water while the CCDs solid is insoluble. When NaOH was added slowly into the suspension of CCDs, the turbid system became clear, indicating that the CP[5] was successfully anchored on the surface of CN-dots. More intuitively, both the CCDs and the purified CN-dots emit blue fluorescence under the excitation at 365 nm, further illustrating that the CCDs retain the luminous property of CN-dots.

Emission and excitation spectra of CCDs and CN-dots in aqueous solutions are provided in Figure 2b. The maximum emission and excitation wavelength of CCDs are 445 nm and 340 nm, and the maximum emission and excitation wavelength of CN-dots are 475 nm and 365 nm, which coincides with the blue light emission. The obvious blue shift was due to the modification of CP[5], which led to the increase of n–π* transition energy with the formation of new amide bonds [4,25]. The PL quantum yield (QY) of the CCDs aqueous solution was determined to be 4% (Figure 2c), while the CN-dots solution exhibited stronger emission intensity with 7% QY (Figure 2d).

To investigate the application of the as-synthesized fluorescent CCDs in ion sensing, various chlorides of metal ions (Li+, NH4+, Na+, K+, Cu+, Mg2+, Ca2+, Fe2+, Co2+, Ni2+, Cu2+, Zn2+, Cd2+, Sn2+, Hg2+, Cr3+, Fe3+, and Zr4+) were added into the fluorescent CCDs system, respectively. As shown in Figure 3a, Fe3+ could almost completely quench the fluorescence of CCDs among all metal ions at a final concentration of 400 μM, illustrating that CCDs could serve as a potential fluorescence probe for identifying Fe3+. Figure 3b shows the fluorescence intensity change of CN-dots in the presence of metal ions. The experimental results suggested that there are several metals ions that could simultaneously quench the fluorescence of CN-dots, further indicating that CCDs is superior to CN-dots in the selective sensing of Fe3+. In addition, the fluorescence intensity of CCDs decreased gradually with the stepwise addition of Fe3+ in the range of 0–500 μM under the excitation at 340 nm (Figure 3c). As illustrated in Figure 3d, the fluorescence intensity versus the concentration of Fe3+ ions (0–190 μM) established a good linear correlation (R2 = 0.992) and the lowest detection limit (LOD) was determined to be 1.2 μM [16,24,25].

Subsequently, the quenching mechanism of Fe3+ toward CCDs was investigated. As demonstrated in Figure 3e, the UV–vis absorption of Fe3+ overlaid with the emission peak of CCDs, thus, quenching performance can be contributed to the energy transfer between ions and the materials [26]. Meanwhile, the UV–vis absorption peaks of CCDs exhibited no shift and regeneration before and after Fe3+ sensing, indicating that the fluorescence quenching is not resulted from the formation of new composites, and the highly selective sensing towards Fe3+ is also related to the binding of Fe3+ with CP[5] ring (Figure 3f) [24,27,28].

In summary, a promising fluorescent chemical sensing material (CCDs) was synthesized for the first time by covalently attaching CP[5] macrocycles onto the surface of CN-dots via EDC-NHS coupling reaction. Compared with unmodified CN-dots, CCDs demonstrated novel properties after the introduction of CP[5], and showed a higher selective sensing ability for Fe3+ ions. Hopefully, this strategy will inspire the design of new fluorescent chemical sensors toward Fe3+ ions with high selectivity.

© 2019 Gao et al.; licensee Beilstein-Institut.
This is an Open Access article under the terms of the Creative Commons Attribution License (http://creativecommons.org/licenses/by/4.0). Please note that the reuse, redistribution and reproduction in particular requires that the authors and source are credited.
The license is subject to the Beilstein Journal of Organic Chemistry terms and conditions: (https://www.beilstein-journals.org/bjoc) 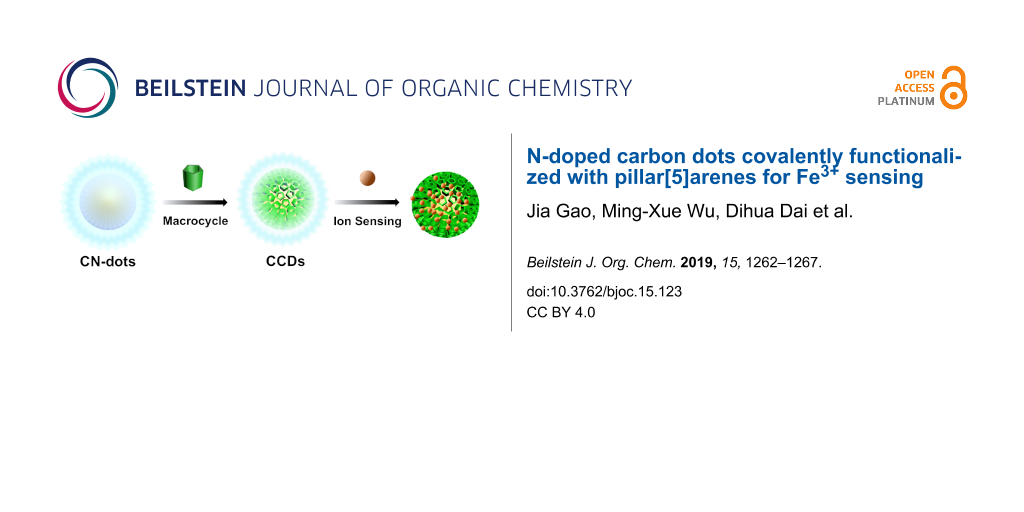