All articles from this author
Yi-Kuan Tu


All articles from this author
Wei Jiang

Two new tetralactam macrocycles with 2,3-dibutoxynaphthalene groups as sidewalls have been synthesized and characterized. The macrocycle containing isophthalamide bridges can bind square-planar chloride coordination complexes of gold(III), platinum(II), and palladium(II) in CDCl3, while the macrocycle with 2,6-pyridine dicarboxamide bridging units cannot. This may be due to the shrunken cavity caused by intramolecular hydrogen bonds in the latter tetralactam macrocycle. The binding of the isophthalamide-based macrocycle is mainly driven by hydrogen bonds and electrostatic interactions. This naphthalene-based macrocycle has similar binding affinities to all the three abovementioned precious metal chloride complexes. This is in contrast to the fact that the tetralactam macrocycle with anthracene as the sidewalls only show good binding affinities to AuCl4−. The superior binding to all three complexes may be due to the conformational diversity of the naphthalene-based macrocycle, which make it conformationally adaptive to maximize the binding affinities. In addition, the macrocycle shows fluorescent quenching when adding the chloride metal complexes in its solution and may be used as a fluorescent sensor for the detection of these coordination complexes.

Macrocyclic receptors are the major workhorses in supramolecular chemistry. Design and synthesis of new macrocyclic receptors with new properties is always attractive but is also challenging [1]. Tetralactam macrocycles with four amide NH residues have been studied for ca. three decades and used in a wide range of fields including molecular recognition, optical sensing, molecular machine etc. [2-13]. The amide N−H groups directed into the cavity could form hydrogen bonds with guests, constituting the main driving forces for molecular recognition. This class of macrocycles, in particular the ones with single arene as sidewalls, have found wide applications in diverse fields: Leigh and co-workers reported many interlocked structures and molecular machines with tetralactam macrocycles [14-16]. The Smith group has used tetralactam macrocycles to encapsulate and stabilize deep-red fluorescent squaraine dyes for biomedical applications [17-20]. By introducing water-soluble groups to tetralactam macrocycles, Davis and co-workers realized selective recognition of glucose in water [21-23]. However, the aromatic sidewalls of these tetralactams are currently limited to benzene, anthracene and their derivatives (Scheme 1). The extension of the sidewalls to naphthalenes should be an important supplement to the previous works, and may even lead to interesting new binding properties.

During the last six years, our group have developed a series of naphthol-based macrocyclic receptors [24-29]. Of them, oxatub[4]arene [30,31] and zorb[4]arene [32,33] show multiple conformations due to the flipping of naphthalenes and thus resulted in a rather wide guest scope. Therefore, we wondered whether multiple conformations would be observed by incorporating the 2,3-dialkoxynaphthalene units into tetralactam macrocycles as the sidewalls. How would this affect their binding affinity and selectivity of the resulting macrocycles?

Synthetic procedures for the preparation of macrocycles 1 and 2 are shown in Scheme 1. The diamine S3 was obtained by reacting the dibromide S2 [32] with hexamethylenetetramine and then treating the product with acid and base. The butoxy groups were introduced to positioning the aminomethyl groups. Under pseudo-high dilution conditions, the diamine S3 and the acid chlorides were added dropwise through a syringe pump to a flask containing Et3N and CH2Cl2 at room temperature. The tetralactam macrocycles 1 and 2 were isolated with yields of 22% and 19%, respectively.

Electrospray ionization (ESI) mass spectra support the isolated products to be the [2 + 2] macrocycles (see Supporting Information File 1). As shown in Figure 1, the 1H NMR spectra are consistent with high-symmetry structures. There are slight differences in the 1H NMR spectra of the two macrocycles. In particular, the NH protons of 2 (7.51 ppm) are located more downfield than that of 1 (6.08 ppm). This should be caused by the intramolecular hydrogen bonds with pyridine nitrogen atoms in 2 [35-38]. These hydrogen bonds make macrocycles 2 more pre-organized. In addition, there exist two conformations for both macrocycles 1 and 2 because the two 2,3-dibutoxynaphthalene moieties can be aligned either in parallel or antiparallel orientation (Scheme 1). These two conformations have different cavities defined by the parallel or antiparallel orientations of the two 2,3-dibutoxynaphthalene moieties; but the same number of peaks in NMR spectra should be observed. Nevertheless, only one set of signals are observed, suggesting that either only one conformation is predominant in solution or the conformational interconversion is fast at the NMR timescale. H3 is diastereotopic and could be split when the conformational interconversion is slow on the NMR timescale, as observed for oxatub[4]arene [30] and zorb[4]arene [32]. When lowering the temperature to 223 K, H3 of 1 was split to two peaks while other peaks become broadened (Figure 1b). This suggests that the conformational interconversion is slow at this temperature and only one conformer is predominant in the solution at 298 K. However, the exact conformer cannot be assigned because the two conformers have the same number of peaks. In contrast, H3 of 2 are broadened even at room temperature, which may be caused by intramolecular hydrogen bonds, but the conformational interconversion should be fast as well for macrocycle 2 at room temperature, which is supported by only one set of sharp signals for the aromatic protons and the non-split and sharp signals of diastereotopic protons at the butyl methylene group next to the oxygen atoms.

A single crystal (Figure 2) of 1, which was suitable for X-ray crystallography, was obtained by slow evaporation of its solution in CH3CN. The crystal structure clearly shows that 1 adopts a flattened chair conformation with the two naphthalenes in parallel orientation. Three of the four NH protons are directed into the cavity, and the fourth one flipped outward and forms a hydrogen bond with the oxygen atom of H2O (H···O distance: 1.97 Å). Two CH3CN molecules were trapped in the cavities by the amide groups through N–H···N hydrogen bonds (H···N distance: 2.21, 2.38 and 2.46 Å). C–H···π interactions (H···π distance: 2.75 and 2.83 Å) between the methyl group of CH3CN and the naphthalene panels of the host are also detected. This suggests that the 2.3-dibutoxynaphthalene tetralactam macrocycle, just like other tetralactam macrocycles, may use hydrogen bonds to recognize guests with hydrogen-bonding acceptors.

Precious metal chloride complexes were found to be complexed by 1. Obvious chemical shifts in the 1H NMR spectra (Figure 3) were observed for H6 and amide NH protons when adding one equivalent of the tetrabutylammonium (TBA+) salt of AuCl4− to the solution of 1 in CDCl3. H6 and NH in the complex undergo downfield shifts when compared with free 1, suggesting that these protons are involved in hydrogen bonds to the guest.

Binding constants of 1 to the precious metal chloride complexes were determined in CDCl3 by 1H NMR titrations (Figures S9−S14, Supporting Information File 1). The data are listed in Table 1. TBA[AuCl4] shows the highest association constant (Ka) with a value of 265 ± 33 M−1. The Ka values for (TBA)2[PtCl4] and (TBA)2[PdCl4] were 189 ± 36 M−1 and 198 ± 15 M−1, respectively. It should be noted that PdCl42− is relatively labile at high concentrations and is in equilibrium with the palladate dimer (Pd2Cl62−) and chloride ions [32,39]. The formation of Pd2Cl62− was supported by an ESI mass spectrum (Figure S15, Supporting Information File 1). Therefore, the association constant for (TBA)2[PdCl4] may, in fact, be caused by the mixture of (TBA)2[PdCl4], TBACl, and (TBA)2[Pd2Cl6]. Tetralactam macrocycles are known to bind chloride ions as well [4,40]. Indeed, 1 is able to bind TBACl with Ka = 90 ± 13 M−1 (Figures S16−S18, Supporting Information File 1). It is interesting that the NH peak broadens and disappears through the addition of TBACl (Figure S19, Supporting Information File 1) and the underlying reason is still unknown. A similar phenomenon was observed for other tetralactam macrocycles [41].

These binding affinities are lower than those of a positively-charged macrocycle [42], but are comparable or superior when compared to other tetralactam macrocycles. With respect to the association constants to TBA[AuCl4] and TBACl, 1 is comparable to the tetralactam macrocycles with anthracene as the sidewalls [34], but is significantly weaker than the one with tetramethylphenyl sidewalls [26]. However, 1 (189 M−1) is superior to these two tetralactam macrocycles (no binding, 20 M−1, respectively) [26] in terms of the binding to (TBA)2[PtCl4]. This may be due to the existence of two conformations of 1, which is conformationally adaptive to the guests. That is, the guest can select the better conformation to maximize the binding affinities, as oxatub[4]arene and zorb[4]arene do [30,32].

In contrast, the addition of these precious metal chloride complexes does not induce any change in the 1H NMR spectrum of 2 (Figure S20, Supporting Information File 1), suggesting 2 not to be a binder of these guests. This is surprising! The only difference between 1 and 2 is that a pyridine moiety is used in 2 in contrast to phenyl group in 1. This leads to further hydrogen bonds between the amide NH protons and the pyridine nitrogen atoms in 2, which pre-organizes the cavity for molecular recognition. How would this affect the binding affinity of 2? To answer this question, molecular modelling was performed.

Only conformer I of 1 was used for the molecular modelling but both conformers are possible. As shown in Figure 5a, AuCl4− can be well accommodated in the cavity of 1. AuCl4− is sandwiched by the two 2,3-dibutoxynaphthalene moieties, and the electron-poor gold centre of AuCl4− may interact with the electron-rich naphthalenes through electrostatic interactions. In addition, hydrogen bonds are detected between the amide protons and H6 of 1 and the chloride ions of the guest (H···Cl distance: 2.48, 2.77 and 2.90 Å). Consequently, the electrostatic interaction and hydrogen bonds are the main driving forces for the host–guest complex. It is noted that the four amide protons are significantly distorted to accommodate AuCl4− in the cavity of 1. In contrast, AuCl4− cannot be encapsulated in the cavity of 2 (Figure 5b). Hydrogen bonds between the pyridine moiety and adjacent amides significantly shrink the cavity [43], and thus the cavity cannot be distorted to fit AuCl4−. Otherwise, a high enthalpic penalty would be paid by destroying the intramolecular hydrogen bonds. This may explain why 2 is not a binder for these precious metal chloride complexes.

© 2019 Wang et al.; licensee Beilstein-Institut.
This is an Open Access article under the terms of the Creative Commons Attribution License (http://creativecommons.org/licenses/by/4.0). Please note that the reuse, redistribution and reproduction in particular requires that the authors and source are credited.
The license is subject to the Beilstein Journal of Organic Chemistry terms and conditions: (https://www.beilstein-journals.org/bjoc) 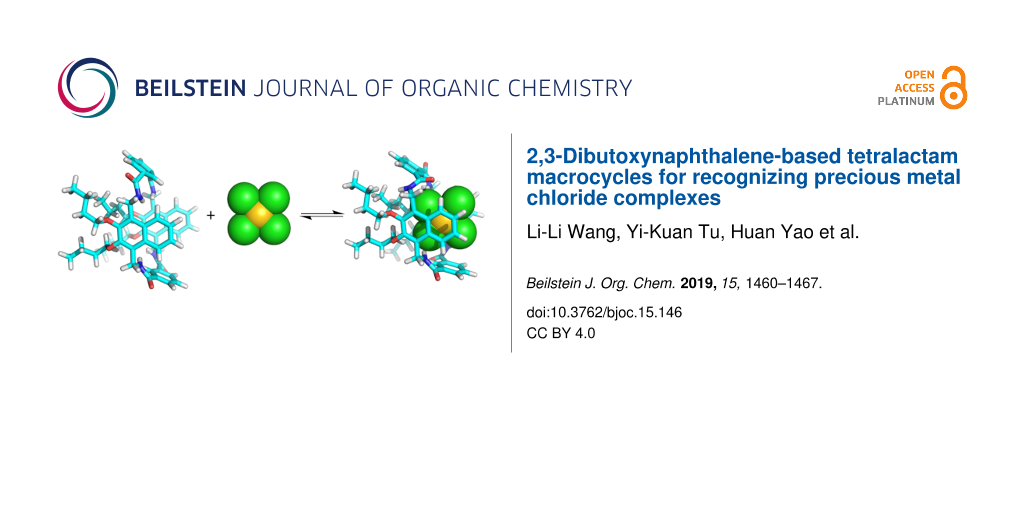