All articles from this author
Qianqian Guo


All articles from this author
Weihua Jiang


All articles from this author
Jiang Liu


All articles from this author
Qi Meng

Berberine is a widely used antimicrobial agent in clinic. However, a high dosage is often required due to its low lipophilicity and bioavailability. The current study explores the structural modifications of berberines with potentially lipophilic aryl groups to address this problem. A series of 15 9-O-aryl-substituted berberines (3a–o) and one 9-O-phenylene-bridged berberine dimer (5) was synthesized by copper-catalyzed cross-coupling of tetrahydroberberrubine and aryl iodides, followed by oxidation with I2.

Berberine (BBR) is a natural alkaloid extracted from ranunculaceae, rutaceae and berberidaceae, which features a tetracyclic isoquinoline core unit. It was widely used as antibacterial agent [1] and has shown myriad therapeutic potencies in tumor cell suppression [2,3] and various chronic disease management [4]. In most cases, the ammonium motif was identified as the key functioning group. However, it leads to lipophobicity of BBR, making it poorly absorbable. Therefore, high oral doses of BBR are often required for an effective treatment, which is not only uneconomic, but may cause adverse effects as well in long term treatment.

The bioavailability, however, could be significantly enhanced through introduction of lipophilic substituents. In this respect, structural modifications with highly lipophilic groups such as long-chain alkyls at C8 [5,6], C9 [7], and C13 [8,9] have been investigated, which all led to considerable improvements in terms of biological activity (Scheme 1, BBR structure). Among all lipophilicity-enhancing strategies, C9-O-Me substitution is the most intensively studied one, which is primarily due to its synthetic convenience. The synthesis starts with pyrolysis of BBR under vacuum at high temperature, during which 9-O-methyl cleavage occurs. The resulting berberrubine (BBRB) then acts as a good precursor to 9-O-substituted derivatives through nucleophilic substitution reactions with alkyl halides (Scheme 1). By this route, not only long-chain alkyl substituents were installed, but also more elaborate motifs such as heterocycles [10-12], glucose [13], nitric oxide [14], and the multidrug-resistance pump inhibitor 5-nitro-2-phenylindole (INF55) [15] have been covalently attached to BBR, further widening its pharmacological spectrum.

Aromatic rings are another family of substituents having high lipophilicity, however, they have been rarely used to functionalize BBR. To the best of our knowledge, only three groups have reported the coupling of aryl groups to the C8 [5,16] and the C12 position [17] of BBR, while 9-O-arylation has not been reported thus far. This is quite surprising given the fact that 9-O-functionalization is well-established. Therefore, to further diversify the BBR structure and to provide more potent drug candidates in the future, we herein report the first synthetic study on 9-O-arylated berberine.

In an analogous manner as described for 9-O-alkylated BBR, the synthesis of 9-O-phenyl BBR 3a was initially attempted by direct cross-coupling of berberrubine (BBRB) with phenyl iodide, using CuI and 1,10-phenanthroline as the pre-catalyst and K2CO3 as the base [18,19]. However, under these reaction conditions not any desired product was formed, and only the starting material BBRB was recovered after 20 h as a red solid, while that of the product should be yellow in color. Variations of reaction conditions (metal source, ligand, temp., etc.) were attempted but to no avail. The lack of reactivity is probably due to the strong negative inductive (−I) effect of the quaternary ammonium unit, which decreases the electron density on the phenoxide, making it only weakly nucleophilic (Scheme 2). Additionally, the zwitterionic structure (I) is in resonance with a neutral ketone structure (II), and natural resonance theory (NRT) analysis has suggested that the ketone structure is the predominant one [20].

To destroy such resonance, the isoquinoline core was thus reduced to tetrahydroisoqinoline 1 by NaBH4 [21]. To our delight, this reduced form of berberrubine smoothly underwent Ullmann-type cross coupling with iodobenzene, leading to the 9-O-Ph product 2a in 65% yield under the aforementioned reaction conditions (Table 1).

To improve the catalytic efficiency, multiple ligands were tested for their activities, among which the κ2-N,O-chelating ligand picolinic acid (L5) was found as the best one, affording 2a in an enhanced yield of 77% (Table 1, entry 5). Both Cu(I) and Cu(II) are able to promote the reaction, however, CuI afforded the best results (Table 1, entry 5 and entries 7–12).

Elevating the temperature to 100 °C leads to 83% product formation (Table 1, entry 17). However, when the reaction temperature was further increased, the analysis of the crude product mixture revealed a complex NMR spectrum, among which one set of the signals is assignable to the 9-O-Ph BBR (3a, vide infra). This suggests a ready oxidation of 2a to BBR derivative 3a probably involving the solvent DMSO under such conditions (Supporting Information File 1, Figure S1). However, changing the solvent to DMF, DMA or 1,4-dioxane did not show any improvement in the yields (Table 1, entries 13–15). Also longer reaction times (48 h) had no significant effect on the product yield (Table 1, entry 20).

Having the optimized reaction conditions in hand, the substrate scope was investigated using various aryl iodides (Scheme 3). Both, electron-rich and electron-deficient aryl iodides afforded the corresponding 9-O-arylated tetrahydroberberines 2a–o in good to decent yields. Also, nitro and ester substituents were well-tolerated under these conditions giving the respective BBR derivatives in high yields. More important, the method allows the incorporation of pharmaceutically highly interesting fluorine-substituted aryl groups into the BBR skeleton.

Interestingly, only a single cross-coupling product was observed with 1,4-diiodobenzene, affording tetrahydroberberine analog 2o in 87% yield. The doubly coupled product 4 was later accessed in 60% yield by repeating the reaction with 2o as the starting material (Scheme 4).

The synthesized compounds 2a–o and 4 are pale yellow solids with good solubility in most organic solvents such as diethyl ether, ethyl acetate, CH2Cl2, CHCl3, CH3CN and MeOH. Besides the appearance of the additional resonances from the aryl groups in the 1H NMR spectra, the disappearance of the singlet at 5.71 ppm characteristic for the O–H signal in 1 also confirmed their generation. The methylene protons are resonating as multiplets in the range of 4.00–2.00 ppm, and they are diastereotopic due to the restricted rotation of the hydroquinolizine rings. Both anti- and syn-rotamers were observed in a ratio of 3:1 in the 1H NMR spectrum of compound 4.

As the quaternary ammonium unit is essential for biological activity, compounds 2a–o and 4 were subsequently converted back to the respective 9-O-arylated berberines and 9-O-phenylene-bridged berberine dimer. Oxidation with DMSO-d6 was first attempted with 2a. It showed good stability at ambient temperature and only 16% conversion to the 9-O-Ph berberine 3a was noted after 72 h of heating at 100 °C (Supporting Information File 1, Figure S2). To promote this process I2 was used as the oxidant and provides the anion at the same time [22]. Following this procedure, the oxidation went to completion within 6 h as indicated by TLC (Scheme 3, Scheme 4), and no substitution on the aromatic backbone was observed as with Br2 [5]. This makes I2 a better oxidant for the oxidation of tetrahydroberberines.

Compounds 3a–o are yellow solids, which are soluble in CH2Cl2, CH3CN, DMSO and MeOH. In contrast, the phenylene-bridged dimer 5 is only sparingly soluble in DMSO and MeOH. The formation of the products was firstly indicated by mass spectrometry (ESIMS), in which the respective [M − I]+ signal was observed as the base peak. The NMR spectra resembled those of BBR, with the methylene protons resonating as triplets in the range of 5.00–3.00 ppm. Only one rotamer was observed in the 1H NMR spectrum of 5.

We have presented the synthesis of unprecedented 9-(O)-aryl-substituted BBR through a copper-catalyzed cross coupling of tetrahydroberberrubine with aryl iodides and subsequent oxidation. The substrate scope is generally broad and various aryl groups have been introduced to the BBR structure. Considering the great abundance of aryl halides, the method allows the preparation of more diverse BBR derivatives in the future. The relevant biological study of the newly synthesized compounds is currently underway in our laboratory.

The authors thank the Natural Science Foundation of the Jiangsu Higher Education Institutions of China (18KJB150002) and the Start-up Foundation of Changzhou University (ZMF 17020129) for financial support.

Molecular basis for the plasticity of aromatic prenyltransferases in hapalindole biosynthesis

© 2019 Teng et al.; licensee Beilstein-Institut.
This is an Open Access article under the terms of the Creative Commons Attribution License (http://creativecommons.org/licenses/by/4.0). Please note that the reuse, redistribution and reproduction in particular requires that the authors and source are credited.
The license is subject to the Beilstein Journal of Organic Chemistry terms and conditions: (https://www.beilstein-journals.org/bjoc) 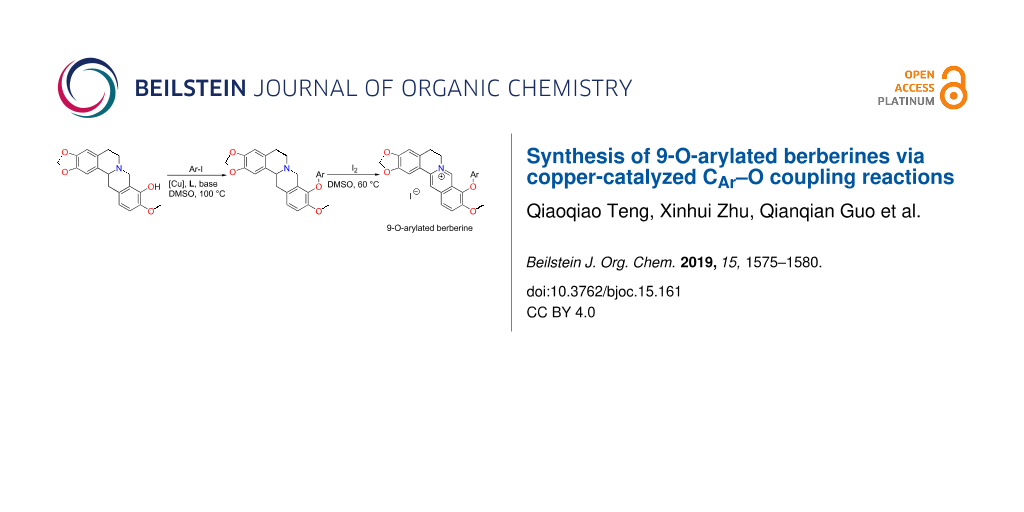