All articles from this author
Wen-Yu Wu


All articles from this author
Shao-Peng Yu


All articles from this author
Tian-Yuan Fan


All articles from this author
Hai-Tao Yu


All articles from this author
Nian-Guang Li


All articles from this author
Zhi-Hao Shi


All articles from this author
Yu-Ping Tang


All articles from this author
Jin-Ao Duan

Phenanthrene is a polycyclic aromatic hydrocarbon which contains three benzene rings. The phenanthrenes can be used as fundamental building blocks or intermediates in the synthesis of complex natural products such as tuberosinone [1], aristolactam Ia [2] and (−)-R-tylophorine [3] (Figure 1). Meanwhile, they also demonstrate a wide range of biological activities including anticancer [4], anti-HIV [5], antibacterial [6], anti-inflammatory [7] and so on.

During the past decades, numerous methods for the preparation of phenanthrene derivatives have been developed. In 2003, Gabriel Tojo’s group reported a base-catalyzed photochemical synthesis of phenanthrene derivatives [8] through intramolecular aromatic coupling (Scheme 1a). Although this method offered an atom-economic and easier strategy for the construction of phenanthrene derivatives, the starting materials in this reaction were difficult to obtain, which limited the development of this approach. Moreover, the ultraviolet light (UV) used in this reaction may cause skin damage to experimenters. Alternatively, alkynes (Scheme 1b) played an important role in the synthesis of phenanthrene scaffolds under transition metal catalysis [9]. However, this protocol required complicated procedures, harsh reaction conditions and was incompatible with many functional groups. Subsequently, facile one-pot approaches had been realized via norbornene-mediated palladium-catalyzed Catellani reaction by Lautens’ group [10] (Scheme 1c). Though this strategy was superior to previous methods in terms of mildness of the reaction conditions, it had a limited substrate scope and relatively low reaction efficiency. Very recently, Fuk Yee Kwong and co-workers (Scheme 1d) developed a straightforward one pot π-extension method using norbornadiene instead of norbornene as directing group to afford the phenanthrenes [11]. However, ortho-haloaryl carboxylic acids employed in this approach had low reactivity, which needed higher reaction temperatures and longer reaction time. Therefore, the development of novel, efficient, and highly functional group tolerant methods for the synthesis of phenanthrene derivatives is still desirable.

Domino reactions such as norbornene-mediated palladium-catalyzed Catellani reactions, which were originally discovered by Catellani in the 1990s [12] and further developed by groups of Catellani and Lautens et al. [13-17], hold great potential for not only settling the sequential reactions in one pot, but also providing access to multisubstituted arenes. In the previous work, we innovatively developed a strategy for the remote C–H alkylation of arenes [18]. Recently, our group also achieved aromatic ketones [19] and 2-alkynyl aromatic ketones [20] successfully through ortho-acylation and ipso-Suzuki coupling or alkynylation for the aryl iodides. In this paper, we developed an efficient domino reaction of aryl iodides with ortho-bromobenzoyl chlorides and norbornadiene leading to phenanthrene derivatives, which could be widely used in the synthesis of vital intermediates for functional materials, pharmaceutical agents and natural products.

We initiated our investigations by evaluating the three-component cross-coupling reaction of 2-iodotoluene (1a), ortho-bromobenzoyl chloride (2a) and norbornadiene, and we optimized the reaction conditions [21]. Firstly, the reaction took place under Pd(PPh3)4/PPh3 as the catalyst, Cs2CO3 as base, and dimethyl formamide (DMF) as solvent at 105 °C for 10 h under N2 atmosphere. Meanwhile, different pallladium species were tested in this reaction system. It was found that Pd(OAc)2 was the most effective palladium catalyst, and the desired product y-1 was obtained in 98% yield (Table 1, entries 1–4). Next, we studied the influence of different ligands in terms of electron-rich, electron-deficient substituents and steric hindrance. The results suggested that different ligands had little effect on this reaction (Table 1, entries 5–7). After a further opimization of various bases, we found that K2CO3 owned a slimilar reactivity as Cs2CO3, while CsOAc with weaker alkalinity showed a lower activity than K2CO3, giving a yield of 62% (Table 1, entries 8 and 9). Besides, organic bases such as Et3N and N,N-diisopropylethylamine (DIPEA) were not effective for this reaction (Table 1, entries 10 and 11). Furthermore, different solvents were then tested, including MeCN, toluene, 1,4-dioxane, tetrahydrofuran (THF), and dimethylacetamide (DMAC), and we found the yield of y-1 was inferior to that done by DMF (Table 1, entries 12–16).

With the optimum reaction conditions in hand (Table 1, entry 3), we expanded the aryl iodide substrates of this reaction (Scheme 2). As a result, it was found that both electron-deficient and electron-rich aryl iodides progressed well in the transformation, and the yield of relevant phenanthrene derivatives y-2–y-15 was quite well. Therefore, it is speculated that the intrinsic electronic properties of aryl iodides makes no difference in this process. The reaction of methoxy-, 2-ethyl-, 2-isopropyl, and 2-phenyliodobenzenes in this procedure afforded the desired products in excellent yields (y-3, y-5, y-6 and y-4), while 1-iodonaphthalene gave a relative low yield of 64% (y-2). Gratifyingly, the reaction of disubstituted iodine substrates proceeded smoothly to deliver targeted compounds y-7, y-8, y-14 and y-15 as well. Introducing electron-withdrawing groups at the ortho-position of aryl iodides, such as nitro, fluorine, chlorine, trifluoromethyl and ester, gave 75–95% yields of the corresponding products y-9–y-13, which were precursors for further transition metal-catalyzed cross-coupling reactions.

To further explore the generality of this reaction, different substituted ortho-bromobenzoyl chlorides were then tested (Scheme 3). The ortho-bromobenzoyl chlorides possessing electron-donating groups, such as methyl and methoxy, were well tolerated in this transformation, and the targeted components were acquired in excellent yields (z-1 and z-2). Notably, ortho-bromobenzoyl chlorides with electron-withdrawing substituents were also compatible substrates, which afforded the corresponding products in 82–87% yield (z-3–z-5). At the same time, a disubstituted substrate was tolerated well to this conversion (z-6). However, the substrates containing ortho-substituents were disadvantageous for this reaction, and none of the desired products was obtained, which indicated that the reaction was strongly influenced by steric hindrance.

Based on the above experimental results and the use of norbornadiene in Catellani reactions followed by retro-Diels–Alder reaction firstly reported by Lautens et al. [22-24], which is mentioned in recent works [11], a proposed mechanism for this domino reaction is presented in Scheme 5. As is commonly considered, the aryl-PdII complex A is formed by oxidative addition of aryl iodide to the Pd0 complex, which is followed by the insertion of norbornadiene to the C–Pd bond of A to produce B. Then, an ortho-C–H activation reaction occurs to B, which offers compound C with a five-membered palladacycle. C undergoes the process of oxidative addition with ortho-bromobenzoyl chloride to give the PdIV intermediate D, and E can be obtained via a reductive elimination reaction. A novel aryl-PdII species F is formed through removing carbon monoxide from E. Ultimately, G will experience immediate retro-Diels–Alder reaction after the catalytic cycle to afford the target product while taking off cyclopentadiene.

In summary, we have developed a novel and efficient protocol which allows us to construct a variety of phenanthrene derivatives starting from aryl iodides, ortho-bromobenzoyl chlorides and norbornadiene in one pot. A wide range of functional groups are compatible with the reaction, including both electron-withdrawing and electron-donating groups. Compared with previous work for the synthesis of the phenanthrenes, this method shows higher reactivity, shorter reaction times, and higher yields of the target compounds. Meanwhile, these flexible approaches to the phenanthrene derivatives would be expected to provide significant references to material chemistry, pharmaceutical agents and natural product synthesis.

All reactions were carried out under a nitrogen atmosphere unless otherwise stated and commercially available reagents were used without further purification. Solvents were purified by standard techniques without special instructions. Thin-layer chromatography (TLC) was performed on GF254 plates, and the spots were monitored through UV light. Flash chromatography was carried out on silica gel 300–400 mesh. 1H and 13C NMR spectra were recorded in CDCl3 at 500 and 126 MHz, respectively, using the solvents as internal standards. High-resolution mass spectra were taken on Waters Synapt MS. The peak patterns are indicated as follows: s, singlet; d, doublet; t, triplet; m, multiplet; q, quartet. The coupling constants (J) are offered in Hz. The ortho-bromobenzoyl chlorides 2a–f were synthesized using the known method [25,26].

General procedure for the preparation of products

A dried round-bottomed flask was charged with aryl iodide (0.30 mmol, 1.0 equiv), ortho-bromobenzoyl chlorides (0.36 mmol, 1.2 equiv), norbornadiene (0.60 mmol, 2.0 equiv), Pd(OAc)2 (5 mol %), triphenylphosphine (12.5 mol %), Cs2CO3 (0.675 mmol, 2.25 equiv), and DMF (4 mL). The mixture was stirred at 105 °C under nitrogen atmosphere for 10 h. After cooling to room temperature, the mixture was diluted with ethyl acetate (5 mL) and brine (10 mL), and extracted with ethyl acetate (3 × 10 mL). The combined organic phase was washed with brine, dried with anhydrous Na2SO4, filtered, and concentrated under reduced pressure. The crude product was purified by column chromatography on silica gel (petroleum ether/ethyl acetate as eluent) to afford the target compounds.

On the mechanism of photocatalytic reactions with eosin Y

Recent advances in synthetic approaches for medicinal chemistry of C-nucleosides

© 2019 Zhong et al.; licensee Beilstein-Institut.
This is an Open Access article under the terms of the Creative Commons Attribution License (http://creativecommons.org/licenses/by/4.0). Please note that the reuse, redistribution and reproduction in particular requires that the authors and source are credited.
The license is subject to the Beilstein Journal of Organic Chemistry terms and conditions: (https://www.beilstein-journals.org/bjoc) 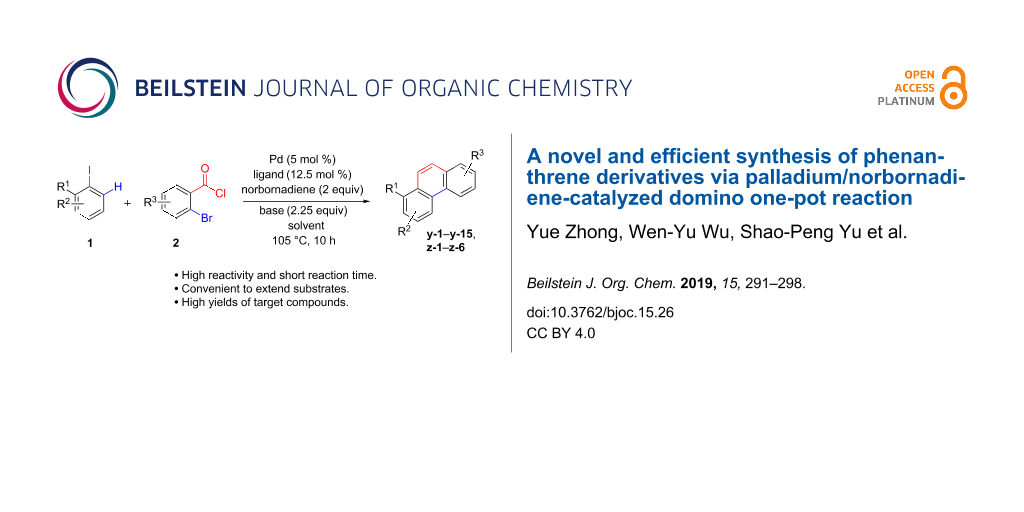