All articles from this author
Mária Mečiarová


All articles from this author
Radovan Šebesta

The Ireland–Claisen rearrangement is a reaction converting allyl esters to γ,δ-unsaturated carboxylic acids. Its key step is a [3,3]-sigmatropic rearrangement of a silyl ketene acetal, which is generated in situ by deprotonation of an allyl ester using a strong base [1-3]. The products of the Ireland–Claisen rearrangement, γ,δ-unsaturated acids, are useful precursors of biologically active compounds and natural products [4-11]. The ready availability of allylic esters, the ability to control the E/Z geometry of enolates as well as its stereospecificity make this transformation synthetically appealing [12,13].

Allyl esters of various carboxylic acids undergo rearrangement as their lithium enolates or silyl ketene acetals and the corresponding acids were isolated in 75–80% yields. Accordingly, the Ireland–Claisen rearrangement of lithium enolates generated from allyl fluoroacetates gave the corresponding α-fluoro-γ,δ-unsaturated acids [14]. The Ireland–Claisen rearrangement of Et3N-solvated enolates showed higher reactivity as well as diastereoselectivity when compared with analogous reactions in THF [15].

The required ester enolates are typically generated using a strong base, such as LDA or similar amides in combination with trialkylsilyl chlorides as silylating agents at low temperature under strictly anhydrous conditions [3,16,17]. An alternative method employs tertiary amines as bases in combination with more reactive silylating agents, such as trialkylsilyl triflates [18,19].

The rearrangement of ester enolates generated by LDA with metal ions bearing bulky cyclopentadienyl ligands proceeded well with yields of up to 90%, and diastereomeric ratios strongly depended on the ligands used [20]. The presence of catalytic amounts of Lewis acids improved the diastereoselectivity and the reaction rate of silyl ketene acetals of (E)-allylic esters [21]. Chiral bromoboranes were used to form boranyl ketene acetals from ester enolates generated from allyl esters with tertiary amines. The geometry of the enolates depended strongly on the solvent and the amine’s structure [22,23].

The decomposition of the enolate is one of the side reactions, which can be suppressed by chelation. The chelation-stabilized enolates are more stable than the corresponding silyl ketene acetals, and they are capable of a direct rearrangement [24]. The chelation-controlled Ireland–Claisen rearrangement of O-protected allylic glycolate esters proceeded with moderate yields and diastereoselectivities of up to 20:1 [25]. An asymmetric ester-enolate-Claisen rearrangement was achieved by using aluminum-chelate-bridged enolates and proceeded with high yields and diastereoselectivities, and ees up to 86% [26]. Rearrangement of allyl esters of glycine derivatives gave under similar conditions amino acids with a quaternary stereocenter on the β-carbon with high yields and excellent diastereo- as well as enantioselectivity [5]. A reductive rearrangement of allyl esters of acrylic acid, catalyzed by in situ-generated copper hydride with diethoxymethylsilane as a reductive agent gave the γ,δ-unsaturated acid with good to excellent diastereoselectivities [27].

Regarding the usefulness of the Ireland–Claisen rearrangement, we tried to optimize its reaction course under mild conditions using various bases, solvents, and hydrogen-bond-donating catalysts. We also present a computational explanation and NMR kinetic study for the inefficient Ireland–Claisen rearrangement under thiourea and squaramide catalysis.

Next, we studied the Ireland–Claisen rearrangement of ester 1c using various tertiary amines as bases. The ester enolate was trapped with Me3SiOTf at −60 °C and allowing the reaction to proceed at room temperature for 24 h. The best yields of acid 3c were achieved with triethylamine (74%) and N-cyclohexyl-N-methylcyclohexanamine (65%, Scheme 2) whereas reactions with trihexylamine and diisopropylethylamine provided the product 3c with lower yields. Rearrangement in the presence of N-methylmorpholine, quinine, and N-methylpyrrolidine afforded only traces of acid 3c and reactions with DBU, DABCO and (S)-1-(pyrrolidin-2-ylmethyl)pyrrolidine did not proceed at all. Of note, the bases used in these Ireland–Claisen rearrangements did not affect the diastereoselectivity and the syn/anti ratio was approximately 70:30 in all cases.

We assumed that hydrogen-bond-donating organocatalysts could activate the enolates or the corresponding silyl ketene acetals or stabilize the corresponding transition states. In addition, chiral organocatalysts could induce diastereo- as well as enantioselectivity. Therefore, we examined the Ireland–Claisen rearrangement of ester 1c in the presence of a range of organocatalysts, including chiral squaramides, thioureas, alkaloids and their derivatives, taddols, binol, chiral phosphoric acid, (S)-proline and its derivatives, amide of tryptophan (Figure 1). These catalysts feature varying steric properties from sterically encumbered, such as C1, C5, C8, or C10, to less demanding ones, e.g., C6, C9 or C11. In addition, the acidity of the hydrogen-bond-donating moiety also ranges over a rather large area from pKa (H2O) 1 for phosphoric acid C10 to pKa (DMSO) 28 of diols C7 and C8. However, neither steric factors, nor the acidity of the H-bond-donor moiety seemed to play a significant role in the Ireland–Claisen rearrangement of 1c. Surprisingly, all catalysts led to a decreased yield of the acid 3c (28–62%) in comparison to 74% yield obtained without any chiral organocatalyst. Further, none of the chiral organocatalysts considerably affected the diastereoselectivity and acid 3c was obtained in racemic form in the presence of either tested chiral organocatalyst. Similar results were obtained with ester 1a. The reaction was tested also in the more polar solvent acetonitrile using catalyst C1, but also in this case no enantioselectivity was observed. Sigmatropic rearrangements proceed via isopolar transition states and, therefore solvent effects are rather small. For this reason and due to the complete lack of enantioselectivity, at this stage, we did not investigate other solvents with the catalysts collected in Figure 1.

In order to gain further insight into the catalyst’s action in the rearrangement, we have studied the effect of catalyst loading in the reaction of ester 1c with squaramide C1. The reaction with Et3N as a base and Me3SiOTf without any chiral organocatalyst afforded acid 3c with 74% yield. Repeating the reaction in the presence of squaramide C1 (5 mol %) lowered the yield from 74 to 37%. A similar yield (35%) was achieved with 10 mol % of C1 (Table 3, entries 1–3) and further increasing the catalyst loading to 20 and 30 mol % diminished the product yield even more (26 and 21%, respectively; Table 3, entries 4 and 5). Ultimately, one equivalent of squaramide C1 completely stopped the reaction (Table 3, entry 6).

aBoth diastereomers were obtained as a racemic mixture. bReaction carried out in the presence of C6 (10 mol %).

The Ireland–Claisen rearrangement of cinnamyl isobutyrate (1d) gave under solvent-free conditions only 17% of the acid 3d and the analogous reaction in CpOMe afforded the acid in 5% yield. When cinnamyl butyrate (1e) was used as a starting material, product 3e was obtained in a yield of 60% (Scheme 3).

To gain further insights into the organocatalysts effect on the Ireland–Claisen rearrangement, we have performed quantum-chemical calculations employing long-range corrected hybrid density ωB97X-D functional [42]. This dispersion-corrected functional displays very balanced overall performances and has demonstrated excellent treatment of noncovalent interactions [43], which are very important in our studied system. For this, we have compared the uncatalyzed Ireland–Claisen rearrangement with three hydrogen-bond-catalyzed reactions. As model H-bonding catalysts, we selected diphenylthiourea, Schreiner thiourea, and the corresponding squaramide with bis(trifluoromethyl)phenyl groups. We have evaluated both the (E)- and (Z)-silyl ketene acetal 2c derived from 1c as starting material for the reaction. The activation barrier for the uncatalyzed reaction of (E)-silyl ketene acetal was 98.5 kJ·mol−1, and for (Z)-silyl ketene acetal 88.7 kJ·mol−1 (Figure 2). Charges on the allylic oxygen in the reaction transition states are only slightly more negative than in the starting acetal silyl ketenes. It means that transition states have only slightly dipolar character, which would be difficult to stabilize through hydrogen bonding and consequently reaction less prone to catalysis.

Interestingly, the reaction comprising Schreiner thiourea (C12) had higher activation barriers for both isomers (111.9 kJ·mol−1 for (E) and 95.6 kJ·mol−1 for (Z)). These results suggest that Schreiner thiourea binds stronger to starting silyl ketene acetal than to the corresponding transition state. Therefore, it stabilizes more the starting material than the transition state, which results in the slow-down of the reaction (Figure 3).

Similar trends were observed also for diphenylthiourea and a squaramide (Figure 4).

Using the structures optimized at the ωB97X-D/6-31G* level of theory we calculated interaction energies between catalysts and starting silyl ketene acetals or corresponding transition state structures at the M06-2X/6-311+G** level. For the Schreiner thiourea (C12) as well as diphenylthiourea interaction energies were higher in the starting silyl ketene acetal–catalyst complexes than in the corresponding transition states. For the squaramide catalyst, these energies were similar (Table 6). These calculations further support the notion that hydrogen-bonding organocatalysts bind stronger to starting silyl ketene acetals than to the transition structure and thus are not efficiently catalyzing the Ireland–Claisen rearrangement. The reason for this difference, however, remains unclear. The explanation may be connected to a more compact transition state of sigmatropic rearrangements than their starting materials, which is thus less amenable to additional stabilization via hydrogen-bonding catalysts.

To get further insight, we have performed a kinetic study of the reaction using 1H NMR spectroscopy. Figure 5a shows a comparison of product formation in the presence of 0, 10, and 50 mol % of catalyst C12. As can be seen, the catalyst hindered product formation and at 50 mol % catalyst loading product 3c practically does not form. A reaction profile without catalyst is displayed in Figure 5b. In this case, the formation of a small amount of an unidentified byproduct was also observed. The rate constants for the uncatalyzed and catalyzed reaction are similar. The activation Gibbs energy was determined to be approximately 90 kJ·mol−1, which agrees well with the DFT calculated values. These kinetic measurements support the notion that H-bonding catalysts bind stronger to starting silyl ketene acetals and thus prevent it from undergoing Ireland–Claisen rearrangement. For more details, see Supporting Information File 1.

Chiral hydrogen-bond-donating organocatalysts such as thioureas, squaramides, or alcohols failed to catalyze the Ireland–Claisen rearrangement of silyl ketene acetals. Comparison experiments showed that increasing catalyst loading gradually slowed-down the reaction. DFT calculations using long-range corrected hybrid density ωB97X-D functional showed that thioureas and squaramides stabilize the starting ground state more than the corresponding transitions states. This fact leads to a higher activation barrier and slower reactions in the presence of hydrogen-bond donating organocatalysts. On the other hand, catalyst-free Ireland–Claisen rearrangements proceed well in green solvents such as CpOMe or under solvent-free conditions. NMR kinetic measurements supported the notion that thiourea and squaramide organocatalysts bind strongly to the starting silyl ketene acetals and prevent the Ireland–Claisen rearrangement. Further experiments towards finding more effective organocatalysts are underway in our laboratory.

A typical procedure for Ireland–Claisen rearrangement with Et3N

Ester 1 (2.34 mmol) was added to a solution of Et3N (1.6 mL, 11.5 mmol) in dry CH2Cl2 (2.2 mL) under a nitrogen atmosphere and the reaction mixture was cooled to −60 °C. Then, trialkyl silyl triflate (3.7 mmol) was added dropwise, followed by addition of the organocatalyst (10 mol %) in one portion. The reaction temperature was allowed to reach ambient temperature and the reaction mixture was stirred at this temperature for 24 h. Afterwards, the solvent was evaporated under reduced pressure and Et2O (5 mL) and 1.3 M NaOH (7 mL) were added to the residue. The aqueous layer was washed with CH2Cl2 (3 × 8 mL), and then it was acidified with concentrated HCl. The products were extracted with CH2Cl2 (3 × 8 mL). The organic solution was washed with water (3 × 12 mL) and dried with anhydrous MgSO4. The solvent was evaporated under reduced pressure.

This publication is the result of the project implementation 262401200025 supported by the Research & Development Operational Program funded by the ERDF. We thank Dr. Marek Cigáň for valuable discussions.

© 2019 Krištofíková et al.; licensee Beilstein-Institut.
This is an Open Access article under the terms of the Creative Commons Attribution License (http://creativecommons.org/licenses/by/4.0). Please note that the reuse, redistribution and reproduction in particular requires that the authors and source are credited.
The license is subject to the Beilstein Journal of Organic Chemistry terms and conditions: (https://www.beilstein-journals.org/bjoc) 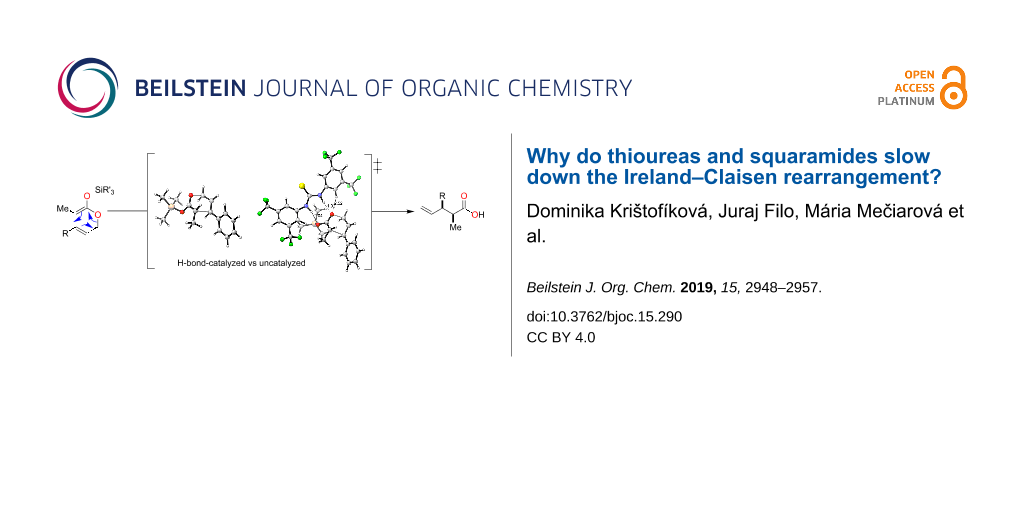