The genus Vibrio, within the class Gammaproteobacteria, are a group of Gram-negative, halophilic, facultatively anaerobic, rod-shaped bacteria, which are motile with sheathed polar flagella [1]. This group is one of the most widespread bacterial genera of marine origin, cataloging 128 species at the time of writing [2], of which more than 12 are known to cause enteritis, marine food poisoning, bacteremia, septicemia, cellulitis, or other infectious diseases in human and aquatic animals [3,4]. Others can fix nitrogen [5], have phototrophy [6], or produce a plant hormone [7], and thus showing a higher metabolic versatility, which is also represented by 150 and more secondary metabolites discovered from this genus [8].

As part of our continuing study on the secondary metabolites of marine bacteria, Vibrio sp. SI9, isolated from the sea anemone Radianthus crispus, was found to produce a known ester 4 and its new congeners 1–3 (Figure 1). Compound 4 is the shortest among the five oligomers of O-isocrotonyl-oligo(3-hydroxybutyrate) (5) previously discovered from Vibrio [9]. In this study, we describe the isolation, structure elucidation, including the absolute configuration, and bioactivity of 1–4.

The producing strain was cultured in a sea water-based medium and then extracted with n-BuOH. The extract was successively fractionated by silica gel chromatography using a gradient of MeOH in CHCl3 and octadecyldimethylsilyl (ODS) flash chromatography with elution by acidic aqueous MeCN. One of the midpolar fractions was purified by reversed-phase HPLC to give 1 (1.5 mg), 2 (11.2 mg), 3 (4.3 mg), and 4 (135.6 mg) from a 3 L culture.

The 1H NMR spectra of 1–4 similarly showed three deshielded resonances (H3, H2', and H3') and a pair of mutually coupled doublet-of-doublets resonances (H22), indicating a shared core structure (Table 1, Table 2, and Supporting Information File 1). In fact, the 13C NMR spectra all had signals in common: two carboxy (carboxamide) and two olefinic carbon resonances along with one oxygenated carbon resonance (see Supporting Information File 1), and the analysis of an HSQC spectrum added two methyl groups and one to three aliphatic methylene groups to this composition. The molecular formula was determined to be C9H14O4 for 1, C10H16O4 for 2 and 3, and C8H12O4 for 4 by HRESIMS–TOF measurements, differing by a factor of one to two methylene units but giving the same three degrees of unsaturation, which are explained by two carboxy groups and one double bond. Thus, 1–4 were confirmed to be a series of acyclic compounds with a varying length of aliphatic chains.

aHMBC correlations from the proton to the indicated carbon atoms.

aHMBC correlations from the proton to the indicated carbon atoms.

The analysis of a COSY spectrum of the smallest congener 4 revealed two C3 fragments, H22–H3(O)–H24 and H2'=H3'–H34'. The geometry at C2' was determined to be Z based on a vicinal coupling constant between the olefinic protons H2' and H3' (J = 11.5 Hz; Table 2). Both of the fragments showed HMBC correlations to the same carboxy carbon C1 (δC 165.6), revealing an intervening ester linkage. Finally, HMBC correlations from the methylene proton H22 and the oxymethine proton H3 to the other carboxy carbon C1 (δC 175.3) placed a carboxylic acid functionality on the methylene group, which completed the structure of 4 as O-isocrotonyl-3-hydroxybutyric acid (Figure 2).

A close similarity of the NMR data for 1–3 (Table 1 and Table 2) allowed the same sequence of structure analysis. The compounds 1 and 2 were found to have extra C1 and C2 extensions on the butyric acid units, while in 3, an extra C2 extension occurred on the isocrotonyl group, as shown by the connectivity established by the analysis of the COSY spectra (Figure 2). Thus, 1–3 were concluded to be O-isocrotonyl-3-hydroxypentanoic acid, O-isocrotonyl-3-hydroxyhexanoic acid, and O-(Z)-2-hexenoyl-3-hydroxybutyric acid, respectively (Figure 1).

A database search identified the planar structure of 4 in a patent that described 5 (Figure 1) from marine obligate Vibrio sp. C-984 [9]. To determine the absolute configuration of C3 in 1–4, an anisotropy-based chiral analysis using a chiral derivatization reagent, phenylglycine methyl ester (PGME), was conducted [10]. The compounds 1–4 were derivatized with (S)- or (R)-PGME by the action of N,N´-diisopropylcarbodiimide (DIC) and N,N-dimethylaminopyridine (DMAP) in CH2Cl2, followed by reversed-phase HPLC to give the respective (S)- or (R)-PGME amides 1a, 1b, 2a, 2b, 3a, 3b, 4a, and 4b. The calculation of the 1H NMR chemical shift differences Δδ(S − R) beyond C3, by subtracting the chemical shift of each proton in the (R)-isomer (1b–4b) from those in the (S)-isomer (1a–4a), gave positive values at C4, C5, and C6 and negative values at C2' and C3' for all four compounds (Figure 3a). Note that the sign distribution of the Δδ(S − R) values in β,β-substituted carboxylic acids is inverted from that observed in the α,α-substituted counterparts (Figure 3b) because the PGME anisotropy group is flipped upside down due to the insertion of an extra methylene group between the chiral center and the carboxylic acid functionality [11]. Thus, the R-configuration was concluded for all four compounds 1–4.

The compounds 1–4 are closely related to PHAs, the energy reserve substances for eubacteria and some species of archaea [12]. Both groups of compounds are composed of (R)-configured 3-hydroxy fatty acids [13], and 3-hydroxybutyric acid in 3 and 4 and 3-hydroxyhexanoic acid in 2 are the most common two building blocks for PHAs [14]. However, degrees of polymerization as low as for 1–4 and the dehydrative modifications are unprecedented, besides for 5 [9].

Because PHAs are by nature biodegradable, can be produced from renewable bioresources, and have material properties close to the conventional petroleum-derived plastics, the commercial production and market development are actively pursued by several companies amid the growing plastic waste crisis [14,15]. Vibrio are perhaps the first to be known as producers of PHAs among marine microbes [16], and are isolated predominantly for the screening of the PHA production [17]. Intriguingly, aquatic farmed animals fed with poly(3-hydroxybutyrate) showed a reduced mortality compared to those not fed when being exposed to pathogenic Vibrio species, suggesting the application of PHAs as a biocontrol agent [18]. Although the toxicity of 1–4 toward the producing strain was not tested, they weakly inhibited the growth of Tenacibaculum maritimum, a causative agent of skin ulcers in marine fish, at MIC values of 25 (1), 50 (2), 50 (3), and 25 μg/mL (4), respectively. None of the compounds showed cytotoxicity against 3Y1 rat embryonic fibroblastic cells below 50 μg/mL.

In summary, the known O-isocrotonyl-3-hydroxybutyric acid (4) and its three new congeners with different alkyl chain lengths, O-isocrotonyl-3-hydroxypentanoic acid (1), O-isocrotonyl-3-hydroxyhexanoic acid (2), and O-(Z)-2-hexenoyl-3-hydroxybutyric acid (3), were isolated from the fermentation extract of the sea anemone-derived bacterium of the genus Vibrio. The application of the anisotropy-based chiral analysis unequivocally determined the (R)-configuration of the 3-hydroxy acid components in 1–4. These compounds showed no cytotoxicity but were weakly antibacterial against a fish ulcer pathogen, Tenacibaculum maritimum. The (2Z)-enoic acyl termini in 1–4 are precedented by 5, discovered from another Vibrio bacterium, and the (R)-configured short-chain 3-hydroxy acids are the common building blocks with PHA, the microbial storage polymer. The structural similarities among 1–5 and PHA suggest a quite similar or even the same biosynthetic origin of these molecules, and hence a potential dehydrative modification at the hydroxy terminus of PHA. MS and NMR analyses combined with state-of-the-art chemical approaches should unveil the detailed structure of PHAs and possibly offer a clue to alter the property of these promising biomaterials.

Optical rotations were recorded on a JASCO P-1030 polarimeter. UV and IR absorption spectra were recorded on a Shimadzu UV-1800 and a Perkin Elmer Spectrum 100 spectrophotometer, respectively. NMR spectra were obtained on a Bruker AVANCE 500 spectrometer, referencing to the residual solvent peaks at δH 7.26 and δC 77.0 for CDCl3. HRESIMS–TOF spectra were measured using a Bruker micrOTOF focus mass spectrometer. The absorbance of a formazan solution at 540 nm was measured on a ThermoFisher Scientific Multiskan Sky microplate reader.

The sea anemone Radianthus crispus was purchased from an aquarium vendor in Nagasaki, Japan. The strain SI9 was isolated from its outer tissue specimen according to the method described previously [19] and identified as a member of the genus Vibrio on the basis of an 98.6% similarity in the 16S rRNA gene sequence (1458 nucleotides; DDBJ accession number LC498627) to Vibrio nereis DSM 19584T (accession number LHPJ01000025).

Fermentation and isolation of 1–4

Preparation of the (S)- and (R)-phenylglycine methyl ester amides

The PGME amides 1a/b–3a/b and 4b were prepared by the same procedure but replacing the starting material and the chiral reagent accordingly.

The antibacterial activity was evaluated by a microculture technique described previously [20], except for a 1:100 reduction of the seeding density of T. maritimum NBRC16015.

3Y1 rat embryonic fibroblastic cells were maintained in low-glucose DMEM medium containing ʟ-glutamine and phenol red (Fujifilm Wako Pure Chemical, 041-29775), supplemented with 10% fatal bovine serum, 100 units/mL penicillin, 100 μg/mL streptomycin, 0.25 μg/mL amphotericin B (Fujifilm Wako Pure Chemical, 161-23181), and 100 μg/mL gentamicin sulfate (Fujifilm Wako Pure Chemical, 078-06061). The cells were seeded in each well of a 96-well culture plate at a density of 2500 cells/well. Meanwhile, the compounds 1–4 and doxorubicin hydrochloride as a positive control were serially diluted 1:3.16 (half-log dilution) by the same medium in a different microtiter plate. After incubating the cell culture for 12 h at 37 °C in an atmosphere of 95% air and 5% CO2 saturated with H2O, the drug solutions were transferred into each cell culture to make up 200 μL of the culture. The highest concentration of the vehicle solvents (MeOH or DMSO) was set at 0.5 vol %, where the growth of the cells was not affected. After incubating the test plate for 84 h, 100 μL of the medium containing MTT 1 mg/mL was added to each well, and the plate was further incubated for 4 h. The medium was carefully removed by aspiration, and formazan dye formed at the bottom of the wells was solubilized by the addition of 150 μL DMSO. The respiration of live cells was quantified by the measurement of the absorption at 540 nm by a microplate reader. The experiment was run in a triplicate, and the rates of the cell-growth inhibition at each concentration were plotted on a single logarithmic chart to deduce the GI50 values of the test compounds.

We thank Profs. Shinichi Ikushiro and Miyu Nishikawa for allowing and instructing us to use the Multiskan Sky microplate reader. Tenacibaculum maritimum NBRC16015 and 3Y1 cells were obtained from the Biotechnology Resource Center, National Institute of Technology and Evaluation and the JCRB Cell Bank, National Institute of Biomedical Innovation, Health and Nutrition, respectively.

Nocarimidazoles C and D, antimicrobial alkanoylimidazoles from a coral-derived actinomycete Kocuria sp.: application of 1JC,H coupling constants for the unequivocal determination of substituted imidazoles and stereochemical diversity of anteisoalkyl chains in microbial metabolites 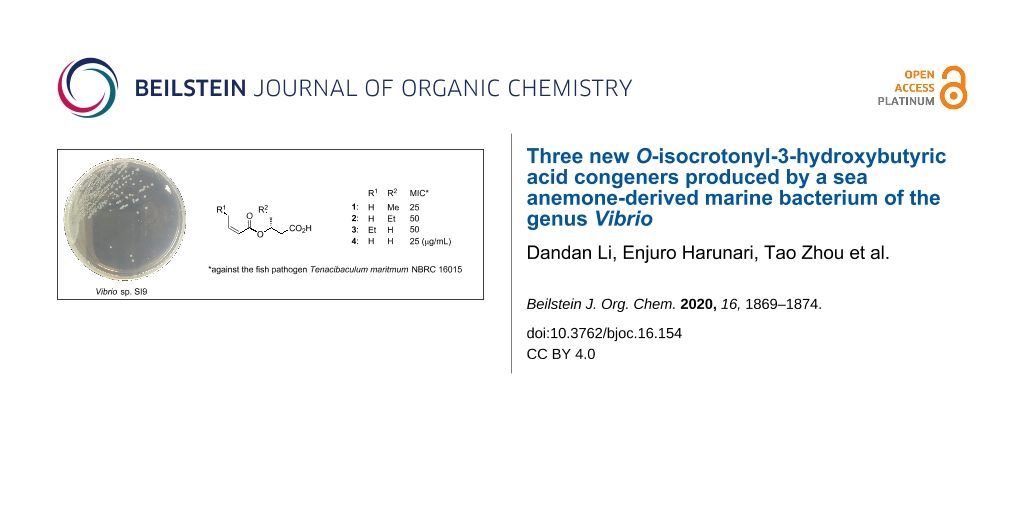