All articles from this author
Emmanuel Magnier

We report herein a practical method to generate CF3Se− (and RFSe−) anions from shelf-stable reagents under iodide activation. Metal-free nucleophilic trifluoromethylselenolations have been then performed with this in situ-generated anion. Perfluoroalkylselenolations have also been described.

Because of the peculiar properties of the fluorine atom, fluorinated compounds gained a growing interest over the last decades and found applications in a large panel of fields from materials to life sciences [1-15]. Fluorinated motifs bring to molecules specific and often unique electronic and physicochemical characteristics. In order to design new substrates with targeted properties, a modulation of the properties of the introduced substituents became fundamental. In this context, the development of innovative fluorinated groups recently emerged, in particular by combining heteroatoms, such as chalcogens, and fluorinated moieties [16].

Despite, the negative reputation of selenium due to its toxicity at high doses, it is an essential trace element for human physiology and biochemistry [17-20]. Furthermore, selenolated compounds found valuable applications in materials [21-23], life sciences [19,20,24-29], and drug design [30-33]. Consequently, the merging of fluorinated moieties, such as CF3 with selenium could constitute an interesting motif in the design of new molecules, in particular in medicinal chemistry or agrochemistry. Even if, to date, there are no CF3Se-containing pharmaceuticals registered [15], a recent work has demonstrated the promising development of trifluoromethylselenolated nonsteroidal anti-inflammatory drugs as potential anticancer drugs [34].

Over the last years, trifluoromethylselenolation reactions have gained a rising infatuation but, despite this recent interest, methods to introduce the CF3Se group into organic substrates remain limited [35,36].

One of the simplest ways to achieve trifluoromethylselenolated compounds is the direct nucleophilic substitution of suitable leaving groups to form the CF3Se–C(sp3) bond. This chemistry is the prerogative of the CF3Se− anion (Scheme 1) [37-40]. However, the formation of this selenium species requires the tedious use of red elemental selenium [41] and also suffers from stability issues. To circumvent these drawbacks, a copper complex has been developed, but in this case the use of a stoichiometric amount of the metal is required [37-39].

Only a few years ago, trifluoromethylselenotoluenesulfonate (1a) has been developed as an efficient reagent to perform electrophilic or radical trifluoromethylselenolations [42-47]. Very recently, we demonstrated that under reductive conditions, such compounds succeeded to perform nucleophilic substitutions [48]. In this reaction, the CF3Se− anion was in situ generated by reduction through a double electron transfer of 1a with TDAE (tetrakis(dimethylamino)ethylene). Even though this umpolung strategy is efficient, the use of the sensitive TDAE, a strong reducing agent, could constitute a drawback for some applications. Consequently, we decided to develop a new umpolung method in non-reductive conditions.

A few years ago, we have demonstrated that trifluoromethanesulfenamides, electrophilic trifluoromethylthiolation reagents, could also perform nucleophilic trifluoromethylthiolations through the transient formation of a CF3SI species which presented an inverted polarity [49,50]. Based on a similar approach, we hypothesized that the CF3SeI species could also possess the CF3Seδ−–Iδ+ inverted polarity. Thus, based on the previously developed conditions, reagent 1a was reacted with benzyl bromide (2a) in the presence of tetrabutylammonium iodide (TBAI) in acetone at 40 °C (Table 1, entry 1).

aYields determined by 19F NMR spectroscopy with PhOCF3 as an internal standard.

The observed result was moderate (Table 1, entry 1). Other solvents, which led also to satisfactory yields in the “sulfur series” were then tested. Acetonitrile did not improve the yield, however, a better one was obtained in THF (Table 1, entries 2 and 3). Interestingly, a shorter reaction time (4 h instead of 15 h) provided similar results (Table 1, entries 3 and 4). At higher temperatures, the results were not improved and even a slight decrease of the yield was observed, possibly due to an increased degradation of CF3SeI or CF3Se− (Table 1, entries 5 and 6). A lower temperature also decreased the yield (Table 1, entry 7). With an excess of reagents 1a and TBAI, leading to an excess of the CF3Se− species, no significant improvement was observed (Table 1, entry 8). On contrary, the use of 2 equivalents of the electrophile 2a, to ameliorate the CF3Se− anion trapping, had a significant effect and gave a very good yield of the product (Table 1, entry 9). With the optimal conditions in hand, the reaction was exemplified with various other electrophiles (Scheme 2).

The reaction gave generally good results with reactive electrophiles such as benzylic, allylic or propargylic ones (3a–k). Noteworthy, in the reaction with 2-(bromomethyl)pyridine (2g) only 1 equivalent was required, maybe due to a higher reactivity. Furthermore, the reaction seems to be very sensitive to steric hindrance as illustrated by the low yield obtained for 3b. In contrast, in the aliphatic series, only low yields were observed (3m,n) except for the activated α-bromo acetophenone (3l). This led us to suppose that CF3Se− might be a poor nucleophile, which is confirmed by the medium yield observed with the propargylic substrate 3k, where the chloride starting material was used instead of the bromide as for the other compounds. Noteworthy, because of the volatility of the obtained products, the isolated yields were sometimes significantly below the NMR yields.

Higher fluorinated homologs of 1a were also synthesized. Consequently, an extension of this method was considered with pentafluoroethylated and tridecafluorohexylated reagents 1b and 1c. Good yields were obtained, in particular for 5a which constitutes, to the best of our knowledge, the first example of a direct nucleophilic tridecafluorohexylselenolation.

From a mechanistic point of view, a pathway inspired by the reaction described with trifluoromethanesulfenamides was postulated (Scheme 3) [49].

The first equivalent of iodide (from TBAI) reacts with the reagent 1a to produce the transient species CF3SeI with an inverted polarity on the selenium atom. This compound then undergoes the attack of the second equivalent of iodide to generate the CF3Se− anion with releasing of I2. Finally, the nucleophilic CF3Se− can substitute the leaving group onto the electrophilic substrate 2. However, because of the release of I2, as side reaction the oxidation of the CF3Se− anion can be also envisaged. This was confirmed by the formation of 25–30% of CF3SeSeCF3 when 1 equivalent of 2a was used (Table 1, entries 3 and 4). Consequently, the nucleophilic substitution is in competition with this relatively fast oxidation. By adding an excess of the electrophile 2, the substitution is favored detrimentally to the oxidation. Nevertheless, with weaker or hindered electrophiles, the oxidation reaction is favored compared to the slower substitution. This is adequate with the observed results. Noteworthy, the supposed formation of I2 was strengthened by the appearance of a red-brown color of the reaction media which faded after the addition of sodium thiosulfate. As demonstrated in the sulfur series [49], the in situ formation of an alkyl iodide from 2, through a Finkelstein reaction, can be also envisaged. This would not impact the reaction pathway since the released bromide can also activate the CF3SeI species to provide the expected CF3Se− anion.

To conclude, trifluoromethylselenotoluenesulfonate confirmed to be a versatile reagent able to perform electrophilic, radical or nucleophilic reactions depending on the conditions. The iodide-mediated, metal-free method is complementary to the previous one using TDAE. Thus, the umpolung reactivity of trifluoromethylselenotoluenesulfonate can be performed under reductive or oxidative conditions. Furthermore, this method was extended to higher fluorinated homologs allowing the first nucleophilic tridecafluorohexylselenolation.

Typical procedure: In a 10 mL flame-dried flask tube equipped with a magnetic stirring bar was added 1a–c (0.2 mmol, 1 equiv) followed by 0.4 mL of dry THF. Then, compound 2a–n (0.4 mmol, 2 equiv) was added followed by TBAI (0.4 mmol, 2 equiv). The tube is then sealed and the reaction mixture stirred at 40 °C for 4 h. The conversion was checked by 19F NMR spectroscopy with PhOCF3 as internal standard. After completion, the reaction mixture was partitioned between Et2O or pentane and water. The aqueous layer was extracted with Et2O and pentane and the combined organic layers were dried over MgSO4, filtered and concentrated to dryness. The crude residue was purified by chromatography to afford the desired products 3, 4, or 5.

This work was supported by a grant from the French National Research Agency (ANR 18-CE07-0039-01). The authors are grateful to the CNRS and the French Ministry of Research for financial support. The French Fluorine Network is also acknowledged for its support.

© 2020 Grollier et al.; licensee Beilstein-Institut.
This is an Open Access article under the terms of the Creative Commons Attribution License (https://creativecommons.org/licenses/by/4.0). Please note that the reuse, redistribution and reproduction in particular requires that the author(s) and source are credited and that individual graphics may be subject to special legal provisions.
The license is subject to the Beilstein Journal of Organic Chemistry terms and conditions: (https://www.beilstein-journals.org/bjoc/terms) 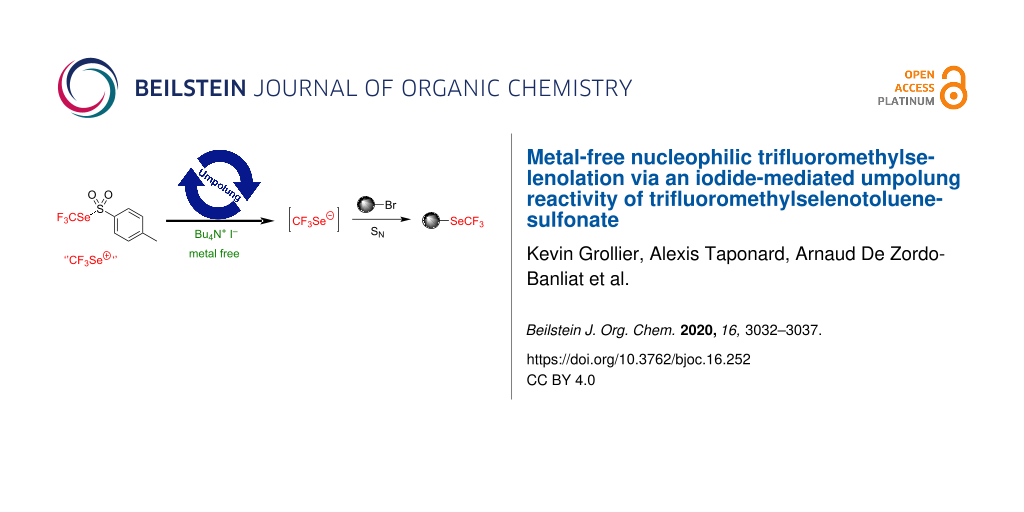