A method for the one-step construction of 3,3,4,4-tetrafluorinated piperidines from nitrones and readily accessible tetrafluorinated iodobromobutane is described. The reaction requires an excess amount of ascorbic acid as the terminal reductant and is performed in the presence of an iridium photocatalyst activated by blue light. The annelation is a result of a radical addition at the nitrone, intramolecular nucleophilic substitution, and reduction of the N–O bond.

Nitrogen-containing heterocyclic compounds play an important role in pharmaceutical industry and related areas [1,2]. Among the variety of aromatic and saturated structures, the piperidine ring has a special role, as it is the most widely occurring form of nitrogen in FDA-approved drugs [3]. The ability of fluorine atoms to modify basicity, lipophilicity, as well as the hydrogen-bonding properties of amines [4,5] makes fluorinated piperidines [6,7] attractive targets in medicinal chemistry [8,9]. Previous efforts were mainly focused on the synthesis of mono- and difluorinated compounds. A single fluorine atom is typically introduced into a saturated cycle by nucleophilic fluorination reactions [10-17]. For compounds bearing gem-difluorinated fragments, an alternative pathway based on the construction of the cycle from building blocks may be considered [18]. However, the latter frequently implies multistep protocols, since two distinct bond-forming reactions are necessary for the cycle formation. While mono- and difluorinated piperidines are well known, tetrafluorinated piperidines are rare [19]. At the same time, the chemistry of compounds containing the tetrafluoroethylene fragment (CF2CF2) has advanced considerably over the last decade [20], and the use of preformed tetrafluorinated building blocks [21] provides the most efficient way of making these molecules.

Recently, we disclosed a photoredox method for the reductive radical fluoroalkylation of nitrones [22-24]. We have also evaluated the construction of fluorinated tetrahydroisoquinoline structures starting from nitrones, but this required four consecutive reactions with different conditions and chromatographic separation at each step [25] (Scheme 1). Herein we report a single-step protocol for the construction of fluorinated piperidines based on an accidentally discovered annelation reaction proceeding under reductive conditions.

Nitrone 1a was selected as a model substrate and it was combined with commercially available dibromide 2a under blue light irradiation in the presence of an iridium photocatalyst and stoichiometric quantities (1.2 equiv) of a reducing system (ascorbic acid/collidine). In this reaction no products were formed with reactant 2a remaining unconsumed (Table 1). To obtain a more reactive fluorinated halide, the bromine atom residing at the fluorinated moiety was exchanged for iodine by treatment with zinc, followed by the reaction with iodine monochloride. The iodide 2b reacted quite rapidly with the nitrone but the expected fluoroalkylation product was not observed. Instead, the tetrafluorinated piperidine 3a was obtained in a moderate yield (Table 1, entry 2). Apparently, after the fluoroalkylation event, the reduction of the N–O bond had occurred. The corresponding addition of an additional amount of the reductant and performing the reaction in DMF led to product 3a in 84% isolated yield (Table 1, entry 4).

Under the optimized conditions, a series of nitrones were involved in the reductive annelation reaction (Scheme 2). The process worked with nitrones containing alkyl, halogen, and electron-donating groups in the aromatic ring. With ester and cyano groups, the piperidines 3h and 3j were obtained in decreased yields, which may be tentatively attributed to a greater propensity of the corresponding nitrones towards nucleophilic addition of ascorbate. The nitrones derived from α-unbranched aliphatic aldehydes also provided the expected piperidines (products 3m–q) in reasonable yields. In case of 3n there was some unidentified side product formed under the standard conditions. In the previous research on the radical addition to nitrones we sometimes encountered a fluoroalkylation of the aromatic rings, if an excess of the fluorinated alkyl iodide was used [22-24]. This prompted us to attempt the reaction with an equimolar amount of the iodide 2b, which resulted in a cleaner process. However, the reaction of a nitrone obtained from cyclohexyl carboxaldehyde gave a complex mixture containing unidentified products. The structures of compounds 3f and 3h were established by X-ray analysis (CCDC, 3f: 2032382; 3h: 2032383).

The proposed annelation mechanism is shown in Scheme 3. The iridium(III) photocatalyst under the action of light and ascorbic acid generates the iridium(II) species. The latter serves as a key reducing agent, and importantly, its formation is maintained throughout the process while an excess amount of ascorbate is present. The annelation likely starts from the addition of the fluorinated radical to the C=N bond followed by a conversion of the nitroxyl radical via hydrogen atom transfer [26,27] providing hydroxylamine 4. At the next stage, the intramolecular N-alkylation occurs leading to an N-oxide. This step of nucleophilic substitution could be catalyzed by iodide anions accumulating in the reaction mixture. Finally, the deoxygenation of the N-oxide fragment may proceed via consecutive protonation and electron-transfer steps [28].

In summary, a one-step method for the synthesis of tetrafluorinated piperidines starting from nitrones and a fluorinated building block is described. The annelation is based on a sequence of visible-light-promoted redox processes and a substitution reaction, and involves the cleavage of the N–O bond.

The crystal structure determination was performed in the Department of Structural Studies of the Zelinsky Institute of Organic Chemistry, Moscow.

This work was supported by the Russian Foundation for Basic Research (project 18-03-00320).

© 2020 Supranovich et al.; licensee Beilstein-Institut.
This is an Open Access article under the terms of the Creative Commons Attribution License (https://creativecommons.org/licenses/by/4.0). Please note that the reuse, redistribution and reproduction in particular requires that the author(s) and source are credited and that individual graphics may be subject to special legal provisions.
The license is subject to the Beilstein Journal of Organic Chemistry terms and conditions: (https://www.beilstein-journals.org/bjoc/terms) 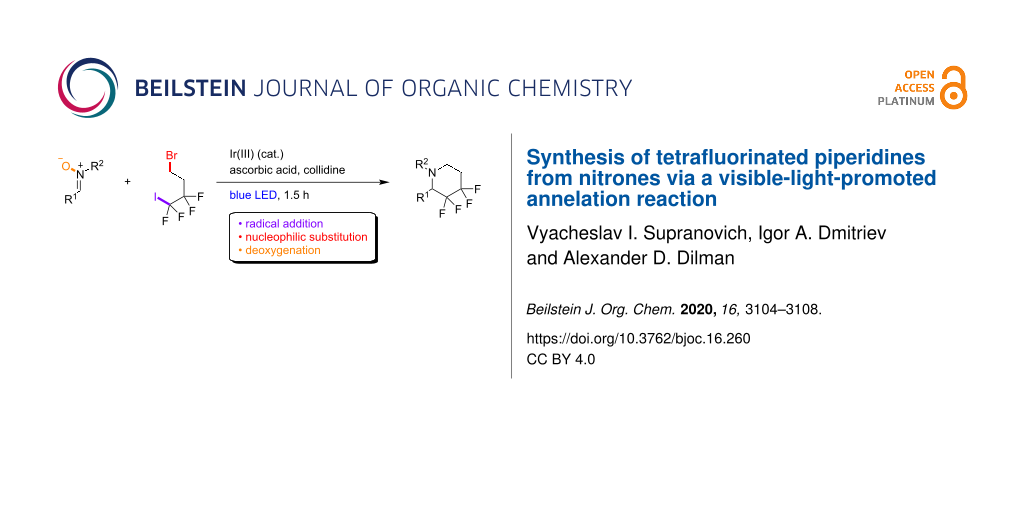