All articles from this author
Nikolett Péczka


All articles from this author
Zoltán Mucsi


All articles from this author
and György Keglevich

P-Heterocyclic derivatives are valuable targets in synthetic organophosphorus chemistry [1-4]. A heterocyclic ring containing a P atom appears in many popular P(III)-ligands, such as BPE, DuPhos, TangPhos, DuanPhos, ZhangPhos [5-11], among which a number of species may be considered as privileged ligands for transition metal-catalyzed enantioselective transformations [12]. Among the P-heterocycles with various ring size, the five-membered derivatives received special attention due to their optimal bond angles and shapes [13,14]. Besides their application as ligands [13,15], the five-membered heterocycles may also be valuable organocatalysts in reactions involving a P(III)–P(V) redox cycle, such as in catalytic Wittig-, aza-Wittig-, Staudinger-, Appel- and other reactions [16-21]. The ring strain of the four- and five-membered derivatives makes them highly susceptible to deoxygenation, thus they are ideal organocatalysts in P(III)–P(V) redox-coupled transformations [18,22,23]. Polycyclic compounds incorporating a P-heterocyclic moiety are of special importance due to their optoelectronic properties and applications [24-26]. Moreover, a few biologically active 5-membered P-heterocyclic derivatives are also known, which showed promising antitumor [27-30], antifungal [31,32] or GABA receptor antagonist activity [33].

The most common synthesis of a given functionalized P-heterocyclic compound comprises the synthesis of the heterocyclic core, followed by its functionalization [27,29,34,35]. This latter step is of special importance for biologically active compounds, as specific functional groups are necessary to have a desired biological activity. Considering the functionalization of the five-membered P-heterocycles, the derivatives containing double bond(s) (i.e., phospholenes or phospholes) are of special importance, as a double bond may be functionalized by diverse reactions [36]. Considering the phospholenes, the position of the double bond (2- or 3-phospholenes) offers different possibilities for further transformations (Figure 1) [37-46]. Moreover, the presence of the double bond in the 2-phospholene derivatives is beneficial for having enhanced organocatalytic activity, in a few instances [47].

The McCormack cycloaddition is a key reaction for the preparation of the five-membered P-heterocyclic scaffold, as both the 2- or 3-phospholene core can be prepared depending on the butadiene derivative and P-reagent used [36,48-50]. However, the long reaction times, as well as the moderate or low yields make this approach less appealing. More recent syntheses of the phospholene oxides involve either a ring-closing metathesis [35,51-54], or a double Arbuzov reaction of 1,4-dichlorobut-2-ene and a silylated P-reagent [34,35,55]. However, these syntheses generally afford the corresponding 3-phospholene oxides, and only a few examples are known to provide the corresponding 2-phospholene derivatives [56,57], which raises the necessity of complementary synthetic strategies for 2-phospholene oxides (Figure 1).

In order to study how the different substituents influence the rate of isomerization, a series of 1-substituted-3-methyl-3-phospholene oxides 1 was heated at 200 °C for 1 day in the absence of any solvent. The results indicated that the isomerization was not complete in any case even with prolonged reaction time, as the ratio of the 2- and 3-phospholene oxide isomers 4 and 1 was in the range of 43:57 and 60:40 for the alkyl derivatives (4h–l and 1h–l), and in between 63:37 and 85:15 for the arylphospholene oxides (4a–g and 1a–g). Due to the decomposition at the high temperature applied, yields of the crude products were moderate dropping in the range of 46–84% (Table 4). For the phenyl and the ethyl derivative (1a and 1h), the reaction time was extended to 5 days. However, this extension did not influence the ratio of the 2- and 3-phospholene oxide isomers (4 and 1) significantly (see Supporting Information File 1 for the results).

It is noteworthy, that in case of 1-phenyl-3,4-dimethyl-3-phospholene oxide (8), the isomerization involves the formation of an additional stereogenic center and the corresponding 2-phospholene oxide (10) was obtained as a mixture of cis- and trans-diastereomers. The ratio of these two diastereomers was in the range of 60:40 to 55:45. The cis- and trans-diastereomers (cis- and trans-10) were separated by column chromatography, and they were identified by nuclear Overhauser effect (NOE) NMR spectroscopy. In the ROESY spectrum of the cis-diastereomer (cis-10), the phenyl 1H resonances give NOE/ROE crosspeaks with the C(4)H and one of the C(5)H2 1H resonances. By contrast, in the spectrum of trans-diastereomer (trans-10), phenyl 1H resonances give NOE/ROE crosspeaks with C(4)-methyl and the other one of the C(5)H2 1H signals (see Supporting Information File 1 for details). Thus, based on the distinctive NOE patterns of phenyl resonances, the two diastereomers (cis- and trans-10) could be unambiguously identified.

For the isomerization under thermal conditions, three mechanisms (mechanism A, B or C in Scheme 2) were outlined and examined by theoretical methods. Mechanism A involves a monomolecular rearrangement, involving zwitterionic structure 11 via high energy and a four-membered ring transition state [TS(1→11)]. This stressed structure has a rigid, entropically unbeneficial transition. The second transition state [TS(11→4)] represents a significantly lower energy gap with a more comfortable five-membered ring. As the thermal rearrangement was only feasible under solvent-free conditions, one may assume mechanism B, which involves the formation of phospholene oxide 1 dimers, and the second molecule only assists the rearrangement similarly to mechanism A. However, according to computations, in this arrangement the neighboring P=O group has only marginal beneficial effect on the activation enthalpies, compared to mechanism A. In the third possibility (mechanism C1), the proton from the C(2)H2 moiety can migrate to the P=O group in the second molecule, forming quasi-deprotonated (anionic) and protonated (cationic) molecules [TS(1→14)]. However, this arrangement is not stable, and a stabilized homodimer with a pentavalent P atom 14 is formed immediately. This quasi-autocatalytic process decreases significantly the enthalpy demand of the TS to a reliable level, and finally it gives the corresponding 2-phospholene oxide 4. More interestingly, mechanism C2 shows that the enthalpy level of the process decreases by 7–10 kJ mol−1 if a heterodimer (1–4) is formed instead of a homodimer (1–1). Thus, the 2-phospholene oxide 4 can enhance the rate of the isomerization by 6 times at temperature of the reaction (570 K).

In order to verify the computed reaction mechanism of the 3-phospholene oxide 1–2-phospholene oxide 4 rearrangement, standard kinetic experiments were run for the substituted aryl- or ethyl-3-methylphospholene oxides (1c–f or 1h) at a constant temperature. The reactions were carried out at 200 °C in neat, and the progression of the reactions was followed by gas chromatography for two days using biphenyl as internal standard. According to repeated experiments, the errors in measured relative concentrations were below 5%. The concentration curves undoubtedly refer to an equilibrium reaction, reaching a final concentration of 1 and 4 (Figure 2a). The results of this kinetic study indicated that the electron-donating groups on the phenyl ring accelerated, while the electron-withdrawing groups decelerated the isomerization in the first few hours.

The isomerization of 3-phospholene oxides 1 also proceeds in the presence of strong acids, such as methanesulfonic acid. On the one hand, the reaction rate increased in the presence of MeSO3H, on the other hand, the reaction mixture contained a much higher amount of the 2-phospholene oxide 4, as compared to the thermal- or base-catalyzed reactions. Scheme 3 shows the computed reaction mechanism of the acidic transformation, which starts from the complex formed from MeSO3H and the 3-phospholene oxide 16A, involving in a protonation equilibrium with 16B. In the next step, the acid migrates to position C(4), and the olefinic carbon atom can be easily protonated via a high enthalpy transition state [TS(17→18)], which is the rate determining step of this reaction sequence. We suppose that this rather high enthalpy is much lower due to the tunneling effect of the proton, whose energy gap is estimated to be reduced to about 130 kJ mol−1 in an optimal arrangement of the proton [73,74]. After the transition state, the mesylate anion attacks consecutively the position C(3), forming a neutral, relatively low-enthalpy intermediate 18. The departure of the mesylate anion from position C(3) attracts the proton from C(2) via a lower-enthalpy transition state [TS(17→18)] yielding the expected product, complexed by the acid 19A. Considering the equilibrium only between 16A–B and 19A–B, the product side is already shifted by −8.5 kJ mol−1 or −2.4 kJ mol−1, which makes the formation of 4a or 4h a beneficial process, meaning a shifted equilibrium towards the corresponding 2-phospholene oxide (4a or 4h). Comparing the calculations for the phenyl- and ethylphospholene derivatives, one can conclude that there is no significant difference in the reaction enthalpies for the aryl- and alkylphospholene oxide models.

The calculations showed that the reaction mechanism follows a simple sequence under basic conditions (Scheme 4). In the first step the base makes the reactant–base complex 20, and the consequent deprotonation occurs at position C(2), which is more favorable than the same process at position C(5) (by ca. 3–4 kJ mol−1). An anionic intermediate 21 is formed in this manner, and the related transition state represents a low enthalpy barrier (ca. 55 kJ mol−1), which is lowered by the tunneling effect of the proton. In the final step, the protonated base gives back the proton to the position C(4) also via a transition state with a low enthalpy barrier (ca. +20 kJ mol−1) yielding the corresponding 2-phospholene oxide 4 The calculations showed that the base does not affect the enthalpy difference between the 3- and 2-phospholene oxides 1 and 4 maintaining the thermodynamic equilibrium, it has only an accelerating catalytic effect on the reaction rate. Consequently, the expected ratio of the 2- and 3-phospholene oxides 4 and 1 is similar to the results obtained under thermal conditions. These theoretical findings are in accordance with the experimental results. Interestingly, the strength of the base applied may change the reaction rate significantly, as the reaction enthalpy of the intermediate 21 changes compared to 20. Pyridine is not able to take over the proton from the molecule (the structure 20 is not a minimum on the potential hypersurface (PES)). Triethylamine can initiate the deprotonation, but the reaction enthalpy towards 21 is very endothermic, making the reaction rate negligible, as observed in the experiment. In the case of KCO3− (instead of Cs2CO3), the deprotonation proceeds smoothly with almost a thermoneutral fashion, predicting a significant improvement in the reaction rate. According to the estimated enthalpy value of the TS for 20→21, one may expect a relatively fast process with Cs2CO3 even at moderate temperatures, however, the poor solubility of the inorganic salt demands a higher reaction temperature. Finally, the deprotonation by NaOEt is already a slightly exothermic process, suggesting a fast transformation.

The general methods and instruments, the preparation of the starting materials, a few experimental procedures, the details of the optimization, kinetic studies and computations, as well as the characterization and NMR spectra of the new compounds can be found in the Supporting Information.

Authors are thankful to Béla Mátravölgyi for the fruitful conversations throughout the synthetic work and the preparation of the manuscript.

© 2020 Bagi et al.; licensee Beilstein-Institut.
This is an Open Access article under the terms of the Creative Commons Attribution License (http://creativecommons.org/licenses/by/4.0). Please note that the reuse, redistribution and reproduction in particular requires that the authors and source are credited.
The license is subject to the Beilstein Journal of Organic Chemistry terms and conditions: (https://www.beilstein-journals.org/bjoc) 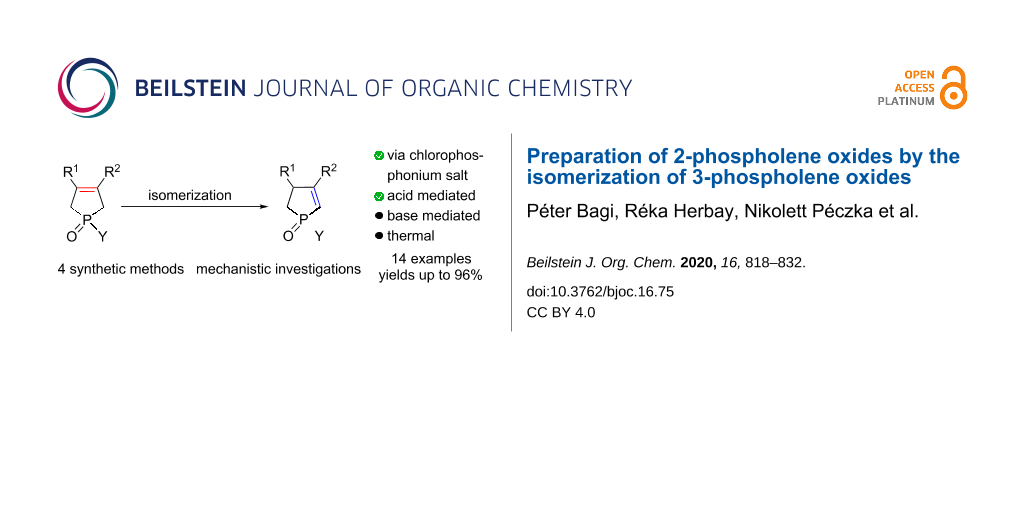