All articles from this author
Attila M. Remete


All articles from this author
Loránd Kiss

This work presents an examination of the selective functionalization of norbornadiene through nitrile oxide 1,3-dipolar cycloaddition/ring-opening metathesis (ROM)/cross-metathesis (CM) protocols. Functionalization of commercially available norbornadiene provided novel bicyclic scaffolds with multiple stereogenic centers. The synthesis involved selective cycloadditions, with subsequent ROM of the formed cycloalkene-fused isoxazoline scaffolds and selective CM by chemodifferentiation of the olefin bonds of the resulting alkenylated derivatives. Various experimental conditions were applied for the CM transformations with the goal of exploring substrate and steric effects, catalyst influence and chemodifferentiation of the olefin bonds furnishing the corresponding functionalized, fluorine-containing isoxazoline derivatives.

Olefin metathesis is considered to be a powerful synthetic tool for the creation of olefin bonds [1]. Several types of metathesis reactions, such as ring-opening metathesis (ROM), cross-metathesis (CM), ring-closing metathesis (RCM) or ring-opening/cross-metathesis (ROCM) have found high utility in the creation of C=C bonds and in the synthesis of a number of organic molecules, functionalized scaffolds or various building blocks. The efficient catalytic activity and remarkable functional group tolerance of commercially available versatile Ru-based olefin metathesis catalysts have allowed wide applicability of these transformations [1-8]. Moreover, the robustness of many commercial Ru-based catalysts has enabled the general application of olefin metathesis in the synthesis of versatile functionalized heterocycles [9-11], a wide variety of natural products (especially macrocycles) [12], alkaloids [13], amino acids and functionalized biomolecules such as peptides [14-20] or various drugs [21]. Due to the ring strain, bicyclic systems and derivatives, such as norbornadiene derivatives can easily be converted across ROM or ROCM into a variety of alkenylated, functionalized scaffolds [22-34]. Although metathesis is a reversible process, it is often shifted towards a certain direction. For example, the equilibrium of the reaction of ethylene with a strained ring system and the corresponding ROM product is shifted towards ROM because ring strain disfavors reclosing of the ring system. Therefore, functionalized norbornenes, which are highly strained scaffolds, easily provide a number of functionalized cyclopentanes across the ROM/CM process.

It is well known that the structure of a certain metathesis substrate, the nature of the catalyst and all experimental conditions may highly influence metathesis reactions and determine the outcome of olefin metathesis. The accurate prediction of a specific catalyst, including its efficiency, the suitable experimental conditions such as catalyst loading, temperature, solvent, reaction time or even work-up seem to be a difficult task. It is observed that there is no single universal catalyst suitable for all types of metathesis reactions, and there is no general relationship between the structure of the substrate and the type of catalyst. These assumptions might be valid, in particular, for selective processes such as selection between the olefin bonds by chemodifferentiation or chemodiscrimination [1-8,22].

Since the nature of the substrate, catalyst as well as reaction conditions affect the outcome of metathesis, various publications were dedicated to studies describing selective CM or ROCM transformations. The accurate prediction of selectivity regarding CM reactions is still considered to be a challenging issue among synthetic organic chemists. Of numerous factors contributing to the observed selectivities in metathesis reactions, H-bonding interactions between chloride ligands as H-bond acceptors and OH or NH functions in the metathesis intermediate appear to be determining [35,36].

Selectivity derived from chelation is considered to be an another important contributor. Through the formation of intermediates with stable (e.g., six-membered) chelate ring systems, the chelation ability of oxygen functionalities to ruthenium during metathesis can greatly influence the outcome of the CM reaction [36,37]. Steric factors are another important phenomenon, which will possibly contribute to the selectivity of olefin bonds during a CM reaction [38-43].

Investigations of various types of olefins in CM, such as substituted and functionalized styrenes, unsaturated tertiary alcohols, olefins with quaternary carbon centers, acrylates, allyl ethers or allyl acetates gave a general model suitable for the prediction of product selectivity and olefin bond chemodifferentiation in cross metathesis. In general, regarding the reactivity of the olefin bond in CM, alkenes can be categorized by the relative ability to undergo homodimerization via CM and the possibility of the corresponding homodimers for novel secondary metathesis reactions [44]. Thus, olefins can be categorized as type I (fast homodimerization), type II (slow homodimerization), type III (no homodimerization) and type IV (unreactive olefins, spectators to CM) [44].

Although olefins with perfluorinated alkane moiety are considered as to be of type II, only a handful of literature data are available on the behavior of fluorine-containing olefins or perfluorinated alkenes. The incorporation of fluoroalkyl moieties (such as difluoromethyl, trifluoromethyl and perfluoroalkyl groups) into an organic molecule can often enhance the pharmacokinetic properties of lead candidates in drug research through the improvement in lipophilicity, absorption, distribution, hydrophobicity and metabolism. Considering the high importance of organofluorine chemistry and that of fluoroalkyl groups in pharmaceutical chemistry, a wide range of novel and efficient protocols for the introduction of fluorinated scaffolds or fluoroalkyl groups onto organic molecular entities represent a hot topic in synthetic organic chemistry [45-48]. In order to prepare a certain fluorinated organic molecule, two common approaches are used: i) late-stage fluorination, when the fluorine atom is incorporated in the final step of the synthetic protocol (e.g., deoxofluorinations) or ii) application of various commercial fluorine-containing scaffolds (e.g., fluorine-containing amines, fluorine-containing alkenes etc.) [49-58]. It is to be noted that a recent review has been devoted to the synthesis of various fluorine-containing derivatives through various metathesis techniques by the application of versatile fluorinated substrates [59].

The aim of the current work was to investigate the selective functionalization of readily available norbornadiene across nitrile oxide cycloaddition/ROM/CM protocols in view of the access of various fluorine-containing molecular entities as well as to explore the chemical behavior of olefin bonds in the reaction with some fluorinated alkene derivatives in view of chemodifferentiation. The reactions were performed with various olefin metathesis catalysts to find the most optimal conditions (Figure 1).

The starting divinyl-substituted bicyclic isoxazolines were synthesized according to literature methods, as shown in Figure 2, utilizing nitrile oxide cycloaddition according to the Mukaiyama method followed by ROM of the major product. All five catalysts provided the desired products to some extent, but HG-1 gave the highest yield of (±)-4: 76%, (±)-5: 75% and (±)-6: 87% [41].

Further functionalization of compounds (±)-4–6 was attempted via CM with a high number of fluorine-containing alkenes (Figure 3). Compounds 7a and 7b as well as 7f–h were type I olefins, while acrylate esters 7c–e were type II olefins. Because 1st generation metathesis catalysts usually perform poorly in CM reactions with acrylates [31,32,36,39,41], only G-2, HG-2 and G-3 were used in our CM steps.

CM reactions of compound (±)-4 were investigated first. With 4-bromo-3,3,4,4-tetrafluorobut-1-ene and allyl 2,2,2-trifluoroacetate, no CM product was observed. However, CM reactions with 1,1,1,3,3,3-hexafluoropropan-2-yl acrylate (7c) were successful (Scheme 1 and Table 1). When catalyst HG-2 was used (Table 1, entries 1 and 2), decomposition of the catalyst with NaHCO3 in aqueous MeOH during workup improved the yield. Therefore, catalyst decomposition was incorporated into the workup procedure of all other CM reactions.

aMeOH, H2O/NaHCO3 were not added before concentration of the mixture. Note: all yields reported in tables are isolated yield values.

Note, that although the yield of the CM is relatively low, a full conversion of the starting isoxazoline could be detected. However, all CM transformations alongside the desired coupled compounds afforded a significant amount of unidentifiable polymeric material.

We continued our work with the study of CM reactions of compound (±)-5, which has a slightly longer alkyl chain on the heteroring compared to that of (±)-4. Similar to (±)-4, no CM product was observed with olefins 7a and 7b. In contrast, CM reactions with 7c were successful (Scheme 7 and Table 7). With HG-2 catalyst, dimetathesized compound (±)-14c was the main product, and some monometathesized (±)-14a was also formed. With G-2 catalyst, the outcome was the opposite. Interestingly, G-3 catalyst provided only an inseparable mixture of monometathesized products (±)-14a and (±)-14b (note, that compound (±)-14b was not formed in the presence of HG-2 or G-2).

Cross metathesis of substrate (±)-6 with unsaturated alcohol 7f was also performed (Scheme 16 and Table 15). The reaction was completely regioselective with HG-2 and G-2 catalysts, and provided only a single monocoupled product, (±)-23a. The best yield was achieved with G-2 catalyst.

An insight into the study of selective functionalization of norbornadiene through nitrile oxide 1,3-dipolar cycloaddition/ROM/CM strategies was presented. The stepwise functionalization of norbornadiene across the ring olefin bonds generated fluorine-containing alkenylated cyclopentane-fused isoxazolines. The synthetic protocol was based on selective nitrile oxide cycloaddition to the norbornadiene C=C bond, followed by ROM of the resulting cyclopentane-fused isoxazolines. In the final step, selective CM by chemodifferentiation of the newly created olefin bonds on the resulting alkenylated derivatives took place. As coupling olefin partners in CM reactions, several commercial fluorine-containing alkenes have been investigated (type I and type II), and CM has been studied in order to explore the substrate effect, catalyst influence and the chemical behavior of the olefin bonds. Second-generation Ru-based commercial catalysts G-2 and HG-2 as well as third-generation G-3 were found to be more effective in the CM transformations. Note, that first-generation catalyst HG-1 did not afford cross-metathesized products.

Further investigations in view of the selectivity of CM reactions with other novel model compounds as well as further functionalization strategies are currently being investigated in our group.

We are grateful to the Hungarian Research Foundation (NKFIH K 119282) for financial support. The financial support of the GINOP-2.3.2-15-2016-00038 project is also acknowledged. This research was supported by the EU-funded Hungarian grant EFOP-3.6.1-16-2016-00008. The Ministry of Human Capacities, Hungary (grant 20391-3/2018/FEKUSTRAT) is also acknowledged. This work was supported by the ÚNKP-20-3 - New National Excellence Program of the Ministry for Innovation and Technology from the source of the National Research, Development and Innovation Fund.

Jan Wallbaum and Daniel B. Werz

© 2021 Benke et al.; licensee Beilstein-Institut.
This is an Open Access article under the terms of the Creative Commons Attribution License (https://creativecommons.org/licenses/by/4.0). Please note that the reuse, redistribution and reproduction in particular requires that the author(s) and source are credited and that individual graphics may be subject to special legal provisions.
The license is subject to the Beilstein Journal of Organic Chemistry terms and conditions: (https://www.beilstein-journals.org/bjoc/terms) 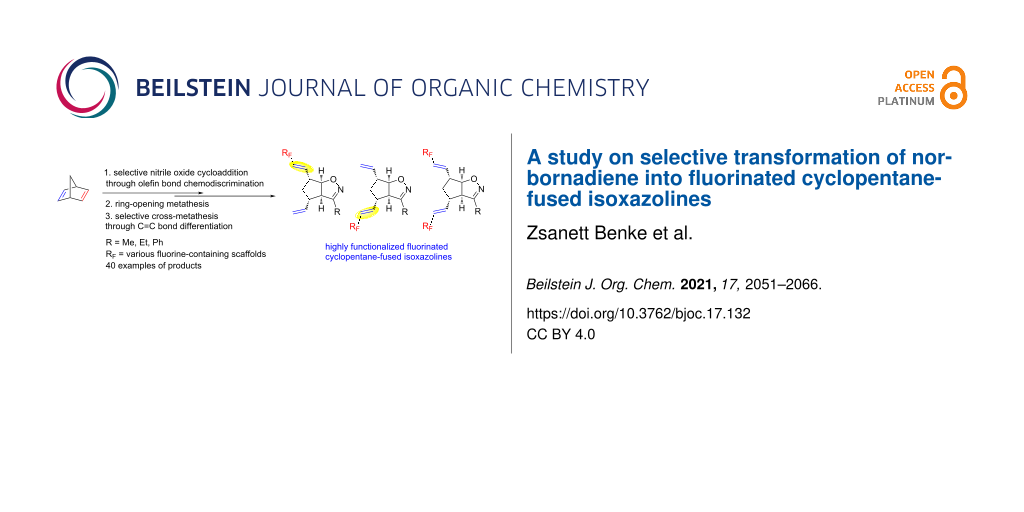