All articles from this author
David M. Hodgson

α-Lithiated terminal epoxides and N-(tert-butylsulfonyl)aziridines undergo eliminative cross-coupling with α-lithio ethers, to give convergent access to allylic alcohols and allylic amines, respectively. The process can be considered as proceeding by selective strain-relieving attack (ring-opening) of the lithiated three-membered heterocycle by the lithio ether and then selective β-elimination of lithium alkoxide.

Methods for the convergent generation of alkenes can be of significant utility in organic synthesis [1]. A relatively under-examined approach is through the interaction of two carbenoids [2]. Dimerisation of carbenoids may compete with a desired carbenoid transformation although its value has been demonstrated in, for example, our studies on lithium 2,2,6,6-tetramethylpiperidide (1, LTMP)-induced syntheses of 2-ene-1,4-diols and 2-ene-1,4-diamines from terminal epoxides [3] and aziridines [4,5], respectively (Scheme 1). The eliminative cross-coupling of carbenoids can provide a way to unsymmetrical alkenes, provided the differential reactivity of the two carbenoids is suitably matched [2]. In the current letter, we report preliminary results on the latter strategy to form alkenes which possess an allylic heteroatom (hydroxy, amino) functionality (Scheme 2).

Our studies began (Scheme 3) by reaction of BuLi (4 equiv) with a mixture of stannane 4 [6] (2 equiv) and tetramethylpiperidine (TMP, 2 equiv), to generate methoxymethyllithium and LTMP, followed by addition of terminal epoxide 5. This led to the desired allylic alcohol 6 (38%), likely via the selective (ring strain-relieving) 1,2-metalate rearrangement outlined in Scheme 2 (2→3, X = O, LG = OMe), then preferential β-elimination [7,8] of lithium methoxide rather than dilithium oxide. However, also isolated was dodecanal (50%), which arises from hydrolysis during work-up of the enamine that is formed from trapping of the lithiated epoxide by LTMP [9,10]. Omitting LTMP gave a significantly improved yield of the allylic alcohol 6 (79%, using BuLi and stannane 4 (3 equiv each)). This latter result suggests that methoxymethyllithium is capable of deprotonating terminal epoxide 5, and this occurs in preference to direct attack at the (unlithiated) epoxide 5. In contrast, no reaction was observed with a 2,2-disubstituted epoxide: 1-oxaspiro[2.11]tetradecane (9) [11] being recovered (90%) under the reaction conditions.

The one-carbon homologation of an epoxide to an allylic alcohol (cf Scheme 3) can also be achieved using excess dimethylsulfonium methylide [12,13], although non-terminal alkenes have not been shown to be directly accessible by higher homologation. To examine the latter in the context of the current chemistry, α-methoxyhexyllithium derived from stannane 7 [14,15] was reacted with terminal epoxide 5, which gave the allylic alcohol 8 (79%, E/Z = 73:27, Scheme 4). This organolithium also proved reactive with 2,2-disubstituted epoxide 9, giving allylic tertiary alcohol 10 (72%, E/Z = 82:18).

A trisubstituted alkene 12 (30%) could be formed from terminal epoxide 5, using cyclopropylstannane 11 [16] (Scheme 5); in this case the presence of LTMP was also necessary as epoxide 5 was recovered (>80%) in its absence.

Analogous chemistry to that described above (Scheme 3 and Scheme 4) was found to be possible with a terminal aziridine 17, providing access to the corresponding N-Bus-protected allylic amines 18 [19] and 19 (Scheme 8). In these cases, the amines are formed by preferential β-elimination [20,21] of lithium methoxide rather than BusNLi2.

Synthesis of cyclopropylidene 21 (Scheme 9), suggests a terminal N-Bus-aziridine is capable of being deprotonated by the α-lithio cyclopropane from stannane 11; this contrasts with cross-coupling using the same carbenoid and epoxide 5 (Scheme 5), where the presence of LTMP also proved necessary.

A cinnamylamine 23 could be obtained in a tin-free process (Scheme 10), which utilises the increased acidity of a benzylic ether 22. In this case, the presence of LTMP was necessary as only γ-amino ether 25 was observed in its absence. It was also important to carry out the reaction at −78 °C to avoid a 1,2-Wittig rearrangement of the lithiated benzyl ether [22]; this restricts the reaction to N-Bus-aziridines, as epoxides are not deprotonated by LTMP at such low temperatures. Alongside the cinnamylamine 23, small amounts of the aziridine-derived carbenoid dimerisation product, 2-ene-1,4-diamine 24 [5], were observed. While the reaction profile was not altered on a solvent switch to hexane (23 (62%, E/Z = 61:39); 24 (16%)), the yield of cinnamylamine 23 was slightly improved in hexane (69%, E/Z = 62:38) and the amount of dimer 24 curtailed (8%) by reducing the amount of LTMP from 2 to 1.2 equiv.

The viability of a benzyl ether (Scheme 10) in the carbenoid eliminative cross-coupling offered a straightforward way to probe any effect of the size of the leaving group on stereoselectivity. However, neither isopropyl or neopentyl benzylic ethers 26 and 27 [23,24] led to a significant change in the E/Z ratio for cinnamylamine 23 (Scheme 11).

In summary, we report a new, convergent access to allylic alcohols and amines. The process proceeds by selective cross-coupling of α-lithio terminal epoxides or N-Bus-aziridines with α-lithio ethers. Where 1,2-disubstituted alkenes are generated the E/Z stereoselectivity is modest, and preliminary results suggest the size of the leaving group does not play a significant role. However, the geometry of alkene formation might be controllable by using enantiomerically pure coupling partners [2]. Such terminal epoxides and aziridines are readily available [3,5], while the corresponding α-lithio ethers can be accessed from enantioenriched α-stannyl ethers [25]. The enantiopure variants await future investigation.

The EPSRC and GlaxoSmithKline are acknowledged for a CASE studentship to M. J. F.

© 2021 Fleming and Hodgson; licensee Beilstein-Institut.
This is an Open Access article under the terms of the Creative Commons Attribution License (https://creativecommons.org/licenses/by/4.0). Please note that the reuse, redistribution and reproduction in particular requires that the author(s) and source are credited and that individual graphics may be subject to special legal provisions.
The license is subject to the Beilstein Journal of Organic Chemistry terms and conditions: (https://www.beilstein-journals.org/bjoc/terms) 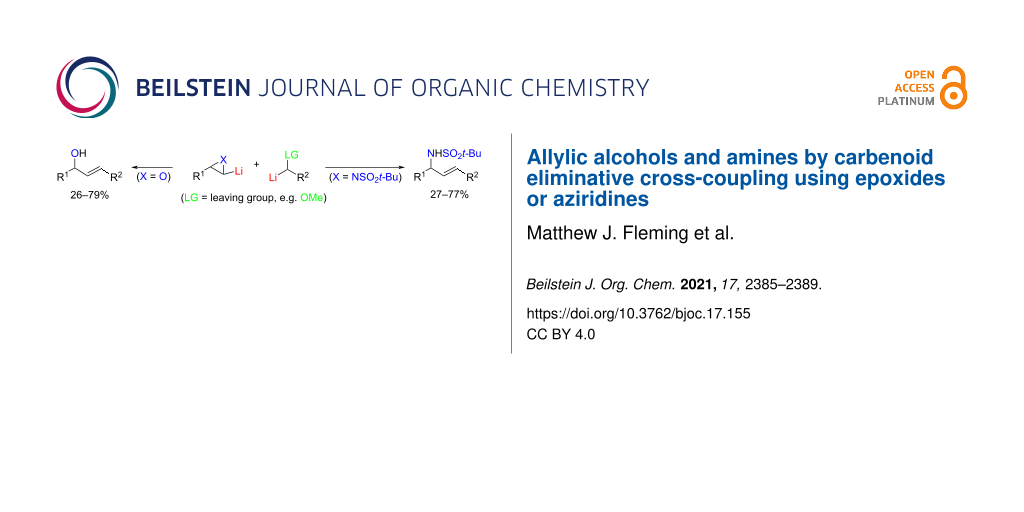