All articles from this author
Qiang Yue


All articles from this author
Ya Li


All articles from this author
Xue-Tao Xu


All articles from this author
Kun Zhang


All articles from this author
Bing-Feng Shi

A copper-catalyzed mono-selective C–H amination of ferrocenes assisted by 8-aminoquinoline is presented here. A range of amines, including bioactive molecules, were successfully installed to the ortho-position of ferrocene amides with high efficiency under mild conditions. A range of functionalized ferrocenes were compatible to give the aminated products in moderate to good yields. The gram-scale reaction was smoothly conducted and the directing group could be removed easily under basic conditions.

Thus far, the transition-metal-catalyzed C–H functionalization strategy has innovated the way to producing ferrocene derivatives [13-16]. Especially, the 3d transition metals, such as Cu, Co and Ni, have been exploited to convert C–H bonds to various functional groups, attributing to the cost-effective and less toxic properties, which render C–H transformations both economically desirable and environmentally benign (Scheme 1a) [17-22]. Early in 2015, the Ackermann group reported the first example of a low-valent Co-catalyzed C–H alkenylation of 2-pyridinylferrocene [23]. In 2017, the Butenschön group reported the ortho-C–H alkylation and arylation of ferrocene derivatives enabled by a combination of Fe or Co catalyst and N-containing directing groups, while an excess of Grignard reagents was used [24,25]. Thereafter, they also reported the Cp*Co-catalyzed ortho-C–H alkenylation of ferrocenes with alkynes [26] and the mono- and di-selectivity could be controlled by the fine-tuned directing groups. Kumar and co-workers developed a Cu-mediated C–H chalcogenation and sulfonation of ferrocenes [27-29]. The use of a bidentate 1,10-phenathroline ligand was critical to achieve mono-selectivity in the chacogenation reactions [28]. Meanwhile, Co(III)-catalyzed ortho-C–H amidation of ferrocene derivatives were also developed by the groups of You [30], Ackermann [31] and Shi [32,33] with 1,4,2-dioxazol-5-ones as versatile amidating reagents. In 2019, the alkynylated ferrocenes were isolated in the formation of alkyne-Cu(I) π-complexes by the Tan group via Cu-mediated C–H alkynylations [34]. Later in 2020, an enantioselective C–H annulation of ferrocenylformamides with alkynes was achieved by the Ye group enabled by Ni-Al bimetallic catalysis and a chiral secondary phosphine oxide (SPO) ligand [35]. Hou et al. also reported the asymmetric C−H alkenylation of quinoline- and pyridine-substituted ferrocenes with alkynes by using an unprecedented half-sandwich Sc catalyst [36]. Very recently, Shi and Zhang demonstrated a Cp*Co-catalyzed ortho-C–H allylation of ferrocenes assisted by thioamide using allyl carbonates and vinylcyclopropanes as allylating partners [37]. Meanwhile, Zhang and co-authors also reported the Co-catalyzed C–H alkoxylation of ferrocenes under nearly room temperature [38].

In comparison, despite the direct C–H amination of arenes with alkylamines has emerged as an efficient strategy to prepare substituted anilines [39-49], the application of this environmentally benign, oxidative coupling strategy to the synthesis of valuable ortho-amino ferrocene derivatives hasn’t been achieved [50], probably ascribing to several challenges. First, unprotected amines are sensitive and unendurable to several oxidants in the presence of transition metals. Second, both amines and the resulting aminated products could coordinate with metal catalysts and cause the deactivation of catalysts. Besides, high reaction temperature could lead to a mixture of byproducts or the decomposition of the ferrocene products. Herein, we described a Cu-catalyzed oxidative C–H/N–H coupling of ferrocenes with free amines to provide mono-aminated ferrocenes exclusively under mild conditions (Scheme 1b). During the preparation of the manuscript of this article, a nice report on Cu-catalyzed C–H amination of ferrocenes directed by 8-aminoquinoline was reported by Fukuzawa and Kanemoto [50]. Notably, our method proceeded under silver-free conditions at relatively lower temperature and in shorter time, providing a complementary alternative to the work of Fukuzawa and Kanemoto.

We initiated our study by investigating the C–H amination of ferrocene carboxylic amide 1a with morpholine (2a) using 8-amonoquinoline as directing group [51-56]. The ortho-aminated ferrocenylamide 3a was isolated in 11% yield in the presence of CuI, N-methylmorpholine N-oxide (NMO) and K2CO3 in DMF (Table 1, entry 1). When the reaction was conducted in MeCN, the yield could be improved to 32% (Table 1, entry 4). Further screening of other oxidants revealed that NMO was the optimal (Table 1, entries 9–11). When the reaction was conducted in neat in the presence of 2-pyridone, 3a was obtained in 36% yield (Table 1, entry 12). However, significant decomposition of the aminated product 3a was observed. Consequently, we exclusively evaluated the reaction temperature and time (Table 1, entries 13–16). To our delight, 3a could be obtained in 80% yield under relatively lower temperature (80 °C) and shorter time (4 hours). To note, this reaction showed excellent mono-selectivity and no diaminated ferrocenylamide was detected. The exclusive monoselectivity is most likely originated from the strong coordination of the amino group, which could form a tridentate copper complex and prevent the second C–H amination [34,50].

Having obtained the optimized reaction conditions, we started to investigate the generality of this C–H amination protocol with regard to modified ferrocenes (Scheme 2). Delightfully, a variety of functional groups tailored to the other cyclopentadienyl (Cp) moieties were well tolerated, furnishing the desired ortho-mono-aminating ferrocenes in moderate to good yields. Alkyl substituents on the other Cp ring of ferrocenylamides only showed slightly effects (3b–d). Notably, the terminal alkenyl group of 3e was well tolerated during the amination process. Weakly coordinating carbonyl groups were also tolerated and the desired C–H amination occurred selectively at the ortho position to the N-quinolinyl amides with acceptable yields (3f–l). Notably, free alcohol was also compatible with this protocol, exclusively giving the mono-aminated product in 73% yield (3m) without the observation of any competitive alkoxylation product [38,57,58].

We then explored the scope of multifarious amines. As displayed in Scheme 3, a range of cyclic amines, such as morpholine 4a,b, piperazine 4c, piperidine 4d–j and thiomorpholine 4l,m, reacted smoothly to give the amination products in 23% to 85% yields. A variety of synthetically useful functionalities, such as ester 4f, cyano 4g and ketal 4i, were well tolerated. Unfortunately, 1,2,3,4-tetrahydroquinoline (2k) was proved unreactive under our conditions, probably due to the steric hindrance. Thiomorpholine (2l) was compatible with this reaction, albeit with significantly dropped yield (29%), largely due to the poison of copper catalyst by thioether. Acyclic amines were also tested and the amination products were obtained in low yields (4n, 18%; 4o, 15%). Unfortunately, primary amines and anilines were completely inert.

Encouraged by the above results, we further tried to synthesize ferrocene–drug conjugates (Scheme 4a). Three amines used to treat psychosis were subjected to couple with 1a and the desired conjugates were obtained in good yields (with haloperidol, 4p, 63%; with buspirone, 4q, 60%; with perospirone, 4r, 70%). This protocol was also amendable to gram-scale synthesis, giving 3a in 50% yield (Scheme 4b, 1.32 g). For synthetic utility, the directing group was conveniently removed by refluxing with KOH in EtOH and the benzyl-protected ester 5 was obtained in 75% yield.

We also conducted several deuteration experiments to shed a preliminary insight into the mechanism. No H/D exchange was observed at the ortho-position of 1a with 3.0 equivalents of CD3CO2D under standard conditions (Scheme 5a). Furthermore, a larger value of kinetic isotope effect (KIE = 2.4) was detected (Scheme 5b). These results indicated that the cleavage of C–H bond was most likely involved in the rate-determining step.

To summarize, we have reported a copper-catalyzed direct ortho-C–H/N–H coupling reaction of ferrocenes with alkyl amines directed by 8-aminoquinoline. Fruitful mono-aminated ferrocenes were obtained in moderate to good yields and the mild conditions offered the possibility to the preparation of ferrocene–drug conjugates effectively. Mechanistic studies indicated that the C–H activation step was the rate-determining step.

© 2021 Jia et al.; licensee Beilstein-Institut.
This is an Open Access article under the terms of the Creative Commons Attribution License (https://creativecommons.org/licenses/by/4.0). Please note that the reuse, redistribution and reproduction in particular requires that the author(s) and source are credited and that individual graphics may be subject to special legal provisions.
The license is subject to the Beilstein Journal of Organic Chemistry terms and conditions: (https://www.beilstein-journals.org/bjoc/terms) 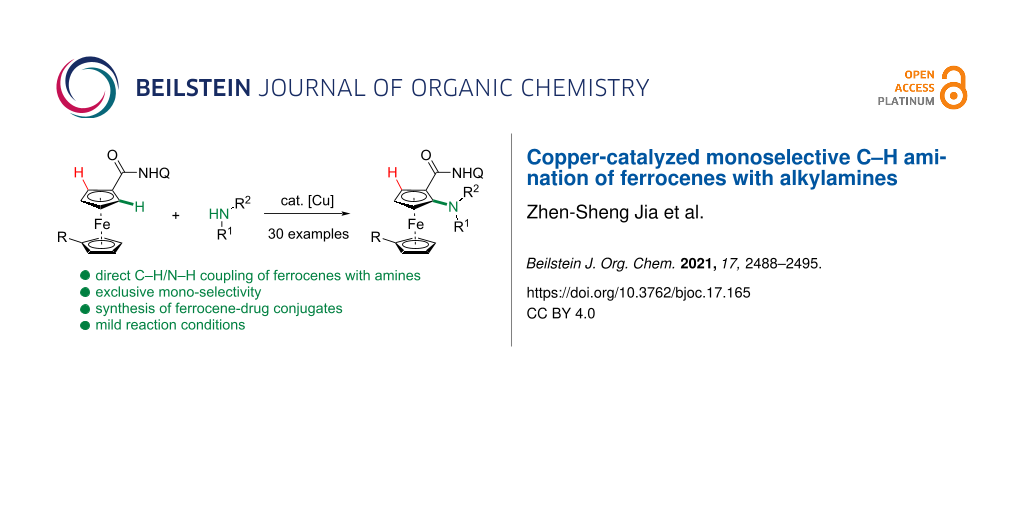