All articles from this author
Yuki Sato


All articles from this author
Yuki Yamamoto


All articles from this author
Shin-ichi Kawaguchi


All articles from this author
Shintaro Kodama


All articles from this author
Akiya Ogawa

The homolytic cleavage of the PV(O)–PIII bond in tetraphenyldiphosphine monoxide simultaneously provides both pentavalent and trivalent phosphorus-centered radicals with different reactivities. The method using V-40 as an initiator is successfully investigated for the regio- and stereoselective phosphinylphosphination of terminal alkynes giving the corresponding trans-isomers of 1-diphenylphosphinyl-2-diphenylthiophosphinyl-1-alkenes in good yields. The protocol can be applied to a wide variety of terminal alkynes including both alkyl- and arylalkynes.

Organophosphorus compounds are an essential class of compounds in catalytic technologies, biochemistry, and materials [1-6]. In particular, in coordination chemistry and catalyst chemistry, organophosphorus compounds such as triorganylphosphines are widely used as typical monodentate ligands for many metals [7,8]. In addition, diphosphines such as 1,2-bis(diphenylphosphino)ethane (Ph2PCH2CH2PPh2, dppe) are employed as bidentate ligands and are effective in controlling important catalytic reactions such as cross-coupling reactions [9-18]. 1,2-Bis(diphenylphosphino)ethylene (Ph2PCH=CHPPh2, dppen) is among bidentate diphosphine ligands having a rigid structure and has increased attention as a useful and effective ligand in coordinating with various metals [19,20]. (Z)-Ph2PCH=CHPPh2 is very important as a bidentate ligand for many mononuclear complexes [21-23]. On the other hand, (E)-Ph2PCH=CHPPh2 acts as a monodentate ligand for mononuclear complexes, but it is highly attractive because a hierarchical structure can be constructed by cross-linking between two metals [24-26]. Considering the characteristics of the coordination form between the (E)- and (Z)-isomers, the development of a synthetic method for the highly selective synthesis of the (E)- or (Z)-isomers is strongly desired [27-30]. Furthermore, since it was reported that the introduction of a substituent into the ethylene moiety has a great effect on the catalytic activity [31], it is considered important to synthesize derivatives having various substituents on the ethylene moiety. In particular, synthetic methods that do not use metal catalysts and reagents are expected to be very effective in manufacturing precision materials and pharmaceuticals [32-37]. To develop metal-free methods for the synthesis of 1,2-bis(diphenylphosphino)ethylenes, we have recently been conducting systematic research on the radical addition of P–P bond compounds to unsaturated carbon–carbon bonds [38-44]. Early studies have found that the radical addition of tetraphenyldiphosphine (Ph2PPPh2) to alkynes using a radical initiator such as 1,1'-azobis(cyclohexane-1-carbonitrile) (V-40) (Scheme 1a) [45] or upon photoirradiation (Scheme 1b) [38] yields vic-bis(diphenylphosphino)alkenes in good yields. Unfortunately, this photoinduced reaction of Ph2PPPh2 was not applicable to alkenes [42]. To change the reactivity of the P–P bond, therefore, when the combination of pentavalent phosphorus and trivalent phosphorus was examined, it was found that the desired radical addition of Ph2P(X)PPh2 (X = O, S) to alkenes successfully occurred [42,43] (Scheme 1c and 1d).

However, in the case of Ph2P(O)PPh2, its absorption is located at a shorter wavelength (λmax = 318 nm) and the absorption intensity is lower than those of Ph2PPPh2 and Ph2P(S)PPh2 [46]. Indeed, the photoinduced addition of Ph2P(O)PPh2 to alkynes required prolonged reaction times (>40 h), and the scope of this alkyne addition was unexamined. Thus, we examined in detail the radical addition of Ph2P(O)PPh2 to alkynes and found that the desired radical addition proceeds efficiently using a radical initiator instead of light irradiation, providing 1-(diphenylphosphinyl)-2-(diphenylphosphino)-1-alkenes (Scheme 1e).

First, a mixture of Ph2P(O)PPh2 (1, 0.6 mmol) and 1-octyne (2a, 0.4 mmol) was irradiated with a xenon lamp. After 40 hours, sulfurization of the addition product was performed to afford the phosphinylphosphination product 3a in 45% yield, confirmed by 31P NMR spectroscopy (Scheme 2) [47].

Next, the reaction was carried out varying the reaction parameters such as the light source and the ratio of the radical initiator (V-40)/2a (Table 1). Using a xenon lamp as an artificial solar source [48,49], 3a was produced in 45% yield (Table 1, entry 1). Using UV light irradiation with a high-pressure mercury lamp [50], 3a was produced in 28% yield (Table 1, entry 2). However, 3a was obtained only in trace amounts upon irradiation with a tungsten lamp [51] (Table 1, entry 3). These results indicate that Ph2P• [52-55] and/or Ph2P(O)• [56-59] radicals were generated by the irradiation with light in the near-UV region. When benzene was used instead of CDCl3 under xenon lamp irradiation, the reaction did not proceed because 1 was less soluble in benzene than CDCl3 (Table 1, entry 4). The radical initiator, V-40, was found to be an appropriate initiator for the generation of phosphorus-centered radicals [38,42]. The ratio of V-40/2a was important to depress the formation of self-polymerization of 2a (Table 1, entries 5–7). The results showed that the best amount of V-40 toward 2a was 10 mol %. Besides, the side product 3a’ is found up to 8% yield under photoirradiation. Considering that in our previously reported radical addition reactions of Ph2P(S)PPh2 and Ph2P(S)P(S)Ph2 to alkynes [44], the E/Z ratios were about 9:1 and 8:2, respectively, it should be noted that the present addition of Ph2P(O)PPh2 1 to alkynes afforded (E)-isomers with an excellent stereoselectivity (greater than 95:5) [60].

The phosphinylphosphination of various terminal alkynes 2 with Ph2P(O)PPh2 1 was conducted under the optimization conditions (Scheme 3). Terminal alkylalkynes 2a, 2b, and 2c reacted efficiently with 1 to give the corresponding adducts 3a, 3b, and 3c in moderate to good yields (67%, 71%, and 83%, respectively) with excellent stereoselectivity (E/Z = 95:5–99:1). Terminal alkylalkynes with chloro (2d), cyano (2e), and ester (2g) groups provided the corresponding adducts 3d, 3e, and 3g in 33%, 41%, and 54% yields, respectively (E/Z = 94:6–100:0). In sharp contrast, the presence of a hydroxy group inhibited the desired phosphinylphosphination (see, alkyne 2f), probably because of the decomposition of Ph2P(O)PPh2. Furthermore, an electron-deficient alkyne such as methyl propiolate (2h) failed to provide the desired adduct (3h) [61]. 3-Phenyl-1-propyne (2i) and cyclohexylacetylene (2j) gave 3i and 3j in 41% and 65% yields, respectively. Again, an excellent stereoselectivity was observed. Moreover, terminal arylalkynes 2k–o were also tolerated under the conditions to afford the desired adducts 3k–o in moderate to good yields with high stereoselectivity.

We also investigated the phosphinylphosphination of some internal alkynes, 2p and 2q, with Ph2P(O)PPh2, but did not afford any adduct (the starting alkynes were recovered unchanged) (Scheme 4). This is most probably because the internal alkynes are sterically bulkier than terminal alkynes, and therefore, the addition did not proceed (Scheme 4, reaction 1). On the other hand, reaction 2 in Scheme 4 indicates an example of the phosphinylphosphination of a terminal alkyne. The detailed analysis of the products in this reaction revealed the formation of 8% of the addition product 3n’, which might be formed by the addition of Ph2P• to the alkyne. Noteworthy is that the capture of carbon radicals occurred only at the trivalent phosphorus site of Ph2P(O)PPh2. Therefore, the initiation step might also proceed via the attack of the carbon radical generated from V-40 at the trivalent phosphorus site to form Ph2P(O)• selectively.

With this information in mind, a plausible reaction pathway is shown in Scheme 5. Decomposition of the radical initiator (V-40) generates In•, which attacks selectively at the trivalent phosphorus atom of Ph2P(O)PPh2 to form Ph2P(O)•. Then, Ph2P(O)• adds to the terminal carbon of an alkyne to afford the carbon-centered radical A1. Radical A1 is captured by Ph2P(O)PPh2 to provide A2, regio- and stereoselectively [62].

In conclusion, a highly regio- and stereoselective phosphinylphosphination of alkynes with Ph2P(O)PPh2 has been successfully developed. The radical initiator V-40 can be used to selectively generate Ph2P(O)• as an important species to regioselectively afford 1-phosphinyl-2-phosphinoalkenes. This method can be applied to a wide range of terminal alkynes. We believe that the excellent stereoselectivity to give (E)-isomers is effective for the stereoselective synthesis of (E)-bis(diphenylphosphino)ethylenes.

General procedure for the phosphinylphosphination of alkynes

Ph2P(O)PPh2 (1, 0.6 mmol) and an alkyne (2, 0.4 mmol) were placed in a Schlenk tube with CDCl3 or benzene (super dehydrated) under argon atmosphere. V-40 was added to the mixture, and then the reaction was heated at 80 °C and stirred for 22 h. After the reaction was complete, sulfur (3 equiv) was added under inert atmosphere and then the mixture was stirred at 60 °C for 6 h to provide the stable adduct 3. The purification of the products was performed by silica gel column chromatography using isohexane/MeOAc as an eluent.

D.P.T. is grateful for the support of the Japanese Government (Monbukagakusho: MEXT) Scholarship. This research was supported by JSPS KAKENHI (B, 19H02791), (B, 19H02756), and (19K17746), from the Ministry of Education, Culture, Sports, Science and Technology, Japan, and by Kyoto-NAIST Advanced Nanotechnology Network.

© 2021 Tran et al.; licensee Beilstein-Institut.
This is an Open Access article under the terms of the Creative Commons Attribution License (https://creativecommons.org/licenses/by/4.0). Please note that the reuse, redistribution and reproduction in particular requires that the author(s) and source are credited and that individual graphics may be subject to special legal provisions.
The license is subject to the Beilstein Journal of Organic Chemistry terms and conditions: (https://www.beilstein-journals.org/bjoc/terms) 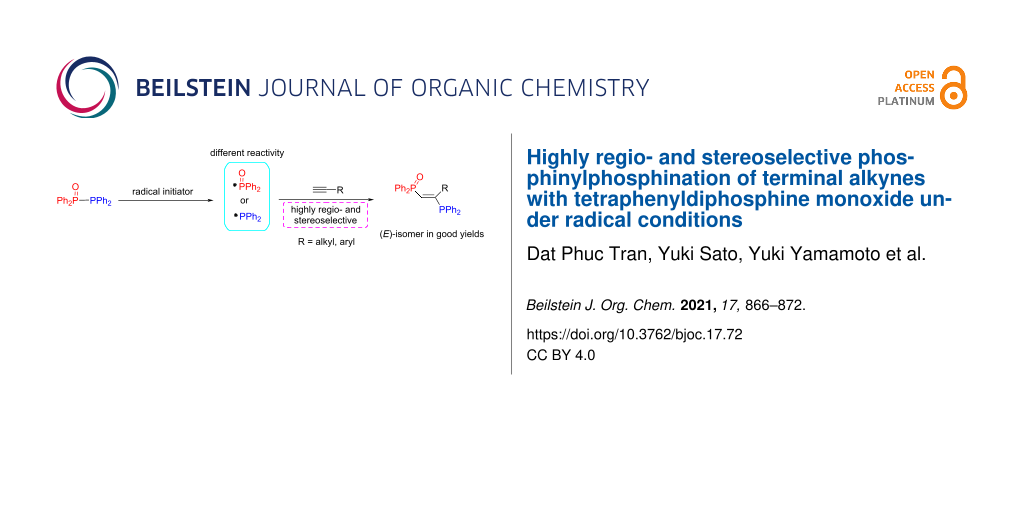